Yes I like attacking myself thank you for asking

A story surrounding 5 special humans who have a job to help human kind.

late posting for the trend of no nuance november. but decided to do one for haikyuu. WARNING: these is MY opinions, you’re free to disagree and agree. but sending hateful messages towards what i think is unacceptable. ty.

i rlly posted this 12 am on decemeber first goodbye, its 10 pm here sigh.

➣ hinata is not an innocent child, he’s a highschool boy for crying out loud.

➣ fanon kuroo is some sex god fuck boy while “canon” kuroo ONLY talks about science and is a nerd for it. stop labeling him with one personality trait.

➣ bokuto isnt a big crybaby dummy, stop reducing him to that title. HE HAS A VERY COMPLEX CHARACTER WHO IS EXTREMELY TALENTED!

➣ ennoshita, narita & kinoshita are underrated and need more love than they get.

➣ belittling akaashi as bokuto’s best friend or his “babysitter” is just not it.

➣ tsukishima is one of the people with the greatest character development.

➣ hating oikawa for almost punching kageyama is ridiculous, HE HAD A REASON THATS NOT HATRED.

➣ adding on, youre hating on him for almost hitting him when kageyama literally THREW hinata across the gym.

➣ hating on other ships that you don’t ship is unacceptable and useless, unless it’s illegal.

➣ stop babying yamaguchi and asahi! both are just anxious!!

➣ if you ship the miya twins together,, just why..?

Make it to me by yamsfreckles

Rating: Teen And Up Audiences
Archive Warning: Creator Chose Not To Use Archive Warnings
Relationship: Hinata Shouyou/Yamaguchi Tadashi
Characters: Hinata Shouyou, Yamaguchi Tadashi, Hinata Shouyou’s Mother
Additional Tags: Alternate Universe - Soulmates, Soulmate-Identifying Marks, Implied/Referenced Child Abuse, Implied Childhood Sexual Abuse, Implied/Referenced Self-Harm, no one dies, Generally Happy Ending
Summary: “Hinata Shouyou was a reckless child. Paired with being involved in soccer for most of his elementary school days, he often came home covered in bumps and bruises much to his mother’s chagrin, though luckily he usually healed quickly. Occasionally though, occasionally his bruises took a lot longer to heal. Always the darkest ones and always the ones he never remembered receiving.”

YamaHina Soulmate AU where whatever marks appear on your skin also show up on your Soulmate.

Crows and Sunshine by FutureThorn

But that’s not what happened.

With some help, he decides to walk over and figure it out.

The ginger seemed startled by his voice, jumping and staring at him with wide eyes. The brunet haired male felt his throat go dry at the expression on the stranger’s face.

What a Shock by GalacticSaz

Rating: General Audiences
Relationship: Hinata Shouyou/Yamaguchi Tadashi
Characters: Hinata Shouyou, Kageyama Tobio, Tsukishima Kei, Karasuno Volleyball Club, Yamaguchi Tadashi
Additional Tags: Fluff
Summary: During one night of the training camp, Hinata hears a noise. He lays stiff as he waits for something to happen. What does happen is a shock. Why is someone spooning him? And who?

In your first approximation, Yamaguchi Tadashi is almost unassuming.

He sits two desks away from you at the seat near the window, his tall, lanky frame in a slouch as he tries to make himself appear smaller than he is. He speaks gently, often needing to be asked to repeat himself, and his lunches are spent with Tsukishima Kei (which are the only times he doesn’t speak so gently).

You almost forget he’s there sometimes.

Even though I’ve already used this prompt, Dom Yamaguchi is my fav thing to write. ❦

The two of you had been studying for what seemed like hours at this point, and your brain was going hazy from the sheer amount of numbers, facts and points that were floating around in your brain. You groaned softly, flopping your face down into the textbook you were currently highlighting in hopes that the information would just merge into your skin

Yamaguchi turned slightly in his chair at your sound, a soft chuckle leaving his lips when you turned to him, cheeks puffed out in a frustrated pout. “What’s the matter, Bunny?”

“I think my brain is melting.”

He shook his head at that, the smile staying on his freckled face. “Oh don’t be so dramatic, finals haven’t been too bad so far.”

“I think I’m losing sense of time Yams, how long have we even been studying anyway? Hours? Maybe it’s been days…”

Yamaguchi wanted to listen to your rant, it was light-hearted and cute and really was a good distraction. But as his eyes travelled over your form, looked at the bit of skin that showed between your skirt and shorts, the way your lounging shorts rode up just a little too high on your rear.

Yamaguchi bit his lip, you were too attractive for your own good.

“I just need to relieve a little stress I think.”

Perfect, you handed him the opportunity. Leaning back in his chair a bit the male patted his thigh, his eyes darkening a bit as ideas began to swarm him. “Well then C’mere Bunny, you can sit on my lap until I’m done working.”

You were a bit surprised but the recommendation, but from the way he looked at you, to the way his tongue slowly licked along his lower lip you had a notion that it wasn’t a request. With answering you got up, a bit of flush rushing to your cheeks as you took a seat between his thighs, back pressed to his chest. Yamaguchi let out a pleased hum, his lips coming dangerously close to your ear while one palm slide along your waist, sneaking along the hem of your T-shirt.

“You need a stress reliever bunny? Why not let Daddy help you hm?”

You had to hold back the little gasp at his tone, your body melting into his touch as you felt the warmth of his palm on your bare skin, fingers creeping along your stomach to snake under the hem of your waistband. You mewled when his other hand pulled one of your knees, bringing your legs further apart before it went back to rest on his laptop.

“B-But what about your studying…” You murmured, goosebumps rising on your skin as his lips settled against the crook of your neck. “Don’t worry about me Bunny, just look at the camera and look pretty for me will you?”

You were confused by his choice of words before your eyes fluttered towards his laptop screen, a gasp actually escaping you this time as your saw yourself through the webcam, cheeks red and Yamaguchi’s hand buried in your shorts. You didn’t have time to question him before his thumb pressed circles into your clit, one finger easily slipping between your folds to allow moans to slip past your lips.

“That’s it Bunny,” Tadashi spoke softly, eyes glued to your already crumbling form in the webcam as his finger slowly eased in and out of you, watching the way your eyes fluttered and your back arched so perfectly to his touch. A second finger was slid within you with ease, the feeling of your arousal already dampening his knuckles. “Daddy loves your pretty pussy~”

please, I love punk yamaguchi so much

#haikyuu, #yamaguchi tadashi, #my art, #yes i know i haven't posted art in like 2 years but whatever, #i have so much art i could post but idk if anyone wants to see it
3 notes · See All
mari-marcelineText

hinata: why do you like tsukishima so much, he’s such a dick

the one that inspired them all. a little late for thanksgiving but just in time for christmas to start kicking in. maybe i’ll do a friendsmas sequel type thing to this mini series

honestly, daichi was already preparing for the worst when suga convinced him to host friendsgiving for the boys’ vbc with a swift chop to the side and an exclamation of “negativity, begone!” but somehow they managed to surpass his expectations.

the troublesome two looked at each other as their faces paled visibly even in the dim lighting of the hallway, matching whispers of “oh shit.”

a/n: i love me an emotionally constipated 6′2″ blond middle blocker with glasses

fun fact: whenever tsukishima has a day where his emotions get the best of him, he would invite yamaguchi over and the two of them would just lay around in tsukishima’s bedroom listening to his music. some days, tsukishima doesn’t even have to text yamaguchi, he just knows. today might be one of those days. 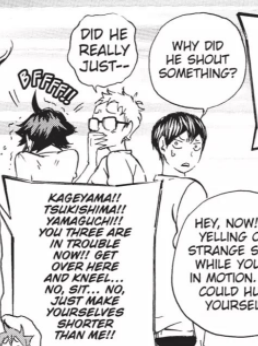 can you imagine yams when his bangs grow out too long and he can’t get a haircut, he uses your hair clips to hold back his hair during practice 🥺 you get him all sorts of designs and shapes n they just compliment him so nicely i bet!!

send me your soft dating headcanons of the haikyuu  characters!

“Tch,” checking his wrist watch again, Tsukishima let out an annoyed sigh as he waited for his delayed flight to arrive. Rolling his luggage lazily between his legs, his eyes wandered around the busy airport, hoping to occupy his mind. He should have been on a flight back to Miyagi 2 hours ago, but the storm in England caused a delay in all flights. He was visiting the British museum along with others around the country.

Despite the soft ticking sound his wrist watch gave off, another clock was ticking in the corner of his vision. Usually the time was counting down at a slow rate, but for some reason, his clock began decreasing at a faster pace.

A clock that, once reaches zero, will reveal your soulmate.

But, Tsukishima didn’t care. All that was on his mind was leaving the overcrowded airport and back to the comforts of home. Even if he happened to meet his supposed “soulmate” right then and there, it would get in the way of his overall plans and possibly further delay his flight.

And a change in his comfortable schedule was something he didn’t want to risk. All for a significant other that everyone longed to meet in their life? No thank you.

Still, the decrease in time intrigued him. Sooner or later those glowing blue numbers will reach a bright, golden zero.

Shaking his head to clear his thoughts, Tsukishima returned to rolling his luggage along the tile floor. Before long, the voice of a lady was heard over the speaker, announcing the continuation of flights to Asia. Tsukishima jumped to his feet and reluctantly walked to join the moving crowd, walking in multiple directions. Thankfully due to his height, he could easily see over the people and find the terminal to his flight.

Just a little closer, he thought, as his struggle against the current began to increase. Annoyance started to creep as the constant pulls and pushes of people’s bags moved him around. If only he wasn’t such a “bean pole,” he could’ve used some muscle to shove his way through the mass.

His struggle finally paid off as he reached the entrance to his flight, but the ticking pattern of his clock on his vision suddenly distracted him. He watched in disbelief and slight astonishment as the numbers began decreasing rapidly.