While visiting the mortal realm a cursed is placed on the two young gods. After countless lives have passed, they have one last chance to defeat the ancient evil and break the curse or be doomed to the darkness for the rest of eternity.

P.S. I suck at summaries

So I got a second screen and I just could not help myself. No regrets.

So I’ve been thinking about the partner selection process during the initiation and I have a theory. What if Ozpin had planned the platform launch so that everyone would land near another? Like What if Ruby and Pyrrha were supposed to be partners and Jaune and Weiss were supposed to be partners. Ruby and Pyrrha both walked/sprinted to where Weiss and Jaune were. And Jaune’s fall was stopped by Pyrrha’s javelin. But imagine if Pyrrha didn’t stop him and Jaune literally flew to Weiss and she caught him(Cause she’s nice like that). Thus cementing their standing as partners.

Now the reason why I think about this is because when you look at Weiss as a fighter and a character, while she has made a mold in team RWBY, she lacks the endurance, skill and ability to fully integrate into their battle plans and has to quite literally change a lot about herself to fit in with her team.

Likewise Pyrrha doesn’t fit in with team JNPR. She’s a four time champion, top of her class, perfectionist teamed up with three average fighters who while deadly together, are near useless when Pyrrha is with them due to her being so above them. And she too has to change a lot about how herself in order to appease her team during confrontations.

But imagine if Weiss was on a team with Jaune Nora and Ren and Pyrrha was on a team with Ruby Blake and Yang. Imagine how well they’d fight. Imagine how well they’d get along. Imagine how’d they would be able to not only stay true to themselves but also grow naturally without feeling obligated to change themselves based on bad reactions of their teammates. Like you think Weiss would just give up and let Jaune wallow in pity on the roof without support after she learned that his childhood was similar to hers? You think Pyrrha would let Blake run off without giving chase to first find out what’s going on with the bleeding heart she has?

There’s so much potential here. Not only would it change so much of the story, it might actually end up fixing a lot of the bad things that happen.

yang: you wanna kiss me so bad it makes you look stupid

Oscar, texting in the qrwbyjnor group chat: Guess who just got kidnapped 😎 ✌️

Ruby: YOU GOT WHAT

Jaune: I swear we can explain

Nora: YOU HAD ONE JOB 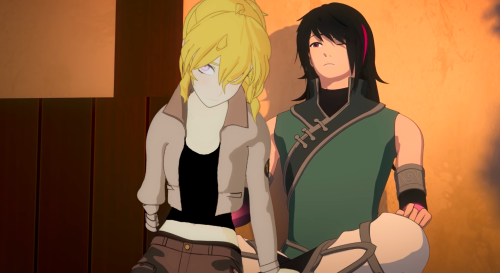 The gang’s back but things aren’t as peaceful as Blake thought they might be.

Yang: My sister is at that very special age when a girl has only one thing on her mind.

Ruby: how the hell was I supposed to know Weiss was into me??!??

Yang: Remember that time she said that she doesn’t want to talk about cute boys and paint each other’s nails?

Blake: Her gaydar has yet to fail.

Blake: You’re sitting on my lap.

Blake: Literally everything you said was innacurate.

Yang: Blake… I don’t know if you know this but… if you wake up early… there’s so many more hours in the day

Blake: But God, at what cost?