When you want tumblr friends, but you remember you’re awkward so you just sit there like:

Y'know, despite finding labels I feel are right and describe me well, this little voice in my head won’t stop questioning. It’s very annoying and awful for my self worth, so I’m going to make list of arguments against the most common thoughts. This is for my personal use to look back on whenever I start to doubt again, or for anyone who might have similar struggles I guess.

Just as a reference, I identify as nonbinary, aromatic, and bisexual. A lot of the things used to invalidate such labels seems to revolve around a mixture of things. Like anything internalized due to societal standards and what I grew up expecting to be normal. Also, other LGBT members and their exclusion for whatever arbitrary reasons. Even those who are anti-LGBT and the arguments they make. Like I know that I shouldn’t care what other people think, and I kinda don’t, but it does effect how I think about all of this.

Anyway, since I tend to be really ramble-y, I’ll put everything under the read more link (nearly 2000 words, oof). Also as a kinda warning for transphobia, homophobia, and the likes. All of the words below are just me going off from my heart, so I rationalize with triggering talking points quite a bit. The last thing I want is to trigger someone, so please stay safe.

#nonbinary, #aromantic, #bisexual, #positivity if you squint maybe, #lgbt, #do i only come out to my friends through tumblr?, #yeah pretty much, #did the same in telling them im nonbinary, #and now this time with aromantic >:3c, #im super frikin tired now, #hope i didnt miss anything pfft, #sorry if none of this makes any sense, #ive been working on this for far too long
1 notes · See All
ask-whitepearl-and-stevenText

Look, I get it. Some cultures have this thing where it’s standard to refer to people as ‘sweetheart’ or ‘love’ or whatever. Some people have made a habit of it.

But this is the internet. The entire damn world isn’t Alabama. In MANY parts of the world, casual familiarity from strangers makes people VERY uncomfortable.

Unless you have spoken with the person extensively and know their verbal tics and have built up a repertoire, you need to STOP casually calling people ‘baby’ or ‘bitch’.

These are simple social boundaries.

Edit because it’s necessary: Some of you are saying “I’m not gonna change my speech habits, it’s a harmless cultural thing.” and obviously that’s up to you. I admire that - hanging on to your own identity, not being shamed of how you speak. There’s obviously weight to that.

But I also am seeing JUST AS MANY people in the tags/notes going “yes, this makes me EXTREMELY uncomfortable when people do this, I’m weirded out and I don’t know how to address it” so I just want to mention that even if it’s isn’t a huge deal, it isn’t technically ‘harmless’. It does affect other people negatively.

If you don’t care about it, then that’s on you, it’s fine. But as a twice-over immigrant who’s had to adjust my cultural  norms to communicate with local people several times back and forth, I’m giving you a little bit of side-eye.

It’s not asking you to pretend to fit in. We’re not asking you to move mountains or change your entire ass accent. It’s literally just the acknowledgement that outside of your personal bubble of homegrown culture, your habits MAY be discomforting to others. It’s just common courtesy.

#psa, #Ive met those white people who move to Japan and start hugging people as a greeting, #and everyone is SO uncomfortable, #and is that technically harmless?, #yeah pretty much, #is it polite?, #not really, #lets at least pretend to care
1K notes · See All
soft-wooText

Rules: you can usually tell a lot about a person by the type of music they listen to. Put your favorite playlist on shuffle and list the first ten songs, then tag ten people. No skipping!

Thank you to Kylee ( @femstyles ) for tagging me.

I don’t exactly have playlists so I’m just gonna put my music on shuffle and see what happens.

6. Lingerie - Lizzo (I don’t even think I’ve listened to this song, I just have it)

7. Nothing To Lose But You - Three Days Grace

i tag the following people (if you don’t want to do this, or have already been tagged ignore this, but just know you’re one of my favs 💞🥴):

Picked up a New Yorker magazine and I swear to god, opened it directly to this page.

I feel so called out right now. 😂

#writer stuff, #yeah pretty much
45 notes · See All
unfortunatematchupsAnswer
Oh alright!! Thank you so much! Tumblr has been eating my asks lately... 💕 So I wanted to make sure! 💕

Every show I ever watch.

Always be hurtin’ that one character.

#is this about lloyd?, #yeah pretty much, #but this is also about little cato, #and steven, #and like every single fucking thing i've ever watched, #leave the kids alone damnit, #real close to going batshit over here
25 notes · See All
clearkneemomjeansText

What if Tarrare didn’t eat the infant?

What if he was just giving the infant a vibe check and the infant simply failed?

#i’m just saying, #am I going to hell for this?, #yeah pretty much, #vibe check, #tarrare, #tarrareposting
46 notes · See All
sinzenxsekaiText

“Fear me, fools. I am the Demon King of the Sixth Heaven,  the dreaded, hated, yet totally lovable Oda Nobunaga. Surely you have heard of me and my ruthless, bloody campaign to unite all of Japan? The burning of Mt. Hiei and everyone in it? The carnage I wrought? The blood I’ve spilled? I marched my forces all through the country and burned it all to ash…
You should fear me. Tremble, even. For I have cast aside humanity and allowed my sinful existence to become that of a demon’s… be afraid.”

“I’m Oda Nobunaga, the Demon King of the Sixth Heaven… and I’m the kinkiest bondage-loving slut you’ll probably ever come across. Please tie me up, gag me, render me utterly helpless and lock me away as your bondage slave and make me and my body yours with whatever sorts of kinky plans you have in store for me while talking dirty to me while helpless and other weird stuff you wanna do to me. Oh, is all that rope for me? You shouldn’t have. I’m truly flattered~”

bunnylexicon replied to your post: …I could put a giant labyrinth in my fantasy world…

eden circa 2030 in her survivalist bunker

This song triggers the feral inside me

#Each time I listen to this I feel like I'm transforming into a werewolf, #And I'm about to head into the city to bounce on some dicks all night, #Yeah pretty much
1 notes · See All
mysmedrabblesAnswer
u have a very killmonger 'is this your king' energy, while they have a beginning of movie nakia, just... amused energy

congratulations you broke us both down to our bare essentials 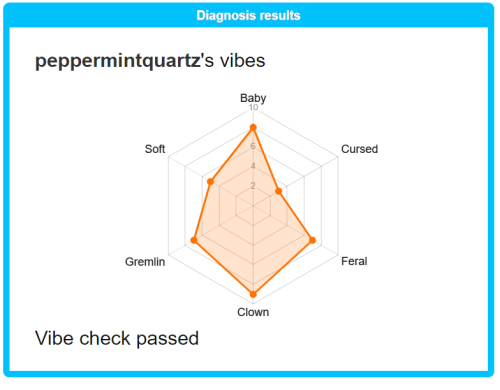 #yeah pretty much
9 notes · See All
Next Page