thank youuuu this is very very sweet :D i worked on the last chapter for a long time so i’m extremely happy about the feedback i’ve been getting! i rly appreciate this, means a lot to me <3

IT CAME IIIIIN!!! I STILL HAVE TO WAIT TIL CHRISTMAS!!

Haidoumo! This Is R1 from Ribbon Miku Boutique!

we currently need some fresh ideas for our upcoming dress making for the season , This is R2 .

give us four colours and one decoration of your most liking!

you might be chosen as a model to present the new season of your ideas !>^<

This is askribbonmiku , check us out!

!!! Thank you so much! I love me some family nonsense, so I think I will write more! Thank you for your kind words! I hope you have a good day! 🌹🌹🌹

Handwriting ask: 12) the first 5 words that come to your mind

next up is mister “i’m gonna sing a whole song about wanting to stay in prison.” we love yancy.

ahwm is loose on dates so idk man there really isn’t any.

the s/i of the hour!

- she’s here, of course, for trying to steal that macguffin box and failing

- bit of a weirdo but embraces it

- failing at basically everything she attempts.

- she secretly didn’t like her robbery accomplice too much and was rather glad when he was taken care of.

- king and queen of happy trails

- no questions, they’re the bosses.

- mutually bosses and hopelessly falling for each other.

- they mean it with love.

- everyone is trying to get them together.

- honestly the warden seems to be in on it at this point.

- “and today for work detail we have… oh would you look at that. rachel and yancy! hop to it!”

- they seem to be oblivious to it though.

- they’re both trying to flirt to get the other one to realize and it just won’t work.

Here’s something that nobody asked for: how I make my Lightbulb asset :3

fav song: shoot, uh. let’s say “Hey, Runner!” by The Arcadian Wild bc good lord being at the bottom of the corporate crab bucket is fucking exhausting and this song is a constant mood

Update tiiiiimeeeeee gonna fuckin finish this chapter of Keys within the next few days and once it’s done, the arc 9 cover and my week 1 submission are gonna get drawn. I was gonna get one more Keys chapter out before going to UF buuuut, I got that itch… so I think we may see the start of arc 9 sooner than expected…

Random OC I made just now, also sorry for not posting in a while, school’s coming back up and I’m nervous 😅 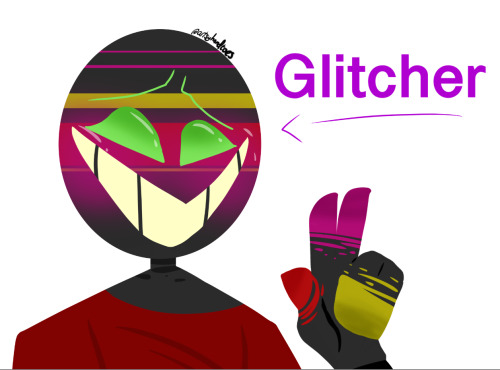 down from the mountain

The heightened tension of trying to learn and teach and understand and convey everything in a timely and acceptable manner was overwhelming to Cas to say the least. He was always coming and going looking like some magnet for static electricity; occasionally he wandered the hallways as if caught in a lightning storm with his tie all twisted and his hair standing up in messy tufts, his cheeks flushed with color and his shirts a disgrace as if he’d gotten dressed in a dark barn.

It was a rough discussion the main administration had decided to go through with in regards to Cas. He had a responsibility to teach these students and young adults about the unique specialness of his quirk. An “angel” quirk. But it was like the refused to comprehend that Castiel himself hardly understood his own quirk yet; or the fact that years or trauma influenced it and not only that, but dangerously. He’d excused himself from the board room when the meetings had concluded; but Sebastian had seemingly taken an interest and followed closely after him. Observing the way his eyes sparkled like waves in a glass jar or white fire and his shoulders rose and fell as if he was taking into account the span of unseen wings. Whatever it was about Castiel, Sebastian was inclined to know it. Ciel had warned him more than enough times to leave that guy alone; mainly due to the volatile threat his sister Vitto was to them both. A feisty firecracker.

Sebastian caught up to Castiel with ease, long strides carrying him with smoothness right next to the man. “Tough crowd in there, wouldn’t you say?” He set a hand on Castiels shoulder and pulled back instantly; it was like he could feel the field of energy vibrating off Castiels body. “Castiel?” He almost felt the far off look in Cas’ eyes, but it didn’t seem to shake him from it. “Castiel, come here, why don’t you sit down and catch your breath. The meetings bullshit anyway. We all have quirks we’re trying to figure out. They shouldn’t have put that much responsibility on you for yours. Come on, come over here.” He grabbed Cas by the elbow and tugged him over towards the chairs lining the windows.

“I don’t know how I’m going to teach others with this quirk how to control it. I— I don’t even understand it. I don’t want it I never asked for this. I don’t want it-.” The panic was building to a crescendo and the air in the hallway was tingly and made Sebastian’s ears ring. He felt lightheaded and choked for air as Castiel spiraled into panic. “What if I hurt someone!?” The burst of electric grace seemed to crackle and burst out of Cas like a bird hitting a force field. Sebastian slid halfway across the hall before slamming into the wall and laying there lifeless. Everything went to hell. It felt like that anyway.

Ciel was racing in, the fire alarms were blaring, the emergency lights flashing in the almost pitch black hallways even with the windows broken out. Hiding in the dark with grace and elegance Vitto wasn’t far behind, quickly at Castiels side, kneeling down next to the chair Cas was seated in with her hands gripped over Castiels hands. “Cas? Cas look at me. Are you ok, what’s wrong, what happened?” She kept asking as Cas stared in horrified shock at what he’d just done to Sebastian. His eyes were bright and watery; tears attached to his lashes as he tried to speak; tried to explain what happened to the man. “Look at me, are you hurt, are you ok?” She was cupping his face, pushing his hair around and looking for injuries from the glass that had shattered around them leaving his face scratched and splashed with blood. Though he’d deny any of it was his even with the gaping gash of his eyebrow. “Look at me Castiel.” She finally got him to look at her, her warm dark tendrils of shadow twirling around him, even cradling his cheek like a hand, a ghostly black finger of essence trying to assess the brow injury.

“What the hell is wrong with him!?” Ciel’s hand wrapped angrily around Vitto’s wrist, yanking her around to face him.

“Ciel listen, calm down you’re yelling is just going to panic him more I can explain, he didn’t mean to it was an accident—.”

“Him!” Ciel guffawed, his eyes swirling like a toxic wash of seaweed and waves. “You think I mean that— that monster you call a brother?” He screamed as Sebastian tried to stay sitting up against the wall, his face bloody and his wrist turned entirely the wrong way. “What did that— that thing do to my brother. You could’ve killed him, you could’ve killed my brother!” Ciel began berating Cas, his threat triggering the defense in Vitto as she seemed to rise up on a cloud of black swirls and tendrils above Ciel.

“Don’t you ever-.” She grabbed Ciel by the collar and yanked him so he was nose to nose with her, her sharp teeth gleaming with each flash of the emergency lights. “Talk to my brother like that again. You have no idea who he is- you have no idea who you even are and you certainly have never met anyone of my caliber. You have no idea what I can do to you so before you ever threaten my brother again you’d better learn who the hell i am.” She shoved Ciel against the wall, her steps fluid in the liquid black. “Your brothers injuries,” she glanced to Castiel just to make sure he was alright, her heart sinking out of her chest into the pit of her stomach when she saw he was gone. Turning back to Ciel and Sebastian who Ciel was forcing to his feet. “Bring him to our home, it’s the yellow house on the corner of Post Oak. I can fix his wrist. Do not test me.” She warned, leaving as if the flickering of lights was nothing but a theater effect.

Cas was a mess by the time she got back to the house. He’s secluded himself; hid himself away in the small shed she kept all her flower pots and gardening supplies. She used her essence to slowly waft black lines of warmth over his shoulders and an arm as she stepped into the quiet shed. She could feel the cracklings of light and energy beaming beneath him, but waited for him to speak before she would. “Go away.” His voice echoed a pout and she smiled. “Go away, Vitto! I mean it.” He demanded, but it stil fell flat. “I don’t want to be a teacher anymore. I’m not any good at it. I almost killed that man.”

“And?” She asked, pleased when she heard Castiel huff in annoyance. “They’re coming over for dinner. You might want to put clothes on… or at least pants.” She plucked a dandelion from the slots of wood near him and set it down gently beside him. “Get dressed, ok?” She watched him nod before deciding to go back in and prepare for their arrival.

“Voyage” (watercolor, 9x3.5in). What do you think is going on in this painting? It’s still kinda connected to the POALOF fan comic sidestory ‘To Duel is to Dance’. ⚔ Lemme know in the comments and, in 2 days I’ll give you the answer! 😁 Heehee I wonder if anyone can figure this out^^

Edit: Ok! The answer is “Captains Marianne and Héloïse have decided to make peace and set sail to a little summer getaway to the Greek Isles of Lesbos”. uwu

— stop making me think about you ❀