Based on the assumption that Yelana/Yelena is the grandmother of Honeymaren and Ryder, those are my designs for Yelana/Yelena’s husband (left) and son (right). I am not yet sure about colors, so I’m leaving them vague. 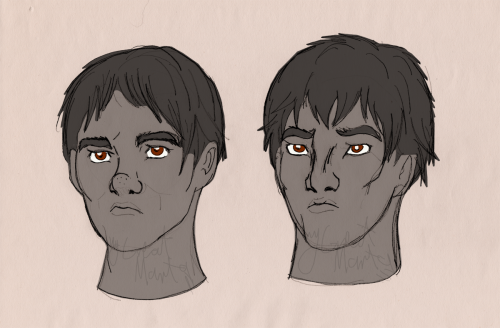 Upon consideration, Yelana/Yelena/Yelaena is most probably not a blood relative of the previous Northuldra Leader. They look absolutely nothing alike. Physical resemblance does not always indicate kinship – especially not in animated movie – but assuming it does, Ye-lady is more likely to be her predecessor’s daughter-in-law, niece, or a much younger wife rather than daughter.

On the other hand, there is some resemblance between the old leader and Ryder. If Yelana/Yelena/Heleainná married the previous leader’s son, then her grandchildren (I firmly believe Honeymaren and Ryder are her grandchildren) could have some of their great-grandfather’s traits.

Again, this is an animated movie and physical resemblance does not have to indicate anything. Still, playing with possibilities is fun :-) 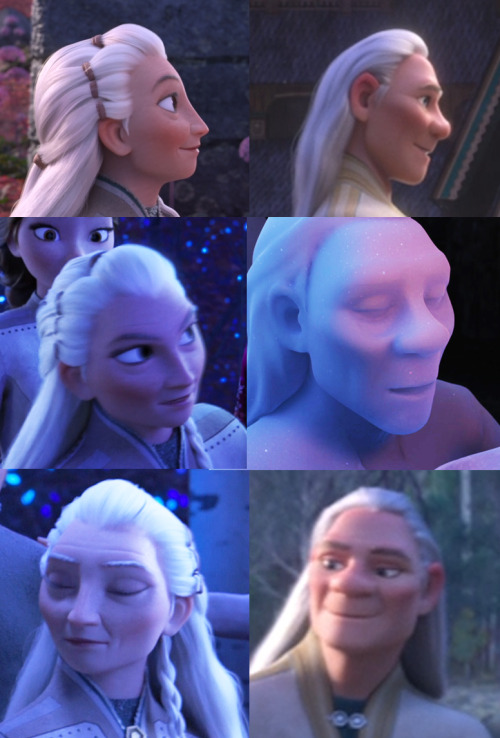 #frozen, #frozen 2, #northuldra, #yelena, #yelana, #ryder nattura, #ryder, #honeymaren, #northuldra genetics, #northuldra family, #northuldra leader
61 notes · See All
incorrect-frozen-quotesChat
Yelana: Alright, now, everyone pay attention. I have an announcement to make and I only have a minute.
Mattias: Why? Are you in a hurry?
Yelana: No, I was referring to your relatively short attention spans.
#frozen 2, #yelana, #lieutenant mattias, #frohana, #incorrect frozen quotes, #submission, #clearbluewaters, #source: frasier
225 notes · See All
greatmartaText

What do you think is Yelana’s relation to the Northuldra Leader from the beginning of the movie?

Comparing their pictures, his from 34 years prior and hers from the present, they appear to be around the same age. We don’t know their exact ages, but based on looks we may assume each is 65-75 when we see them. This would give us an age gap of approximately 34 years. Maybe 30 years. Somewhere in that zone. Thus Yelana could, theoretically, be the previous leader’s daughter.

Then again, we have no way of knowing if leadership of the tribe is inherited. The Northuldra could very well have democratic elections when the time comes.

“You’re not coming back.”

The brush snagged and flew out of Elsa’s hands as Kjekk whirled around in fright—and narrowly missed whipping Yelana across the face with his tail.

Unfazed, Yelana blew aside strands of silvery hair that had been disturbed, and fixed Kjekk with a flat look. “Doavki,” she stated.

Kjekk whinnied indignantly, but Yelana’s arched eyebrow had him retreating behind Elsa and hiding his face in her hair.

Elsa raised a hand to calm him. “Of course I’ll come back, Yelana.”

Ryder walked past with a bundle of firewood. “She means you’re banished.”

“What?” Elsa was alarmed.

“That’s what Yelana told him when she actually banished him,” Honeymaren explained. “He found a herd of untamed reindeer when he was ten years old and thought they would adopt him. They didn’t, unfortunately. I had to go out in the dead of night to fetch him.”

“She makes it sound all heroic and selfless,” Ryder told Elsa, “but it’s only because Yelana told her she was also banished until she brought me back. She made me cry, you see; that’s why I ran away.”

“I didn’t make you cry. I literally stepped out of the hut for ten seconds and you started bawling.”

“Yeah, because you wouldn’t let me go with you!”

“You followed me everywhere back then! A girl needs her space.”

“I gave it to you—I went looking for a new family!”

“And I banished both of you to teach you how to get along,” Yelana cut in dryly. “Do you need a refresher?”

Three pairs of eyes landed on Elsa. She sheepishly tipped her head against Kjekk’s.

“Let me guess,” Honeymaren said, prying Ryder off of her. “Anna as a kid?”

Elsa smiled. “And as an adult, every now and then. With occasional variations.”

“Come on, Yelana,” Ryder protested, throwing up his hands. “Maren and I will always look like mortal enemies if you’re comparing us to that.”

Considering that the Northuldrans are based on the Sami people, the Northuldran characters should have Sami names. They obviously do not. Why is that?

The simplest explanation would be – this particular aspect of the Sami culture was not included in the adaptation.

Another possibility is that the Northuldrans do, in fact, have indigenous names, but only use those amongst themselves, giving the outsiders commonly accepted equivalents, which are easier to pronounce/remember.

Going even further than that – If we operate under the assumption that Arendelle is a Scandinavian state, their Native language is some sort of Scandinavian, and all the characters’ names have been adapted for the benefit of the English-speaking audience, the English dubbing of the movie may not be entirely correct when it comes to pronunciation of names.

Therefore, the Sami equivalents of the Northuldran names could be:

Iduna – Iiddá, Iinná (or she was named after the goddess Iðunn, in which case “Iduna” may have simply been the Northuldran version of Iðunn to begin with)

Honeymaren – Hánna Máren (or she started off as Máren and the “Honey” part was added later in life as a title, something like “Máren the Honey”)

(This is a crazy idea, but at hopefully it will entertain you ^_^)

While I’m writing “Those Left Behind,” I came upon an idea that may ruffle some feathers.

I do think, however, that the Northuldra are inclined to believe that their Spirits are infallible.  They trust, depend and, not to put too fine of a point on it, virtually worship the Spirits.  The Northuldra, I think, idolize the Spirits and have absolute faith in them.

Put yourself in the average Northuldra’s place for a moment.  Let’s go back to when Runeard made his appearance.  All is well–and then, it isn’t.

Now, imagine being trapped in the forest by these very Spirits that you worship.  You are absolutely, utterly certain that you have done nothing wrong.  And yet, you have been cut off from the rest of the world doing actions that you felt were utterly justified.  And to add to the frustration, the Spirits are no longer really communicating with you anymore.

Wouldn’t you feel just the slightest bit betrayed?  You don’t know what you did wrong and there’s no way of finding out.

Now, put yourself in the average Arendellian soldier’s POV.  You expect this to be a diplomatic mission and then, all Hell breaks loose.  You’ve failed your King and you’re trapped with people who are now your enemy.  And you have no idea why.

I think that the average Northuldra would be clinging to their faith in the Spirits, hoping beyond hope that there is a reason for all this.  And if they keep to this faith, maybe all will be revealed someday.  Because the alternative is to become disillusioned.

I think that the average Arendellian soldier would be angry, frustrated and homesick.  I’m guessing that most of them didn’t know their King’s true colors.  They didn’t ask to be part of some ineffable, long-term plan.

So, in “Those Left Behind,” I’m basically saying that the Spirits can admit when something’s not working.  While they are inclined to help humans, they don’t necessarily understand humans.  That’s why the Fifth Spirit is necessary.

So, I’m imagining a scene where Agnarr and Yelana are trying to hash things out.  They can agree on a basic detente, with no overt aggression on either side–but their perspectives and histories are so different that they can’t go any deeper.

Agnarr can’t believe that his father was a killer and a would-be conqueror.  Yes, Runeard was distant, but not an outright warmonger.  Also, Agnarr may not be the most devout of people.  Faith in itself is not a bad thing.  However, experience has taught him that what people choose to have faith in could become problematic.  After all, there are probably some kind people in Arendelle who would freely say “suffer not a witch to live” to his face.  So, Agnarr may be more dubious of the Spirits’ actions and reasoning.

Yelana has to cling to her faith.  She has to believe that, as the chosen people, this is merely a test of the Spirits.  She must stay the course, no matter how difficult.  And I’m not sure that her faith would even allow the possibility that the Spirits are imperfect.  And she certainly wouldn’t entertain the idea from Agnarr, someone who is an enemy.  She keeps the lore in her heart because it’s what has always sustained her and her people.

So, neither leader is entirely wrong or right.  Maybe I’m making them more complex than Jen Lee intended, but something like this can’t be seen in mere black and white.

#frozen 2, #those left behind, #agnarr, #yelana
16 notes · See All
demitruliText

In disney wiki they all her Yelana, in wikipedia Yelena, it sounds Yelena in the movie but she will pop up as Yelana on google search, yet there are SO MANY articles calling her BOTH Yelena and Yelana. I’m gonna go nuts, WHAT’S THE WOMAN’S NAME?! 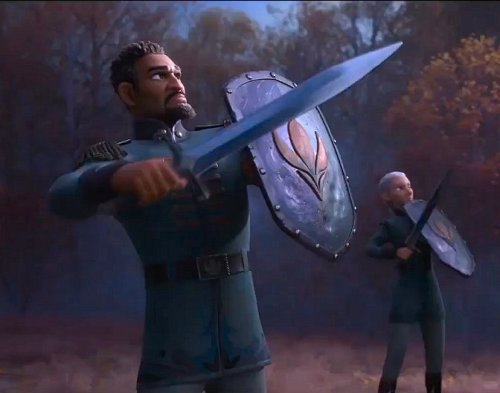 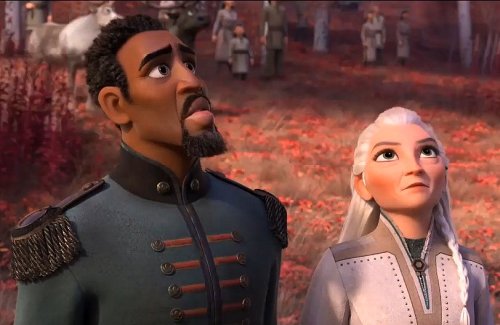 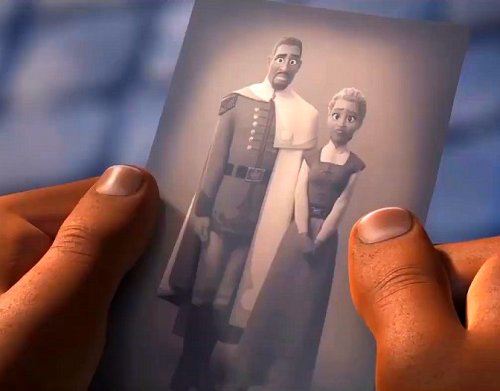 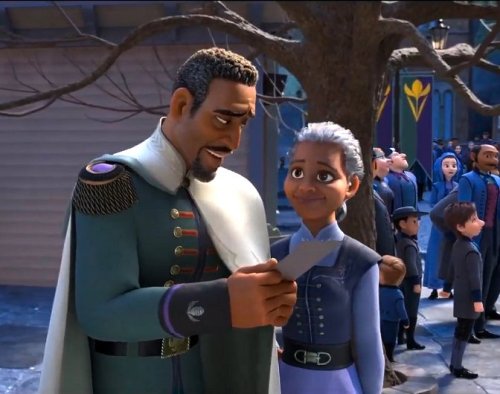 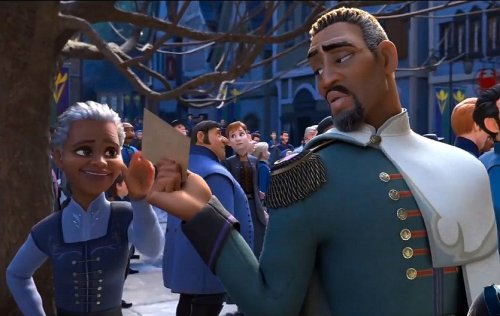 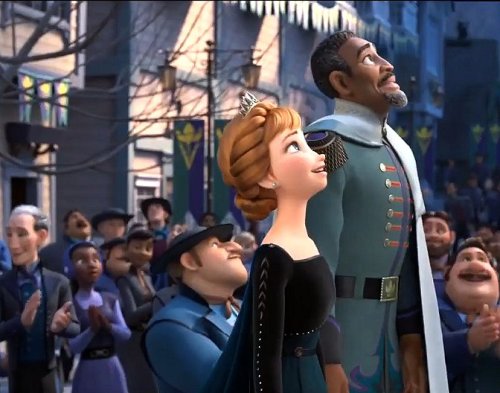 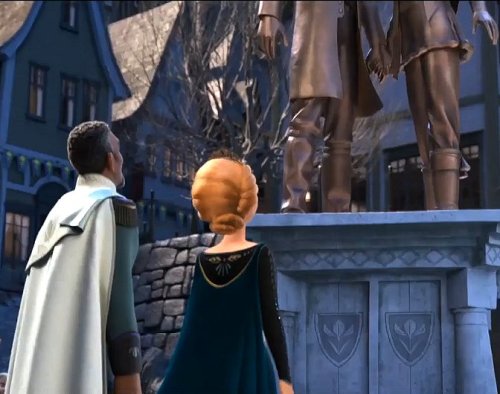 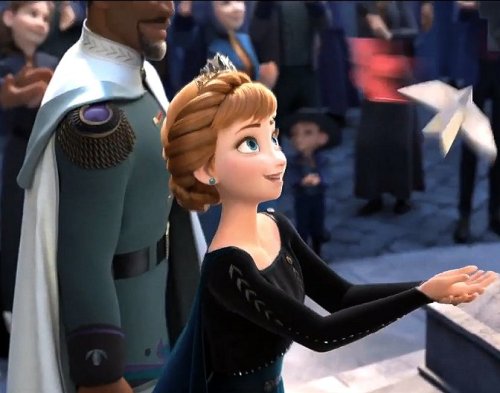 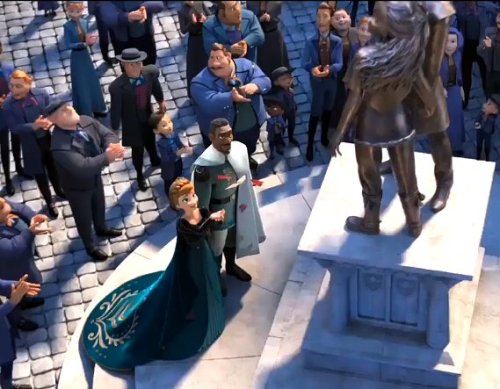 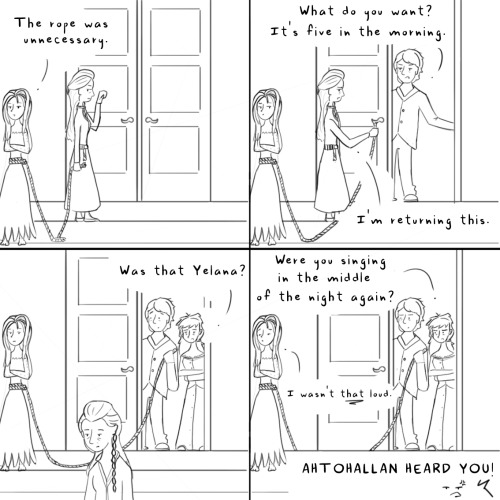 #frozen, #frozen 2, #elsa, #yelana, #kristoff, #anna, #silly comics, #frozen comics, #my drawings
407 notes · See All
hereisisaAnswer
If Yelana was the girls grandmother and the chef was her husband, then imaged that in just one day, Yelana lost her husband, her daughter was lost and never been seen again, she had a responsibility she wasn't ready for. Years laters, both the girls parents died, leaving Elsa with responsibilities she wasn't ready to take. Years later, Elsa and Olaf died (if the rumor was true), leaving Anna with responsibilities she wasn't ready for. This family was cursed.

That would explain Yelena’s bigger role (she was supposed to have). It would have been interesting. I would have loved to see Elsa and Anna dealing with a grandma, you know?

The kind of bossy grandma who would be like: “yeah yeah you head voices, survived an earthquake, a tornado, you have almost been burned alive and then drowned, but

well, more than once?? No? Then go clean yourself and come back right away cause dinner is ready!”

…..ok my Yelena sounds more like an italian grandmother than a Sami but you get it, I think.

Can Disney confirm wheter it’s spelled Yelana or Yelena, because I’ve seen both used in merchandising. And I even once saw a book that had BOTH spellings on literally the same page…

#disney frozen, #frozen, #frozen 2, #yelana, #yelena, #personal, #this is Mattias and Matthias all over again
10 notes · See All
labelleofbelfastcityText

Frozen 2 thought: what if the northuldren gave their bethrothed shawls as an alternative to engagement rings. Like imagine Elsa learning how to weave from Yelana so that she can make one that isn’t ice and honors her people’s heritage, and imagine Honeymaren’s face when Elsa gives her this shawl that isn’t perfect by any means but is beautiful and their’s.

((Of course the northuldren are based on the Sami people and I know nothing about their culture or traditions, this was just a headcanon for the movie))

The Northuldra find it absurd and unbelievable that Elsa wore gloves to conceal her magic. 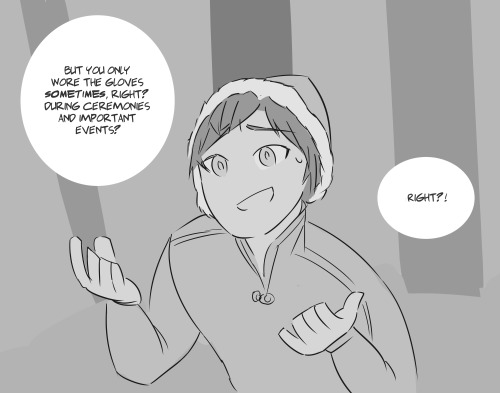 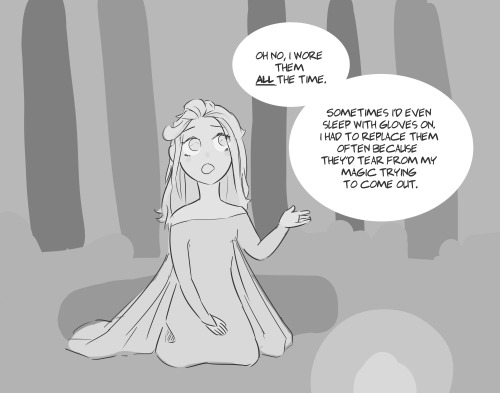 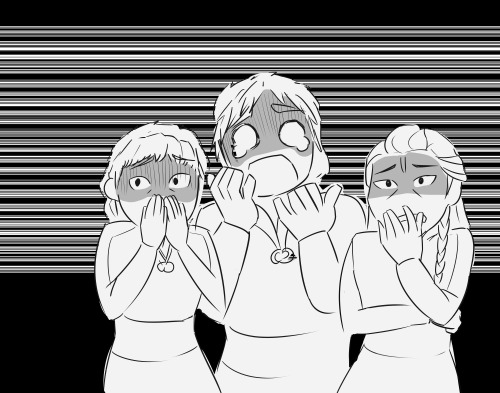 Never a dull moment with you two (plus Olaf) ver 2.0

Nokk’s name was never mentioned in the movie? We knew because we read the books/news/whatever, but otherwise, I guessed Yelana told Elsa later so she could stop calling him Samuel.

Anna: “Jerkface” because she hated him for trying to drown Elsa.

Elsa: “Samuel” I did a quick reseach and they said Samuel was male equivalent name to Samantha. Like mother, like son.

I love Nokk, he’s loyal to Elsa and will defend her to death if need be, but he’s still a big old grumpy Pokemon spirit that’s so fun to mess with. 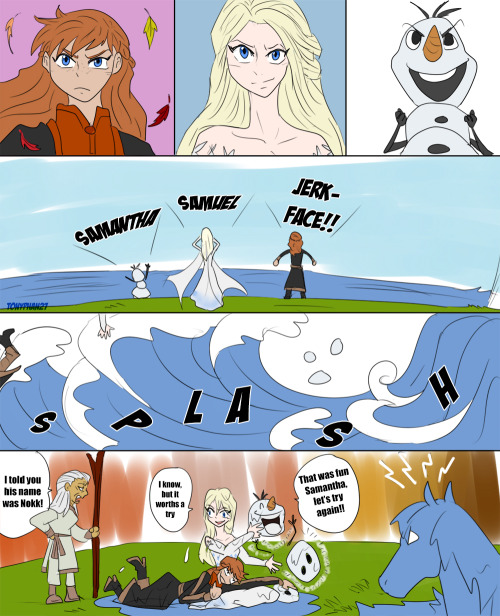