The Snow White Princess is (by Nachuu), 1/1, complete - Katsuki Yuuri is the most beautiful guy in the whole kingdom and it sparks jealousy to others.

Or Just Some Human Sleep (by Duskisnigh), 1/1, complete - “No, thank you,” Yuuri insisted, holding the broom in front of him like a weapon. “I may be fourteen, and I may have lived a relatively sheltered life, but I am not stupid, and I’m pretty sure you’ve drugged that apple.”

Out of the Sea (by SophiaFrederica), 7/7, complete - “Someone needs to make sure that you don’t go lusting after him too hard and accidentally enchant him with your beautiful voice and get him drowned. The royal family of Russia has no heir at the moment, so it would definitely drive the country into a chaos, and then it would be no use trying to make an alliance with them.”“Phichit!”

Under the Sea (by Linisen), 1/1, complete - Yuuri is twelve years old when Yuuko brings him to the beach to see a human for the first time. The silver haired boy runs in the sand, chasing after a brown furry animal. The boy smiles and laughs and Yuuri longs to be with him, to have legs instead of his light blue tail. Yuuri comes back to the beach often during the coming eight years, hidden from view as he watches Victor grow from a boy to a man. Yuuri himself getting older and more prepared to shoulder the responsibility’s of being born to the rules of one of the sea kingdoms.One night, Yuuri comes to watch Victor only to finds him on a boat. A storm closes in, lighting striking the ship, sending it in pieces down towards the bottom of the ocean. Yuuri can’t stop himself, as he dives to save the one he longs to stand beside.

Beauty and the Beast AU

The Coin, The Stone & The Rose (by Silver_Scribbles), 17/17, complete - Crown Prince Viktor Nikiforov once had the world at his fingertips; he was rich and powerful and handsome, and he had everything his heart desired. Now, he is a Beast, imprisoned by an Enchantress’ spell; hiding away from the world in the never-ending winter of his shame. Katsuki Yuuri is … odd, to say the least. Beautiful, but odd. While the rest of the villagers put one foot firmly in front of the other, Yuuri would rather loose himself to his dancing and his daydreams; always wishing for something more than his provincial life.Each is captive to circumstances beyond their control; trapped by unbreakable spells and impossible dreams. However, an unlikely meeting is about to change everything.Hope makes a final play for their salvation as the sands of time run out; but as Yuuri and Viktor learn to find themselves in one another, they also make discoveries that they’re completely unprepared for … some wondrous, some wretched … and some treacherous enough to permanently tear them apart. For who could ever learn to love a Beast?

with the power of love (by wartransmission), 1/1, complete - “Viktor?” Yuuri says hesitantly, eyeing him with caution.“It’s me, Yuuri,” Viktor says, smiling a heart-shaped smile that he hopes allays Yuuri’s worries. “And you broke the spell!”

Stronger than ever believed (by Linisen), 5/5, complete - “There is going to be a war, Yuuri,” his mother says calmly, reaching out her hand with her palm up. Yuuri takes it, hoping to find comfort in the contact. He doesn’t. He only feels cold and empty He feels as if he’s left without any means to defend himself. “There will be hard times for all of us. Morooka, he can take care of you. You will be well fed and have a good roof over your head. He has status, and hopefully when the war ends, he will help this town prosper.” “But I—” “Yuuri,” his father interrupts, and Yuuri looks at him, feeling desperation rise in his chest as they lock eyes. His father looks sure, cold and determined. The first tear spills down Yuuri’s cheek. “You have to be honorable. You have to carry this family’s honor. It is your duty as an omega. This is the only thing you can do for our family.”

Princess and the Frog AU

Kiss (by BunniesofDoom), 1/1, complete - Yuuri encounters a frog named Victor, who insists that he’s a prince with an unusual problem.

go on over and request literally anything you want! if i take interest in your prompt, i’ll try to write it! (rules are in first chapter)

What if Viktor had Yuri do all those ridiculous things when he was training in Hatsetsu partly to see if he could get rid of him so he could go back to only being with Yuuri?

I needed it to do it xDD

I love it sometimes how Nightcore edits take fanart and make it so ooc? Like… YURI PLISETSKY ON CALL ME MAYBE??? AND WITH A GIRL INSTEAD OF OTABEK?? That’s a crime

It is Trans Visibility day, my dudes! So I decided to go ahead and post the first part of the fic I am currently working on. Friends to husbands to lovers Otayuri, please give it a read and talk to me ♥

“My son,” his mother began, and even before she said something more, he was afraid. Nothing good ever came with that tone.

“You know how we meet with the Carters tomorrow, right? They have very close family friends, a nice Russian family with a daughter. Her name is Yuri. And she’s the prettiest—”

Otabek drowned out the rest.

Of course. Of fucking course. He hated cursing, but this was an instant when it was okay because, honestly, what the fuck were they thinking?

“ … they are a very influential family. I’m sure you’ve heard of the Plisetsky name.”

Yeah. Otabek heard of them. Every Kasakh had. Nikolai Plisetsky was quite famous. He founded a giant oil company, and since the 2000s, Russia continued to climb to the top of the world’s oil-producing countries, leaving the Plisetskys with more money to their name than even his family had. And that alone was frightening.

Or: The AU in which Otabek and Yuri are pressured into marriage by their respective parents, but manage to escape it for the longest time until they finally meet someone they actually like. Is it weird to fall in love with your husband? Especially when your family thinks he is your wife?

Yuuri Katsuki trusted the wrong person and found himself bonded at a young age without his consent. Ten years after the alpha took possession of him, he’s out and trying to pick up the pieces of his life.

Victor Nikiforov is a single dad of his young son Yura who has ran off every nanny they hired since his mother passed away.

Desperation and a little friendly interference will bring these two(three) together.

Pochayuu was so confused. He wasn’t unhappy at the situation as having a lap all day was a novelty he enjoyed, but he’d never had a lap for three days in a row before. Victor and Yuuri hadn’t left the house at all except to walk Makkachin and even then only one went and both Pocha and Pom had to stay behind with the other. Pocha sulked about it, but they were being stern and Victor and Yuuri were never stern with him. Pom had shrugged his shoulders when Pocha asked him about it so that was no help at all.

Pocha wandered over to the window and pressed his paws to the glass. It was so quiet outside. Normally the cars in St. Petersburg rushed past down below and the streets had people to watch. Now he saw the occasional car and no people. Even the cafe across the street was dark.

Pocha whined. This was different. He scrubbed at his face worriedly, looking back into the room where Yuuri and Victor were stretching out. That was new also. They sometimes did a little stretching before bed with the puppies, but this was an intense workout and Pocha wasn’t able to keep up. Pocha wasn’t used to being left behind and it didn’t feel good. He whined again and Pom’s head poked up from the sofa where he’d been napping.

#yuuri katsuki, #yuri on ice, #untiliceado, #yoi, #myart
104 notes · See All
shanastorytellerAnswer
Happy St. Patrick's Day! Maybe a continuation to the ghost Yuri on Ice prompt, or something to do with one of the Zuko dragon prompts?

When his parents die he’s seventeen and it takes him a week to notice.

They walk through the door after a bad storm, and check in on him, smile and tell him to finish his homework. His mother says she’s having trouble with her hands and she’ll need some help in the kitchen tomorrow. He says okay, distracted, thinking it’s her arthritis and doesn’t think about it.

He does the cooking for all the guests for the next few days, listening to his mother’s directions, and if she doesn’t brush her hand though his hair like she would normally, he assumes she’s just staying out of his way.

His dad goes out to rake leaves and it’s not until a customer comes in terrified, saying he’d seen the rake moving on it’s own, that Yuri feels something heavy in the bottom of his stomach.

“Oh no,” his mother says quietly, and when Yuri looks at her this time she’s soaking wet and there’s huge, bloody gash in the center of her forehead. He blinks and it’s gone, but he’s seen it, he knows it’s there. He reaches for her and she doesn’t pull away.

His hand passes right through her.

Chapter 7/7: Kill me Slowly with Your Kiss

Sometimes I make a post, and then I promptly forget I made it, and then I’m scrolling through my dash and have to confront what I’ve just written and have a moment of “Thats wack but I stand by that”

All applicants have been sent an e-mail, regardless of whether or not they have been accepted! If you applied to the zine, but have not received an e-mail from our team, please remember to check your spam folder in case your account auto-sorted our message.

Thank you to everyone who applied! We respect and value the time and effort everyone put into their submissions, and their craft.

Here’s some sappy teasing just for you!

If you like these prompt responses, please check out my Ao3 (126 YOI stories alone lol)

Sleep clouded the last unconscious pieces of Yuuri’s mind as he blinked himself awake. The bed was empty next to him, both Makkachin and Victor missing from spots that they had only recently made their own. It felt weird to wake up without Victor’s hums as he got dressed and the immediate face full of Makkachin kisses, especially when Yuuri discovered that Victor’s spot was cold.

Sweatpants and a hoodie found their way onto Yuuri’s body before he was fully coherent, his feet stumbling as he pulled on his socks and headed for his door.

The dining room was quiet, more quiet than Yuuri had seen it since he and Victor had returned from China. His mother leaned over a far table, cloth wiping in efficient circles to clear away the mess left behind from patrons who had already gone. She smiled at Yuuri when she caught him standing in the doorway.

“Vitya,” the diminutive was new and his mother looked pleased as she said it, “he went to Yuuko’s. He told me to tell you that you could meet him there.”

How is he so beautiful???? I would kill a man for him. 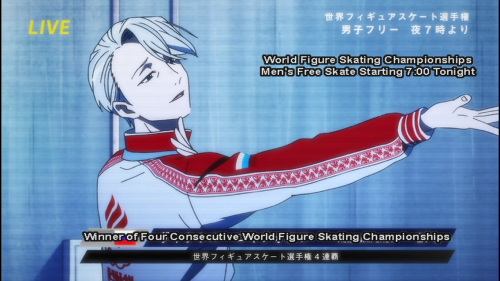