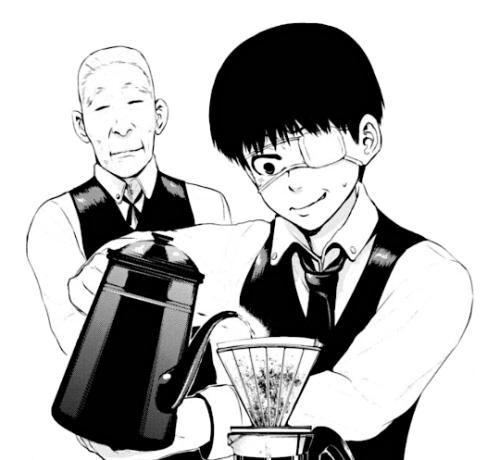 I was just reading through the manga, and I realised something. Yoshimura, no matter how kind he is, is deep down a bad person (I don’t know how to word that, correct me if I’m wrong). He left Eto in the 24th ward, an actual hellhole, where she could’ve easily been killed instead of leaving her with a nice ghoul family or an orphanage (a place she could easily blend into). There aren’t enough words to finish my small rant, but despite what people think, he’s not the best person.

Personally, I wouldn’t exactly say Yoshimura is a bad person. I mean, I think a key theme of TG is that everyone is morally grey. Killers can be kind, defenders of humanity can be sadistic, and even the main protagonist (Kanek) and villain (Furuta) have the same goal in the end.

For Yoshimura…he helped Touka, Ayato, Yomo, Irimi, Koma, Kaneki. In a way, he saved many of them from their violence. That’s beautiful.

And without knowing who exactly Noroi was, I’m hesitant to say he left her in a hellhole without caring, because it’s honestly possible Noroi was his safest option. But.

That being said, once the initial danger was passed, Yoshimura didn’t try to take Eto back. Maybe he still feared for her safety if V returned; maybe he feel guilty over Ukina, etc. But as time wore on, he still risked himself to save many other self-destructive ghouls, yet never his daughter.

His passivity is the cause of Eto’s abandonment issues, which she herself says.

Yoshimua’s best intentions, if they even were his best, weren’t even close to enough for his daughter. And that’s super tragic.

I think maybe this is why he flat-out tells the investigators “I am cognizant that I am evil.” But then, if he knew, why didn’t he do anything?

He’s a sinner with good intentions, just like almost all the characters. :’(

The Washuu eating the CCG’s deceased investigators, and also corpses from public cemeteries procured by V’s agents, adds another layer to Kuzen’s reason for not killing anyone whenever he appeared as the Owl. Besides liking humans, it was probably also a continued act of defiance against V and the Washuu. He didn’t want to support this system again, like he did as one of V’s agents. This also gives the the brief exchange between Kuzen and Yoshitoki, right after Kuzen killed plenty of investigators, a proper meaning.

After reading the latest chapter, I was thinking about V; they're half-humans if I'm not wrong but Yoshimura was a V agent and he's a full ghoul, right? Does it mean that not all of them are hybrids?

…presumably, yeah. And it’s also worth noting that I doubt the V agents are like breeding themselves, so perhaps there are hierarchies within V? Yoshimura might have been someone like Rize who was born a full ghoul.

Would you blame Yoshimura for abandoning his daughteru underground and leaving her without a father just because he was put in a bad position? I've seen some posts around saying Yoshimura was a horrible father because of his choice and it bothers me tbh, he was a great father figure.

Weeeeeelll… I’m so sorry but: great fathers don’t murder their child’s mother, abandon their children, and raise other adopted children but not care about whether or not said children live because you hate what they are (ghouls) because you’re projecting your own sins onto them. Sorry Anon, but yes, I blame Yoshimura for being a Bad Dad. I wrote this post about it.

But like all things TG, it’s gray. Yoshimura WAS in many ways a great person. But he was not perfect, and his flaws unfortunately had consequences. I actually really like him as a character and his role in Touka’s life, etc. The saddest thing was I think he was so blinded by guilt he couldn’t ever see the beauty that was also a part of what he had created. 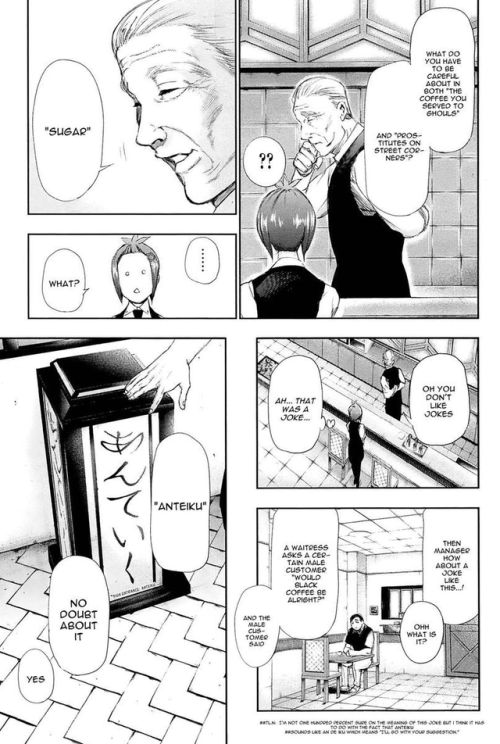 I just realized we can make an easy parallel between Eto and Touka.

Although they never came face to face with each other, they are similar in someways. Biological similarities (female and ghoul) aside, they both lost their mother at a extremely young age and had to grow up in a rather harsh environment. They both has their disagreement with their father, and both of them are somehow being forged by this disagreement. And of course, they both played important roles in the creation of Kaneki Ken’s current personality.

Yet at the same time, they’re two very different, almost opposite characters.

Like, while Touka struggled herself to fit into human’s world, Eto was the leader of a ghoul terrorists group.

Touka regards Kaneki as a person, so when he lost his past but seems overall happier, she didn’t just act and drag him back, even this was against her deepest desire. Because by some hard lessons, she learned that her joy may not equaled to his happiness. Eto regard Kaneki as a major character in her (and Arima’s) grand work, so she intervened when the moment of plot was right, even that meant Kaneki will yet again suffer. After all, what an unfit author would she be, if she gave her MC nothing to overcome, thus made him a mediocre character who may never endure that grand finale she had been preparing since very beginning of her story?

Hell, come to think of it, Touka’s least favorite subject back in school was literature, while Eto was a famous novelist.

The owl and the rabbit never met, but as two of the most important female casts in TG, their comparison sure intrigues me. 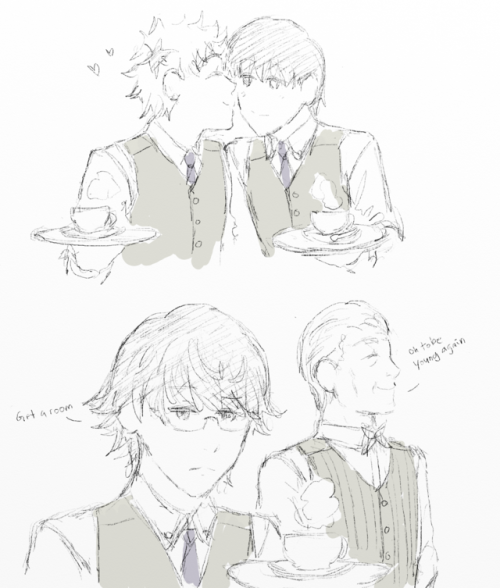 With all these reunions, I really hope we get to see Kuzen reappear. I know he doesn’t have much of a role waiting for him right now, but, he is still Eto’s father. There is still a lingering loose end floating around: Kuzen finally confronting or speaking to his daughter. The poor girl was left to go through so much by him and even given something that was her mother’s that only added furl to the raging fire in her heart.

I may write a bit about where things could go between them soon. There is a lot to be said between the original Owls.

Thanks to kind people here we have gotten some bits about the new Tokyo Ghoul novel. Now some more bits have been translated and you can find them here: http://pseudocitrus.tumblr.com/post/155055669269/hello-can-i-ask-what-the-aogiri-story-in-the

There is a small, but very interesting bit about Eto. Hinami serves her some coffee that she has made and Eto’s reaction to it is a bit nasty. After taking one sip she pours it to the ground and let’s the cup fall. This might seem super random and mean at first, but after thinking about a little I think her behavior makes sense. The coffee that Hinami created must have reminded her about Anteiku and about her father too. Eto has very negative thought towards Yoshimura as she sees that he abandoned her into a cruel world. She also finds her father as a coward. The mere sight of her father being happy, talking to his co-workers Irimi and Koma, acting as the guardian to them she never had, engulfs her with rage.

So for Eto to taste something that reminds her about all those things, things that she hates and finds disgusting, no wonder she poured the coffee to the ground and coldly let the cup fall. It was a nasty thing to do sure, but I think it’s very fitting for Eto to react in that kind of manner.

Do you think Amon will overbecome his floppiness and accept himself as a OEG ? Do you think Urie will fight kaneki in the future,and do you think is there any futuristic consequences to it ? Did kaneki forsake yoshimura wish to save Eto ?

Do you think Amon will overbecome his floppiness and accept himself as a OEG ?

If he is alive, that is. Nonetheless, I think Amon already embraced the ghoul-part of him tbh.

Do you think Urie will fight kaneki in the future,and do you think is there any futuristic consequences to it ?

Since Kaneki’s is the CCG’s #1 target at this point, this is inevitable. It won’t be … something to look forward to. Definitely, though, the consequences will be excruciating.

Did kaneki forsake yoshimura wish to save Eto ?

I don’t think so. Eto may be alive for all we know. If she is not, it is not Kaneki’s fault; she was badly injured.

First Eto back at the Anteiku raid:

And now Amon to Tooru

But more seriously speaking that scene in the new chapter reminded me a lot of what Eto did back at the Anteiku raid and I wonder if it was a parallel. It also brought back the horror when Big Madam tried to eat Urie as a whole.

Maybe partially why Urie flipped so badly at the end was because he remembered the horror how it was like being eaten like that? Tooru being eaten was probably a huge factor too.

It's a different question actually

I know it’s highly unlikely ,but what if Amon koukhou donor isn’t yoshimura instead it’s Rio . What makes me think so is because when Kanou was listing his success and floppies he didn’t mention nor Amon nor Furuta which is weird ?( In chapter 44 )

I don’t think Amon is made out Rio’s kakuhou. It was never discussed and I do not see why it would be the case.

As for Chapter 44, Kanou was talking about Rize’s kakuhou in the quote you referred to, then he talked about Yoshimura-based subjects, including the floppies. Amon is not made with a Rize-base. Additionally, because the number of floppies is high, Kanou wouldn’t bother listing the names of the floppies.

As for Furuta, it is quiet obvious why he wouldn’t be mentioned. This is something that Furuta and Kanou hid from Aogiri. It would be stupid of Kanou to spill the beans. And … for all we know, Furuta may also be a floppy, even if he benefits from some sort of power. Regardless, Kanou won’t mention him to Aogiri.

There might be other donors that we are not aware of at this moment, but this panel/chapter does not provide any information… and we know for a fact that Furuta is a Rize-based hybrid.

What if,well if it is Irimi and Koma.What if they go to save Yoshimura only to find him gone?Stating the almost fact that we’ve seen almost most of the main cast cry alittle,like Hinami when she lost Ryouko.What if they finally begin to break down all they’ve kept in?If so will they be like Kaneki with Arima?I don’t think my heart could take that again.. 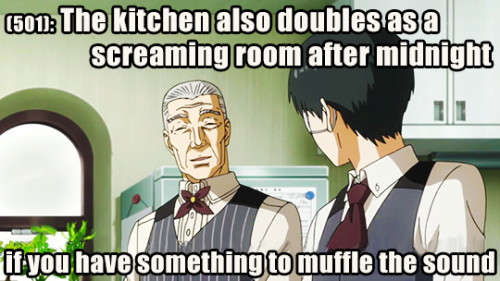 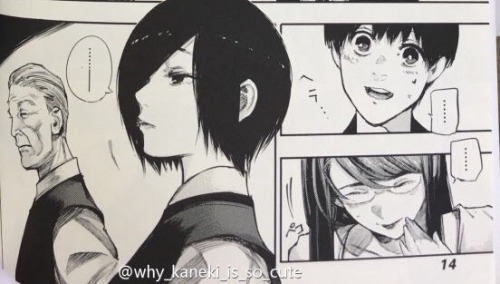