(btw yes i gave nao some actual overalls, and not just an apron)

— reko yabusame; i’m in love with this woman.

older sketches of the yttd ladies 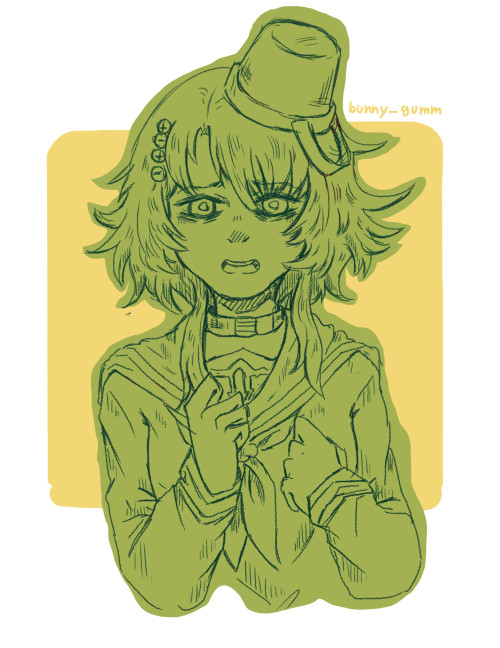 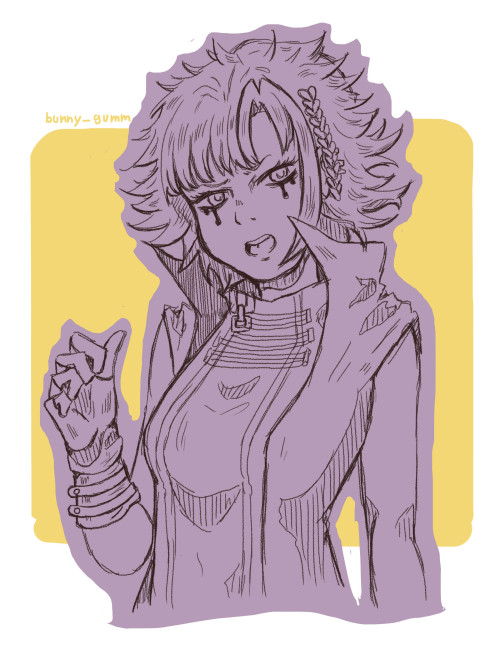 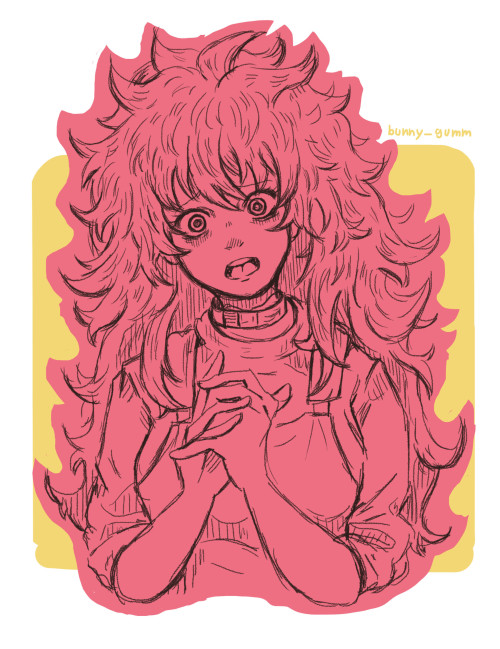 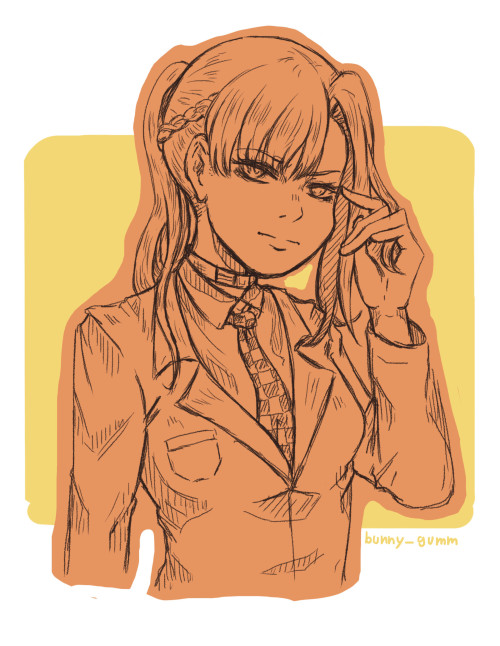 Ranmaru and Sara continued to check the graveyard, being careful not to wander too far from the rest of the group. A quiet grunt caught Ranmaru’s attention, and he peered in the direction the noise came from. No one else reacted to the strange noise, so he tried to ignore it and continue working but it stuck in the back of his head. There’s no way it could be another Obstructer, right?

A few minutes passed in silence, and Ranmaru had nearly forgotten about the noise when he heard Reko yell out “What the actual fuck is that?!” Anzu ducked behind her partner fearfully as a grotesque creature slinked out of the darkness. Mere feet from him, the creature was made almost entirely of long, dangling limbs. It slide unevenly from side to side, as if searching for something. Ranmaru just stared at the obsurd creature as it lumbered around, looming over with a bulky size that nearly doubled his own.

“What are you DOING?! Get away from that!” Naomichi whisper yelled, unsure if the abomination could hear. Sara took his hand, slowly stepping backwards to make as little noise as possible.

With a final lurch, the creature rose to a standing position. The long arms stopped surveying the area, and it became still. For a tense moment no one moved. Ranmaru held his breath, gripping Sara’s hand tightly.

The creature slowly tilted its head in Ranmaru’s direction, swinging out its arms wildly at the two teens. Naomichi lunged forward, pulling Sara out of its path. Her grip slipped, and she let go of Ranmaru’s and. Just as Naomichi grabbed the boys arm, one of the hands just barely caught the shuriken pendent dangling from his neck. Ranmaru was swept off his feet, a hand gripping to the small boys neck as he was dangled high in the air. Sara cried out, fear filling her eyes, “NO! Ranmaru!!”

Everyone was speaking at once, but Ranmaru could hear none of it. He could only hear his heart beating in his ears. He let out a pitiful squeak, unable to make any other sound. He struggled in the large creatures grip, kicking it in the chest in a feeble attempt to free himself. But the creature held steadfast, more hands clamping around his wrists, gripping and tearing at the bandages snuggly wrapped around his chest. The raw strength of the creature made his arms burn with pain, and no matter how much he tried he couldn’t free his arm from the monsterous creatures grasp. It began to pull on him, dozens and dozens of hands pulling at his limbs, undetered by any attempts of resistance.

“Please, please do something! They’re gonna tear him apart! They’re gonna tear him apart!!” Anzu wailed. Ranmaru’s stomach dropped at the realization. The hands weren’t just pulling, they were twisting and yanking so hard it nearly dislocated his shoulder. It was trying to tear his arm off, it was trying to tear everything off! He screamed as another hand landed on his leg, uncharacteristically trembling in terror. He flailed wildly, clawing at the hand holding him up to no effect. He couldn’t die, not here! Not again! His breath quickens, his breathing becoming short and uneven, “Hurry!! Please hurry, I…I can’t.. much longer…!” he wheezed out, gasping for air.

“Hang in there, Ranmaru! We’ll get you down, I promise!” Sara yelled up to him, with her usual confidence that always managed to make him feel a bit better. It was reassuring to hear, even if he didn’t exactly believe her. He wanted to, he really did, but he hadn’t held these new comers in high regard and bitterly assumed they’d have no care for the safety of a doll.

No matter how much he squirmed and struggled and fought, Ranmaru was quickly immbolizied by the many armed creature. His vision began to fade, pain pulsing through his body as he felt his arm slowly begin to tear open. Every part of him was in blistering, agonizing pain. He hadn’t even noticed, but he started to cry silently. He wasn’t going to get out of this alive, he hated himself for even having hope.

And then, the pulling stopped. A horrendous shriek boomed through the air, and Ranmaru landed to the floor with a thud. Slowly, his vision began to clear up and he was promptly tackled by the petite clown girl. He weakly smiled at her, patting her on the head softly with slow, painful movements. “You’re alive, you’re alive!! Ranmaru, can you hear me?? Ranmaru?” Ranmaru slowly nodded in response, making no attempt to speak.

Anzu got off, and Sara gently crouched down beside him torch in hand. In front of him was a pile of ash where the monster once was. She cocked her head to the side, gently running her hand through his messy white hair. He flinched slightly, turning red as a tomato. “Are you feeling alright, Ranmaru?” He looked at her in shock, and then mutters out in a forced hushed tone, “Y…You.. helped me…”

“Of course I did. We’re friends, Ranmaru. I care about you. Doll or otherwise, we’re all in this together. I made a promise and I intend on keeping it.” Ranmaru cracked a small smile, reddening further at the comment. Sara lent him a hand, which he hesitantly took and she hoisted him up off the ground, wrapping a arm around his shoulder to support his weight. “Be careful, alright? I got you.”

“Let’s get going already.” Naomichi insisted stubbornly, crossing his arms over his chest. Ranmaru could tell that he felt guilty about what had happened, and couldn’t help but smile. Maybe he wasn’t such a bad guy after all.

Maybe none of them were. Maybe… Maybe they could work as a team.

The cast of Your turn to die in a nutshell:

Winter moodboard with reko for day 2 of my edit week

Alice: I want to be a pirate

Alice: And I want cat ears

Reko: My mind pictures furry pirates and that’s a reality i want to live in

The preorders are open for 3 more day and I’m sure you’ve already seen others posting but if you haven’t I really recommend checking it out!! I’ve been able to work with so many talented people and I know you’ll all love what we’ve made!

The way Reko is constantly ready to knock Sou (Shin)’s lights out and just end that fool AND Alice killed the real Sou Hiyori? Call that the Yabusame Instinct 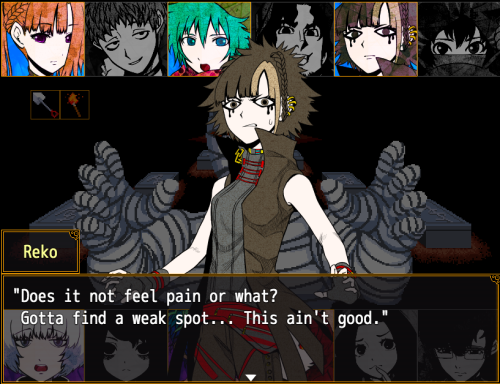 i’ll talk about them separately first, then together! so i hope you don’t mind if this gets a little long (＾ᴗ＾)

Anyway have the gfs UwU i love the very much 🥰🥰🥰

JOE IS TERRIFYING WITHOUT EYEBROWS!

This… this is low key scary

For some reason Nao, Reko, and Keiji are still so beauiful