I FORGOT I HAD THIS BLOG AND WANTED TO OPEN IT UP FOR LIKE HEADCANNONS OR SHIT AND I’M SCREAMING.

DID I REALLY DO THIS

DID I DO THIS GOLD

one of the funniest things ive ever come up with is yut-lung with a hate crush on eiji.

yut-lung: i HATE eiji. all his stupid smiles and those horrible puppy eyes and disgusting amounts of compassion! and why’s he so buff! it’s so fucking annoying, ugh!!

yut-lung: and another thing,

#of course it's probably just that he wants to be friends with eiji but has so much trauma he assumes the feelings must be attraction, #bc that's all he's familiar with, #but it's funnier to just roast him for being mad about eiji's ass being better than his, #yut lung lee, #eiji okumura
29 notes · See All
alartes-drawsText

some sketches for a very self indulgent coffee shop/bookstore au where eiji is a new barista, ash is a bookstore employee, and yut lung is eiji’s best friend who won’t stop bothering him at work

you know what would make this world better, more soft hc and fics of shorter… I’m just saying 😔

I head cannon that the reason Eiji likes Ash better then Yut Lung is simply this .Eiji has a horrible sense of self. He feels like no matter what its not good enough. There is no maybe next time for Eiji or well I tried my best. He has to succeed or he feels like a terrible burden on those around him.

Enter Ash who thinks Eiji is ten times better then Eiji views himself. Eiji can do no wrong in Ash’s eyes Eiji is the embodiment of safety and love. Ash will do anything and everything to protect Eiji and its flattering that this popular, smart, beautiful boy thinks Eiji is more important then anything in the world.

Yut Lung on the other hand see’s right through Eiji. In the manga upon their first meeting Yut Lung accuses the older of not knowing what’s going on or what he’s doing. And Yut Lung ain’t wrong even when he’s talking absolute crap its crap designed to hit Eiji where it hurts.

Yut Lung is implied to be good at reading people and he’s had at least a week with team Ash to learn their personalities. My conclusion Yut Lung can read Eiji like a book and he knows his every insecurity and even if he is just taking shots in the dark. Eiji’s reactions are teaching him just how to tear through those fragile defenses. Yut Lung is every mental beatdown Eiji has ever given himself in the flesh. And I still think that no matter how much Eiji rails and insists Yut Lung is wrong, he’s evil, he’s a bully. Late at night its Yut Lung Lee’s voice that throws every insecurity Eiji’s ever had back in his face.

Which is why Yut Lung should of been Eiji’s antagonist instead of Ash’s. Yut Lung isn’t an obsticle or threat to Ash on even an emotional level but he’s always been the personal challange Eiji faces every day because he echoes the voice in Eiji’s head telling him, he’s nothing.

my thoughts on yut lung: i think he’s SO COOL and super funny but also… ~damaged~ like every other kid in that damn show. his fighting style (with the needles and the poison and all that) is SO cool to me. it’s so swift and precise and elegant and LETHAL. he has some moments that really had me rolling even if they weren’t meant to be funny. like of course the moment in the hotel bathroom with blanca but also when sing slapped him?? that shit was so funny i had to pause the episode and just holler😭 also his style is just?? incredible???? like all the traditional clothes he wears are so pretty and sophisticated, his hair is always done PERFECTLY, and just the way he carries himself is super elegant and enchanting. what happened with his mother is horrible and i think he was right to want revenge on his evil brother’s for what they did. it upsets me how much he “hated” eiji purely because of how much ash loved him. i hope he found proper love and care from someone someday (romantic, platonic, or familial). but yeah, overall, i like him. he has his flaws, and he of course did some bad things but, LOVE him as a character.

i realized something. at first i assumed that yut lung was jealous of eiji, like whenever he asked ash “why all this for a boy like him?” is because yut lung didn’t understand his appeal and he wanted eiji’s place, to be that close to ash. that’s not it. yut lung longed to be loved unconditionally, too, he yearned for someone who’d see the worst of him and Stay. yut lung wished to know Why eiji, so he could know how to find his own

Made a new video

I made a thing, a low quality thing, and I’m proud.

I hope no one did this yet. 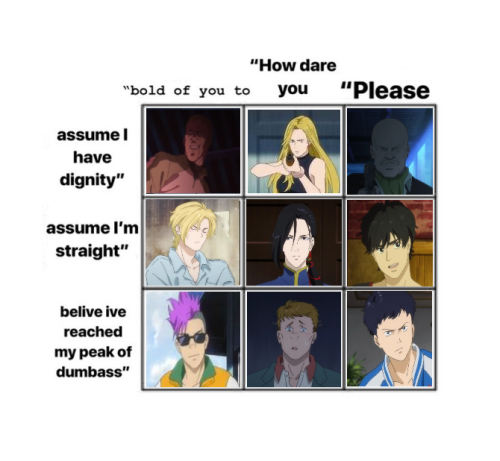