Yuuri wants to believe he’ll love his soulmate. His mark makes it difficult.

A life is saved, love grows; choices have to be made.

An AU in which instad of figure skaters the characters are photographers and models. In this AU Chris and Viktor are very famous models, Yuuri is a secretive photographer who goes under the alias Eros and Phichit is a model. 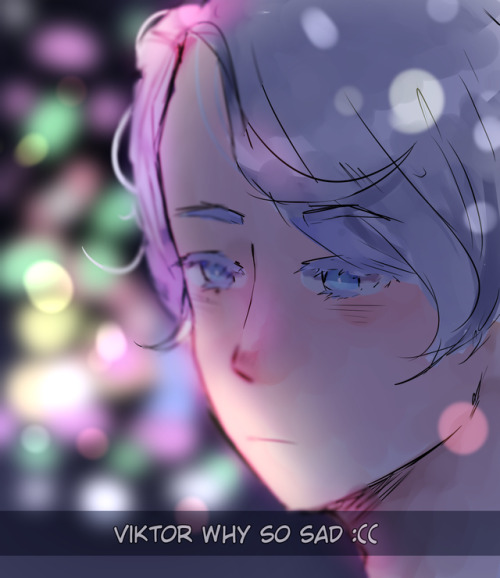 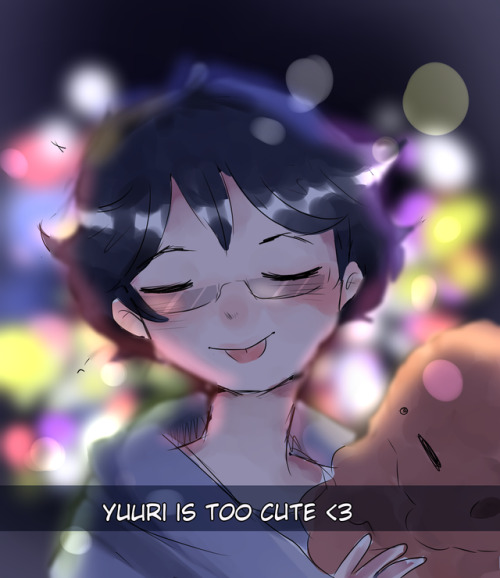 Please help me find an original (well as much as possible! lol) for a smut Victuuri one shot! tell me what you would like to read and I’ll choose one! (or maybe more depends on how quickly I can write it! lol)

~yuuri, Does your glasses suites me????~ 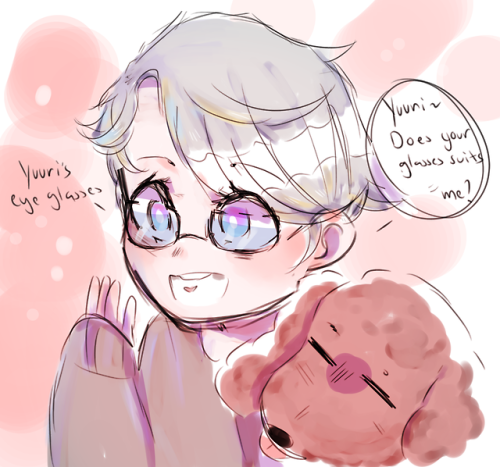 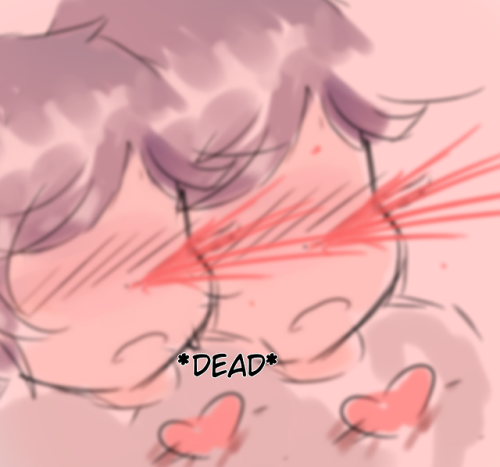 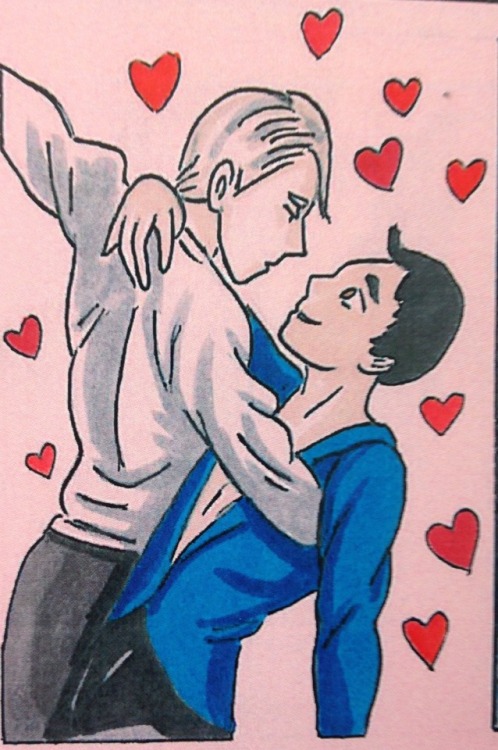 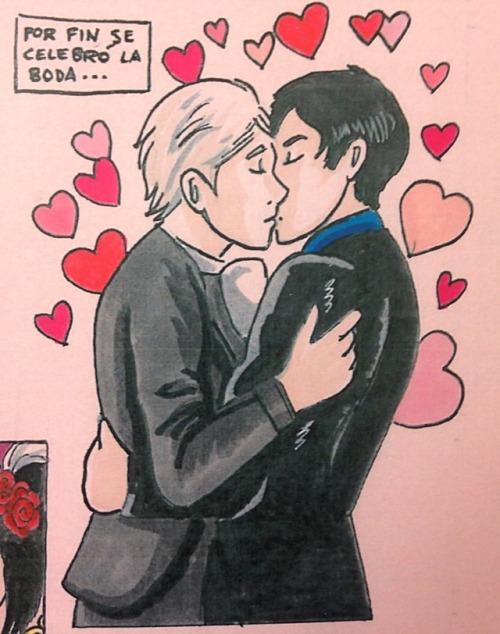 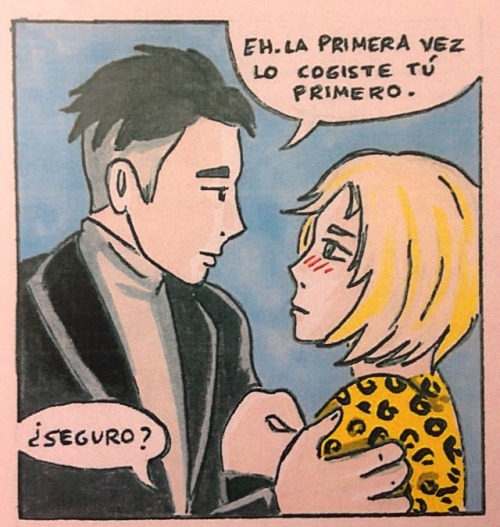 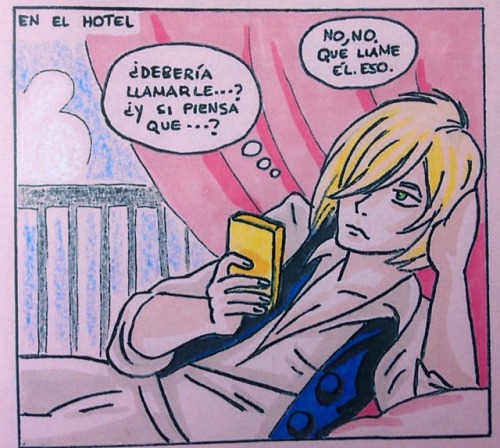 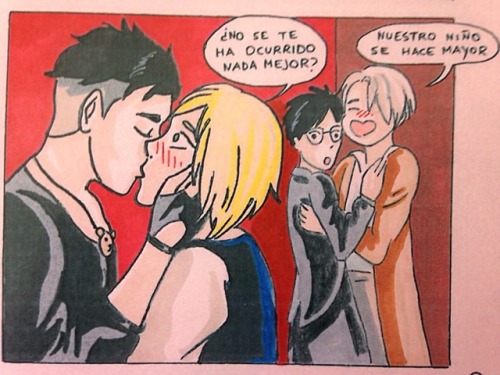 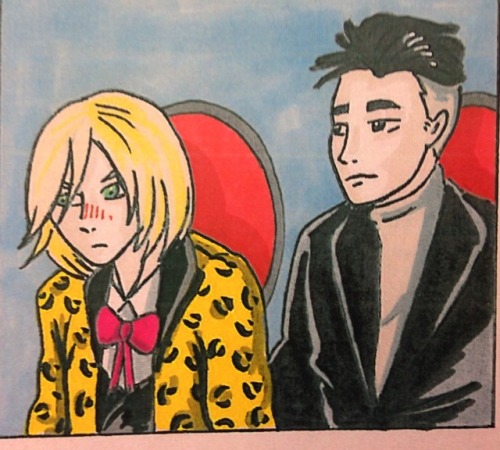 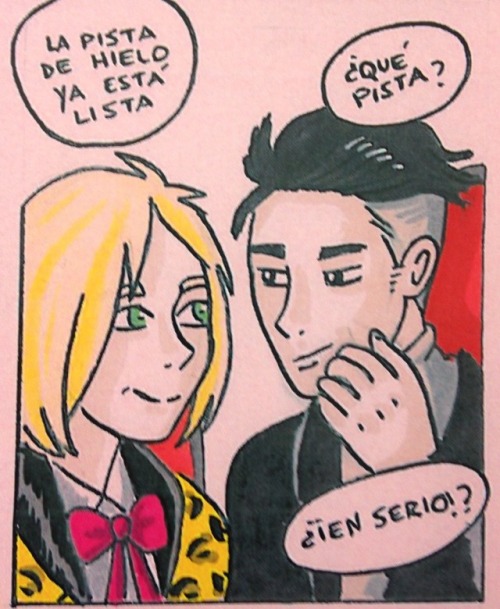 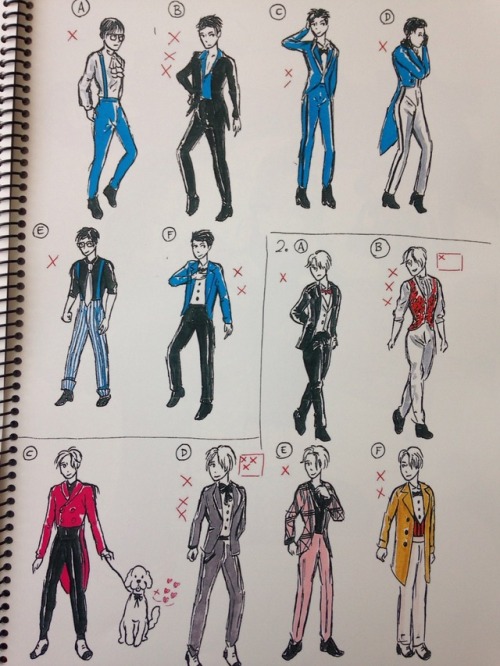 it was a early afternoon in st. petersburg. the birds were chirping, a soft breeze was blowing, and finally the sun lit up the sky, making everyone have a warm feeling. viktor and yuuri walked hand in hand, feeling each other’s soft embrace. yuuri smiled softly, as he looked at viktor’s icey blue eyes. viktor noticed.

“anything wrong, moya lyubov?” he said, with his thick russian accent that yuuri adored. “no, nothing, i just love you so much.” he cuddled into his chest. viktor let red fill his cheeks.

they continued to walk, until they reached the entrance of the bank, where viktor needed to have yuuri’s name added to his savings, or their savings. they were so close to their marriage, it lit up their hearts so much.

they both went in the line, behind several people, still in each others embrace.

a couple minutes later, a strange man entered the building, dressed in all black. viktor only glanced at him for a second, before putting his attention back on yuuri.

the man walked in, looking at the people and employees, before doing a simple chuckle, placing a lock on the door handle, connecting them together, hoping no one would get out. he then scanned the area one more time, before getting his pistol out, and throwing three shots into the air.

viktor held yuuri tight after hearing the three loud bangs, before looking over to the man. “yuuri, get down.” he said, pulling them both down, kneeling, so the attacker knew they weren’t causing any harm.

yuuri held onto viktor tightly, kneeling. he buried his face into viktor’s chest. “i don’t want to die viktor.. i” yuuri was lost for words.

viktor laid a hand on his hair, softly stroking it. “yuuri, we’re not going to die, no one is, only him. just try to stay calm, okay? i’m right here, that’s all that matters.” he whispered into his ear, gently kissing it after.

yuuri began to breathe in and out, closing his eyes, and feeling viktor’s heartbeat. his heartbeat was so soothing to his ears, it was like listening to the waves crashing in an ocean, but it was right here. he smiled.

however, it was soon interrupted by more gunshots.

(is this something i should continue? like or reblog if so) ((: 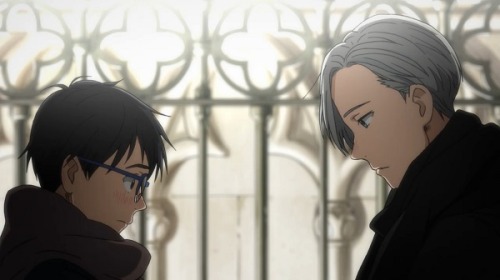 I thought I’d join in with @victuuri-week … hope you enjoy!

Early morning sunlight streamed in through the gap in the curtains illuminating the two single beds in the hotel room.  One was as pristine as the moment the occupants had entered the space, the other contained the tangled forms of two naked men both sleeping content in each other’s arms.

It should have been a scene of peaceful blissfulness, but in their time, 1932, their actions last night were completely illegal.

Yuuri opened his eyes first, not wanting to move and disturb his partner. Before too long they would have to dress and return to their respective wives and children, not sure when they would be able to spend time alone like this again.

There were only so many ‘business trips’ the pair could get away with without raising suspicions.

He hoped and prayed that Viktor would get his promotion, then there would be more visits to be made, longer trips out of town rather than a quick night in a seedy hotel every now and then because… ‘Oh gee honey, the car broke down, Yuuri and I are gonna grab a room for the night as the mechanic can’t get to us right now.  Yes, I know, we need a new car, it is unreliable, kiss the children goodnight for me.’

Yuuri smiled a peaceful smile, he knew he had been right to apply for the job as assistant to the Lead Sales Rep the moment he has stepped through the door and encountered the handsome silver haired man sitting behind the desk.

The instant attraction between the two men, the subtle sign each gave of their true sexuality, it had all been perfect.

Movement beside him broke his train of thought and he smiled as he felt soft lips kissing his neck.

“Morning my love, is it time to go already?” The thick Russian accent made the hairs on his arms stand up, he could listen to that voice all day and never tire of it.

Yuuri peered at the clock, vision hazy without his glasses, “No, we still have an hour before checkout.” He rose, visited the bathroom and returned to the warm and waiting embrace of his lover.

Viktor buried his face in the thick black hair of his Japanese love, inhaling his scent, committing it to memory again before speaking.

“Yuuri, I can’t do this anymore, I’ve told Mary I’m leaving her and the children. I can afford to keep her and me in separate houses; I need to be free to have you with me whenever we want to be together.”

The black hair man raised himself up on one elbow and kissed the beautiful heart shaped smile on the older man’s lips. “You make it all sound so simple, my love. What do I do about Sarah, I don’t earn enough to support two households.”

Viktor stroked his arm, a twinkle in his blue eyes, “Maybe I have room for a lodger in my new house, the one that I may have already purchased in the next town. Maybe you only need to support one house as the other is already taken care of.”

He rolled him onto his back, pinning him to the bed, covering his neck and face with kisses. “Say you’ll do it, say you’ll leave her and come live with me, heck, we’ll even get a dog!”

Yuuri gazed up into the liquid pools of blue, so in love, “And the scandal? How do we live that down, we are illegal you know.”  Viktor grinned, “Easy, each month we double date a couple of ladies, be perfect gentlemen all evening and then never see them again.”  The black haired man chuckled softly, “You have really thought this through, haven’t you?”

The Russians face became completely serious, “I love you, Yuuri. To hell with what the government says, I want to be with you.  My life is a lie without you in it, I know you feel the same; heck you and Sarah don’t even have kids yet, she’s a pretty girl she’ll find someone else.”

They kissed passionately, Viktor’s words running round and round in Yuuri’s mind. It was true, he did love Viktor, he’d married Sarah just to get their respective parents off his back.  They’d only had sex twice and he had hated it both times, whereas making love with Viktor was so easy, so right…

He made up his mind, ignoring the anxious feeling brewing in his stomach, “Ok, you get settled into the new house and I’ll work out away to break it to her, it may take a while. I don’t want people to notice that we have both left our wives at the same time.  If work get hold of this, hell, we will both get fired.”  He shifted, allowing Viktor to slip between his legs, “I love you Viktor, but we have to be careful.”

The silver haired man nodded, his eyes full of desire, “Yes my love,” he glanced rapidly at the clock, before burying his face into his lovers neck and muttering, “now, my one and only, what should we do with our last half an hour…”

Fandom: Yuri On Ice
Characters: Yuuri Katsuki, Viktor Nikiforov, Phichit Chulanont, TBA..
Genre: Vampire!AU, Romance, Angst
Rating: Explicit
Summary: Yuuri Katsuki has always lived a normal life. He thought everything was fine, until his relationship of two years ended suddenly. Now, having to pick up the pieces, and start over, his life starts to turn upside down.

Author Notes: Chapter one is finally complete. I’ll be starting chapter two very soon, but hopefully you all enjoy.

Yuuri: I’m Yuuri Katsuki and you are?

Viktor: Apparently not as straight as I thought I was

V: We would make the hottest sex tape in the entire world.

V: We are the two hottest people in the entire world. A sex tape of us would literally melt souls into magma

V: Wouldn’t you want to post it for people to see??

V: Um how about so people will see that I’m yours and be jealous.

Yuuri: We will have to create a distraction…are either of you good at jumping up and down and making annoying noises?

Viktor: *stands up* My time has come…

I had this random idea of kid Yuuri hugging a seal while sleeping. 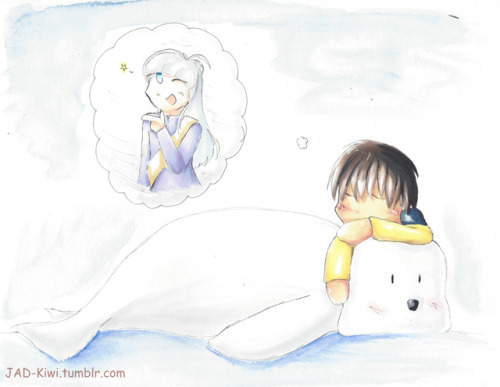 #yuri on ice, #YOI, #yuuri x viktor, #Jad's art, #seal, #why is the skin the most vibrant part
4 notes · See All
taeseobsbitchVideo

IF YOU LIKE ART AND MAKING GAY PEOPLE HAPPY READ THIS

so my soon-to-be fiance makes amazing art videos on his channel but he doesn’t get that many views and he made a video of yuuri and viktor and i know many of my followers would like it so could you please go check it out?

(also if you could spread this by reblogging i would be eternally thankful)
(btw we don’t make any money from the videos, it would just make us very happy if you could check it out!)
(wink wonk i am also in one of his videos, we do the whisper challenge, if you’re interested in seeing my face wonk wink) 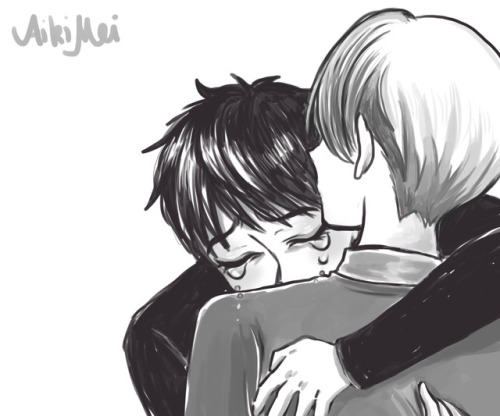