“We are going their to get my ship back! That stupid nitwit being their won’t stop me!” Pen growls. “I made a mistake on earth and now my ship is down their.”

“i am just stuck going.” Zel sighs before mumbling to themselves. “i really don’t want to go…to earth….” They pause before stating out loud. “its unlike you to admit a mistake~”

“……i am going to choose not to reply to what you just said.” Pen rolls their eyes before asking. “why do you feel stuck?”

“because you could just tell me what i want and i can be on my way…..but here i am…..” Zel responds. “did you forget our deal already?”

“…Do not accuse me of forgetting our deal! and how you promised to get my SHIP back.” they proceed to poke zel.

Hate when bitches don’t keep track of their worms, like bro, the bird population is in decline because of you

Also, what sucks is that not many get their worms neutered/spayed and there’s just feral baby worms eating whatever wildlife they can get, please be a good worm owner and get them fixed

“is? is that a smeet?” Pen questions as they look the screen over, wondering how a smeet of all things got in contact with them.

“it is a smeet!” Zel leans in closer as they wave toward the screen. “hello little smeet!!!!”

“Get out of my face!” Pen tries to push zel away, but its a waste of effort.

“Actually you may know the planet due to one resident being their…..the news of this “zim” being their has spread throughout the empire as the place to avoid, and zim is a very good reason to avoid it.” Pen shakes their head.

“I love exploring! little smeet i went to all kinds of fun places! you can’t even imagine some of the planets i went to!” Zel smiles

#he’s absolutely the kind of worm to chew on straws#also he can easily be contained with a laundry basket a few heavy books :’)#idk#dumb stuff#worm#worms#wormy#zel#digital doodles#digital sketches#sketches
9 notes
naufragos
Text

Hi there, sorry for the wait - here are my answers to your picks for the Important OTP Questions Ask!

17) Who is more protective?
Stunk for sure. He likes to pester her but if another customer tried getting handsy or even violent, he’d be first in line to take them outside. That being said, Meidri is pretty capable of taking care of herself!

23) Who thinks they are not good enough for the others love? and who’s more afraid of loosing the other? Who thinks they keep messing up, only for the other to tell them they don’t need to worry?
Stunk knows very well that Meidri’s too good for him, choosing only the most obnoxious of pickup lines to pass his flirting off as a joke. He’s secretly terrified she’d reject him if he got serious. In that sense, Stunk is pretty afraid of losing her - but Meidri’s just afraid of losing him. Whenever he’s away on long missions she worries and worries, even though she knows he’s probably just taking the scenic route through some brothel town or another.

When they finally get together the pair experiences ups and downs on both ends. Stunk is trying to shape up but it’s always one step forward, two steps back. Meidri has zero relationship experience and can’t help falling back on their old comedic violence routine despite how unhealthy it is. But they’re both earnest about staying together and always let each other know it.

9) Who wakes the other up in the middle of the night to tell them a cool dream they had? Who has the most nightmares, and who sings them back to sleep after?
Zel, definitely. He can’t resist chattering on about whatever weird scenarios his brain comes up with even if it means waking her up - they can just sleep in later, right!? I don’t think Zel would have many nightmares but he’d probably have trouble sleeping when he can’t stop thinking, so getting Mistue to sing him to sleep while using her lap as a pillow is the best. If Mistue has a nightmare she won’t be able to sleep properly until Zel’s holding her, even if it means waiting a few days for his next visit.

26) Who kissed first?
Mitsue. Kissing isn’t forbidden at succu-girl joints, but it’s not exactly common given how most customers prefer jumping straight to the main service right away. Zel’s visits on the other hand were always very leisurely - filled with playful flirting and casual conversation. Overwhelmed by how charming her favorite customer was, she couldn’t resist interrupting him with a kiss mid-sentence. 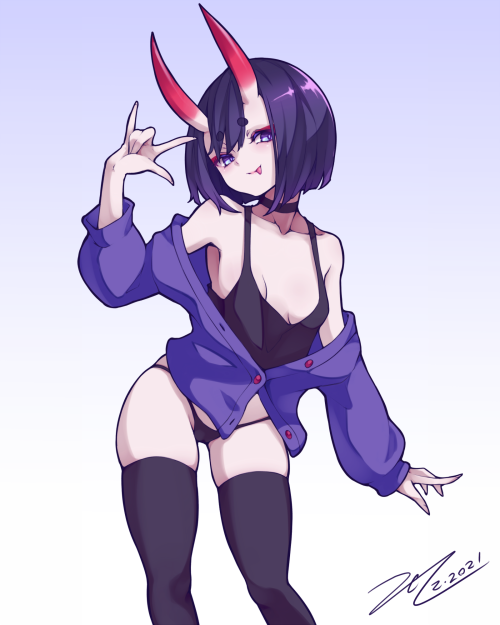 Here I am back at it again with this shit. More Zim X Zel because it’s my weird comfort ship don’t judge me