16. Bundle, wherein Jin Ling is drenched and Zizhen pulls out all the blankets.

17. Falling, where we skip a few years into the future with Jin Ling and Zizhen.

18. Crisp, wherein there is baking for Jingyi and grocery store adventures for Sizhui.

19. Windy, Sizhui’s supportive but very worried thoughts during the Head of the Charles Regatta.

20. Spice, wherein Zizhen comes home to a special delivery from the Berkshires.

21. Rustle, wherein it’s October 21st and that means something to Jingyi and Sizhui.

24. Gather, the actual calm aftermath of a Jin-Jiang-Lan-Wei-Yu Thanksgiving.

SiZhui: You’re forcing my mom side to come out. You’re grounded.

SiZhui: You have to sleep in your own bed for a week.

I love this moment

(We don’t monitor this blog. If you have any questions please direct them to our Twitter, thank you!)

JingYi: SiZhui, can I ask you something?

“What do you think, Lan Zhan?” Wei Wuxian asks, as the two step together to the edge of the bunnies’ glade.

A few feet away, sitting against a large tree by the edge of the creek that slithers lazily at one end of the clearing, are Lan Sizhui and Lan Jingyi, shoulders pressed close, heads piled on top of each other’s, asleep. Several fluffy, white bunnies have made their nests in and around the boys’ laps.

Wei Wuxian wants to squeal, and also capture this on paper, though he knows any picture he might draw will never really measure up to this level of adorable tenderness.

He tears his eyes away from the two boys, and looks up at Lan Zhan.

Lan Zhan, who has such a soft look on his face, it tugs even more at Wei Wuxian’s heartstrings. Ah, this husband of mine, he thinks, fond.

“We should let them sleep,” Lan Zhan says, voice low. “They’ve had a difficult night hunt, they must be tired.”

Wei Wuxian looks back, and nods. It’s not what he’d meant by his question, but there’s no point in insisting on it. Not yet, anyway.

Still, as Lan Zhan gently tugs him away, he whispers, wistful, “I hope they won’t wait as long as we did to be happy.”

It’s the only thing they can truly wish for, for their son.

Wherein it’s once upon a midnight dreary and Zizhen gets a rapping at his chamber door.

Wherein Jin Ling and Lan Xichen have a talk.

Sometimes you just need your mom. And her soup.

Wherein there are Crew Babies, the promise of a bunny trail, and the realization that the eldest peachick is growing up.

JingYi: Are we friends SiZhui?

JingYi: Dianxia, don’t pause like that. You scared me.

JingYi: I’m going to do a handstand!!

Part of growing up and living on your own was learning the true meaning of ‘just because you can, doesn’t mean you should’ as it applied to personal matters. Such as, just because Jingyi could eat an entire container of peanut butter chocolate ice cream for breakfast–because he was a legal adult now damn it, and no one could stop him–did not mean he should do it.

And despite the many jokes made by his friends and family members, Lan Jingyi was actually quite mature and rational. He had to be, considering the strange way he grew up. He’d always been stubbornly dedicated to his duties and his studies, he just refused to silence all the thoughts in his head. Traditions were traditions and should be respected, but traditions also needed to adapt to a changing world and Jingyi had zero issues telling his teachers and family leaders that to their faces and in writing.

So, yes, Jingyi understood duty and responsibility and strove to do his best at both.

Today it was cold. The first truly cold day of October. And it was pouring down rain. A borderline Nor’easter. They were just lucky a very early-season blizzard hadn’t decided to drop down on them. And he could deal with some bad weather, he could, he was a Lan after all, had done handstands for hours while writing out family runs and reciting them perfect diction, braced outside of school buildings on icy walkways. But still. Cold. Rainy. Perfect weather for napping and cuddling and not leaving the bed for any unnecessary reason. Especially when he knew Sizhui was still asleep, all warm and soft and cuddly in that bed.

It was not a hard decision to tell the world to fuck off and go back to his bedroom.

“You’re supposed to be tutoring right now,” Sizhui mumbled as he shifted next to Jingyi. He was barely awake, his hands reaching out to pull Jingyi closer.

“Canceled it,” Jingyi said. He pressed a kiss to the top of Sizhui’s head and then slid down next to him, practically laying on top of him. “It’d be both cruel and unusual to make anyone leave their home or dorm room in this.”

“Some people don’t have a choice,” Sizhui said.

“Thankfully I do,” Jingyi said.

The wind howled outside, rain pounding on the windows. Jingyi watched it all, content with his arms full of Sizhui.

“I already have the flashlights and candles ready,” Jingyi said.

He’d prepared everything after he finished texting with his student and confirmed the cancellation of their session. He loved their home in Boston, but a strong wind tended to knock the power out here and Jingyi was already looking at investing in a whole house generator. The winters seemed to be getting more brutal, and since they also usually housed some of his teammates, they needed more than just the tiny back-up generator in the garage that was probably older than both of them. Their gas bill would go through the roof, and it wouldn’t be a cheap job by any means, but it’s not like Jingyi or Sizhui were hurting in terms of financial success. And this wasn’t a frivolous cost. He’d contact Miss Luo in the morning. Jiang Industries had to know some good contractors for such a job.

He was so damn cute when he got that little pout and was that delightful combination of tired and bossy.

Jingyi loved him. So much.

“Okay,” he whispered, closing his eyes, and letting the sound of the rain and Sizhui’s steady breaths lull him into sleep.

a blue wish by ferrero13

A drunken night, a shotgun wedding, and three years of loveless marriage later, SiZhui and JingYi finally figure things out.

The Lans were a family full of traditions. It was part of their brand. Their selling point for the academy, all the connected businesses, and their reputation. Some of it was mere lip service, but most of their traditions still held weight and value and importance.

Jingyi had grown up under the watchful eyes of some of the most traditional and non-traditional Lans. For the most part he’d blossomed even under the various rules and restrictions. The Lan rules had been a guiding, steady force in a childhood that wasn’t always calm and steady. There were times where he didn’t know which relative’s doorstep he’d end up on, but at least he’d always known what standard rules were to follow in their homes.

It wasn’t just about language and behavior and how to dress and what foods to eat and to avoid. It was the other, smaller, more precious things to him in those traditions.

Traditions he now carried to his new life in Boston and his home with Sizhui.

Sizhui who had grown up with various Lan traditions, even though he’d spent his youngest years raised in a completely different manner from Jingyi–from most Lans. His fathers had combined their own values and imparted them on their son. Some Lan traditions were upheld, others were set aside, but all had shaped the glorious, miraculous person who became his Sizhui.

Jingyi was thankful this was one of the Lan traditions Sizhui’s fathers had passed on. It was one of Jingyi’s favorites. They couldn’t go home for the Mid-Autumn Festival, but that didn’t mean they couldn’t have a little ‘home’ with them.

It was already starting to get dark by the time they were both out of class, perfect for tonight’s plans.They’d been invited for the larger ceremonies with the Jins and the Jiangs, and would of course be attending the official family celebrations tomorrow. But tonight, the night before all the food, family, and festivities, they’d have this together.

Jingyi pulled out the paint, paper, wire, glue, LED ‘candle’, and the little boats they’d used to send out their lanterns on the water of the small creek that flowed on the edge of their property. That was a change in traditions. Growing up the Lans had gone with sky lanterns, until the fire code had changed–then they moved to hanging lanterns. Here in Boston, the water lanterns were far more common.

Jingyi smiled as Sizhui joined him, kissing the side of his cheek, before silently starting to work on his own lantern. They didn’t speak while they did this, didn’t need to. They leaned into each other while they worked, just taking comfort in the person beside them.

They held hands as they walked down to the edge of the creek. They both placed their lantern boats into the water, sending them off with silent wishes.

Jingyi kissed the top of Sizhui’s head as he hugged him from behind. He wished the same thing every year, and every year that wish stayed true.

Relationships were hard work–all of them–every kind–and Jingyi gladly put that work in, but there was no harm in asking for a little help from the Moon.

aw shucks, thanks for the well wishes, anon <3

In terms of ships, I possibly have a greater weakness for songxiao than I do for wangxian (see: the fact that the first fic I finished for this fandom was songxiao-centric). There’s just something about the subtle, understated way (I like to think they) come together, the wordless rapport, the alignment of their beliefs and virtues as a precursor to their relationship is something I really adore. And then, of course, the unfolding tragedy beyond that is both heartbreaking and fascinating.

@baoshan-sanren has single-handedly won me over to the nielan agenda, which I love because it has a ‘childhood friends-to-lovers’ arc with a healthy dose of battle couple

I’ve… discovered a soft spot for zhuiyi as well? This is, quite possibly, 90% driven by @kakikaeru’s fic ‘anyway, here’s wuji,’ which is my favorite multi-clan duckling contingent fic in existence. Again, also the vibes of “childhood-best-friends-to-lovers,” because I, as a person, am deeply invested in the development of relationships from a solid foundation of friendship beforehand. Just my personal preference!

Day Three: Harvest is up, featuring Crew Bros, and Nies, and pumpkins oh my.

Welcome to the rabbit warren, A-Yuan :) 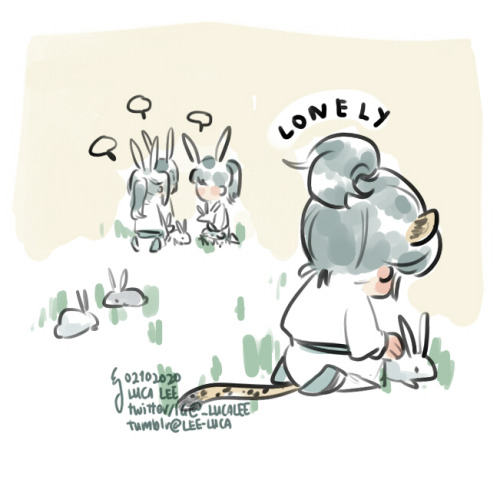 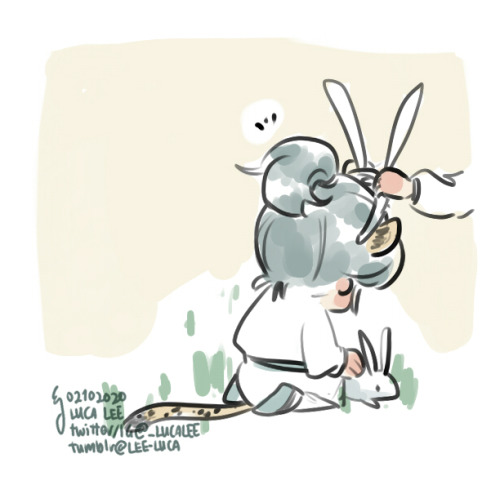 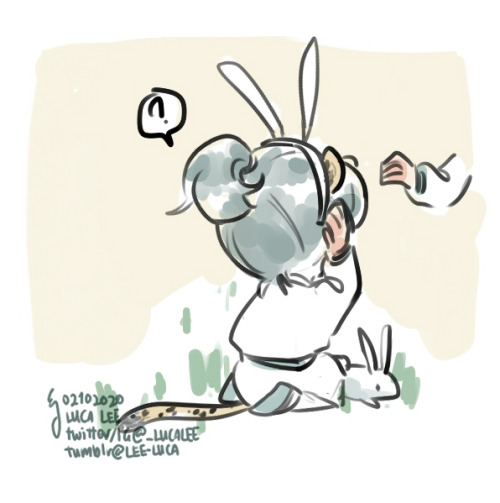 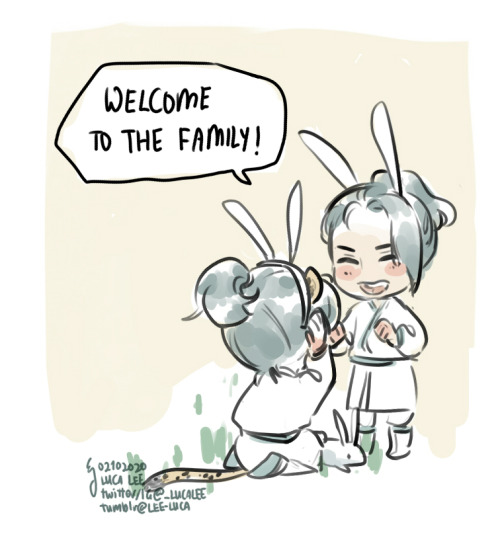