Grab one of my books on Cyber Monday for a reduced price! 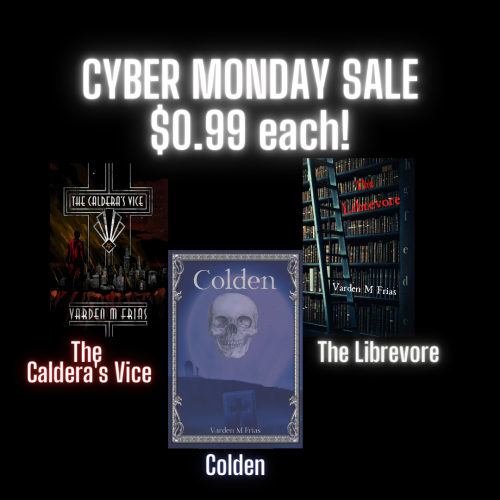 The Walking Dead #2 by Robert Kirkman and Tony Moore 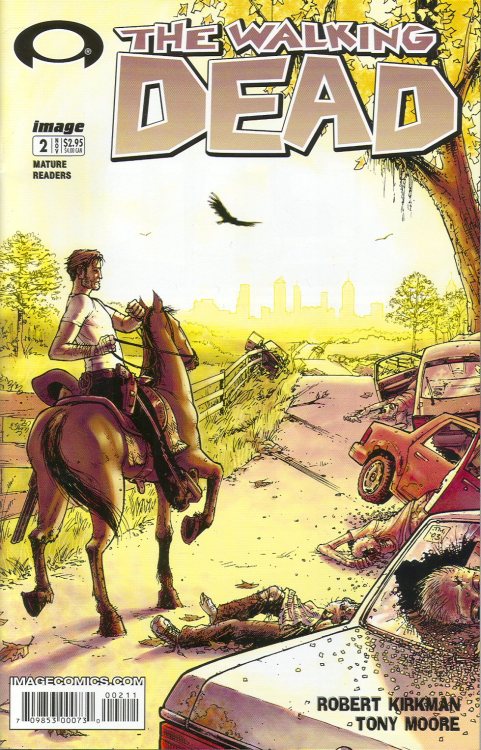 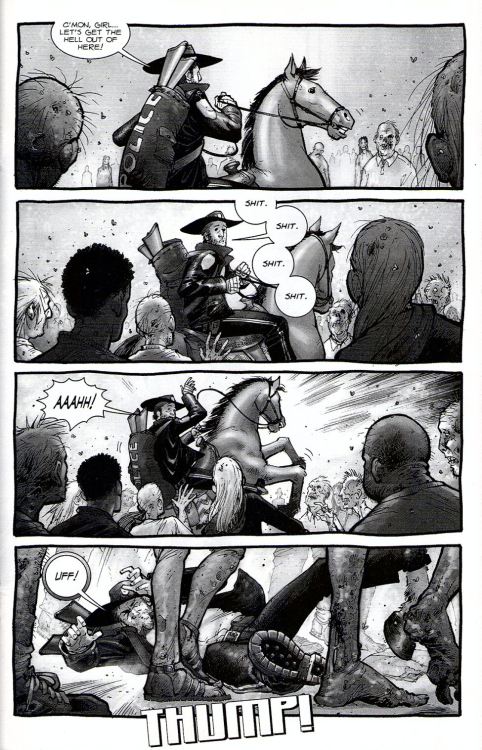 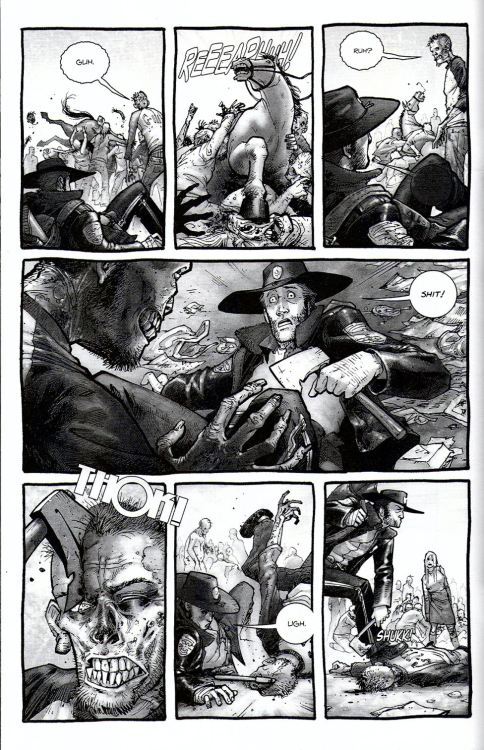 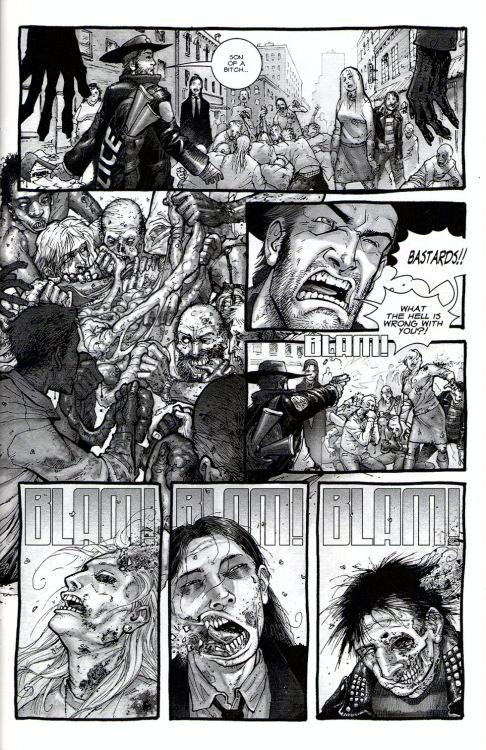 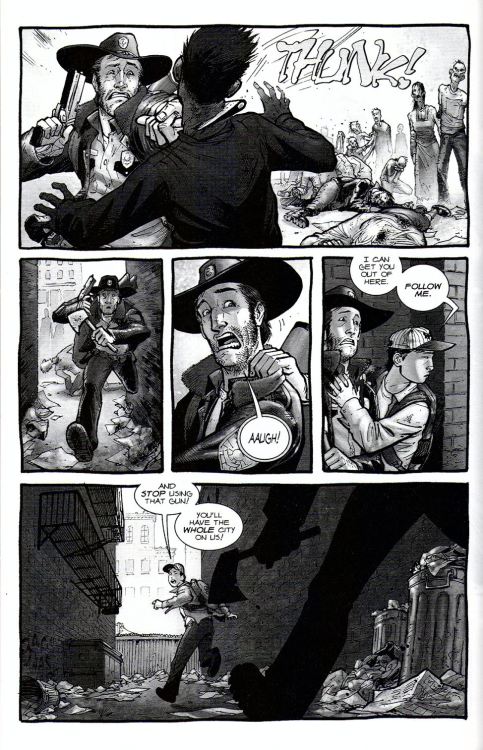 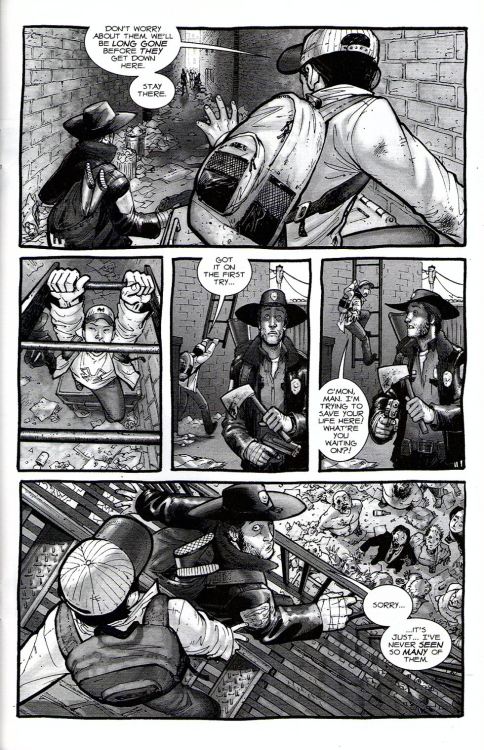 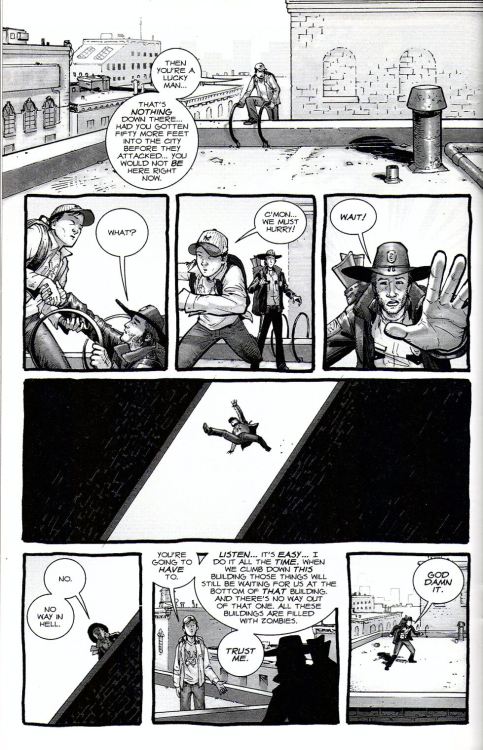 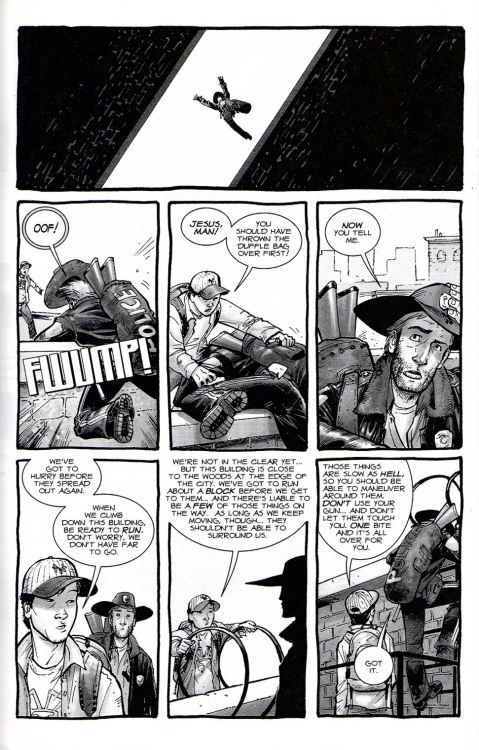 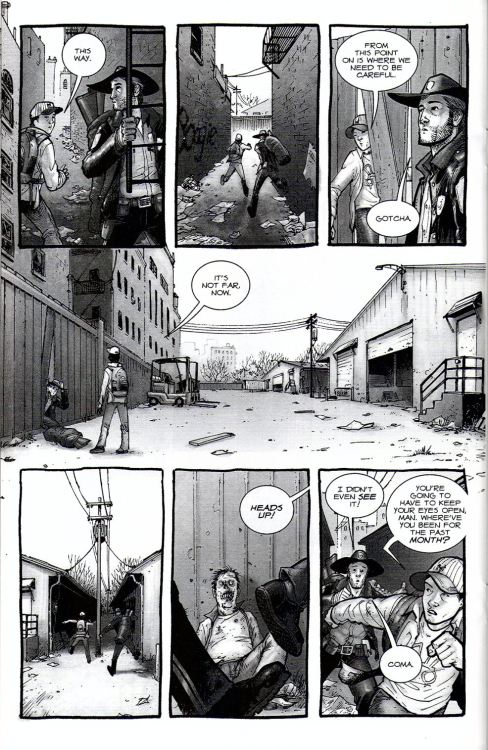 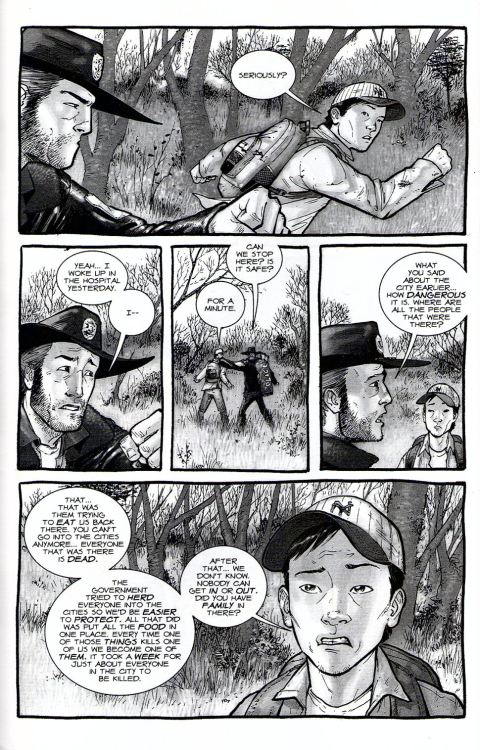 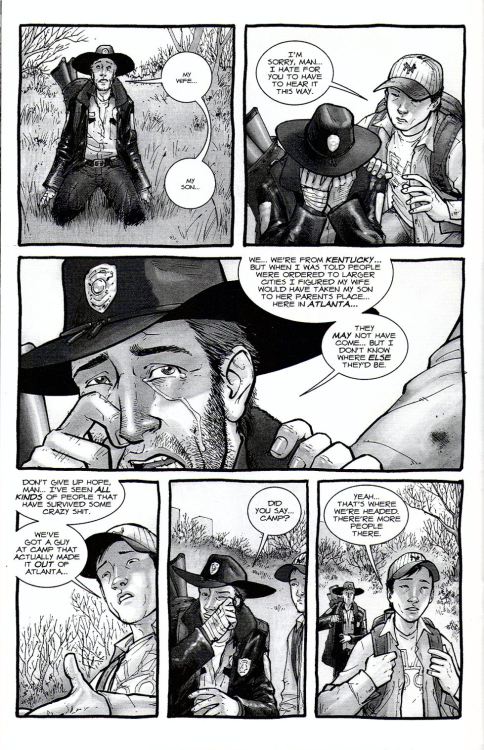 Hello it is 10:45pm and I am currently thinking about

New headcanon: he actually used to be a history teacher at Zombie Town’s school but it didn’t pay well compared to a job in Seabrook and the zombies’ schools just don’t have the money or resources or anything really that the humans have and it was kind of depressing

When he starts teaching at Seabrook and the human teachers question the choice because he isn’t a qualified teacher, as well as being a zombie, he can’t bring himself to say that he was a teacher because he still wasn’t officially qualified; that wasn’t something available to zombies, he only had that job because he was passionate about history, he had the experience and the knowledge ok let him teach why am I getting sad about Mr Zeck of all characters????

Is fucking a zombie…. necrophilia????

And, of course, Robert Kendo. Not even a joke, Kendo is quoted at least three times a day in my house. And where there’s Kendo, there is an entire city infested with zombies.

It was the beginning of their worst nightmare! Here’s Leon and Claire I painted from the awesome Resident Evil 2 Board Game

My sis is talented

A recent Magic the Gathering inspired commission depicting a lone Cathar taking on a swarm of zombies and werewolves on Innistrad 🐺.

“I just wanted to wait a little while before we talked. I’m from Atlanta. I’m a forensic psychiatrist. The state employed me to determine if certain people who did very bad things would do them again if they were released from prison. That was my job. Now I live here. Because of the state of the state and the whole world. What did you do or what do you do now?”

“What the hell does that mean?”

“Walkers, people, anything that gets anywhere near me, I’ll kill ‘em. I clear.”

“Because that’s why I’m still here.”

“Well…that’s the biggest load of horseshit I ever heard.”

“You see that blood on the end of my stick? At the sharp end? That was two men. Father and son, maybe. I stabbed one through the throat. He just fell to the ground with it stuck in him trying to breathe through the blood. Other one I strangled. No rope, just my hands. That was the day before I came here. Maybe– maybe the same day. I–I don’t know. But that’s what I did. That’s what I do.”

“You killed a lot of people?”

“They were threatening you? Attacking you?”

“You save anyone? You saved people.”

“I saw a wedding ring. You had someone you loved, didn’t you? Children? Oh. You loved them. You loved them a lot if you’re like this. You saw it happen. That’s how this started, right? It’s all happening right in front of your eyes over and over. Your body’s here, but your mind is still there. There’s a door and you want to go through it to get away from it, so you do and it leads you right back to that moment. And you see that door again and you know it won’t work, but, hell, maybe it’ll work. So you step through that door and you’re right back in that horrible moment every time. You still feel it every time. So you just want to stop opening that door. So you just sit in it. But I assure you, one of those doors leads out, my friend.”

“I don’t have any friends.”

“Because I have to clear.”

“See, that’s the thing. You don’t. We’re not built to kill. We don’t have claws or fangs or armor. Vets that came back with PTSD, that didn’t happen because we’re comfortable with killing. We’re not, we can’t be. We feel. We’re connected. You know, I’ve interviewed over 825 people who’ve done terrible things. I’ve only met one evil person. Some of them were born with bad brains. Some of them got sick along the way. The rest were just damaged people. Traumatized themselves like you, but they could heal. Some more, some less, but they can. We all can. I know it. It’s all a circle and everything gets a return.”

“That was aikido. That’s how I kicked your ass earlier. Well, that’s how I redirected your ass. The people in prison I evaluated for the state, the stories I heard, the things these people did. One night my five-year-old daughter found me crying in the garage after about eight beers. Told her I wasn’t feeling too good. She gave me this. She had won it at a carnival at school that day. She said it’d make me lucky and I’d feel better. The next morning I found a flyer for aikido. Damn thing worked.”

“Your wife and your daughter…they’re dead.”

“It was aikido. It’ll help. And you obviously need help if we’re gonna make this trip. Can’t just be me and you to the end. You’re a shit conversationalist. And I can’t make this trip by myself.”

“Why do you have a cell in your cabin?”

“Built this place with my wife a while before my daughter was born. It didn’t have a cell back then. That was just the other side of the living room. In my job I interviewed 800 men and 25 women convicted of awful things. Stuff from the darkest part of the human soul. I was evaluating a man by the name Crighton Dallas Wilton. Name like that, sounded like he should own an oil company and wear a big hat– Crighton Dallas Wilton. Despite doing some truly unspeakable acts, he was up for parole. And he was one of the most damn likable people I had ever met. He said all the right things, he went to therapy. He wrote letters to the prison board to start a program to grow flowers for the waiting rooms in state hospitals, rest homes. And I saw right through him. Saw that he was a true psychopath, that he knew how to play people, exactly how to play people. I was interviewing him next to the cafeteria. The place smelled of industrial pizza. They were polishing the floor. I had to shout my questions half the time. And there was this moment. Can’t even remember the exchange. But right then I knew that Crighton knew that I knew exactly what he was. Everything he had said, done to hide away what he was from everyone, from himself, just slipped away, and… and that model prisoner of 10 years stood up, smiled, and just cracked me across the face. His fist felt like a rock. Then he was on top of me and the floor polisher next door was thudding out every sound. And I– and I saw his face, his– his eyes, his evil. Mask had slipped. And he was gonna kill me right then and there because he knew I would make sure he would never get out again. Arm bar counter for being choked from a pinned position. Aikido. I wasn’t taking it for self-defense, but it saved my life. And I got to make sure he never got out again. Well, got to try. He got out. Talked to the right people who got him the right things and he broke out, but it wasn’t to escape. Crighton Dallas Wilton went to my home and killed my wife, my daughter, and my son. He walked down the street to the police station around the corner covered in their blood. He surrendered. Said the only reason he broke out was to destroy my life. A year passed and he was still working those plots. They just let him work those plots by the roads out by 85, grow chrysanthemums, forget-me-nots. I built that cell with the full intention of bringing Crighton Dallas Wilton here, putting him behind those bars and watching him starve to death.”

“I have come to believe that all life is precious.”

“Even for a man like that? Who did that to you? To your family?”

“I have come to believe that all life is precious.”

“Well, like I said, they… let him work the plots beside 85. Even after what he did. They let him because he was so damn charming. I found out the schedule, waited, made sure the right people were working. I got him in my car quick and brought him back here. If the’d caught me, it’d have been fine. It’d have been better. But I got him here and they didn’t know where to look. I put him in that cell… and I let him starve to death. It took 47 days. And then I was gone. I was where you were. And I wasn’t trying to open up the door anymore either. What I did to him, it didn’t give me any peace. I found my peace when I decided to never kill again. To never kill anything again. When I decided to settle things and went back to Atlanta to turn myself in. That’s how I found out the world ended.”

“But the world hasn’t ended.”

This is bits and pieces from throughout the episode of conversations between Morgan and Eastman from The Walking Dead. Season 6 Episode 4 “Here’s not Here”. There’s definitely so much more throughout the whole thing but these are the main bits. I felt that I needed to share this. I recommend watching the episode for the full emotional effect, and the whole show if you haven’t already.

holding a wolf by the ears; skippy @dastardos can probably explain this better but basically it’s a novelization of an mcyt rp!! im only a few chapters in but plot has smth to do w a zombie apocalypse