We looked inside some of the posts by takaraphoenix and here's what we found interesting. 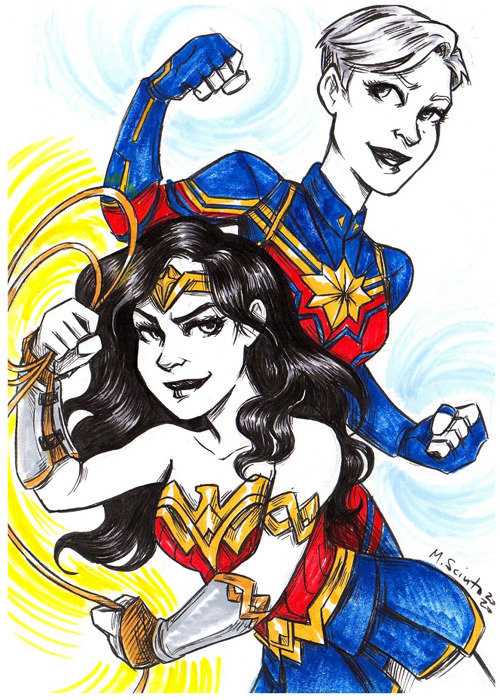 #this team up, #would be too powerful, #Diana Prince, #Carol Danvers, #the raw manic bisexual energy, #that those two radiate, #amazing, #DC Comics, #Marvel
25 notes · See All
takaraphoenix·4 hours agoAnswer

Am I the only one who has ever thought of Luke/Jace? Yes? Ok.

*checks AO3* Well, considering the whole whooping two (2) fics in the ship-tag, I’d say you are not the only one, but…the number seems very, very small. I’d advise reading those fics and really backing those authors to make them feel heard by the shippers who share this very very tiny ship with them because not feeling like you’re screaming into the void is really motivating for writers to produce more of that. ;)

Other piece of advise that always works for me with non-existent ships: WRITE IT YOURSELF! Be your own producer of the thing you want to see and thus lure other people into the ship with you. Sure worked for me on… many rarepairs. xD

#Shadowhunters, #Shipping, #Luke x Jace, #as someone, #who doesn't ship this, #I can't be more help, #than giving you this advise, #Anonymous
2 notes · See All
takaraphoenix·7 hours agoPhoto

This is my first fanart and digital art ever, please be gentle! 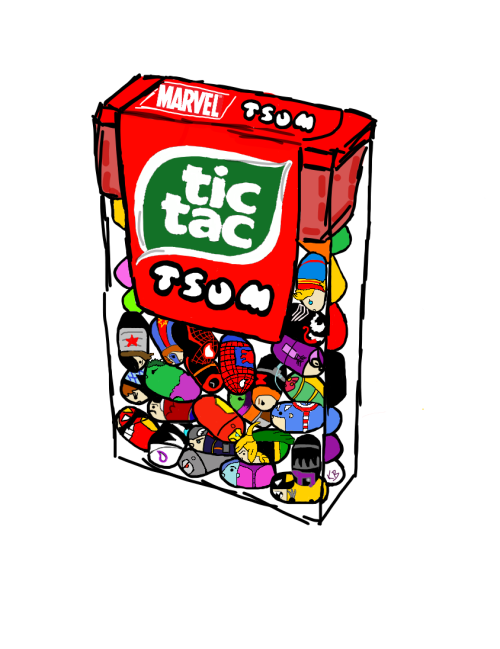 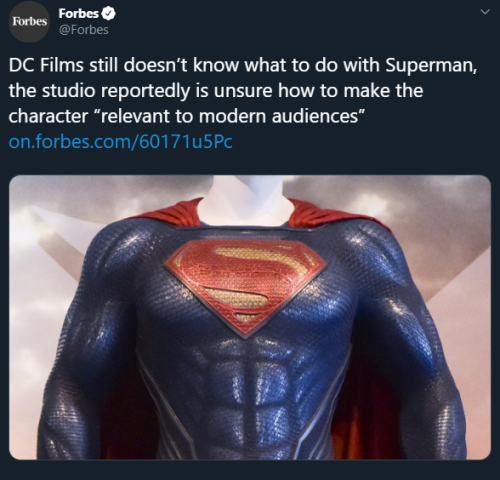 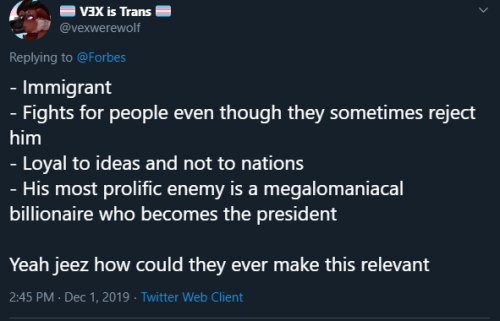 The Tribes of Kumandra

In Raya And The Last Dragon, the film is set in a fictional fantasy land called Kumandra, inspired by Southeast Asian cultures from Thailand, Vietnam, Cambodia, Myanmar, Malaysia, Indonesia, Laos, and the Philippines. The production team traveled to the aforementioned countries in order to gain inspiration and portray these diverse nations respectfully through attention to detail in the design aesthetics of the characters, costumes, architecture, and landscapes.

#in regards to that last anon, #who said Raya looks like Korra, #here's a neat list, #of cultures this movie is inspired by!, #things inspired by the same cultures, #tend to look similar in design, #because that's what, #the cultures that inspired it, #look like, #that being said, #Raya's lil sneaky spy outfit, #is literally the ONLY THING, #ressembling Avatar, #look at these, #they look amazing, #all the favious face designs??, #(just remember, #how Disney reused, #Rapunzel's face, #for Anna Elsa AND their mom), #I'm so freaking glad, #they didn't just lazily, #copy/paste for minor characters here, #I am sooo looking forward to this movie, #Raya and the Last Dragon, #Disney
97 notes · See All
takaraphoenix·9 hours agoText

So I do like the new tumblr activities feature where you can set a filter so you directly see when people put tags on a reblog. That’s neat.

But… why is the “which notifications would you like to look at? mentions? reblogs? likes?” thing… not… also a filtering option for the activities page? I don’t much dig that up in the lightning-bolt drop-down menu, that’s a bit… weird.

Also, I do wonder if there will ever be a feature of “only original posts” because… I’ve… literally never cared who liked/reblogged that Disney movie GIF set I had in my queue and being able to sort the activities page by “posts I actually made” and “posts I just reblogged” would be a great addition, actually.

I dont know if you have answered this before but out of all the Percy Jackson ships, which ones is your OTPs?

Most likely multiple times at this point, I suspect. But have some lists, because honestly, order and which are included change with both time and my mood! xD

My overall OTP, though it seems rather obvious I’ll still mention it, is Nico/Percy.

What's your favorite headcanon and canon moments of Percico/Nicercy?

Favorite canon moments are basically Battle of the Labyrinth. Like. All of it. Nico being still so angry but so incapable of letting Percy go and leaving him in potential danger? Percy having spent months trying to track Nico down, never giving up on him? Bianca matchmaking trying to mend things between them?

Also, most definitely that time Hades locked Percy up in a dungeon and Nico just flat out went “yeah no” and freed Percy and then proceeded to convince Hades to join the war and fight with them?

HoO sadly (and weirdly enough, considering that’s the one where Nico’s feelings are actually put into words…) didn’t give us much for them? But hot damn, Lord Hades, King of the Underworld, being So Done because his son kept talking about Percy? That was quite honestly more confirmation on Nico’s feelings than his confession to Cupid had been, I mean seriously he’s been talking to his dad about his crush and his dad is freaking Hades. After everything and all the annoyance he put up with Percy Jackson, Hades now had to listen to Nico most likely waxing poetry about Percy’s eyes or some shit? Amazing.

Favorite headcanon moments? That seems kind of… vague? I mean, that time they actually get together. And that time they get married. I also love that thing where they just get to retire into demigodly suburbs and raise their kids in peace. And, of course, Nico being super nervous about meeting Paul and Sally for the first time as Percy’s official boyfriend, but just getting hugs.

Is it just me or does the girl in the new movie post that you shared (Raya??? Something about a dragon???) look similar to Korra from Legend of Korra? She reminds me of the waterbenders at the very least

Raya and the Last Dragon! And yes, everyone has noticed the similarities in design to Korra, I think. xD

I am so looking forward to this movie though. First Disney/Pixar movie since Coco that I am just genuinely so freaking excited for (not counting Ralph Breaks the Internet because let’s be real, I wasn’t excited for the movie, I was excited for the princess scenes).

I already love her animal side-kick? It is adorable. And she’s gorgeous. And seems to be a badass. Can’t wait to meet her properly. *^*

Reblog if you know this song.

Or just for Sue from catering

#this gives me a special kind of endorphines, #10th Doctor, #endorphines, #I miss him, #gosh this was such a delight, #Doctor Who
97K notes · See All
takaraphoenix·11 hours agoPhoto

Excellent! But I feel like it’s worth pointing out that the Boomer in question was ALSO ON HER PHONE. How else did she take that picture and then post it on twitter? The double-standard of being on your phone yourself for the sole purpose of publicly shaming others for being on their phones is baffling.

And before that, she was more interested in watching and judging other museum visitors instead of paying attention to the art too… 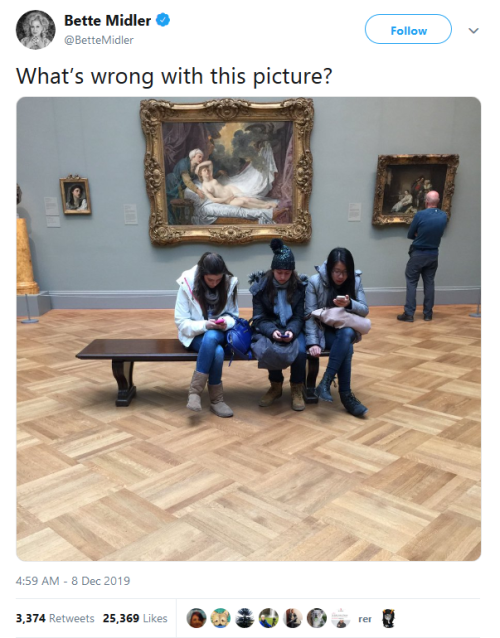 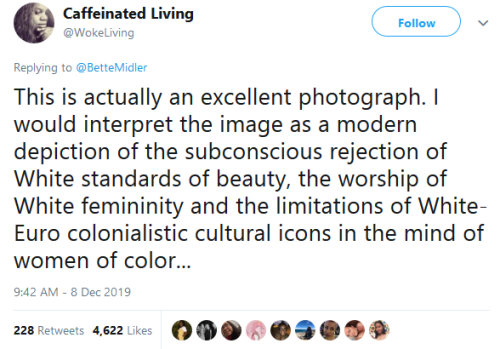 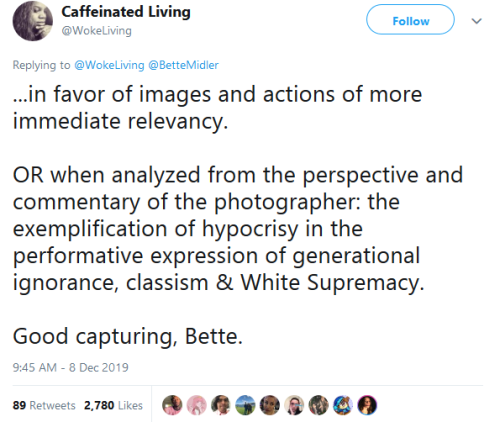 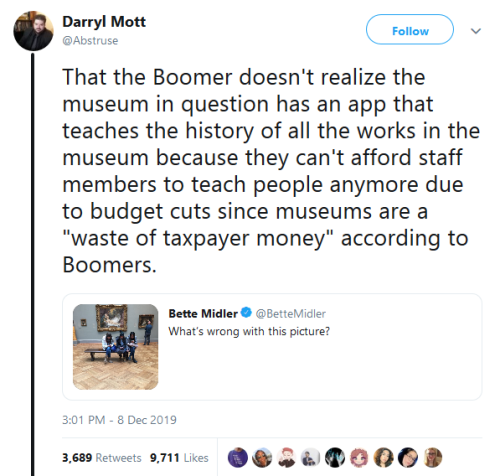 laura’s endless list of favourites ● dynamics ➼ harry potter, ron weasley & hermione granger
“There are some things you can’t share without ending up liking each other, and knocking out a twelve-foot mountain troll is one of them.”

Someone should have already told you that. (x)

make me choose →  asked by @sluttysuperheroes
↳brave or the little mermaid?

The very first time I saw you, Harry, I recognized you immediately. Not by your scar, by your eyes. They’re your mother’s, Lily’s. Yes, I knew her. Your mother was there for me at a time when no one else was. Not only was she a singularly gifted witch, she was also an uncommonly kind woman ― she had a way of seeing the beauty in others, even, and perhaps most especially, when that person couldn’t see it in themselves. Your father, James, however, had a certain, shall we say, talent for trouble. A talent, rumor has it, he passed onto you. You’re more like them than you know, Harry. In time you’ll come to see just how much.

Harry Potter and the Prisoner of Azkaban (2004) dir. Alfonso Cuarón

“Out of all of them,” he said again, in the same low voice, “I thought you were the most like me.”

#Shadowhunters, #Isabelle Lightwood, #Jonathan Morgenstern, #I would have LOVED, #if they had explored this more, #I think Jon shoulda, #stayed as an undercover Seb, #for a season, #big reveal at the end, #stretch it out more, #show him in the Institute more, #develop his dynamic with Izzy
26 notes · See All
takaraphoenix·15 hours agoPhoto