We looked inside some of the posts by thunderpot and here's what we found interesting.

Is there anywhere I can look at all of your art? 🙂

haya noony! The best place to look at my art is right here! This art tumblr is where I’m most active, from doodle to more finished art [it does happen that when I’m a tad busy I don’t post here often, but once my schedule is a bit more free I’ll come back to the usual activity ´v`].

Based on Bones. Similar stuff and stuff that were never there either. Do not expect much from it.

As promised, I’m organizing all the tags+the other things I didn’t say before in a bullet point fashion for convenience haha. Watch out for a wall of text. I will keep links to the doodles when/IF I do them, and whenever I think of anything for this AU I’ll update this, so take it as a masterpost of sorts?
Also please do not expect me to actually write anything for it, I just like to have fun thinking about AUS, so feel free to work on top of it if you’d like!

Basic summary: A genius anthropologist and a special agent go around solving crimes together+ glorious slowburn

haha yeah! Coincidentally, I’m re-watching bones this year [once more, again, one more time lmao] so this au is relevant again, I guess! 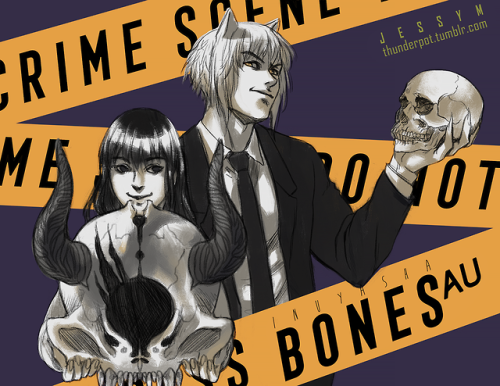 how old will kagome be when she bonds with inuyasha in aurora?

#aurora, #aside from the obvious non-humans, #the humans start around 25-28, #so she will bond with him during what I personally consider to be our prime, #the 30s haha, #Noony
7 notes · See All
thunderpot·15 days agoPhoto

Here’s something unexpected! These were experimental commissions I did a while ago for @imperatortez of his Danganronpa OCS using a similar style to the franchise! it was a very welcomed change and a fun little challenge!

If you’d like me to do your ocs, a scene of a fic or any other pretty custom drawings, check out my commission info! 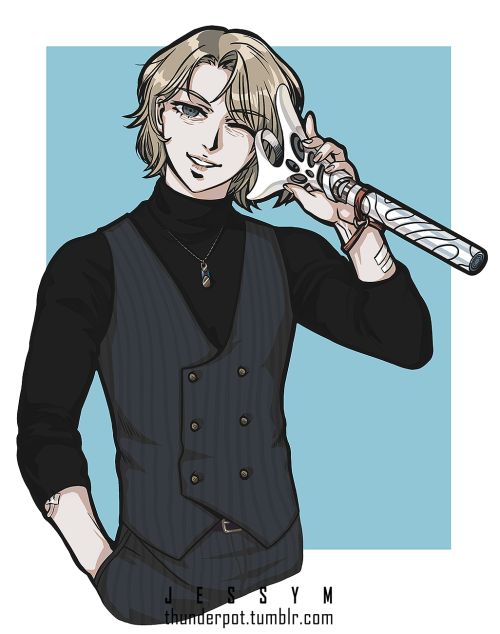 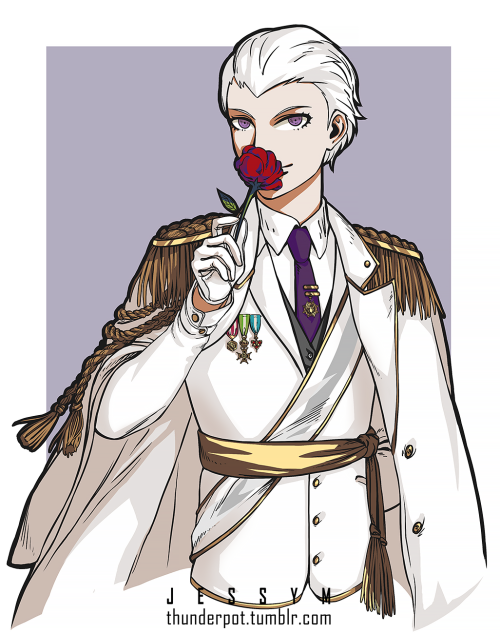 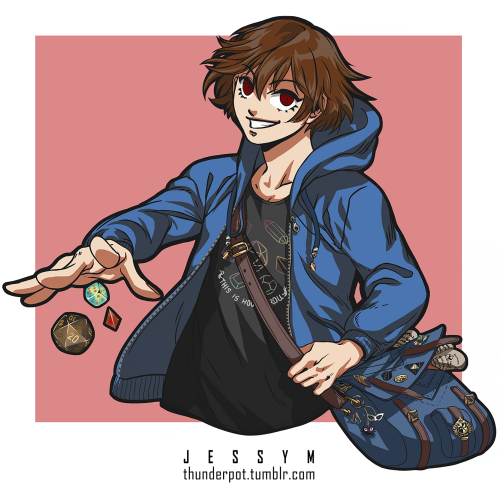 Since this Monday I will post my comissions list for everyone interested on it, this is just one of the ideas I’ve been wanting to offer, and since I did one for my dear friend and posted it, it’s fair I show this to everyone too!

I’ve been wanting and planning lots of ideas for fanfic writers, because without you guys and all the inspiration you give me, I’m not sure how far I would have gotten into the fandoms I love. So, working together is always a pleasure.

Just a heads up, I accept fandoms that I’m not in, if you enjoy my style and want to talk about it, I’m here.

Thank you for the space and always being here for me. I’m always open to talk about price and design, so don’t be shy, I don’t bite!

are you liking yashahime?

As a matter of fact, I am, noony! I was actually surprised by how much I’m liking it. But I don’t think it will be for everyone. Detective plot with non-linear timeline isn’t everyone’s cup of tea - and I can see a bunch of people are already confused af with it haha. But to me it has been a solid start so far!

when will we see more aurora?

hopefully when I’m done with commissions and the part that won’t be released on tumblr, noony!

A post-canon series of long form, one-shot-style chapters about Kagome’s return to the Feudal Era, and their lives after her return.

Preview of Chapter 2 - Our Bond

“ Miroku moved to pour the sake into each of the cups that had been placed on an alter before them, ensuring that Inuyasha’s had not been purified.

As they each took their sips, Kaede continued, “Let this sake purify your body and minds, so that you may proceed with clear thoughts and hearts.”

They finished their sake, and she asked, “Of what shall you offer to the gods as a promise to them of your vows here tonight?”

Inuyasha turned to Kagome, unsure of what Kaede was taking about. He was surprised to see her reaching over and gently touching the beads still hanging from his neck, a bright blush across her cheeks. Realizing what she had intended, Inuyasha smiled and nodded, allowing Kagome to gently pull the beads over his head. Audible gasps from the villagers were heard in the distance, though Kagome and Inuyasha paid them no mind, lost in their own world. Kagome lovingly took the beads, reaching for his hand once more, and wrapped their hands together with them. She raised their hands to Kaede, the beads binding them, as they always had. Inuyasha smiled tenderly as they turned back to Kaede.

“Oh great and powerful gods, may this offering be blessed and be a symbol of their everlasting commitment to one another,” Kaede professed. The beads began to glow a heavenly bright hue. Inuyasha, momentarily fearful that he was going to be purified by them, was assured by the loving squeeze of his hand that Kagome gave him. Her eyes spoke, as if saying, “It’s alright.“ “

Chapters 1-6 are currently available to read in full on my fanfiction.net page, though I’ve temporarily paused on writing new chapters until more of Hanyo no Yashahime has aired. Warning: chapters 2, 5, and 6 all have mature content.

I’m absolutely smitten with the cover image (drawn by the amazing and wonderful @thunderpot). She’s captured just the vibe I was going for with my fic, and, if anything, improving upon it. If you aren’t following her, go… right now, and follow her tumblr or IG! Her stuff is amazing, and I am so impressed with her Inuyasha redraws. She’s currently offering commissions as well (which is how I got this beautiful piece), so go support her if you can!

Weeee I’m so happy to have done this piece! Thank you so much for trusting me, @theundeadfandom! If you guys didn’t read it yet, go do it right now!! This scene got me the FEELS you don’t understaaanddd!

And if you’d like a custom pic for yourself or your story too, you can check out my commission info! 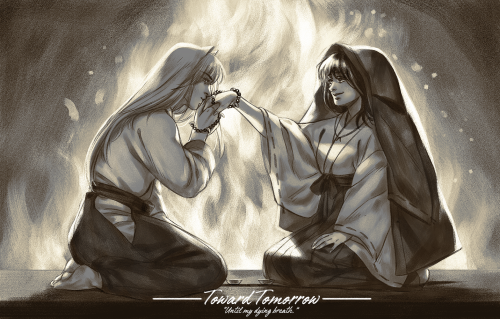 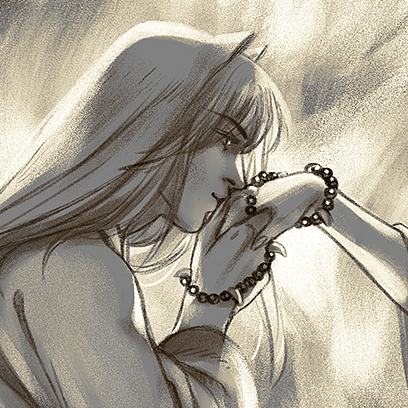 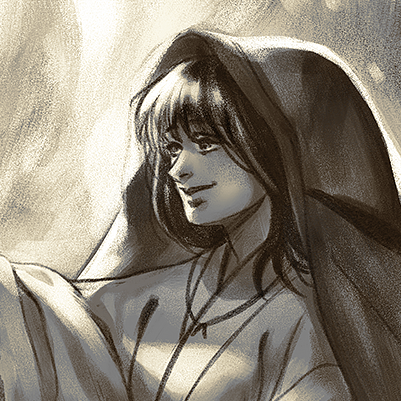 there is something i have been wondering for a while now, your art style remainds me so much of this comic i read a while ago, it was about inuyasha and kagome had already defeated naraku and kagome was having bad dreams and also knew how to fight because she learn boxing (or smth like that), and that's all i remember honestly but are you the author or its just my imagination?

Ooh this sounds super interesting! I am not the author, however.

If anyone knows, please share the source so we can all enjoy it together!!

First of all thank you so much to all of you who have been showing your love and support for this fandom. The quarter just started a few days ago and already we have some authors/artist that have maxed their quota.

Remember, our limit is two works per creator and two categories per single work (so in theory the most category nominations a single creator can receive in a quarter is four).

So, to help out people who still hasn´t made their nominations we made a compilation of the creators who have reached or are approaching the nomination quotas:

Waaaa congratulations everyone!!! So many amazing names in there! And wow thank you so much to whoever nominated me! I know I’ve been a bit absent (life being life) but I’m truly honored any of you would think me worth nominating again!

#it is a prize in it's own way, #feudal connection, #I also sww there were 2 other posts, #i'm so sorry if I haven't answered anyone!, #i didn't get the notification cause tumblr being stupid, #i appreciate you all and it really warms my heart!!
49 notes · See All
thunderpot·25 days agoPhoto 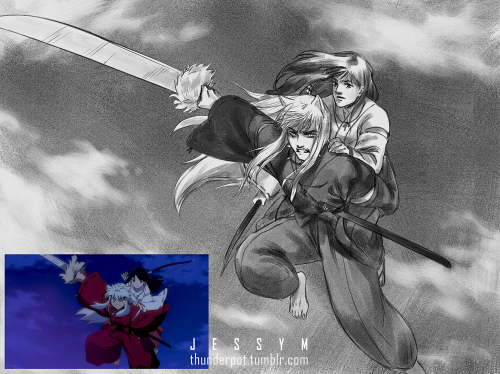 I have one or two screencaps from yashahime I want to redraw. Let’s see if I can do it tomorrow!

#inuyasha, #good episode, #I have my rants about it, #but overall ok introduction
28 notes · See All
thunderpot·a month agoPhoto

I wonder what they’re talking about! 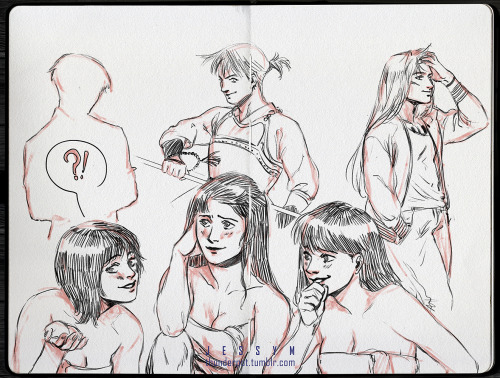 your art has me like *clutches hand over my heart* wow 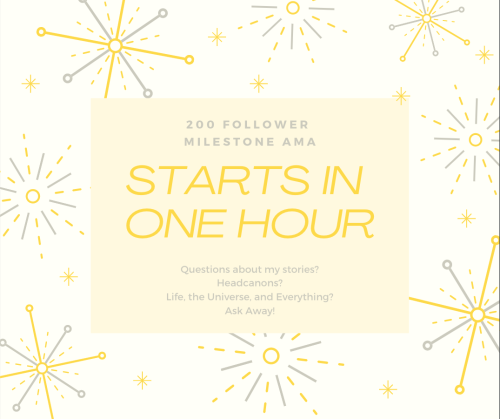 #shout out, #pixie should have waaay more followers ya'll sleeping on QUALITY CONTENT, #GO ASK HER ALL THEM STUFFS, #AND THEN SOME
16 notes · See All
thunderpot·a month agoPhoto

“Not at all.” Kagome answered, their eyes meeting. “There’s plenty of beauty in embers.”

My take on that beautiful scene. God I just love that little moment so much /gross sobbing 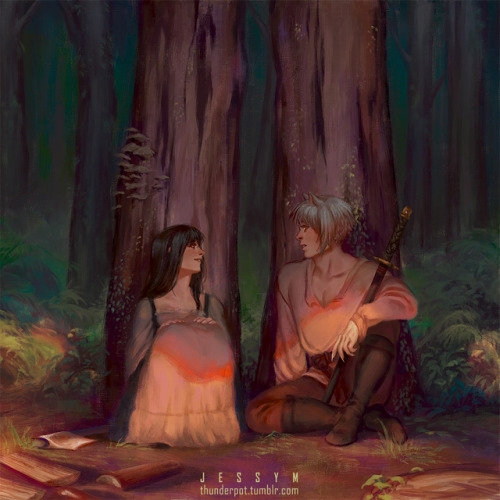 #reboop, #inuyasha, #kagome, #inukag, #enchanted, #akitokihojo, #bringing this baby back because I love it so much, #god how good it is /gross sob
1K notes · See All
thunderpot·a month agoAnswer

I just want you to know you are absolutely amazing, I admire your art so much, and ... I may have been just stalking your pixiv

Aww thank you so much, Nartista! You flatter me. I honestly appreciate you like what I do! On pixiv ahsaoiruhs I kinda need to update it there, huh 8′D…..

#I think the last thing I uploaded there was 'Grief', #since then there's been a couple more things, #but I haven't had the time to properly update, #nartista
6 notes · See All
thunderpot·a month agoPhoto 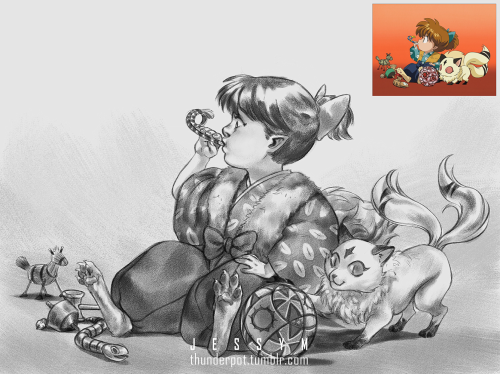 #inutember, #sketchtember, #shippou, #kirara, #inuyasha, #edited to fix something that was really bothering me!
228 notes · See All
thunderpot·a month agoAnswer

new PV of Shaman King is out. short video but now we know it'll be out April next year

haisoaurhaoiusASAHRAORIAUHRHAWGAh HOLY SHIeeet music is on point HAO FIERCE, ANNAAA KILLING WITH HER EYES ONLY YOU GO QUEEN the animation looks so good as well?? It’s 3am so I can’t scream - instead I gave little jumps in my seat but AAAAAAH

new PV of Shaman King is out. short video but now we know it'll be out April next year

haisoaurhaoiusASAHRAORIAUHRHAWGAh HOLY SHIeeet music is on point HAO FIERCE, ANNAAA KILLING WITH HER EYES ONLY YOU GO QUEEN the animation looks so good as well?? It’s 3am so I can’t scream - instead I gave little jumps in my seat but AAAAAAH

#and this is me dying thank you for coming to my ted talk, #peace, #Noony
21 notes · See All
Next Page