We looked inside some of the posts by unaesthetic-studyblr and here's what we found interesting.

What even is this essay that’s due in a couple days about? 2k-end-of-19 🙃 yay finals.

Most aesthetic photo I’ve posted <3 I love this boy!

#so aesthetic, #this is the best boy, #his name is walter, #i love dog sitting, #alos reasearching rn, #anyone know something interesting about the insanity defense?, #homework, #research, #college, #coffee, #law, #insanity defense
0 notes · See All
unaesthetic-studyblr·5 months agoText

Really looking forward to my midterm in 15 minutes 🙃🙃🙃🙃

Professor: late work will not be accepted!! >:|

#college, #coding, #compsci, #due dates, #hard due dates, #strict due dates, #but like i love the professor, #studyblr
0 notes · See All
unaesthetic-studyblr·6 months agoText

rb this with ur opinion on this shade of pink:

This is magenta, and not pink. Unlike pink, magenta doesn’t actually exist. Our brain just invents magenta to serve as what it considers a logical bridge between red and violet, which each exist at opposite ends of a linear spectrum.

TL;DR this color is fake (and also I hate it)

Wait til you learn about Stygean Blue

Your brain is a badly-designed hot mess of bootstrapped chemistry that will tell you that all kinds of shit is happening that has no correlation to physical reality, including time travel. It just makes things up. Your brain is guessing about what’s happening when your eyes saccade, what’s happening in your blind spot, and what the majority of the visible light spectrum looks like, and you don’t know it’s happening because it doesn’t aid your survival to become aware that a lot of what you see is fake.

The human eye only has three types of color sensitive cones, which detect red, blue, and green light. Your brain is making up every other color you perceive.

Let’s have a little fun with that thought. This is the visible spectrum of light.

You will of course note that yellow is on the chart. Yellow has a discreet wavelength, and is therefore a distinct physical color. But we can’t see it.

What we call yellow is just what our brain shrugs and spits out when our red and green cones are equally stimulated. We have light receptors that can pick up on the physical spectrum of light we call yellow: that’s why yellow things don’t just look like moving black blocks to us. But your brain has no fucking idea what the color yellow looks like.

Some animals have eyes that can perceive the color yellow! Goldfish have a yellow cone in their eyes. If they could talk, they could tell us what yellow looks like. But we wouldn’t be able to understand it.

What your brain actually sees of the color spectrum:

We can measure the wavelength of light, so we know that when we see ‘yellow,’ we are seeing light in that 550-ish nanometers range. But we don’t have a cone in our eyes that can pick that up. Your brain just has a very consistent guess about what color that wavelength of light could be. We decided to name that guess ‘yellow.’ We can’t imagine what yellow really looks like any more than a dog can imagine the color red.

Here’s the funny thing: your brain is never perceiving just one photon of light at a time. Something like 2*10⁸ photons per second are hitting your retina under normal conditions. Your brain doesn’t individually process all of them. So it averages them out. It grabs a bunch of photons all coming from the same direction, with the same pattern, and goes, “yeah, that cup is blue, fuck it, next.”

That’s how colors blend in our eyes. So sure, if a photon of light with a wavelength of 550 nanometers bounces into our eyes, we see what we call “yellow.” But if we see two photons at the same time, coming from the same object, one of which is 500 nms and the other of which is 600 nms, your brain will average them out and you will still see yellow even though none of the light you just saw was 550 nms.

So how does magenta factor into this?

Well, as we’ve just established, when your brain sees light from two different slices of the visible light spectrum, it will try to just average them together. Green plus red is yellow, fuck it. If it’s more red than green, we’ll call that ‘orange.’ Literally who gives a shit, we’re trying to forage over here. There are bears out here and it’s so scary.

What happens if you take the average of blue and red light, which we perceive to be magenta? What’s the centerpoint of that line?

Hey, that’s not gonna work? We live on a planet where EVERYTHING IS GREEN. If something is NOT green, that means it’s either food, or a potential source of danger, and either way your brain wants you to know about it.

So your brain goes, WHOOPS. Okay - this is fine. We already made up yellow, orange, cyan, and violet. We’ll just make up another color. Something that looks really, really different from green.

And so it made up magenta.

So, physics-wise, is magenta “real?”

Explaining this thing is a little more than I want to take on on a Saturday morning, but I’ve included a link above that goes into it a little more. The point is that only the colors that actually touch the ‘outline’ of the shape actually correspond to a specific wavelength of light. All of the other colors are blends of multiple wavelengths. So magenta isn’t special.

Given that color is just a fun trick your brain is playing on you to help you find food and avoid danger, is magenta real?

Yeah, absolutely. Or at least, it’s just as real as most of what we see. It’s what we see when we mix up blue and red. It would be disastrous from a survival standpoint to perceive that color as green, so we don’t. Because it’s not green. Light that’s green has a wavelength of around 510 nm. Stuff that’s magenta bounces back light that is both ~400 and ~700. Your brain knows the difference. So it fills in the gap for you, with the best guess it has, same as it does with your blind spot.

Well I’ve been back for a month, and for the past couple weeks hopping between work and school. It’s a lot. But! Free coffee. (I may be slightly over caffeinated at this point)

#unaesthetic, #college, #coffee, #school, #work, #so much paperwork, #the new thing where you can insert alternate text for the pics is really cool!
1 notes · See All
unaesthetic-studyblr·7 months agoText

Already a fantastic start to the semester 🙃🙃

#unaesthetic, #college, #gender studies, #first week of classes, #doing good, #work, #extentions, #she said it was fine and gave me a :), #so i think its ok, #srsly felt sooo bad tho
1 notes · See All
unaesthetic-studyblr·7 months agoAnswer
✨💛 This is the Amazing Person Award! Once you are given this award you are supposed to paste it in the ask of eight different people, who, in your opinion, deserve it. If you break the chain nothing will happen, but it's sweet to know someone thinks you're amazing inside and outside 💛✨

… we’ve been here for a few hours. Friends and finals!

#unaesthetic, #except for my friend shes very aesthetic, #finals, #psychology, #reading, #college, #papers, #so many papers, #im on my last one!, #woot
1 notes · See All
unaesthetic-studyblr·a year agoText

It’s the last day of classes and hiiii we all live here now.

No. Seriously. Simone if snoring on the couch. We. Live. Here. 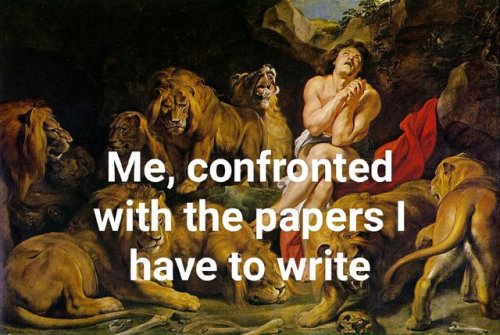 Does anyone else’s study area look like they are camping out? Also random goats.

Go study for your finals. Write that paper and finish that presentation. Study those flash cards. Stop procrastinating, have more trust in you and get off your phone.

It’s that time of year

In the library bc hiiii I live here now!

#unaesthetic, #coffee, #aesthetic, #college, #finals, #finals hell, #or maybe purgatory, #what even, #itd be ok if i didnt still have classes too, #although i have a cappachino chocolate chip muffin, #so ill be fine, #.... i hope, #lol, #captain melodrama, #tis my name, #fuck i dont waaaannttt to, #welcome to my procrastination channel
0 notes · See All
Next Page