Lizzie, rejecting Darcy’s proposal: “And what about Mr. Wickham? What excuse can you give for your behavior towards him? He told me of his misfortunes.”

Lizzie: “That you chose to tell me that you liked me against your better judgment! That you ruined, perhaps forever, the happiness of a most beloved sister! That you -”

Lizzie, about Mr Wickham: “He told me of his misfortunes.”

A single man in possession of a good fortune: “I’m in want of a wife.”

elizabeth: you are the last man in the world whom i could ever be prevailed upon to marry

A single man in possession of a good fortune: “I’m in want of a wife.”

If none of them married, how desperate would the Bennett girls actually have been?

Well the only dowry they have is £50 apiece from their mother’s small inheritance, per year; so that’s a total of £250 generated by Mrs. Bennet’s inherited investments per annum.

The Dashwoods (four women) are living on £500 a year when they are forced to live in Barton Cottage (with good-will making the rent presumably ridiculously low thanks to Sir John Middleton’s good nature, to say nothing of all the dinners and outings he invites the ladies to, which will help them economize on housekeeping costs for heavier meals.)

So there would be six Bennet women left to live on half as much as the Dashwoods are barely scraping by on. £250 is roughly considered enough to keep ONE gentleman at a barely-genteel level of leisure (presuming he does not keep a horse or estate or have any major expenses beyond securing his own lodgings/clothes/meals at a level becoming of a gentleman.)

None of the Bennet girls have been educated well enough for them to be governesses to support themselves, so…yes, their situation would heavily rely on mega-charity from others to just help them survive, much less maintain them in the lifestyle they’ve been accustomed to. The Dashwood women have NO social life beyond the outings provided by Sir John and the offer of Mrs. Jennings to host the older girls in London–otherwise they’d be stuck in their cottage, meeting absolutely no eligible men, creating a cycle of being poor and unmarried and too poor to meet anyone with money they could marry.

If the Bennet girls don’t at least have ONE of them marry well enough to help the rest before their father dies, they are really, truly, deeply fucked.

They may joke about beautiful Jane being the saviour of the family, but…it’s true. Mr. Bennet failed his daughters several times over in A) presuming he’d have a son, B) not saving money independently from his income to support his family after his death when it became clear he wasn’t going to have a son, C) not educating them well enough to enable them to support themselves in even in the disagreeable way of being a governess, D) not making any effort to escort his daughters to London or even local assemblies to help their matrimonial chances because he just doesn’t feel like it, E) throwing up his hands and shrugging when faced with the crises of Mr. Collins and Wickham.

Much as we are relieved on a romantic level that Mr. Bennet’s support of Elizabeth saves her from parental pressure to accept Mr. Collins, Mrs. Bennet is NOT A DICK for pushing for the match, because on a material level it very much means they get to KEEP THEIR HOUSE and gain a connection to the powerful patron Lady Catherine de Bourgh, which could be VERY advantageous for the other unmarried girls.

And the scandal of Wickham very nearly scuppers the chances of ANY of the other girls, and Wickham is a further DRAIN on the family finances, not a man who is going to substantially be able to support them. It is SUCH a disaster, and of course there’s not much Mr. Bennet can do until they are found, but he’s away in London and doing…what, exactly? Mr. Gardiner takes over and manages everything and Mr. Bennet seems happy to just let him.

Mr. Bennet does the ABSOLUTE LEAST, and actively damages his children’s futures by his inaction AND by his one action to support Lizzie’s individual needs being prioritized over the collective gain, which…I mean, Lizzie is going to be JUST as homeless and destitute as her sisters when he dies, so much good being Dad’s Favourite is going to do her. :/

a compilation of my favorite pride & prejudice posts 😌 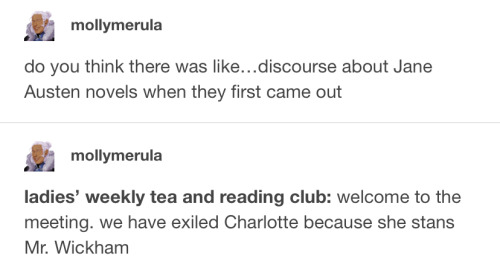 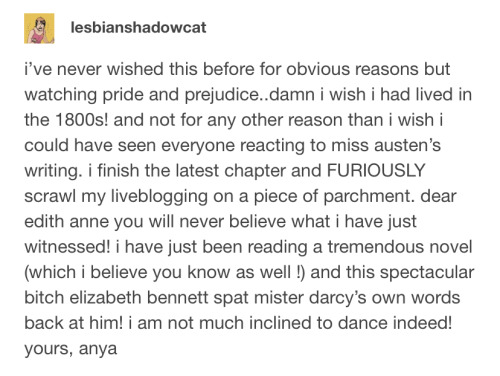 If I was Elizabeth Bennet my entire family abandoning me at the dinner table when Mr. Collins requested a private audience would have been my villain origin story.

Mr Darcy: “I’m not going to another Ball.”

Mr Darcy: “I’m not going to another Ball.”

Mr Darcy: You have insulted me. What more do you want from me?

Lizzie: To have unlimited insult rights.

Mr Darcy: YOU ALREADY DO! WHAT MORE -

LOOK AT THIS PICTURE OF MY EYE 😳🥵

this is the post. this is literally it. nothing else.