wonderoflandsnails
The Wonder of Land Snails
Land snails are amazing but underappreciated. Join me on my snaily adventure as I illustrate some of the most wonderful land snails in the world! (Find me on Etsy as ProtozoaSoup and on instagram as @WonderofLandSnails)
Explore Tagged Posts
Trending Blogs
Statistics
We looked inside some of the posts by wonderoflandsnails and here's what we found interesting.
Inside last 20 posts
Time between posts
90724.55
Number of posts by type
Photo
20
Video
0
Audio
0
Text
0
Chat
0
Answer
0
Link
0
Quote
0
Fun Fact
If you dial 1-866-584-6757, you can leave an audio post for your followers.
wonderoflandsnails · 25 years ago
Photo

This snail is from Hawaii Island. It is the last known large species of tree snail left on the island. 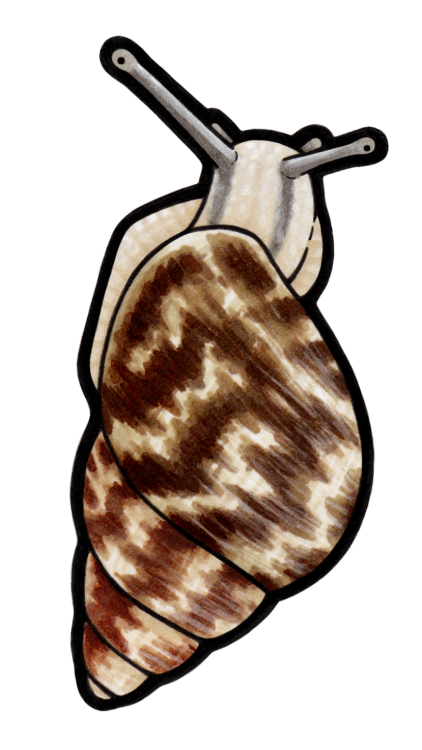 The scientific name for the Lana’i tree snail is Partulina variabilis because this snail can have a large variety of different shell colors and patterns. It is from the Hawaiian island of Lanai and is endangered. 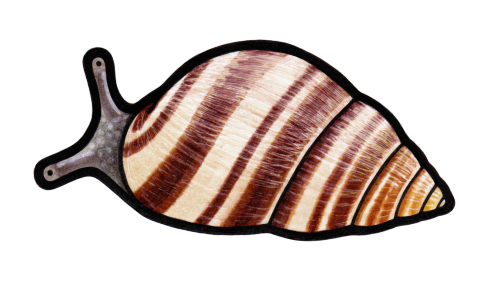 This snail is native to the island of Maui in Hawaii. Its shell closely resembles the branches of the tree that it lives on, which likely offers it some camouflage. Sadly, the Maui tree snail is endangered and the entire wild population is confined to an area of less than seven acres. 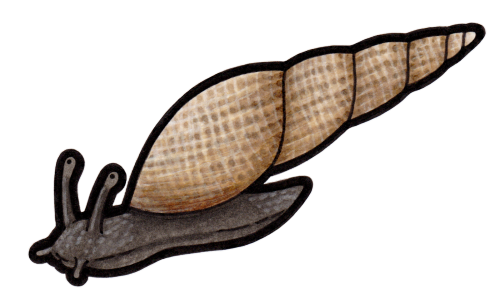 The Ka’ala snail is found only on Mt. Ka’ala, the highest mountain on the Hawaiian island of Oahu. It is a tiny ground snail that lives in the bog habitat at the top of the peak. 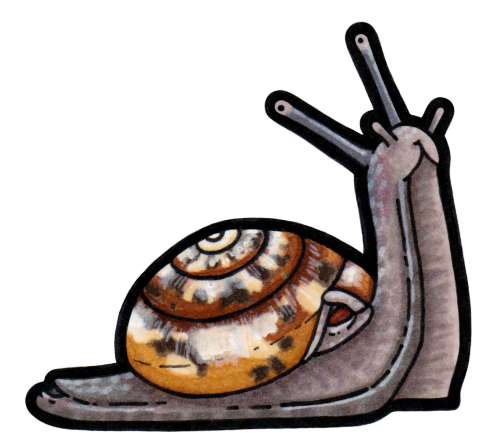 This species of Hawaiian snail is extinct in the wild, but a captive population exists with the goal to increase the population size and prevent complete extinction. It is from the Waianae Mountains on the island of Oahu. 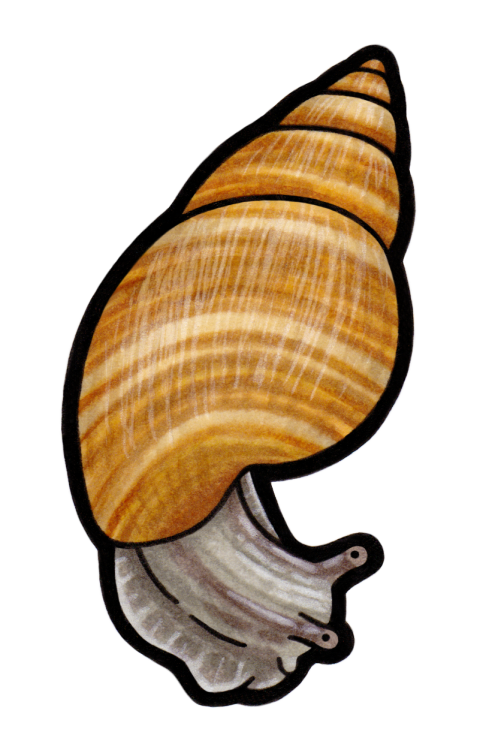 The name “tardigrade” refers to an entire phylum of microscopic eight-legged animals (keep in mind that two other examples of phyla are mollusca and chordata, and chordata contains all animals that have a backbone). Tardigrades are probably most well known for their ability to survive a wide variety of extreme environments. They can survive extreme temperature, pressure, radiation, and desiccation. They can even survive the vacuum of space. They manage to endure these conditions by entering a state of cryptobiosis and becoming a “tun.” In this process, they loose a massive amount of water and and essentially enter a state of suspended animation.

Available as a sticker on Etsy! 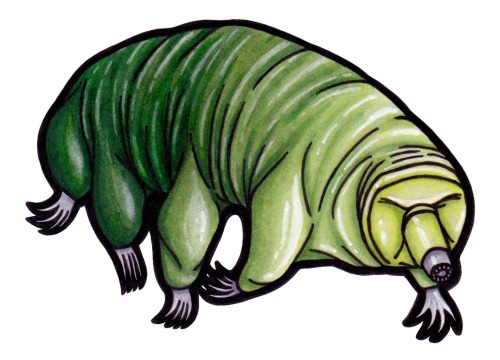 The jumping snail is really interesting because like its common name suggests, this snail has the ability to “jump” thanks to its modified caudal horn (the little spike at the tip of its tail). It can rapidly flick itself around by using its tail and caudal horn to push itself away from whatever surface it’s on.   The jumping snail is native to parts of Japan, but has become established as an invasive species in places like Brazil, Costa Rica, and Hawaii and Florida in the United States. They eat orchid plants and have a lifespan of less than a year. 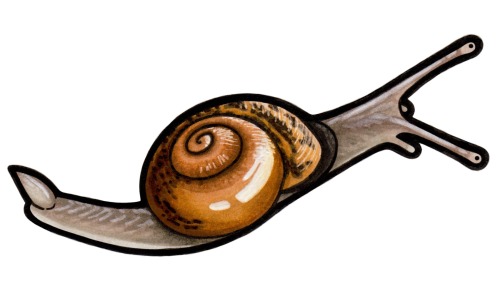 In Hawaii, many ambersnails (family: Succineidae) are refereed to as “snot in a hat snails.” This is because many Hawaiian ambersnails have translucent flesh making them look a bit like snot or phlegm. Their small shells are often not large enough for them to fit their big bodies into, making it look a bit like a small puddle of snot is wearing a little hat. However, some Hawaiian ambersnails are not translucent. Some are an interesting shade of red. The ambersnail in the illustration is one of these red ambersnails.

The Hawaiian name for this snail is hinihini’ula or “red land snail.” 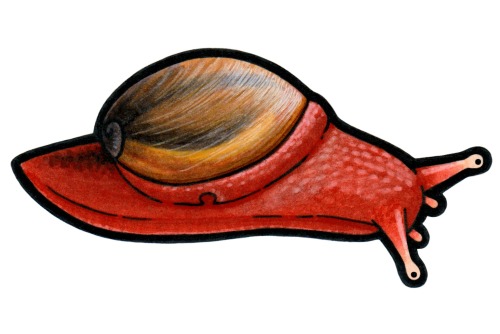 Like other mantleslugs, this slug’s mantle runs the length of its body which gives it a distinctive look. This species is often a light shade of tan or brown with black spots or stripes, however, the subspecies Pallifera costaricensis alticola can be an orange or yellowish color and it possesses exactly three black stripes that run down the length of its body. The Central American mountain mantleslug can be found at high elevations on rotten logs. 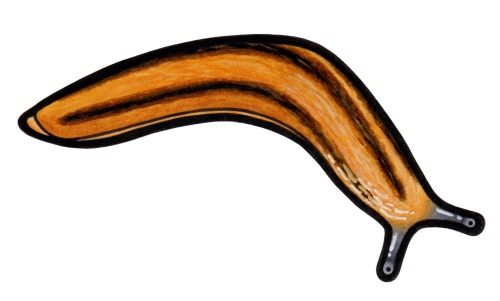 This large snail is originally of European descent but nowadays it is commonly encountered worldwide as a prolific invasive species. Because it is so widespread, it may be one of the most well-known land snails and it is what many people envision when they think about what a snail looks like. This species was referred to as Helix aspersa for a long time, but the consensus now is that this snail should be placed in the genus Cornu, not Helix.

The brown garden snail is commonly used in escargot dishes because these snails are very easy to farm. The snails themselves are omnivorous. They typically consume vegetation, but will readily consume detritus if they come across it. 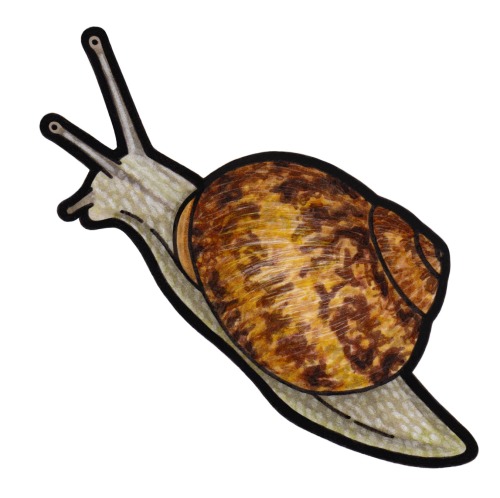 The red triangle slug is a type of leaf-veined slug. This slug in particular is the biggest species of slug in Australia and can reach lengths of nearly six inches. It feeds on algae and mold and produces an extremely sticky slime when threatened. This extra sticky slime can glue predators down for days!

These slugs are also notable for being highly polymorphic, meaning that they can come in many different colors. Some are totally cream-colored, others are cream with a reddish fringe. Still others may be a bright shade of yellow, red, or even dark grey instead of the typical cream color.

The ash-black slug is the largest species of land slug in the world. It lives in Europe and can be identified by the white stripe on the sole of the foot. This slug can have a wide variation of markings and colors, but they will always have the white stripe underneath. They live in forests. 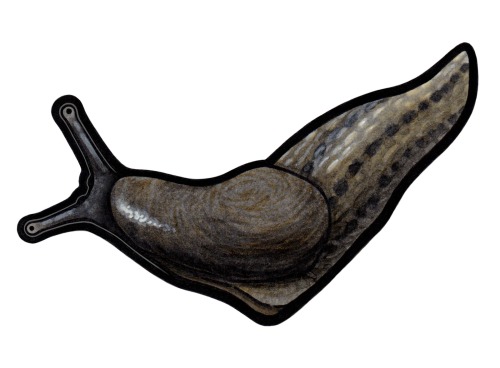 These stunning Cuban snails have brightly-colored shells that almost look like they were painted by someone. Their shells can come in dozens of different patterns and colors, ranging from yellow to orange to red. Sadly, their shells are also the reason why these snails are endangered. Demand for their shells by collectors and jewelry-makers leads to these snails being over-harvested. Cuban painted snails live in trees and eat moss, fungi, and lichen. They live for a little over a year. 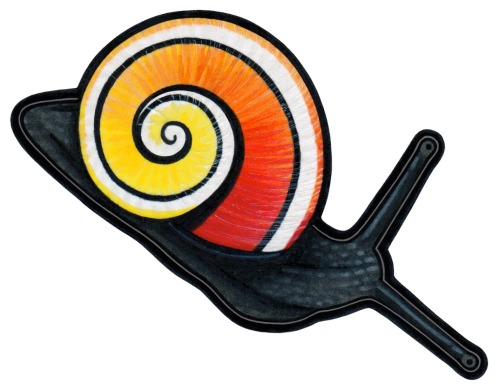 You might be thinking that this snail looks a bit too fat to retract into its shell and you’d be right to think that. The widemouth bulimulus is in fact totally unable to retract into its shell. It’s actually a semislug, not a snail. It is native to the island of Dominica where it eats banana and citrus leaves. It can grow to be around an inch long (2.5 cm). 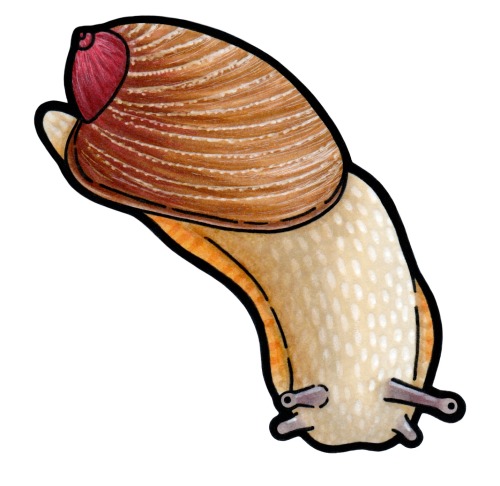 I drew some deep-sea fish!

They’re available as a set of stickers on Etsy! 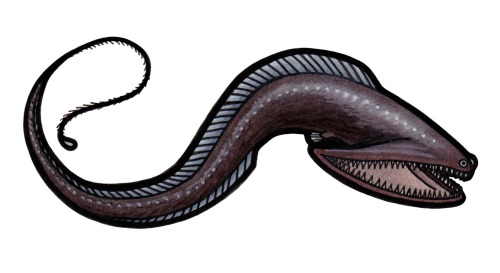 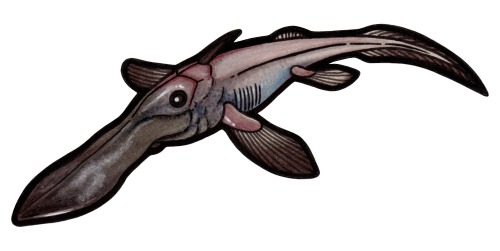 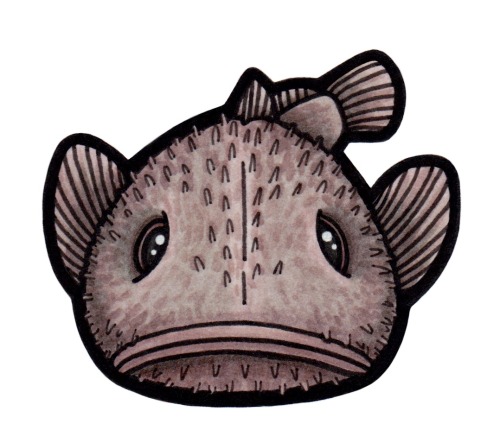 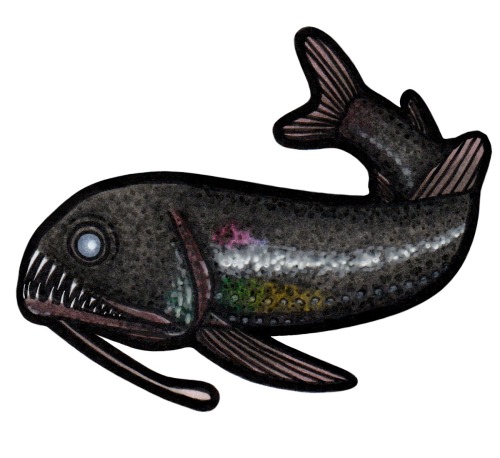 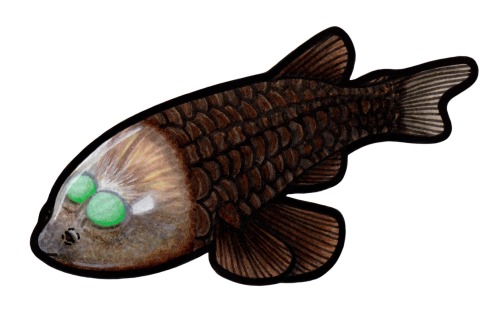 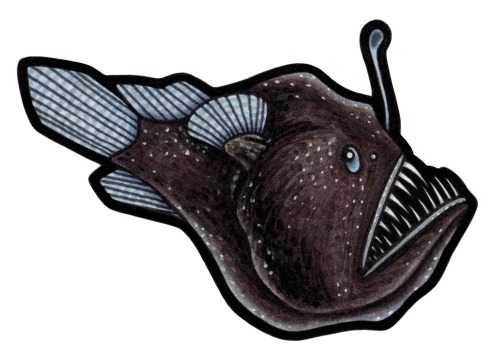 This rare tree snail can be found on the island of Dominica in the Caribbean and has an interesting teal-colored body. The shell can be variable in appearance. Some have stripes while some don’t and some are more yellow while others are more reddish. However, the shell color eventually fades to white once the animal dies. 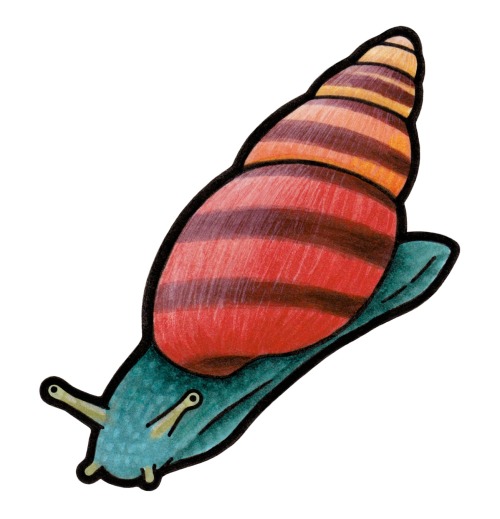 The cellar slug is a European native and sometimes goes by other names such as the beer slug or the yellow slug. It has a distinctive yellow and green mottled pattern on its flesh and blueish eyestalks. These slugs can grow to be quite large and can often reach a length of about four inches (10 cm).

Like many other Hawaiian land snails, Mighel’s tree snail is at risk of going extinct. This beautiful snail lives on the island of Molokaʻi, the fifth largest Hawaiian island and has beautiful yellow, black, and white bands on its shell, giving it the appearance of being painted. Native Hawaiians believed that the tree snails had the ability to sing and that their songs were very special and significant.

Read more about the singing snails of Hawaii here.

The Hawaiian name for this snail is pūpū kani oe which translates to “shell that sounds with a long whistle”, or “singing shell.” 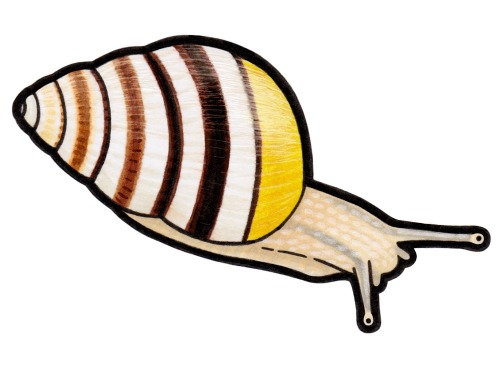 This striking red snail is a prosobranch rather than a pulmonate like many other land snails. This means that despite the fact that this snail is a land snail, it shares many features in common with aquatic snails such as the presence of an operculum and eyes at the base of antennae. This particular species is native to Borneo. 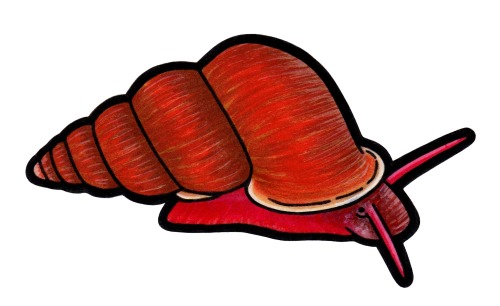