We looked inside some of the posts by somegrumpynerd and here's what we found interesting.

“The higher up you go the colder it gets, everybody knows that. That’s why there’s snow on top of mountains and shit! And a penthouse is the highest floor of a building, so people who live in a penthouse /should/ cuddle, it’s gonna be cold as shit and it’s just-“

Remember that time many years ago when Michael straightened his hair and Gav called out the way he kind of made excuses for it on the RT Podcast?

Yeah. This is the same vibe.

Like “Michael you literally dont need to make excuses for cuddling with your boyfriend, it’s not at all necessary.”

“Oh my god just shut up and go to sleep!”

#AH, #Shippy stuff, #This is so accurate, #And it’s especially funny if you ship the whole crew together, #Michael’s here making excuses why he cuddled with Gavin last night, #To the nine or ten people he’s in a relationship with currently
6 notes · See All
somegrumpynerd·8 hours agoText

One of my favorite hc is that everyone kinda of cuddles after a heist or something, just to make sure everyone is okay and that nobody is hurt

And then there’s the “Does it hurt when I poke you in your open stab wound?” shit.

#AH, #YES!!!!!, #I’m here for found family and I want them all to get hugs, #Criminal cuddle piles is the best trope, #I’m not here I queued this
36 notes · See All
somegrumpynerd·14 hours agoText

[Image Description: a close-up of a light-skinned black trans woman’s face. they have grayish rectangular glasses, which are slightly broken, and sparse facial hair. they are looking slightly away from the camera, with a slightly tired and resigned expression. End Image Description.]

On God bro, we need a new bed

I’m just gonna jump straight into it. I have chronic back pain, and with the current bed frame we have? it’s only getting worse every day. We need a new bed frame with a head board, but given that only one of us has a job rn we need some help, cause bed frames ain’t cheap. the one we’re looking at is about $300. this is real urgent cause i might end up in the hospital if this keeps up. y'all can donate to my venmo (@Alix-March), my cashapp ($VLier), or my partner’s paypal (stemmonade)

#AH, #I love this lets play and these boys, #Gav gets so excited for the babies it’s so pure, #I’m not here I queued this
839 notes · See All
somegrumpynerd·20 hours agoPhoto

Two down, eight to go. 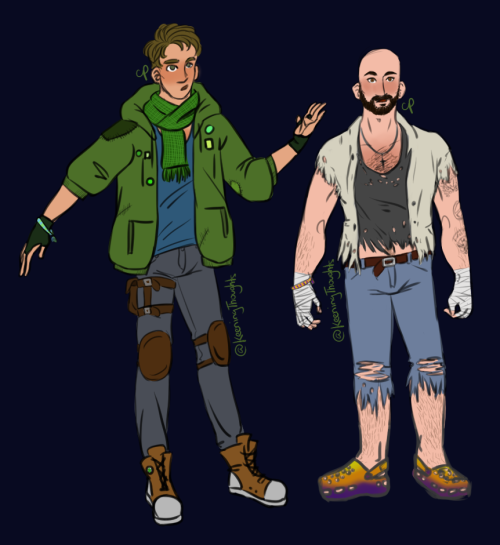 #AH, #MINECRAFT BOYS!!!, #I love Gavin’s big creeper jacket and his knee pads, #He’s gonna need them for all the trouble he makes in this game, #Also how dare you make crocs look cool this is illegal, #I love these boys I can’t wait to see Matt and the others!!
88 notes · See All
somegrumpynerd·a day agoVideo

This series was VERY underrated

#AH, #I can't believe I've never watched this before, #Immediately going on my list 'cause I love Geoff in scary games, #Especially with all his kids around him, #I'm not here I queued this
553 notes · See All
somegrumpynerd·a day agoText

#AH, #Fahc, #Fake AH Crew, #Fahc Jeremy, #I just think he’s neat, #I want these criminals to be in comfy pjs and having a good time
61 notes · See All
somegrumpynerd·a day agoText

Guys, if a car follows you:

DO NOT GO HOME!

If you need to pull over, if possible, take the nearest exit and park somewhere well lit with people around. Gas stations, other 24/7 locations.

Reblog this around. Seems like common sense, but also not something that can happen to everyone.

I was on the I-5 in Washington State. The van was white, with blacked out windows. There was graffiti or something on the right side of the van, but I was too scared to read it.

Someone’s trying to follow me and my mom home, Jesus Christ this is terrifying

Word of advice, if someone tries to flag you down on a highway, pointing to the back of your car, there isn’t anything wrong. They want to kill you. Never stop for them.

They may try to pin you in a lane on the highway. They won’t let you get ahead of them, they will try to prevent you from getting behind them. Fuck traffic laws. Gun it, throw on your brakes, honk your horn and do not stop. get away from them at all costs. Don’t go home, go to the police or go to a fire station. Explain what happened and have them look over ur car.

Everyone please be safe, if you are in the Puyallup or Tacoma area, please be even more careful.

If a cop’s got their lights on and are trying to pull you over, put your hazards on, pull to the right lane, and slowly drive somewhere public. You can use your cell to call 911, confirm it’s really a cop behind you, reassure the operator you’re just pulling over somewhere safe because you don’t trust the shoulder of the highway etc.

A strange man was watching her pump gas at the station and she noticed him driving behind her afterwards.

She experimented to be sure he was following her. She made a random right and then left turn and he kept up.

So, when she got to her homestreet she kept driving and desperately looked for a gas station where she was friendly with the guys there.

A group a black guys she knew in passing worked there.

Well, once she got there, she said she hopped out of the care in a panic and told them what was happening… So at least three of them went out front and yelled “HEY, MAN!” and the guy sped off.

But it’s not over yet. They told my mom to hang out for awhile because the man could still be lurking. Since one of them would be getting off soon and would follow to make sure (the knew his make and model and the plates).

The man WAS waiting a little ways down the road at a grocery store to start following again… Dude honked a cut a fuss and again he sped off.

My mom went to the police station afterwards (the gas station dud vouched for her and gave a description of the guy). So BOTH cars followed my mom home and the station sent a care out to watch her apartment that night.

My mom never saw that guy that was following her again, but she is certain he was determined to do her harm at her apartment.

If you can’t get to one of these, get your ass to a liquor store. Thanks to robbery and drunk folks, people who work at liquor stores know exactly how to put the place on lockdown and the cops will get there damn fast if they’re called.

It’s fucking scary that we even have to share this information around. Reblog to save a life.

This has way too many notes and is a sad commentary on society but continue to share this information. Spread it around!

#AH, #I’m loving this series so much, #I have a couple doodles to post tomorrow or sunday, #It has Matt Bragg!!!!!!
442 notes · See All
somegrumpynerd·2 days agoAnswer

If you have anxiety, depression, adhd, a learning disability, etc. Common "mental health issues", you're neurodiverse/neurodivergent.

Oh I didn’t know! I thought it was just like adhd and autism, I guess I am neurodiverse then thank you!

#Anon, #I got anxiety for sure, #Jury's still out on depression, #What's up lads I'm neurodiverse and ready to party!!, #(But not really I'm so bad at being within sight of humans please don't perceive me), #Anonymous
1 notes · See All
somegrumpynerd·2 days agoText

Peace of mind and bear crimes

(part 1 of Jeremy’s Ghost of Tsushima)

#AH, #I love these two so much, #Jeremy's streams where Kat joins are like free serotonin, #I'm not here I queued this
560 notes · See All
somegrumpynerd·2 days agoAnswer

Here's a head cannon I'm in the process of using for a fic. Its basically everyone being really protective of Fiona because she so much younger than them even though they know damn well she can and will kick their asses. Like Jack and Geoff going full parent mode the second some dumbass makes an inappropriate comment to/about her even though Fiona is already halfway through planning their murder.

#AH, #I love this, #Everybody in the crew gets overprotective it's just their way, #That doesn't mean the person they're protecting isn't about to throw down, #They just have so much backup now, #I'm not here I queued this
67 notes · See All
somegrumpynerd·2 days agoText

For those who don’t know, the Nigerian government have basically waged war on civilians in response to their protest to #EndSARS which is police brutality

Matt in the the most recent Jackbox episode

#AH, #I love him, #We don't deserve Matt Bragg, #I'm not here I queued this
2K notes · See All
somegrumpynerd·3 days agoPhoto

#AH, #I love Gavin's outbursts, #And when the others do an accent to imitate him, #I'm not here I queued this
2K notes · See All
somegrumpynerd·3 days agoAnswer

I know they’re pretty much the same size in clothes but I can’t get over the idea of jeremy wearing michael’s jacket and having sweater paws in it, especially if it’s in retaliation for michael wearing his rimmy clothes (probably complaining about the horrific color scheme but still refusing to give it back)

Like assorted members of the crew will walk in to find the two of them fast asleep on the couch, Jeremy curled up in Michael’s jacket, the tips of his fingers just barely peeking out of the sleeves. Meanwhile Michael is leaned against him in that yellow shirt, Jeremy’s purple jacket on him like a blanket.

Clearly what’s happened is Jeremy fell asleep, Michael came in with Jeremy’s clothes to get a rise out of him, was in fact so endeared by Jeremy napping in his jacket that he decided to nap with him.

Michael staunchly denies this. He says something about “eh, we were drunk, I was trying to show him how terrible his fashion choices are, I swear!” But security cams tell a different story.

“I know the colors are awful, that’s the point, but maybe I’ll try something else for awhile-”

Which Michael immediately shoots down with a nonchalant “Nah, J, they’re awful but they’re a staple, they’re almost iconic at this point.” But the truth is, as much shit as he talks about the assault on everyone’s eyes, he loves the Rimmy Tim look solely because Jeremy loves it so much.

#AH, #Shippy stuff, #Sweater paws Jeremy yeah!!!!!!, #Love that boy need him to be cosy, #Also everybody ripping on the Rimmy Tim colours, #But being adamant he can't change them because they love their rough tough eyesore, #I love this
19 notes · See All
somegrumpynerd·3 days agoText

In which Larry is the funniest fucking person in this video.

#AH, #Larry is a gift I need to watch this soon, #I'm not here I queued this
2K notes · See All
Next Page