We looked inside some of the posts by sweetiitea and here's what we found interesting.

I loved the idea of Shigaraki trying to figure out Tarot cards… and of course, Twice is as curious as ever and thinks they’re pretty neat! 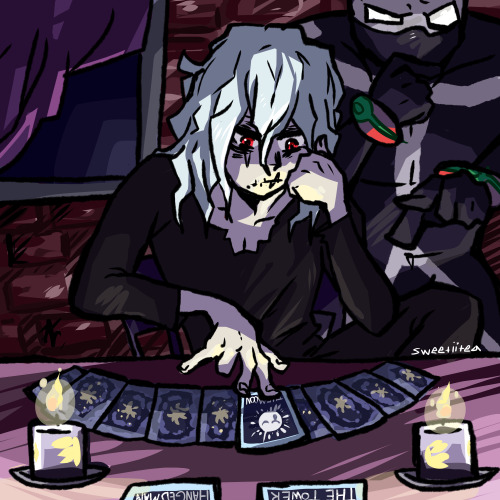 Shigaraki’s hair is a nightmare to draw. Looks like sun bleached seaweed I wanna cry

Someone: omg how do you draw hands??

BBSJDJSISK IM LAUGHING LIKE!!! I don’t even know?? I’m just…. drawing shapes and hoping it looks like a hand. Like I stare at hands a lot and I look at my own hands?? But I literally have no idea how to put an answer that is helpful into words I’m crying djdjekens I feel bad. It’s so hard for me to explain. I’ll think of something

#teatalks
5 notes · See All
sweetiitea·a day agoAnswer
I get a feeling Dabi might be too traumatised to really care for anyone (although I do think he cared for Twice somewhat, but more for his dream). But Holy shit Dabi, apologise to your family! I'm getting a spray bottle.

I feel you anon! Dabi is….. a mess and very complex?? Like, I can’t even give any coherent insight or character analysis about him because on one hand I feel like he does care but then he completely throws me for a loop and so it gets confusing ? And it’s very obvious he doesn’t let people get too close to him on purpose but I feel like this is deeper rooted than just “I don’t care about any of u in the end it’s all about me :))))”

Dabi is losing it Rn and idk to me that just tells me he did feel something?? Like. 😔😔 bro. Twice was your bro… come on. lmao

#teatalks
1 notes · See All
sweetiitea·a day agoAnswer
I read that as "how do you feel about grain" I was like, sure, let's discus bread before it occurred to me that would probably not be a topic someone would ask you about.

ANON THIS IS SO FUNNY! The amount of times I have read “Giran” as “Grain” is embarrassing because I’m also just like…. we getting this bread??? What kind of bread is th- oh wait.

Ayy lets do this! c’: give me some characters fam

Here’s a comic I made of a incorrect quote I did of these two :P

I loved the idea of Shigaraki trying to figure out Tarot cards… and of course, Twice is as curious as ever and thinks they’re pretty neat!

I still have asks in my inbox I plan to answer! I’m just very slow ❤️ I’m not ignoring u, just to let u guys know!

The fact Hawks truly wanted to save Jin from himself so badly absolutely kills me. He genuinely wanted to help him, and a part of me wishes he was able to. He thought he could.

Like, look at how good of friends they could have been. Their interactions prior to the fight were all so wholesome and genuine.

I’ve been talking to my friend @naimitsuno about them, and it makes me so emotional. The last panel, Hawks’ face… he truly believed Jin was a good person and that he could save him.

And when he tried, Jin was just so devestated and broken, and betrayed and angry at himself that he was lost to reason. The League is his home, and being torn away from them is such a terrifying thought. Living a life without them, it’s not something he wants to imagine. And they were there for him and accepted him when no one else would. He centered his entire being around them — his purpose to live was to make them happy and help them reach their goals.

And it breaks my heart. Jin is just a beautifully written tragic character. And his ending was bittersweet.

But Hawks, he’s just like him in that sense. Tragic, and able to empathize. I wonder if he mourns what happened. Knowing he couldn’t save Twice. Knowing he was the one who killed him in the end. Because was forced to.

#teatalks, #hawks, #twice, #bnha, #im making myself cry, #i keep thinking about my friend and i’s conversation snd im just aaaaa, #bnha spoilers
107 notes · See All
sweetiitea·2 days agoAnswer
Sorry if u answered this already! But , what’s your view on Dabi during the Twice and Hawks fight? Official translations are out and he seems to be speaking about Twice and how “sad” he is in a sarcastic manner and it’s got me feeling kind of sad.

I think that Dabi can be a pretty contradictory character. Obviously, Dabi (and Hori) is playing his cards close, both about Dabi’s feelings and his identity. Dabi often says one thing and then does another: he sarcastically says he can’t fight Hawks and Endeavor, and then he tries it anyway; he complains about helping retrieve Giran, but when he sees Shigaraki in action he decides to go “all out,” even when he’s pushed to the point of taking damage from his own quirk; his clone tells the Twice clone to “get off him” at Deika tower, but in 266 the real Dabi initiates contact with Twice through that high-five—and, honestly, it’s a friendly gesture.

One thing I think is very clear, however, is that we’ve never seen Dabi like this before. He wasn’t this fucked up fighting against Eraser, Snatch, or even Geten. The closest we see to his behavior right now—smiling, talking bullshit—is when he went up against Endeavor. Endeavor, presumably the man who hurt him and turned him away from heroes—and now Dabi’s facing Hawks in 267 and going even further, acting even more frenzied than he was in Fukuoka, after Hawks himself proved that he was no true hero. Dabi’s not acting like this is any other day. Clearly this fight is different.

We rarely get Dabi’s POV, so it’s hard to say what’s going through his mind, and there’s typically an element of plausible deniability to his actions: did he want to save Twice because Twice was useful, or did he really care about Twice as an ally? There’s not a definitive answer to that, but I think there are a couple lines that point us toward the answer—because we do get Dabi’s thoughts in these chapters:

The two lines of internal dialogue we get from Dabi are thoughts about Jin. What’s more, Dabi shows, frankly, a profound understanding of Jin’s inner life: his thoughts precede Jin’s own thoughts about not being “unlucky.”

Here, Dabi clearly has what Hawks lacks. As @waxwingedhawks has pointed out, Hawks doesn’t understand the League or their relationship, but Dabi understands Jin. These few chapters have been a push-pull between understanding and lack of understanding, with Hawks pretty much being proven wrong or denied at every point—and Hawks is still trying it with Dabi.

He asks if Dabi’s expression is the “face of a man who just watched a friend die”—in asking that, he reveals that he’s trying to mold Dabi’s reaction into one that he can understand; he wants Dabi’s feelings to be easy, prepackaged, and handed to him, just like he stripped Jin of his complexity and put him into this mould of a “good person (who would surely take Hawks’ offer).” Dabi’s not having that though—he one-ups Hawks with a line about how he hasn’t cried since his tear ducts burned, exposing that Hawks doesn’t actually know anything, especially not about how the League has suffered, which is more than Hawks even imagined.

So we get to Dabi’s “so sad” and “I never gave a crap about them” lines. They’re unsatisfying to us as readers, because we—perhaps as much as Hawks—want clarity. We want to know how Dabi feels about the League for that sweet found family payoff. Dabi, however, is not confronting us, he’s confronting Hawks; he’s never been completely honest with Hawks unless it’s convenient for him, and why would he start now? He has nothing to prove to Hawks, who’s trying his damndest to mould both Dabi and his ally into an easily-comprehensible soundbyte. As @waxwingedhawks has said “Dabi does not owe Hawks his grief and vulnerability.”

The one thing that Hawks probably does right these few chapters is stopping with the assumptions and asking Dabi who he is. Through that, Hawks learns Dabi’s true identity, but the readers are the only ones who got to access Dabi’s thoughts, which he can’t mask or lie about. Even if the rest of this isn’t convincing, return to Dabi’s thoughts in 264 and 266, because they’re some of his only lines that cannot have an ulterior motive. Dabi can bullshit what he says, but it’s not so easy to bullshit what he thinks and does.

Really been wanting to draw, but I’ve been writing on my rp blogs instead… I’m so low energy and depressed /cries/ I just wanna draw my mans and catch up on shiggy week…

#teatalks, #i feel so left behind, #i know i can draw stuff late but!!!!!, #cries, #negative
3 notes · See All
sweetiitea·3 days agoPhoto

Don’t worry. There are plenty of others like you.

i don’t think Mr. Compress smokes, but if he did he’d use one of these long and fancy cigarette holders 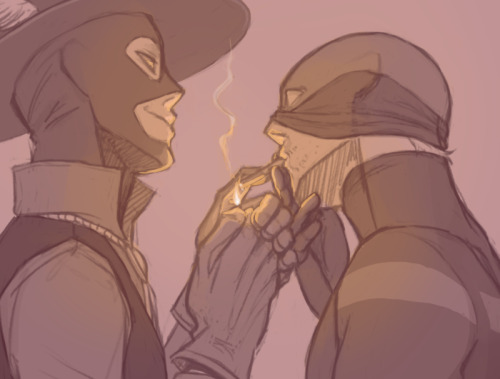 This is what happens when I just wanna doodle something simple and I start putting more detail in it than intended. 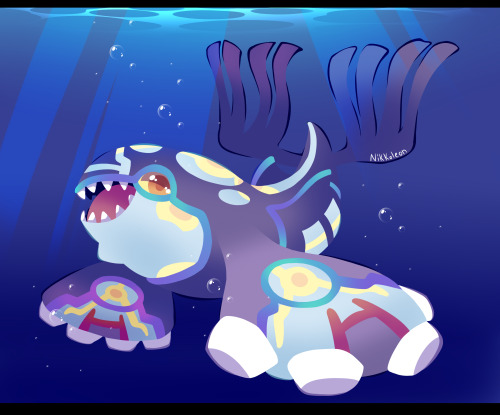 #this is so pretty!!, #pokemon
38 notes · See All
sweetiitea·3 days agoText

Thinking of the song Gar.net sings in St.even Un.iverse “Stronger than you” and crying about how much it sounds like Twice and now I wanna make a version for him cuz I don’t think I’ve seen one yet

Every time I get sad, I’m going to remind myself that Jin is just chilling in Animal Crossing.

“Is there a life better than this one?”

*Reincarnates as an animal crossing character*

#bnha, #twice
971 notes · See All
sweetiitea·3 days agoAnswer
on the topic of opinions, how do you feel about giran?

Honestly, I love Giran. I think he can easily sympathize with people, but I’m sure he has to separate these feelings and his clients because.. business, you know? But while also keeping a good rep. We see his interactions with Twice, and how he helped him find the League, checked up on him, etc.

I think he’s a cool dude and the poor guy’s life has just been going downhill since he’s been associated with the League of Villains 😂 he needs a break. All in all, I really hope we get to see more of him… especially after recent events.