We looked inside some of the posts by moobiesrcool and here's what we found interesting.

That girl is so rude! Mr. Alabama should run the other way.

Isn’t that a conflict of interest?

And… The experiment is already a failure, putting in a random person wouldn’t fix it.

Is this show too over the top stupid to be funny?

The cowards turned the comments off so let’s comment here.

I feel like 90% of nude and sex scenes in film are completely unnecessary and as much as the actors that participate in them want to believe that it drives the story forward, it really doesn’t. The story will still move forward perfectly fine if the movie just eluded to sex/nudity. If you don’t want your sex scenes to be reduced to adult website, don’t make them. They’re not necessary anyway.

And if you REALLY want to see ass and titties there are websites specifically for that.

Started watching Demolition Man and the 90s view of 2036 is creepily relatable to the current coronavirus situation. Soon we’ll be doing their weird “air five-circle-circle” thing instead of shaking hands.

It’s on Hulu right now if y'all want to watch.

It’s a different cast of characters, or the children/grandchildren of the original cast ya know… like a curse.

#stephen kings it, #it 2017, #it chapter two, #it chapter 2, #it 2019, #It, #stephen king
6 notes · See All
moobiesrcool·19 days agoAnswer
Do they have ever have an explanation for the sons American Indian obsession in parasite? I’m confused about what it represents

https://zora.medium.com/how-the-movie-parasite-confronts-native-stereotypes-f89ec8399b8c this is a good article on it by a native woman

I don’t think anyone rich is inherently evil. Some actually built their wealth from the ground up/work hard and I think they deserve to enjoy the benefits of that. However, people at the bottom also deserve a livable wage and I think you can be rich and advocate for the poor man. I don’t know the political stance of any of the above celebrities but you can be rich, enjoy the movie, like the movie’s message, and politically say “yeah, tax me more for free healthcare man! Give people a living wage!” 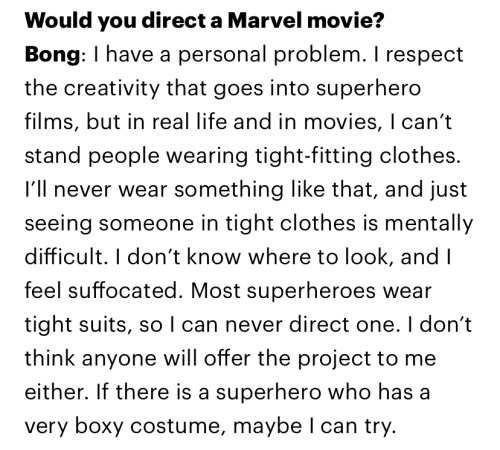 I’m coming back here because not only did bong joon ho end the oscars but he also won best picture, best screenplay, best international film and best director after ending it.

HE DID? THAT. Goodnight.

How did he end the Oscars? I’m confused? Did anyone anywhere ever think of the Oscars as a international film festival? I thought it was obvious that it was local.

Don’t forget her and whoever her boyfriend is got caught in a gym that was supposed to be closed under lockdown orders.

Dubbing is hella awkward. The voices often don’t match the actors and even if you have no clue who they are you can tell. And it can seen extra obvious if the recording quality is bad. I prefer to hear the emotion in the actors voice even if it’s in a different language. Tom Hiddleston’s epic response to the first draft of The Avengers:

’Tom Hiddleston was so incredibly moved by the first draft of the [Avengers] script he saw that he shot off an e-mail to Joss as soon as he was able to process the storyline he’d been given:

I am so excited I can hardly speak.

The first time I read it I grabbed at it like Charlie Bucket snatching for a golden ticket somewhere behind the chocolate in the wrapper of a Wonka Bar. I didn’t know where to start. Like a classic actor I jumped in looking for LOKI on every page, jumping back and forth, reading words in no particular order, utterances imprinting themselves like flash-cuts of newspaper headlines in my mind: “real menace”; “field of obeisance”; “discontented, nothing is enough”; “his smile is nothing but a glimpse of his skull”; “Puny god” …

… Thank you for writing me my Hans Gruber. But a Hans Gruber with super-magic powers. As played by James Mason … It’s high operatic villainy alongside detached throwaway tongue-in-cheek; plus the “real menace” and his closely guarded suitcase of pain. It’s grand and epic and majestic and poetic and lyrical and wicked and rich and badass and might possibly be the most gloriously fun part I’ve ever stared down the barrel of playing. It is just so juicy.

I love how throughout you continue to put Loki on some kind of pedestal of regal magnificence and then consistently tear him down. He gets battered, punched, blasted, side-swiped, roared at, sent tumbling on his back, and every time he gets back up smiling, wickedly, never for a second losing his eloquence, style, wit, self-aggrandisement or grandeur, and you never send him up or deny him his real intelligence…. That he loves to make an entrance; that he has a taste for the grand gesture, the big speech, the spectacle. I might be biased, but I do feel as though you have written me the coolest part.

Tom, this is one of those emails you keep forever. Thanks so much. It’s more articulate (and possibly longer) than the script. I couldn’t be more pleased at your reaction, but I’ll also tell you I’m still working on it…. Thank you again. I’m so glad you’re pleased. Absurd fun to ensue.

My mom has NEVER apologized for yelling at me.

It feels like there’s only 20 people living in that area.

I’m a C cup and I’m pretty sure Ben has bigger boobs then I do.

Even though it’s questionable for many reasons I’m still happy about it.

I was actually wondering who was going to end up questionably banging him and why neither had tried.

Things are looking out for Judy with that woman

And then the ex she is living with is the cop lady.

WHAT THE FUCKING FUCK! I HATE THIS FUCKING SHOW!

Sorry I have a hard time keeping up with names. I don’t even know Christina Applegate’s lady’s name.