ncssian
nesta stan
only here until acosf comes out (she/her)
Explore Tagged Posts
Trending Blogs
Statistics
We looked inside some of the posts by ncssian and here's what we found interesting.
Inside last 20 posts
Time between posts
26613.75
Number of posts by type
Photo
2
Video
0
Audio
0
Text
14
Chat
0
Answer
4
Link
0
Quote
0
Fun Fact
If you dial 1-866-584-6757, you can leave an audio post for your followers.
ncssian · 3 days ago
Text

Me as a writer: Gotta add a little bit of fluff, a handful of laughter and sarcasm, and just a dash of angst.

@theadamantdaughter @honxrable I swear this is what you do to us

nessian, multi-chapter fic, nsfw, tw: mentions of sexual assault, thoughts of suicide, alcoholism, let me know if I missed any!

It wasn’t that she was particularly happy living in her endless rotation of drunken nights and bad fucks, but she wasn’t suicidal either. She wasn’t contemplating turning that horrible power on herself, and that was as much as she could ask for.

But now she’s stuck in the Illyrian mountains with no one but Cassian for company. No alcohol to ease her nerves, no fae males to keep her company, and without her vices Nesta is drowning.

I read your “A Favor” fic today and omg it was amazing. I’m not usually one for modern AUs but this was so well done. Can’t wait for the next chapter!

Me: *comments on every chapter of a favor on ao3 but is too scared to interact with you on tumblr*

hellooo im kind of writing smth totally different than ive ever done before during my free time, and it’s currently the most fun thing ever, so im dropping a snippet in case i never decide to post the whole thing:

Nesta strokes a soft hand across Rhysand’s jaw, leaning in conspiratorially. “I killed Tomas,” she whispers. “And his rapist pig of a father. And then I killed Mr. Bloomsbury, and Mr. Mansfield, and the Yates brothers. Their blood tasted filthy, dirtied by their sin. But it wasn’t the taste I relished. It was the act of it, the beauty of a monster draining the life from another monster.”

a moment of prayer for my gpa when acosf comes out

will i ever get over being robbed of nesta/lucien brotp? no because nothing hurts worse than my two fave outcast characters not getting along

So… I painted Declan Emmet from Crescent City by @sjmaas usually its very bad idea to draw a character with no description and honestly I have no idea how Declan looked in the book but I still decided to go for it and drew him. All I remember is that he was redhead and had amber eyes. Fingers crossed he somewhat looks like this and I wasn’t too far from the OG version. 🤞🤞😂 Hope you guys will like it xoxo 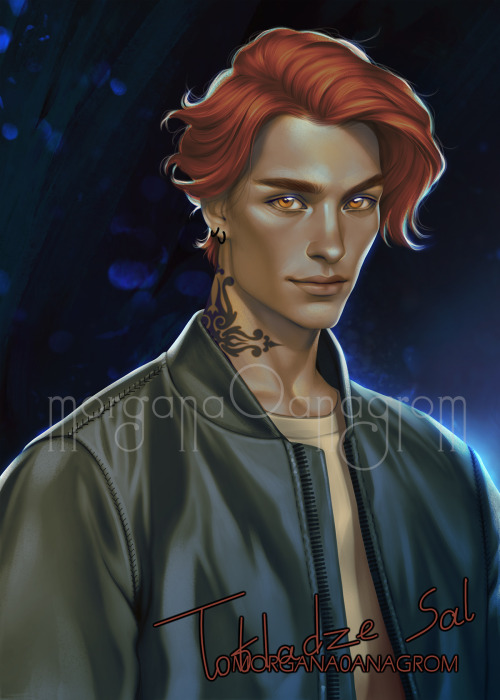 on one hand it’s unfair that nesta’s past actions dont get to be sugarcoated while rhys’s do, BUT on the other hand it’s so much better storytelling?? yes there’s a bias there but nevertheless im proud that nesta is the character that forced sjm to grow up and write tough, realistic stories where redemption and happy endings are well done and hard-earned.

Hi there!! I just found out about your fic a favor and it is so lovely, your writing is amazing!!! Do you have a fix day for update? Also I don't know if anyone ask you before but what are your thoughts about nessian in the next book? Do you think that there is a chance of them not ending up together?

hi and thank you so much! i do not have a set schedule for updates unfortunately, and my writing depends entirely on how much energy i have on a given day (this week i am… very overworked lmao). i usually don’t take longer than 2 weeks to update though.

the closer we get to acosf, the more i want to make my version of nessian as close to canon nessian as possible (meaning no, cassian will not start hating feyre or his friends— but there will be Discussions). i’m honestly ready for nessian to be the most intense ship sjm has ever written; they have so much shit to work through and all their problems just add to the flavor it all. ive always believed that rough times now only lead to high payoff later, esp in any form of storytelling.

ive also never once doubted that nessian would end up together. i know ppl like to theorize and overworry and it cant be stopped, but ive never been a “what if they die/don’t get together” sort of person without strong reasoning. sjm has mostly predictable writing patterns and nessian has been in the works since 2016. the real tossup is elain’s love interest, but even im 99.9% certain about that one. anyway, nessian as a ship are my babies no doubt about it.

ok but nesta getting a motto from the same woman who brought us “i am aelin galathynius and i am not afraid”…. literally shaking

Hello everyone! Below you will find a continuously updated list of things Sarah say’s in her live on January 15th about ACOSF and Nessian. I will be updating this post as the live goes on, so in case any of you missed anything, you will be able to come back and see it here.

Disclaimers: I cannot guarantee that I will catch every single thing Sarah says, but I will try my absolute best. I am only writing about ACOSF, not Crescent City. This list will be non-biased. I am just trying to gather information here; the analysis will come later.

- Sarah showed the book, its got a glossy finish and is super big *photos to come, I took screenshots, they’ll be at the end of this post*

- Sarah says that she can confirm and deny that Eris is in the book. He is her favorite Autumn court character. She says she “loves bad characters who act bad but have a secret history and secret motivations.” She likes writing about people who are mean to the IC and the other main characters, and doesn’t see them as saviors. Eris “chops” them down.

- Expect a good amount of Azriel content. It’s hard to talk about him without spoiling. He’s in the book more than Eris. Him and Cassian have a close bond, and Azriel has a lot of his own shit going on that we’ll get some hints off. There’s a song by the Killer’s that reminds them of him.

- The relationship between Nesta and Azriel is not a massive arc, but over the course of the book they recognize a lot of the same things within each other. Nesta see’s through Azriel’s secrets. Azriel treats her like a normal person, which she doesn’t get a lot. They have mutual respect and understanding for each other, but it’s not a deep friendship like Cassian and Feyre. They both tease Cassian.

- Bread-crumb hints will be scattered in Azriel’s extra excerpt.

- ACOSF is steamier than Crescent City 2, “in terms of bodily fluids.” (CC2 is still being edited though)

- We will find out what was in the box Cassian throws into the river. It is something he spent a lot of time thinking about, and tracking down, and a gift he knows she would have loved. It was something very precious. It’s not a siphon.

- Sarah said “maybe,” to a question about whether or not we get to see Feyre pregnant in ACOSF.

- The King of Hybern was inspired by Sarah’s disgust and horror at the rise of Trump.

- We will see some High Lords in ACOSF. Helion will make an appearance. Sarah loves him.

- We will see what Lucien is up to. He makes a couple of appearances.

- We will be proud of Nesta’s growth. Her journey meant a lot to Sarah, more than any other character she’s written. She starts off the book in a dark, broken, jagged place. She is hurting and hurting other people. She’s a hot mess, and beyond imploded by that point. Her journey from that place to the person that she becomes by the end is massive. Sarah didn’t sugarcoat things. Things are told the way they happened.

- Nesta earns her ending. She had to fight every step of the way. She get’s her happily-ever after, even though she will occasionally suffer greatly.

- So much of Nesta’s journey is tangled up in the past. We will revisit those past events from Nesta’s perspective. We’re going to see her emotions and how she felt in those past moments. Past events will be explained. SJM will not make her a “nice-sweet” person, she wants her to be hard-edged. She is not going to sweep her mistakes under the carpet. Nesta knows everything she’s done wrong, she’s not oblivious to it.

- Sarah will confirm and deny that Rhys has a last name.

- There’s a birthday book that Sarah got that has a quote in it that is Nesta’s motto, as well as Sarah’s. Link to the book: https://birthdate.co/products/the-birthdate-book?variant=32794474807399¤cy=USD&utm_medium=product_sync&utm_source=google&utm_content=sag_organic&utm_campaign=sag_organic&gclid=CjwKCAiAl4WABhAJEiwATUnEF6sedl8NL8USeR7JyHUXkVGFC6vqenbDDCaPNsZAM62242Bfj4C_9BoCyYAQAvD_BwE

But what If I fall and ruin my face? You’ll trip! I’m bad at tying shoelaces. Just tie them, will you? I don’t know how. You can’t tie them? No.

Your Taylor Swift drabbles are my comfort fics ❤️

omg thank you so much?? i loved writing them i hope i can continue them one day