@donnynovas asked:  this is life  or  ten minutes ago?

in the arms of my love, i’m flying over mountain and meadow and glen; and i like it so well that for all i can tell, i may never come down again.

haven’t drawn these three in a long while. musical erik, raoul, and blonde christine because i felt like it. so not used to colouring blonde hair that in frustration i eyedropped the colour from @geickogarbage ‘s art oops 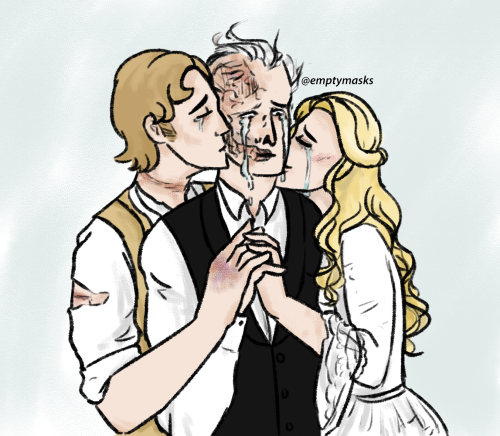 aw sweetheart, thank you. always sending love your way too Neopronouns are not a “tumblr fad”. Gender neutral pronouns other than they/them have existed in the English language for actual centuries. They are not harmful to the trans community.

To those who are against neopronouns, you’re acting against the evolution of a language and acting against something that’s been around for far longer than you’ve been alive.

To those who use neopronouns, your pronouns are not harmful. You do not deserve to be made to feel ashamed for your pronouns.

Op you can’t just drop this and expect us to not ask what the old school gender neutral pronouns were!!! How on earth are all my nb friends gonna pick the dapper pronouns????

•In 1789, William Marshall confirmed the use of both“a” and “ou” as a replacement for he/she/they and even i.

Sources for these as well as many others that I didn’t add due to the list getting too long can be found here.

An interesting note is that in the modern language a lot more people use neopronouns then you would expect!

•Yo is a majorly African American pronoun coined in 2004 and used by Middle School students In Baltimore, Maryland.

Plus a vast variety of newly coined pronouns that you will have seen commonly floating around!

Neopronouns have existed and been recorded for a long time, they are not a new concept, nor are they mogai or a tumblr concept. They are not modern, there have just been many modern adaptions to already existing pronouns.

Singular they is older than singular you!

Reblogging this to anyone who is against neopronouns. I’ve heard takes that they’re harmful to the trans community because they somehow make community look like a laughing stock because I guess transphobes won’t take them seriously but newsflash when have transphobes ever taken non-binary people seriously. Or the argument that it is only teenagers who use them who are ‘going through a phase’ because I know multiple adults who use ze or xe pronouns.

Also interesting that I’ve seen this take from trans people, but never non-binary people. Because I wonder if it’s something some transmen and transwomen can even understand. To be against neo-pronouns is to be against non-binary and genderqueer people, in my opinion. Because there are so many people who are on the non-binary side of the gender spectrum who do not feel that they/them fits them.

I am sorry if you or someone you know has been hurt by someone making fun or you for using neo-pronouns or not understanding and either verbally or physically attacking you. But if someone attacked you for that, it sort of feels like they would have attacked you regardless of the pronouns you used or they thought you were using. If someone is going to attack someone for the pronouns they use, then they would probably attack you regardless of those pronouns and purely because you are trans or non-binary.

Stop making non-binary people out to be the reason why trans people get attacked.

So Apollo didn’t make it into the Hades game so I went and designed him myself. And someone else. I’ll post the drawings of their art/sprites separately and the concept art if people are interested. I really want to keep making these fake screenshots and tell their story through them. I also have more characters I want to draw in the games style. Which is what I tried with these. This isn’t my normal drawing style, but I tried to replicate the game’s style, which let me tell you I’m not used to block colouring so that was hard to get used to at first.

But yeah, I love them, I want to draw them more, let me know if you’d be interested in seeing more. 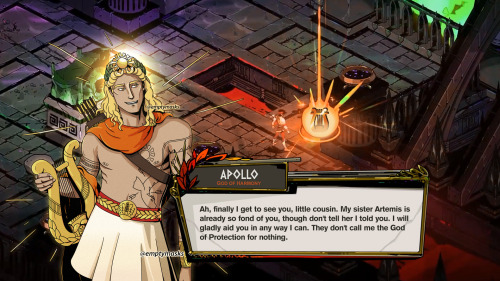 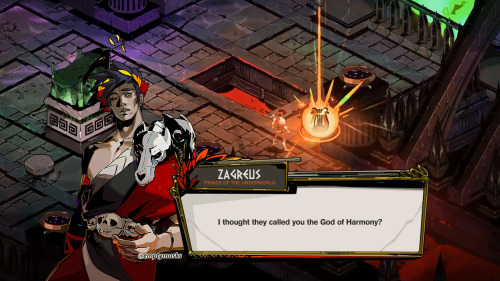 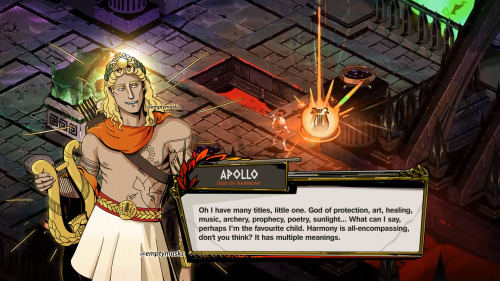 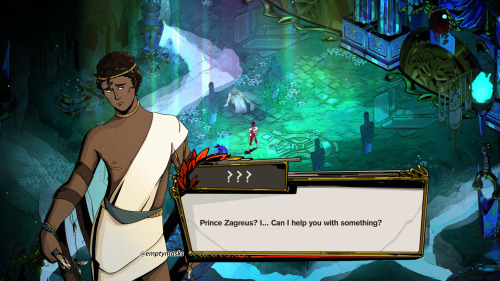 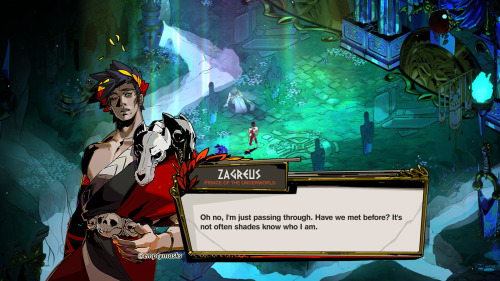 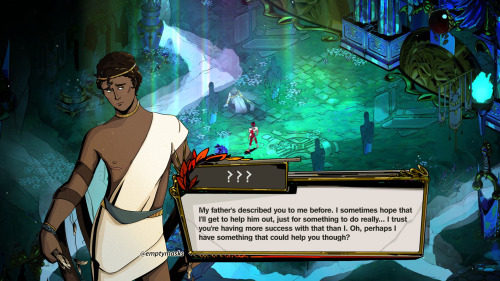 You’ll kill him, Artemis says one afternoon and her voice sounds worried and sad, almost as if she wears the grave of the world on her shoulders.

You don’t see it yet, you never do, but your shoes are filling with his blood and the weight slows you down because this boy is everything that is not right with you, desperate hands grab at the hem of his leather jacket, pull him back, turn him around, worried big eyes so unlike like his own with fear around the edges, sharp and - He patches you up in places no one should be allowed to touch. Can’t you see? A strangled shout - Apollo are you even listening?

I am, he says, hollow like the echo of an old record, played too often.

But I am already his, he doesn’t say but instead thinks of sun kissed backs and the marks on greedy bones.

Fall of the Sun

“Amid Elysium’s moss-covered chambers, carved of stone, stand untold numbers of eternal monuments in tribute to the greatest heroes which mortality can offer, there to honor them in life as well death.”

♪ Good riddance to all the thieves, to all the fools that stifled me ♪

for my @officialtolkiensecretsanta - a reimagining of Edmund Leighton’s classic chivalric painting, god speed. 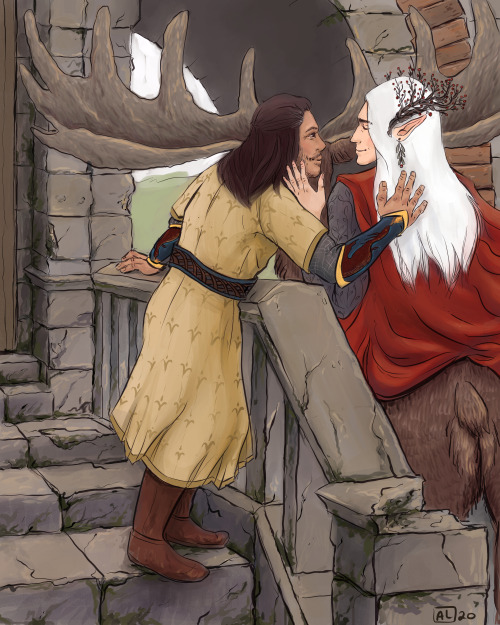 A Phantom Among Us

Christine finally takes off her helmet! A couple hours late I know. Life has been a little hard to handle but I’ve been feeling better the last day or so. Not going to let you guys down by missing a week. I also just made a Tiktok account the other day to post drawing processes and cosplay and other things on if anyone wants to follow me there @​ emptymasks.

Updates every Friday at 11pm GMT on Tumblr and Instgram and at 5pm GMT on Webtoon and Tapas. Please help support the comic on here and on other sites! I’m @emptymasks​ everywhere else and you can find the comic either under ‘A Phantom Among Us’ or #aphantomamongus and #potoamongus 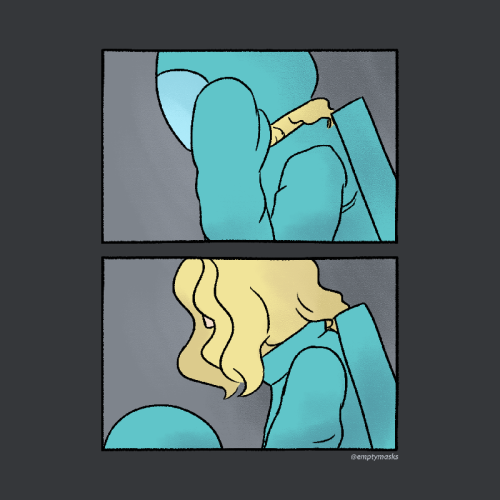 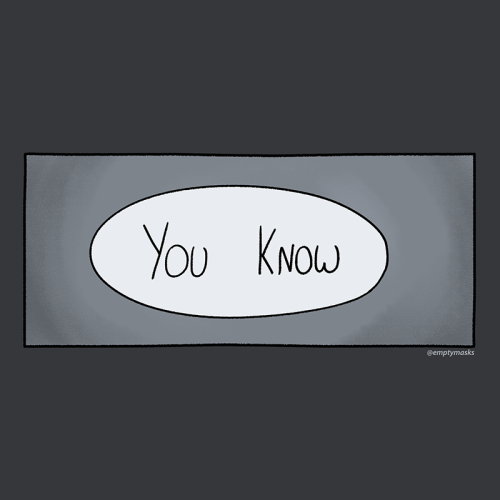 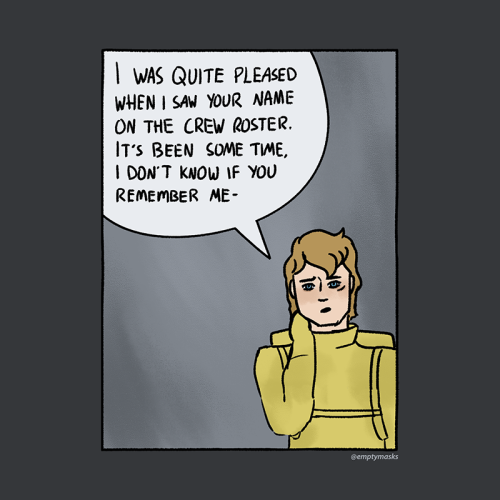 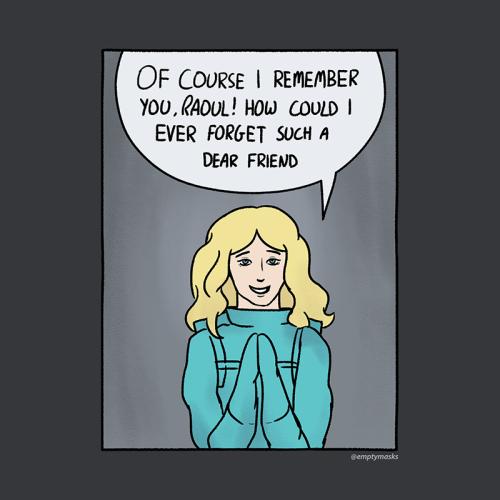 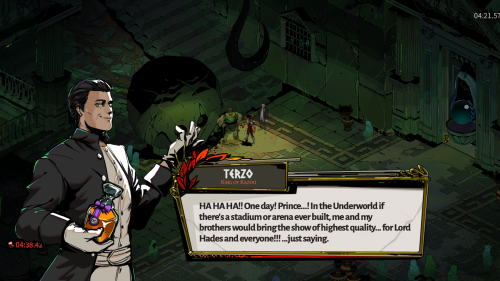 #uh oh feelings again#les mis#enjolras#grantaire#fuck wait what do i tag the ship with#well i guess the grantiare tag is probably all enjoltaire anyway#i used to do the awkward ship name:quote format but then i never remembered the quotes i used so...#queue
12K notes
emptymasks · a year ago
Photo

more from this concert