daisies blossom over a body nestled between blades of grass; eyes bloom open, and arms stretch to the sky． a hand reaches out to capture the sun． she is beautiful, so so lovely indeed.

We looked inside some of the posts by oguile and here's what we found interesting.

but the squirrels aren’t awake yet

and the food is all gone…’

; what a quaint little thing, it thought.

how i’d love to defile her, it whispered. ;

You crawled through the window like a slithery snake…! ’

Curiosity may kill the cat, but satisfaction will always be there to bring them back.

’ That was cool! …Where did you come from? 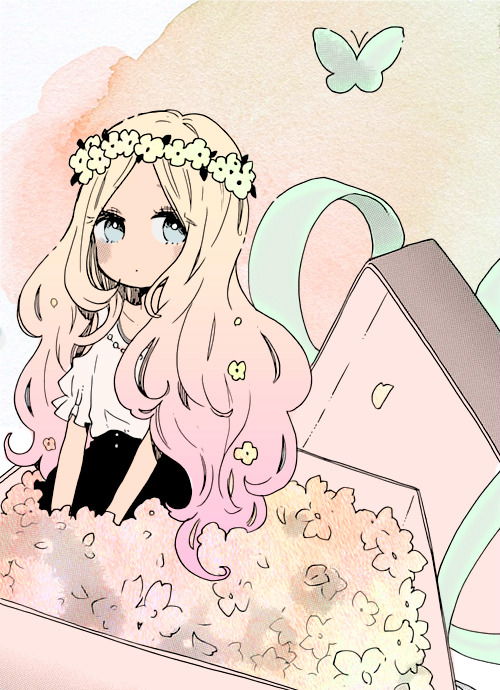 ♫ I hear a bird chirping, up in the sky
I’d like to be free like that spread my wings so high

I see the river flowing water running by
I’d like to be that river, see what I might find

I feel the wind a blowin’, slowly changing time
I’d like to be those flowers, open to everything

I feel the seasons change, the leaves, the snow and sun
I’d like to be those seasons, made up and undone

I taste the living earth, the seeds that grow within
I’d like to be that earth, a home where life begins

I see the moon a risin’, reaching into night
I’d like to be that moon, a knowing glowing light

’ you are in the cosmopolitan hotel.
how did someone like you end up in vegas? ‘

…Perhaps my venturing led me too far?

But! To arrive at such a specific place is a feat in itself!

Please tell me, did you…see me walk in?

H-Have we…met once before, by any chance? ’

suddenly she felt the urge to try to help her. maybe she was sick ? cold ? scared ? —— something else ignored by the blonde ?

a small grin twisted her delicate features, in an attempt to make the other feel more comfortable. the idea that the girl was shivering because of her refused to leave her thoughts, yet she could always try to compensate her.

❛ i am lost, indeed. you’d be surprised of
all the places i have ended up
after following butterflies or birds. ❜

The birds here are sweet and lovely and kind, very much so!

I have not ever thought of following them…! ’

Her eyes brightened at the possibility. If this person travelled from far away, she was assuming, then what kind of places would she herself come across if she followed the birdies too? Would the lands she cross be like the stories she was read, once upon a time, of glitter stars and cherry-syrup oceans?

’ What sounds did the birds make?

Talking about her feathered friends seemed to loosen something in her; the smaller girl’s stiffened shoulders grew lax again, and the shaking in her hands and legs soon subsided, until all that was left were occasional tremors. There was still a lower note of something she felt earlier, but compared to the few minutes before her outlook on the stranger had completely flipped.

the shaking does not go unnoticed.
yet she prefers go to with the basics.

Her shivering does not stop. Why is this? What is happening? Is she getting sick? She has not fallen ill in a while.

’ Thank you for asking!

I…do have another question to ask you, however,

if you are alright with me doing so. ’

The child hoped she was not stepping out of boundaries by continuously dealing out questions, but it was protocol to do so, wasn’t it? Besides, she was curious with the answer she would get!

This forest, from what I have seen, is very large!

Did the squirrels track something in again…? ’

and discover things I haven ’t before.

It’s only coincidence that I’ve stumbled wherever this is.

to covet the unknown and learn more of it, right?

…In that case, would it be rude of me to ask where I am?

so, since Khaos is finally at her next
hundred, I’ve decided to do a small giveaway for
her hella lovely followers bc all of you are my bbies
already, even if we just mutually follow but rarely
speak okay. ilysm u butts. anyway. so in honor of her
hitting her next hundred, here we gooo.

’ something about you makes me uncomfortable.
wait——- i know what it is, ‘

…I don’t think I understand.

Should I leave, if I am?

…I didn’t mean to make you uncomfortable, if I did!! ’

Reblog if you’re an indie personification blog. A list will be made and updated as people reblog.

#out of purity, #innocence personified
115 notes · See All
oguile·6 years agoAnswer
3 through 10.

3. Name one or more of their bad habits.

5. What is one thing they do that can negatively affect their relationship with friends?

7. What is the biggest mistake they’ve ever made?

8. What mistake(s) do they continue to make/have not learned from?

9. Name some of their major physical shortcomings.

10. Some of their emotional shortcomings?

#questions and answers, #ask meme
1 notes · See All
Next Page