- Full title: Love and War, based on a song by Fleurie

*I do not own any gifs or pictures*

*STILL IN THE PAST, AT THE AIRPORT BATTLE STILL*

Rose steps forward as Steve leads them ready for the fight. They begin to jog, turning into a full sprint as they clash, those few flying in the air to crash together. Rose slides against the ground again, making T’Challa jump over her as she turns to stand and flips in the air towards Spider-Man.

She dodges Wanda’s moving debris, kicking the boy as she lands. He falls to the ground as Rose moves towards Wanda who threw Natasha against something away from Clint.

“Go to the jet, use the code 69251, it’ll open the door and check the hack. It should be close.” She urges as the boy stands and shoots at her. Rose flicks her hand for the shot to divert to the concrete. Spider Man slings himself at her, his feet connecting to her back as she hit the ground hard.

“I’m sorry.” Spider Man speaks through his mask, as Rose’s helmet was cracked. She pulls the plastic eye cover from the helmet, her face covered in a thin white mask except her eyes. She stands and kicks up hitting his abdomen, and flipping around to kick his legs out.

Rose diverts away, kicking T’Challa away from Bucky last minute as Wanda throws him through a metal walkway. She pulls Bucky to stand, giving him a nod as she rushes towards the Prince.

- Full title: Love and War, based on a song by Fleurie

- I do not own any gifs or pictures*

Rosabelle sighs, her hands zipping her small duffel bag shut as she glances to the letter on her white wooden desk. She grabs it softly, looking up to her Father who stood in her doorway..

“Are you ready?” He asks, moving to hold her duffel bag in his hand. His brown eyes scanning her matching ones as she nods.

“I have to talk to Peter. I’m making a stop in Scotland, before I meet you.” She adds, passing him in the hallway.

“I’ll drive. What is in Scotland?” Daniel, her Father, asks;making Rose tense only for a second.

“Something for Mr. Stark, for the internship, since we’re going to Europe.” She lies, sliding her letter into her small bag.

“I’ll also be there in a day or so, I’ve got to finish some work here.” He continues after nodding to her statements, surprising her slightly as he follows her to the door.

“You can’t be protective of me if you see him.” Rose continues as he locks the door behind them.

“I’m your Father, it’s apart of the job description.” He pushes as they walk down the stairs of their apartment building.

“You’ve sucked at important parts, Dad.” She responds back with a playful glare.

“Okay, I can get behind that. But that doesn’t mean I won’t think about doing it.” He adds lastly as they step out into the nightlife of Queens towards his SUV.

Rose steps out from the SUV, quickly hoping to catch Peter getting ready for sleep. She pauses before his Aunt’s apartment door, quietly knocking as Peter answers it with a toothbrush in his mouth. Suddenly choking, he ran to the sink and washed his mouth quickly. Peter rushes back with a shirt on and an embarrassed smile.

“Hey, Pete.” She says with a smirk as he chuckles and pulls her in for a soft kiss. He smiles as he pulls back looking down to connect their hands.

“What’s going on?” He questions and she looks back up at him.

“Oh, where?”
“Scotland, then Bucharest.”

“I got to help someone, then I’m going to meet with my Father to go meet someone.” He pauses his questions as she gives him a slight smile.

“Yeah, my Father’s going later. I’ll text you once I land, and let you know how everything is going.” She promises and he sighs with a smile and kisses her again.

“Don’t have to much fun while I’m gone.” Rose jokes lastly as he hugs her and pulls away.

“I will try not to.” She gives him another last kiss and pulls away, disappearing from his hallway as she headed off to Scotland.

@doodlingleluke did a wonderful job here. It was a 5$ commission and it was totally worth 1000/1000 show them some love if you are able! 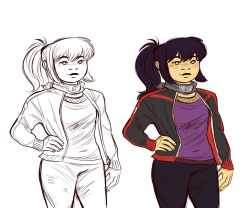 #Im just fangirling, #But I love it so much!!, #Mun talks
4 notes · See All
needlessweirdo253Audio

“Found loving you was sunshine, but then it poured, and I lost so much more than my senses.”

to start, can i just say that i am slowly falling in love with your fc? she’s absolutely gorgeous. ok so lemme ramble real quick about you   /  your blog. my friend bought me a scarlet witch comic because he swears i’ll love her, i haven’t had time to sit down and read it however i do love her, because of you. it’s obvious to me that you enjoy the character you write, and you work hard on her and it’s just so nice to see. i love, love, love having you on my dash, especially when deepika  ( i hope i spelt that right lmao ) makes an appearance because god damn she’s a beautiful woman and i think she’s perfect for wanda. oh and don’t get me started on your writing, it’s so flawless and just … teach me your ways ok.   i’m probably gonna read the comics because of your blog.

#this probably makes no sense, #im just fangirling, #only over a real person, #totally message me if I could can come freak out to you please
0 notes · See All
thechroniclesofajennyText

GUESS WHAT WE’RE GONNA READ IN MY ENGLISH CLASS.

THE BOOK OF GAY

You literally made my day yesterday💕
From your little funny nicknames and comments. To your loving warm hugs. To when you just played with my hair and stood really close behind me. LOL And that one moment… UGGHH THE FEELS!! You’re just so adorable and perf~（＾ν＾）

#love you so much, #im just fangirling
0 notes · See All
kimmaypancakeText

#dont mind me, #im just fangirling, #over a boy, #no hes not fictional, #although i am eternally fangirling over hayden upchurch, #personal
1 notes · See All
snowscharmingsText

When Jen tweets ‘so happy to see mom and dad’. it now has like a double meaning. and makes it 20000x cuter. oh god.

Can someone tell me how I’ve gotten a few of my favorite blogs to follow me?

‘Cause only one of my favorites isn’t following me!

#personal, #you can ignore me, #im just fangirling, #a bit okay
0 notes · See All
okeydokeydeanText

I missread a post about a headcanon and instead I read

“What if William became ruler of Hell”

But then the idea stick with me and now I want it to happend (in some AU) that after a long long wait and longer training with Mathers, William is able to master the magic and the power over the pillars to become the ruler of hell;  to live the life he always wanted, but in hell

Currently at the Geek & Sundry meet and greet with Felicia Day. Trying hard not to be a total weirdo. Probably failing.

honestly though i thought i already was so it was an instant follow tbh :DDD