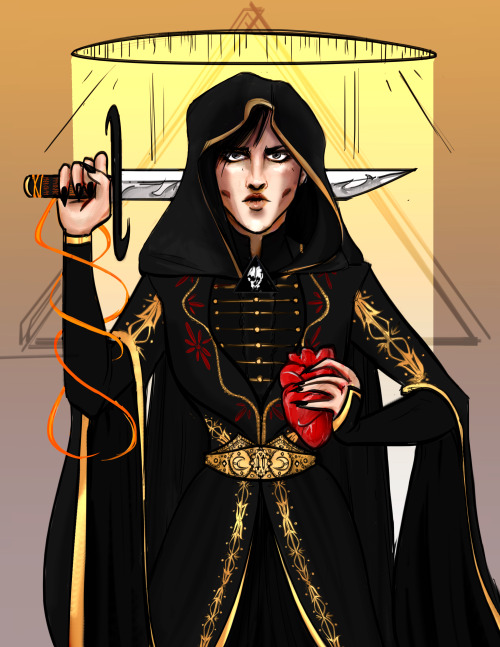 #Dungeons and Dragons, #dnd, #d&d, #cleric, #death cleric, #myrkul, #gold, #goth, #what inspired me? you might say... a florence and the machine song, #my art, #dnd cleric, #fantasy fasion
1 notes · See All
queernat20Text

Got around to finish my Mermaid OC, Amara!

TERF’s don’t even think about interacting with this post :)

One of my D&D Characters, Shaelie!

She is a chaotic good Lightfoot Halfling, and a Cleric under the Knowledge Domain and in service to the moon Goddess Selûne.

She’s intelligent and inquisitive, and is always searching for new information and knowledge, as well as long forgotten tomes and artifacts that she collects and sells to universities or archives.

She’s a good navigator, persuader, and healer, and loves to explore and find answers.

There’s been rumor of an ancient tome that contains the knowledge to access very powerful and dangerous magic, and for years she has been searching for it. Although whether she would part with such object like she does with most of her other findings is the one question she is hesitant about answering. 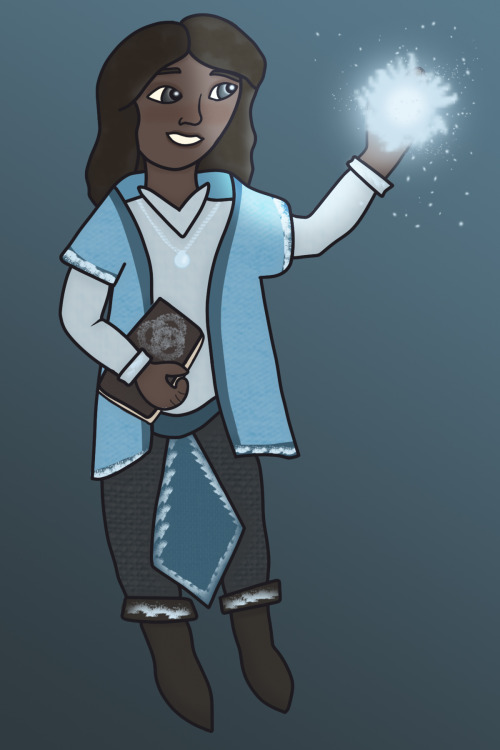 Tonight’s D&D session brought about… Feelings … For my PC

I was idly browsing the D&D 5e Player Handbook, and found the trinkets table. Simple items ‘lightly touched by mystery’

I love these. I know they’re standard, but they’re exactly the sort of stuff that kid!me, reading things like the Secret Garden and the Narnia books, always thought magic was made of

Like, some of them are normal and lovely and slightly sad, like the chess piece and the box of buttons and the crystal knob from the door, the sorts of things kids collect or magpies, and some feel like mementos, like the empty perfume vial to remember a lost lover (or mother)

Some seem overtly magical or plot-related, like the nightmarish idol or the iron symbol to the unknown god, or the divination card in your likeness. Or the bone pipes, because I will never forget Grimm’s ‘The Singing Bone’. The clapper-less silver bell also makes me think magic, because something tolling silence seems like an interesting ominous idea

Some seem nice and useful, like the unbending needle or the nightcap of pleasant dreams

Some are just odd, like the statue of the smug halfling (specific much?) or the cameo of a hideous person (hideous in what sense?)

I like these, I think I’m saying here. They’re lovely little flavour pieces. The sorts of things I’d hoard if I was a dragon or a cut-rate magical flea market stall

Some D&D jokes that will never not amuse me.

Bonus: Thieves’ Cant… Or Can They? 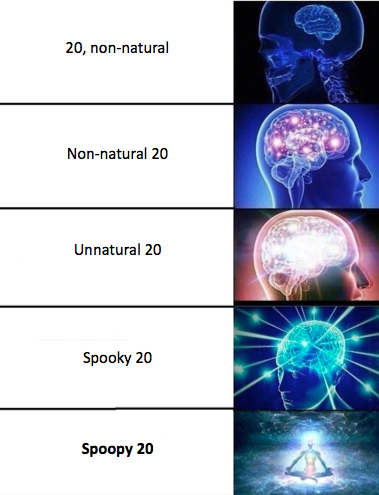 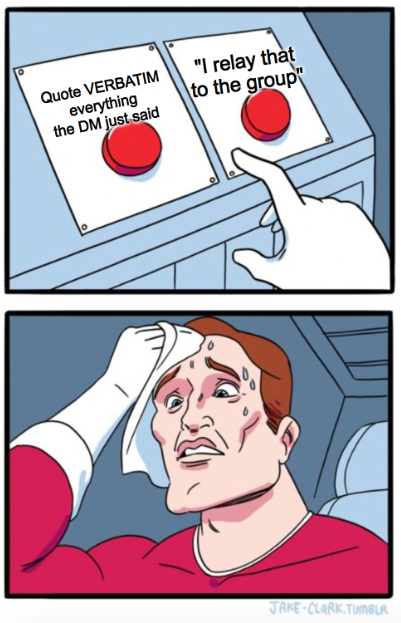 My D&D character, Kairon, Cleric of Sune, is pure!

You can find this, and the rest of my works at greeninkdraws on Twitter!

Session one: the one where the group goes shopping pt 3

As we exited the city hall, I could still hear my heart beating out of my chest. Of all the people, why’d it have to be him! The group decided to go shopping after recieving their reward money, and I needed to do something to calm my nerves, so I decided to follow after them. After all, I had just gotten to town, and I wanted to explore as much as everyone else it seemed.

It had been 4 hours and those idiots were still shopping. We were stuck in the blacksmith’s shop, with the halfling, whose name I discovered to be Gizmo, bartering over the price of an enchanted sword. He brought up the fact that they knew Nyx in hopes of getting a further discount, but the blacksmith merely smiled, and said “Oh, Nyx? He’s a bitch.”

I perked up, finally someone who knew the truth around here.

“So if we have a personal vendetta against Nyx, what kind of a discount do we get?”

I knew I fucked up when the blacksmith narrowed his eyes at me.

“A vendetta against Nyx is hard to come by these days.” He stroked his beard, then suddenly grabbed my arm and pull me closer.

“Your time will come,” he whispered. “You have to be patient, and wait.” I nodded in silence, taking in a gulp of air only when he released my arm and addressed the rest of the party on the price of the sword.

The blacksmith’s words distracted me for the rest of the party’s shopping time, and it wasn’t until the general store that I began to notice something off about the group. They all bought 200 feet of rope and grappling hooks, claiming that they were hikers and outdoorsmen. I decided to call bullshit and bought my own rope and grappling hook. Seneca shot me a look and I shot one right back that said “we are talking about this later.”

After looking some more, the party finally decided to leave and head to the tavern. I followed behind Seneca and piped up once we were clear of the store.

“So…” I started, “where’s this place you all are hiking to?”

“Keep your voice down,” she snapped, “and I’ll tell you at the tavern.”

i drew that gross cleric of kord again 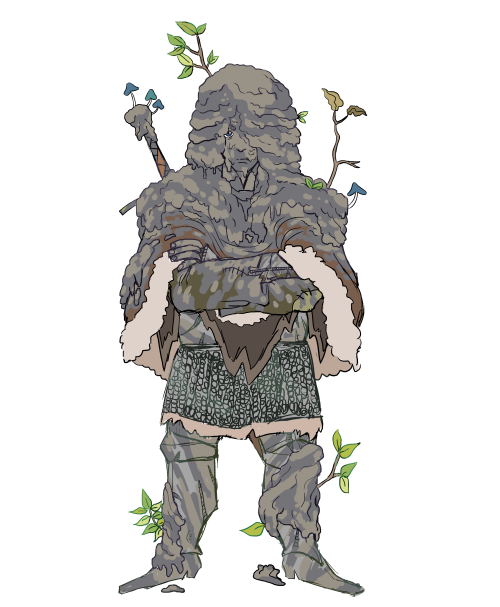 #cleric, #d&d, #dungeons and dragons, #i wanted to get the 'hasn't bathed in 20 years' thing across more, #decebal strix
2 notes · See All
k-worsham-artText

A necromancer is seeking to revive someone at a school (a medical cadaver, former professor, whatever) but the spell doesn’t revive the correct person, and instead revives a classroom skeleton hanging on a stand. The skeleton’s last memory is of being murdered by a mysterious assailant, who evidently sold their cadaver for money. Thus, they embark on an adventure to discover who killed them, all the while being chased by the necromancer trying to reverse the spell and correct their error in revival. Potentially ends in a romance between the necromancer and their unintentional resurrect-y, though it’s not earned without strife.

Kairos, Chosen of the Moon, for @sarellathesphinx <3 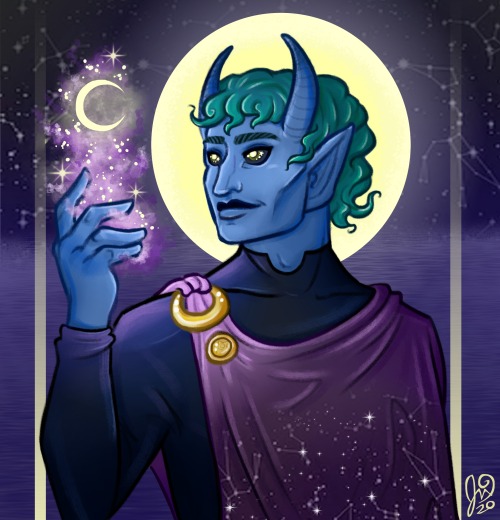 #moon, #tiefling, #dungeons and dragons, #D&D, #dnd, #LOVE YA EM, #stuff I drew, #we made good blue lads independently of each other haha
9 notes · See All
probably-anatomyText

And two more who y’all have likely never heard of unless you’re one of my irl friends or you’ve been stalking me irl which if you are, please stop that!

Tip: dont play dnd you’ll get too attached to an npc that dies, lose an eye to get them back, they come back as a mindless walking corpse, and you have to kill them again

Here’s a look at a finished set of the tie-dye dice. I’m not sure if I like the color choice for the numbers. Black or white might be better but if anyone has suggestions I’d be happy to hear them.

I do plan to sell sets like these in both the rounded edges here and sharp edge dice. I’ll be posting updates here as I work on the sets and as finished sets get listed in my shop. 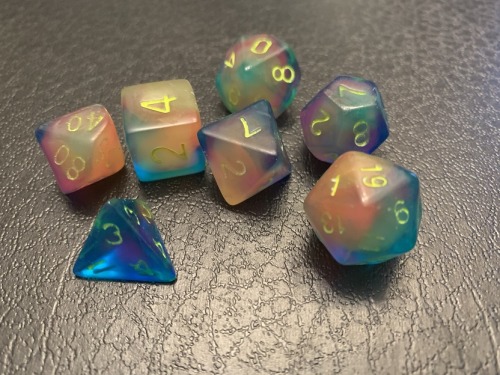 The tavern where every party finds peace, calm and a few drinks in between the bedlam. And maybe some buff chests.And the third appearance of the Skywalker Samurai. 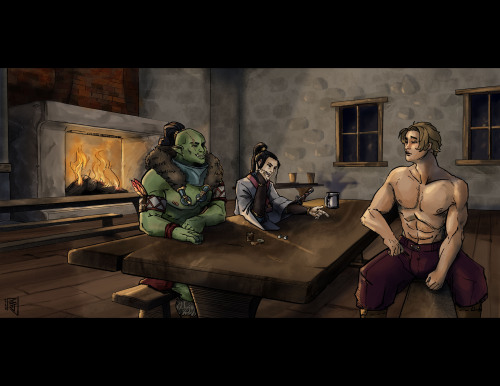 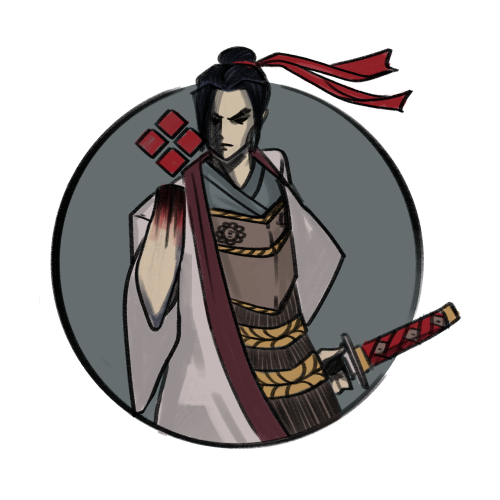 Me??? Still obsessed with Undeadwood and Clayton??????? More likely than you think.

Made myself a dragonborn. There names Jun and I’m not positive what calls I’m going to go with for them yet but maybe wizard. They like doing embroidery, bead work and jewelry making. 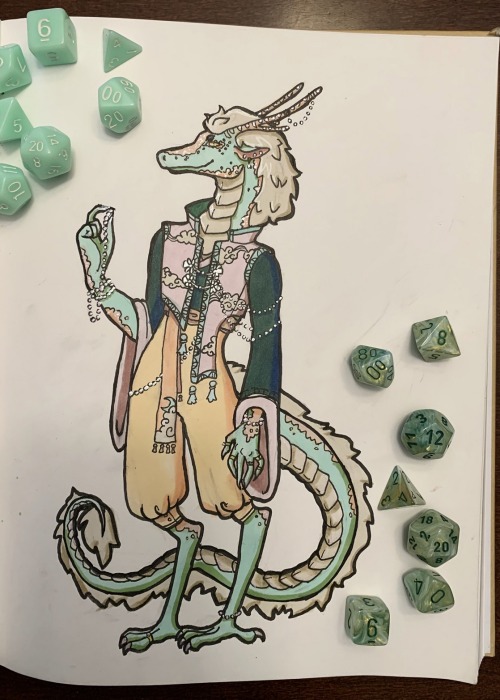 Made one of those wives really into D&D