Getting started here with this whole fandom mess, heaven help me.  I'm weak for Disney Ducks.

We looked inside some of the posts by hearmeouteliza and here's what we found interesting.

Beaks: Oh! And a ferrari! What could you possibly have that I don’t own too? 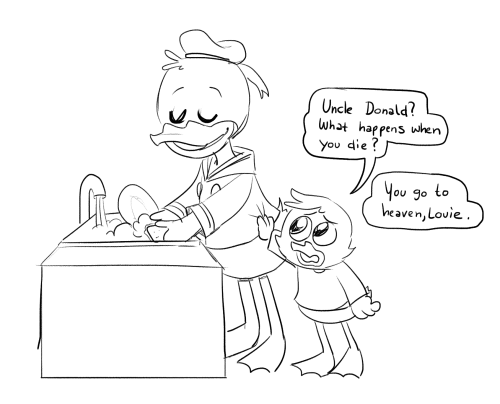 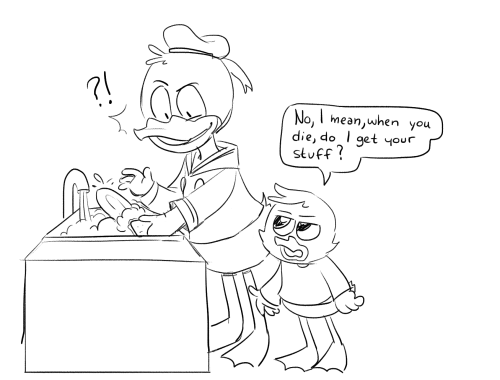 Scrooge: I’m going to need a duck skull but ye can’t ask why

Beakley: Only if you don’t ask why

Beakley: *Pulls four pristine duck skulls out from her handbag* Choose one

Scrooge: This one will do

it’s so dumb that broad shoulders are considered unattractive in a woman just because the ideal of womanhood is based on the perceived fragility of a smaller frame. have you ever seen a woman with broad shoulders? looks like she was sculpted by the gods themselves

#I want a woman who can break me in half, #women, #let's go lesbians
169K notes · See All
hearmeouteliza·8 hours agoText

I’m at work today, but it’s my home care job and the baby’s asleep, so have this little snippet I haven’t been able to work into anything else (but it’s been living in my head forever).

I love writing little Eliza so much, y’all. (Also, the scenario with her and Della was inspired by one of Allie Brosch’s stories in “Solutions and Other Problems.”)

Like most mothers, Bentina was particular about who she chose to leave her daughter in the care of. Unlike those same mothers, however, she had legimate reasons to believe her daughter might be in danger anytime she wasn’t under Bentina’s watchful eye.

Scrooge McDuck was one of the very few people Bentina trusted with Eliza (or at all), along with his butler, Duckworth. As annoying as Duckworth could be, he was loyal to a fault. If she had to leave Eliza for any length of time, McDuck Manor was the safest place for her to be. Plus, she had children her own age to play with there. Bentina had always wanted to give Eliza a sibling, but fate had determined that wasn’t meant to be.

She let herself into the manor as she arrived back from her latest mission, pausing as she found her eleven-year-old daughter tied to an office chair in the front room. Despite the circumstances, Eliza didn’t look terribly distressed. Della Duck popped out from behind the couch, very seriously telling Bentina, “Don’t untie her. She likes it.”

Sure enough, within a few moments, Eliza wriggled around like an expert and escaped her bonds, hurrying over to hug her mother. “Hi.”

Bentina patted the girl’s head, nodding approvingly. She had steadfastly refused to train Eliza in the ways of espionage, beyond basic self-defense, because she’d wanted her to have the chance to be a little girl. Still, Eliza was resourceful…maybe it was time to start. “Nice technique.” She picked Eliza up to greet her with a proper hug. “I missed you.”

#ducktales 2017, #bentina beakley, #Eliza Beakley, #ducktales oc, #dt fanfic, #I had to give Eliza a new tag for when she’s little, #I just really love her y’all, #and Beakley lives in my head rent-free so, #let them be adorable together
11 notes · See All
hearmeouteliza·11 hours agoAnswer

Hii, I was wondering, do you have any kind of reference for Phillip Beakley and baby Eliza? I love them so much!!!

Aww, thank you! I’m so glad…they’re my darlings.

Alas, I would l o v e to have a reference for baby Eliza…I imagine she’s a cute lil ball of floof, and I see her as a girly girl (who would absolutely climb trees in dresses). She’s got dark brown hair and her feathers are light, but not quite as white as her mother’s. I wish I could draw!

Phillip was inspired by Fenton, and I imagine him to be about the same height and build, with feathers about the same shade. His hair is similarly wild (if not wilder, but much darker…Eliza gets her hair color from him). He’s from Sullana, in Peru…his mother was indigenous and his father was Spanish.

If anyone wants to draw them, you’re more than welcome. ❤️ I tried to create Phillip in the All Ducked Out creator, like I did with adult Eliza and her husband, but it didn’t have the customizations I needed to get him to look right (where are all the wild hair options? 😊)…

#Phillip Beakley, #eliza vanderquack, #my writing, #ducktales 2017, #ducktales oc, #asks like this give me such a serotonin boost
6 notes · See All
hearmeouteliza·a day agoLink
You Learn to Live Without - Audrey_Lynne - DuckTales (Cartoon 2017) [Archive of Our Own]https://archiveofourown.org/works/27733894

Bentina Beakley hadn’t been looking for a domestic life, but one found her anyway.

When F.O.W.L. seems determined to take all she holds dear, she fights back. She learns to adapt to her losses.

That doesn’t make it hurt any less.

Me, actually having a day off work? It’s more likely than you think.

Will I actually finish this ficlet about my favorite spy grandma so I can actually get back to my other WIPs today? That remains to be seen…

#you learn to live without, #my writing
13 notes · See All
hearmeouteliza·a day agoText

One thing to keep in mind for Monday’s episode (which I’m definitely excited for) is that, like the Halloween episode, the Christmas episode was designed to be aired around this time regardless of the other episodes’ airing schedule…so it may seem to be a little out of place in the timeline.

The other thing you should keep in mind is that Webby’s outfit in the preview is freaking adorable and I want to see all the art of it.

scrooge, over 100 years old: this is my wife, beakley
beakley, 20-30 years old: absolutely fucking not. i will stab you 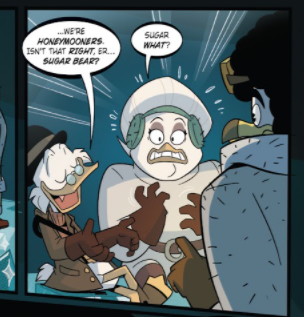 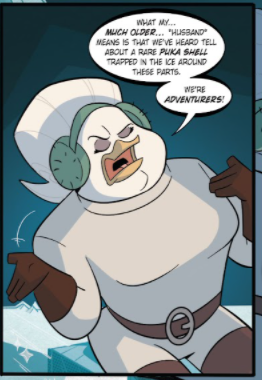 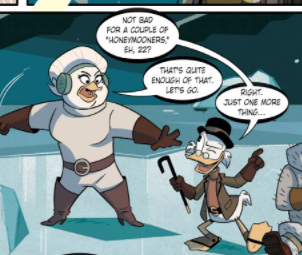 #everything about this comic is amazing, #they took the pretending to be married trope and just blew it up, #ducktales 2017, #ducktales comics, #scrooge mcduck, #bentina beakley, #her MUCH OLDER husband, #she’s so over his shit
261 notes · See All
hearmeouteliza·a day agoText

Me, actually having a day off work? It’s more likely than you think.

Will I actually finish this ficlet about my favorite spy grandma so I can actually get back to my other WIPs today? That remains to be seen…

Pepper: Oh no, Mr. Blot sir, its because Im the only egghead ever  get to volunteer.

Pepper: All the other eggheads thinks youre likea creepy freak or too intense or enterely unlikeable.

Honestly, him going out of his way to appear more likable after that has the same energy as Beakley making friends with Launchpad just to prove to Webby she has friends.

I mean, obviously she is, but it’s nice to see Beakley officially confirmed as Scrooge’s best friend. ❤️

I was not the only who noticed, good

I get that the point of the episode was the clan McDuck but leaving Beakley out of this piscture, a picture that was supposed to be Webby with her family...

This episode disappointed me in a lot of ways, this was just one of them.

The only answer I will accept is that she was the one taking the picture, but she still should have been in it. Camera timers are a thing.

what did you think about the new episode?

I didn’t hate it. It’s not my favorite, either, but the more I think about it, the more I think it’ll grow on me more later. I think it suffered from all the expectations and hype I (and the fandom) heaped on it (especially when compared to the previous Castle McDuck episode), which is not fair to judge the episode by.

I think that the fact that Hortense wasn’t mentioned might actually be significant; they’ve never really held back before about showing her picture in the background or whatever. There might be a reason that gets revealed later…because while it might be easy to shrug it off as poor writing/too much for one ep, it seems a bit too obviously absent to me…

The full magic of the castle wasn’t stolen, just the mists, leaving it open to return in a later episode. Also, PEPPER. I love her.

Matilda was great. I’m also thinking she’s still the middle-born child but literally the youngest because, physically, she hasn’t aged the way Scrooge and Hortense did. If they chose to swap the birth order, that’s a fair enough creative choice, but in the pictures of Hortense we’ve seen, she’s an old lady. There are those childhood photos of Scrooge and Matilda together, so she’s definitely not another kid Downey and Fergus decided to have while bored with immortality.

It’s a long answer to a simple enough question. I think I was underwhelmed for the reasons mentioned above; I had this one pegged for mind-blowing levels, so much so that I got up early to watch it before work. And we just got a kinda cute episode that had some questions I’d like answered, but nothing major.

People who both adored and didn’t enjoy the ep are totally valid, too; there are eps I didn’t love that others have really enjoyed. That’s part of the experience in fandom.

But I still can’t help to feel a bit underwhelmed, I guess I hyped myself up a bit too much for this episode.

I think this is it, exactly. I liked the episode, and it had some great moments, but I think I built it up in my head to be something it wasn’t…which isn’t the episode’s fault, really. It was cute, and a solid episode in its own right, but when I had it built up to be Huge, it feels a little like, “Wait, what?”

Webby stating that Matilda is “Scrooge’s youngest sister” caught me quite off-guard since she’s been the middle child in Rosa canon.

Either they changed that for the series or…

Since Frank said in his asks that out of Hortense, Matilda and Quackmore, “two are old and one is young” (paraphrasing here, because I cannot find said ask), I guess the young one here is Matilda.

What if she’s just physically the youngest?

What if Hortense spent quite some time away from Castle McDuck, which caused her to age quicker than her siblings?

So technically, by age, she’d still be the youngest, but is physically older than Matilda.

So when Webby says that Matilda is the “youngest” McDuck sister, it’s like

#i like this theory, #especially since it’s confirmed that Matilda spends most of her time at the castle, #dt spoilers, #the fight for castle mcduck
218 notes · See All
hearmeouteliza·5 days agoText

ADHD multitasking is having Spanish rice in the rice cooker for dinner, laundry in the washer, and a Word doc open to write…and forgetting about the other two because you got on a kick with the story.

#the keep warm function is a lifesaver, #but the dryer is still waiting on me i guess, #adhd brain, #actually adhd
3 notes · See All
Next Page