another delightful piece of pikelan art i commissioned recently! this one made by the wonderful @toriitorii! please check out their stuff!

this one is so goddamn adorable. we this discussed as the matching marriage portraits hanging over the mantle at the trickfoot-shorthalt-strongjaw household. (there’s one of grog higher up.) 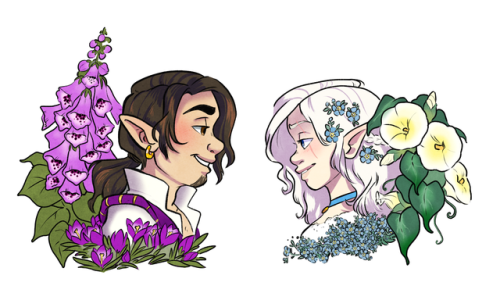 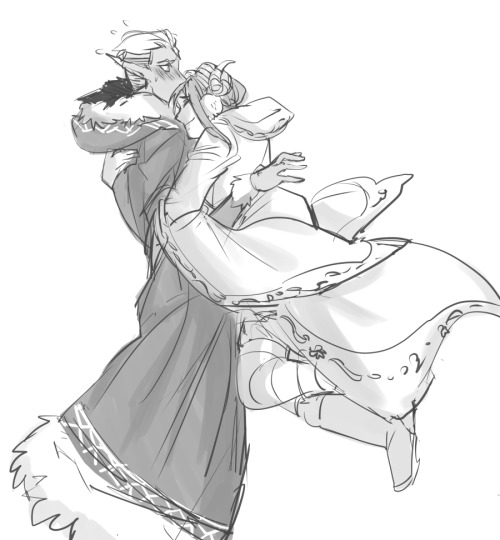 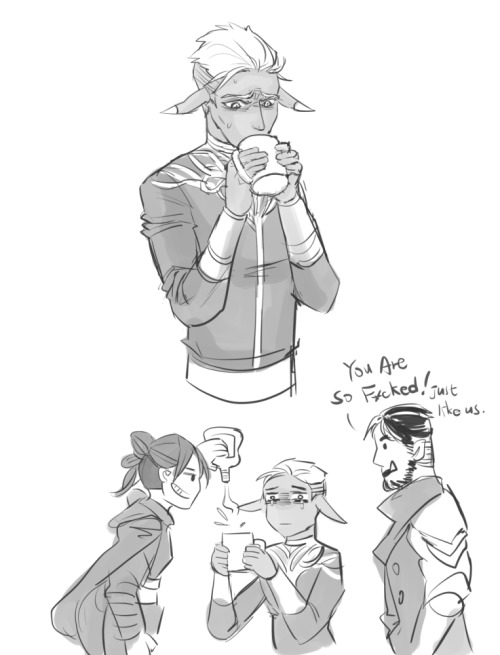 found this doodle not sure if i ever posted it

a spot of colour in a monochromatic world

[image id: a digital drawing of Yasha and Molly from critical role. Molly is on the left, he is a a purple tiefling with shoulder-length dark purple hair. he has tattoos of peacock feathers on his face a  sleeve of tattoos on his right arm. his coat is red with gold accents and colourful details. his eyes are solid red and he is looking up at Yasha, smiling, and has his had on her face. Yasha is coloured in black and white. she is a tallbuff  woman with light skin and dark hair with white tips. her cloths are simple and dark and made out of leathers and furs. her expression is subtle, but looks surprised and relieved. the background is dark, with a yellow spotlight on molly gently lighting the both of them.] 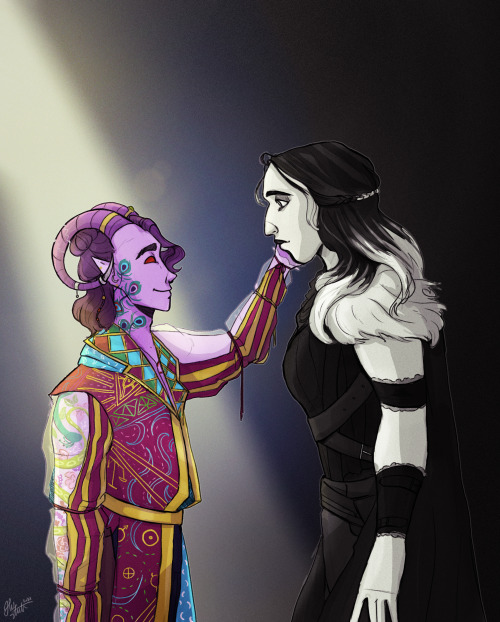 vox machina, at your service! Yasha from Critical Role!
She was carrying a spear the whole campaign and she didn’t notice 🙌 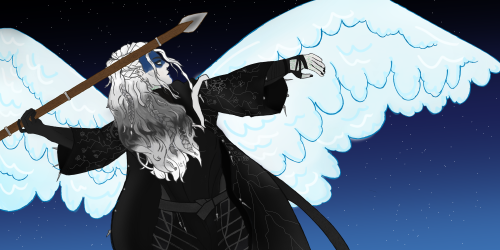 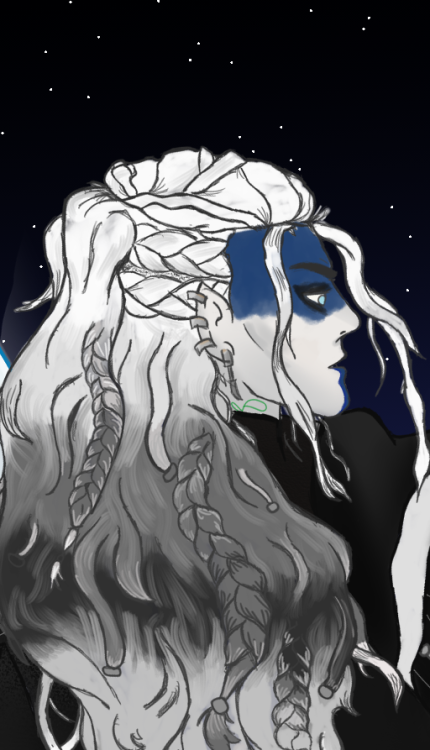 I don’t know about you, but that date gave me life. I had to make a little crochet tribute to it. 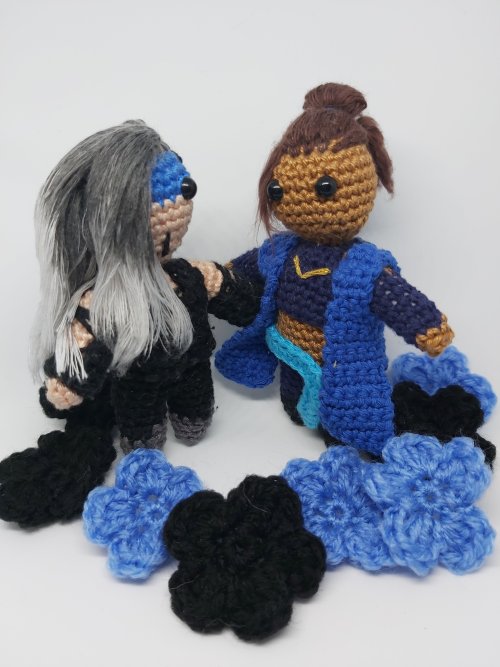 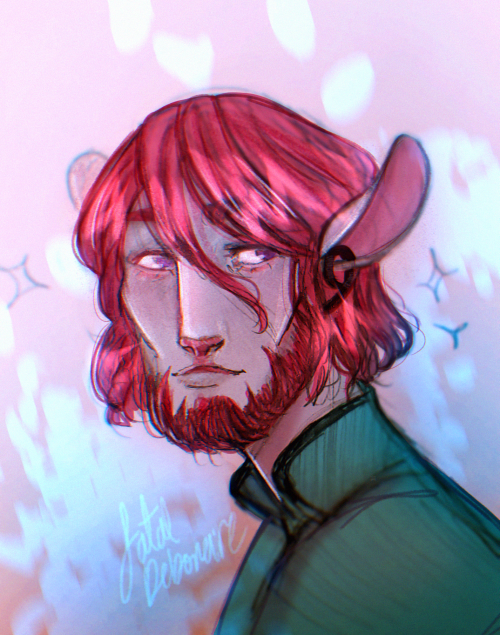 I’m fascinated by the fact that, per in-game conversations as well as both of their meta playlists, Caleb and Veth have one of the deepest and most important relationships within the Mighty Nein, but fandom tends to not engage with it.

And I think it’s because it’s so unclear what that relationship actually is. And that’s not helped by the fact that the characters themselves seem to struggle with a label for it, and might not be on the same page.

Caleb assumes he must be less important to Veth now than she is to him because she’s been reunited with her family. Veth, on the other hand, still feels as strongly for Caleb as ever and is even harboring a crush on him that she’s not acting on because of her marriage. They feel like “family” to each other, but there’s no easily transferable familial label either of them have found to help clarify or codify that feeling. Veth, while once using “parental” to make a point to the rest of the group about the fact that she was not a child (back in the days when everyone assumed Caleb was like a father-figure), immediately after that conversation and ever since has rejected “motherly” labels for their relationship at every turn. Caleb once used the word “sister,” but tentatively, and hasn’t tried that label on since. Veth feels something romantic for Caleb, but will likely never act on it due to her history and present relationship with Yeza, even as she’s uncertain if, while she loves him, she might not be in love with Yeza anymore. Caleb shut down an inquiry from Beau about if he was “in love” with Veth in a romantic sense, but it’s entirely possible he just refuses to entertain the possibility because he knows she’s married. Caleb does excel at putting his feelings into controlled boxes.

We know more what they think they aren’t than what they are to each other. And there’s pining there right now, from both sides, but it’s hard to call it strictly either platonic or romantic. So I can’t help thinking that fandom at large, getting frustrated as every label they try to put on Caleb and Veth’s relationship has been overwritten or rejected or transformed as we’ve moved through the campaign, has reached a place where it honestly doesn’t know how to define their love for each other, and so just doesn’t engage with it. 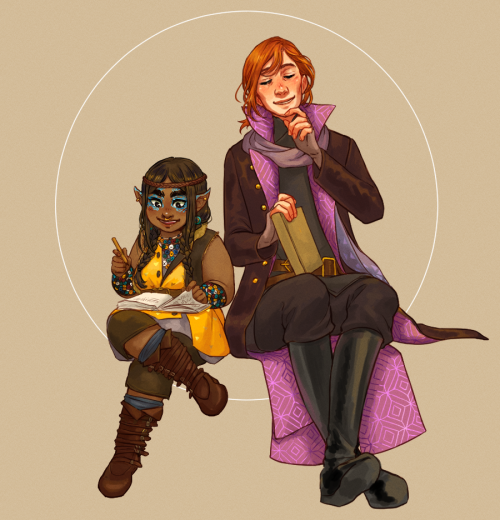 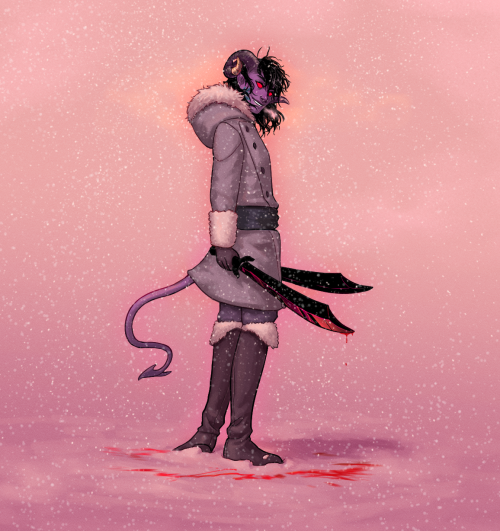 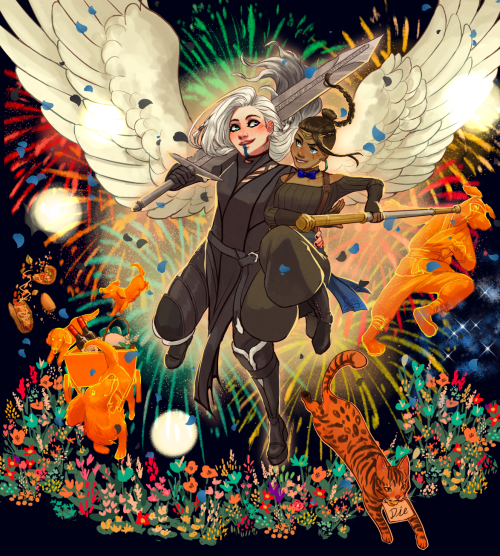 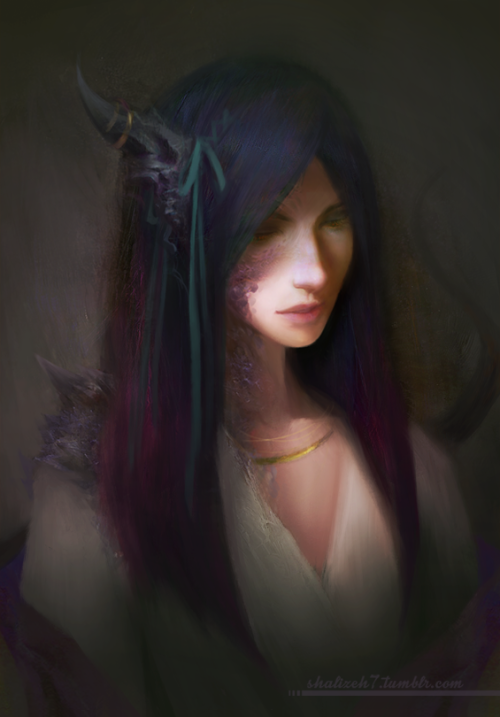 Laura has no control over Jester once she starts sending

Been rewatching some older episodes, the three always have golden interactions

how rural are you?

I realized I’d never drawn Reani before! And then I realized something even more important…. A druid growing up in Nicodranas? This beach baby deserves all the driftwood and seaweed bracelets in the world 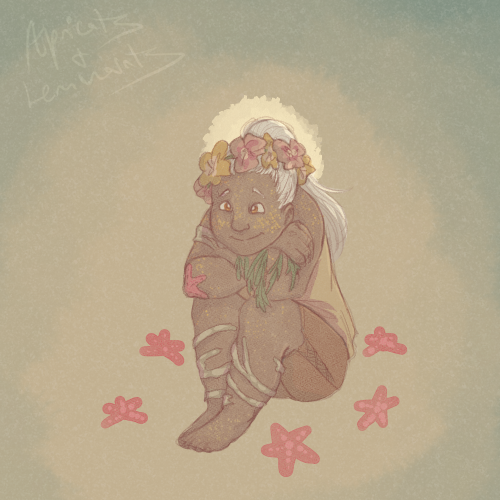