A gift for the amazing person known as @chillychillss or @blooming-garden-su lil baby!

i miight as well post this cus idk when i’m gonna make an official reference for it lol BUT here’s adult bloom! this also gives you a little insight on how the royal flowers are like 👀

fun fact: bloom!steven uncontrollably grows flowers on his body when he’s feeling a negative emotion. they go away once he’s feeling better, however

y'all already know my steven’s gonna be pretty damn feminine-

#steven universe, #blooming garden au, #bloom steven, #his dress was originally gonna be a lot more complicated but i'm not t h a t experienced, #& it looked like too much for the eyes so i simplified it jvffjjf, #ANYWAY THO i love my son-, #steven universe au
50 notes · See All
blooming-garden-suText

This is a drabble based off a dream my dear friend @aftermath-steven had involving our AU versions of Steven! I just thought I’d post it here since I thought it was interesting!

Thousands of sakura petals fluttered down from dozens of cherry blossom trees that surrounded the clearing. A big group of young men, most of them being around their late teenage years, sat together under some of the trees. They sat on a large blanket as they ate snacks from a big basket. Their chatter & laughter rang through the daylit sky, yet it was heard by no one. They were the only ones there, since they picked a pretty remote location that was deep within the forest of cherry blossoms.

Two teenagers, however, remained away from the group for the time being. One was named Bloom, who wore a pastel pink hoodie with a rose symbol ironed onto the front of it. His face was decorated with an array of freckles. The other was named Aftermath, who had long hair that was tied into a ponytail & was slung over atop his shoulder. Each of his two neon pink eyes differed wildly from each other, yet they were still a natural part of him, both still as pink as the ends of his hair. They each sat with their legs crossed, leaned against a sakura tree’s trunk. They ate their own peanut butter & jelly sandwiches in peace, with glasses of chocolate milk set beside them. They occasionally interrupted the tranquil silence to talk about their own lives. Their issues, their pasts, the things they wanted to fix… they were different, yet so similar as well in certain aspects. That’s what happens when one talks to an alternate version of themselves, though, isn’t it? 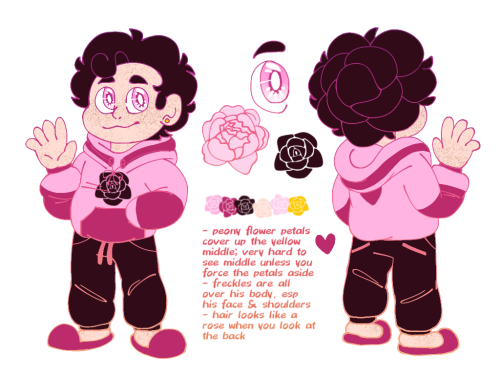