She/Her. 25 years old. Capricorn. Multishipper and a Crackshipper. Back in DanganRonpa Hell.

We looked inside some of the posts by fallenyetstillup and here's what we found interesting.

Send me an IM @impytricky-freelancing if you’re interested in a commission!

Want to read my TOS and see more examples with different price ranges for Sprite and Art Commissions? Click here!

Want to read my TOS and see what the different Editing options mean? Click here!

If you’re feeling generous, you can give me donations here!

If you can’t commission me right now, reblogs are always appreciated! Thank you!

Hey guys! I really need to upgrade my PC’s RAM so I can make more designs for my redbubble store, so I need to save up a little over $100.00 to buy the amount of RAM I need for the upgrade

So, I’ll be holding a 15% discount, as a sort of Autumn/back to school sale!

Please contact me over at @impytricky-freelancing to get things started! 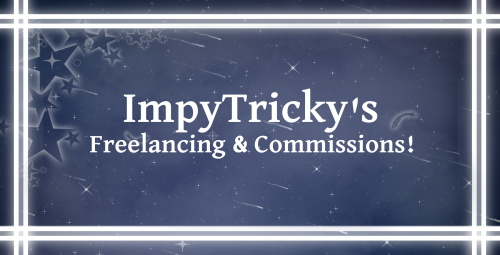 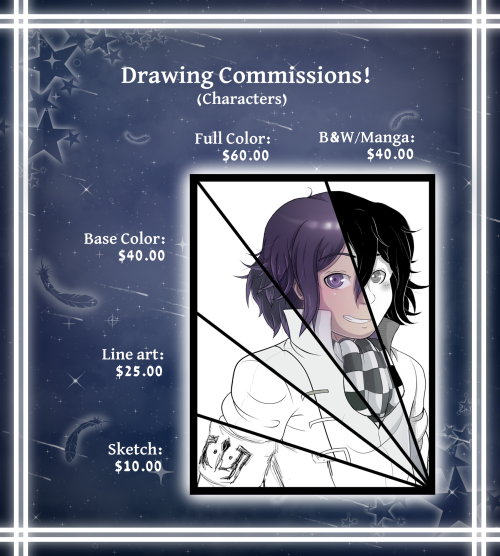 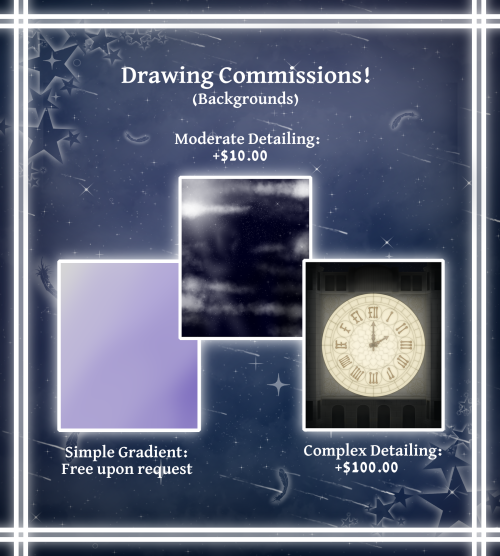 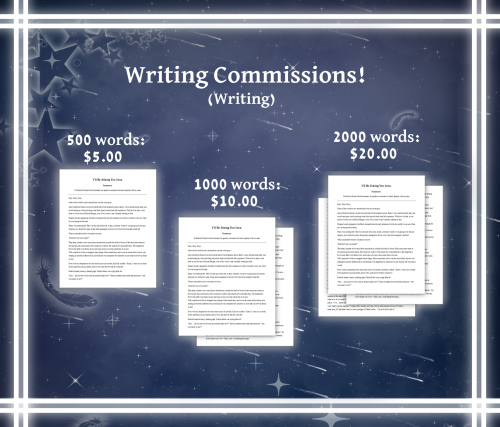 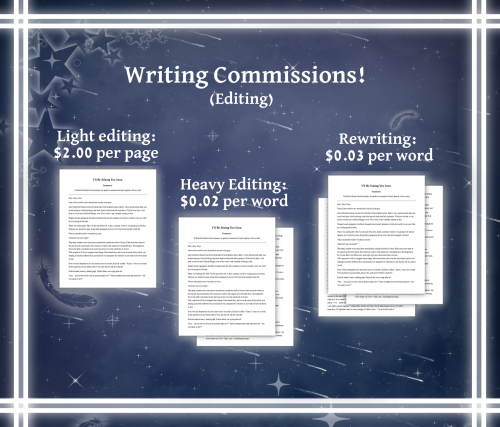 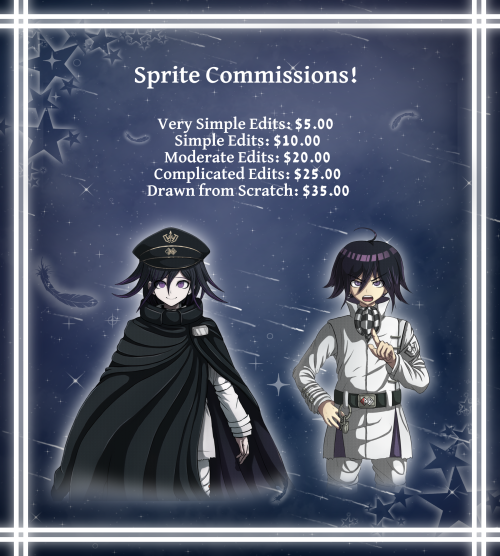 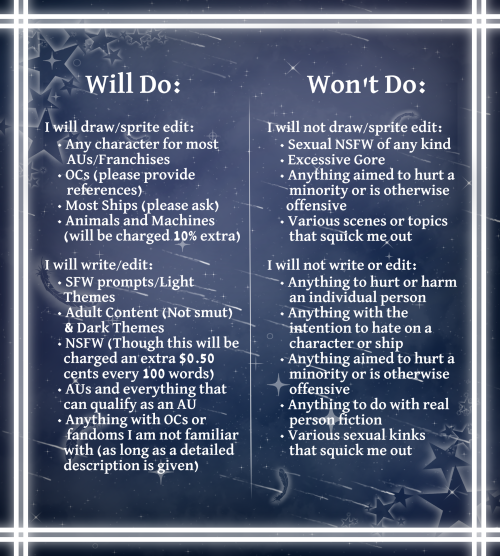 Any tips of breaking out of a writing rut?

EVERYBODY knows (or should) that you DO. NOT. STOP. in Vidor, Texas.

It’s best to just run out of gas elsewhere. Whatever you do, black folks, DO NOT STOP IN VIDOR, TEXAS.

There’s a good chance you’ll get lynched or just come up missing - and I’m not joking.

also do NOT stop in Harrison, Arkansas!!!! (relatively close to OK and MI) a nazi town with a BIG KKK organization.

Reblog To Save Life

Okay but like reblog to LITERALLY SAVE SOMEONE’S LIFE

They are called sundown towns and there are a LOT of them in the US.

This website has a clickable map where you can see suspected and confirmed sundown towns by state, as well as information about whether these attitudes are historical or current.

Reblog for the link

reblog for the link

REBLOG FOR THE LINK

If you are white, don’t stop in any of those towns either; spend your money elsewhere.

Mom help I haven’t had physical contact with another human in over a month and I would kill for a hug.. any tips from the quarantine king

“Warm blankets and hot drinks are going to be your best friend for the next few weeks! Be sure to have plenty of phone calls with friends, so you don’t lose the humanity in your interactions. And be sure to stay hydrated and clean! It’s an overlooked detail, but we have to keep treating ourselves well. I’m so proud of you for being this strong! Stay hopeful for me, okay? And it’s not the same as getting a hug from a real person, but I offer them. I learned that I can’t really get sick through the screen, so it should be okay!”

✭ Thanks for stopping by!

My Secret Santa piece for the saiouma pit, mine is for @personified-smol who wanted fluff with implied big angst. WELL. I did more than imply it because I couldnt figure out the animation flicker I wanted with my new computer/less programs, so enjoy a prince coming for a sleeping ruler~

EDIT: Had to reupload, the image files shrunk for some reason the first time. 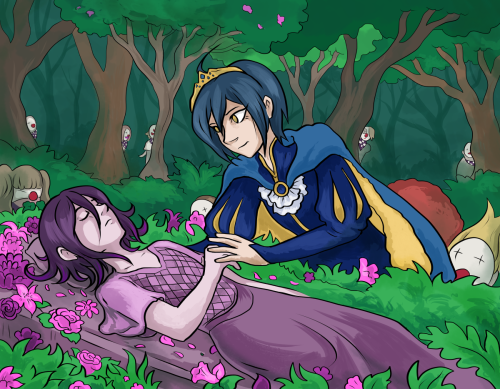 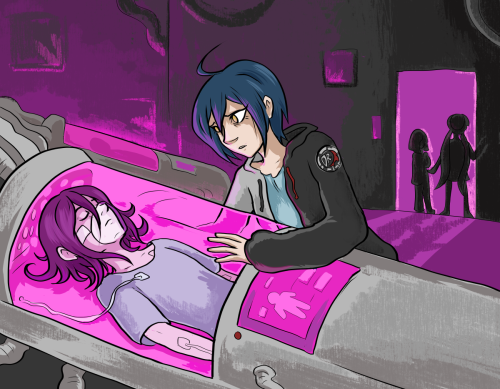 How much I wish they would spit it out to each other. XD 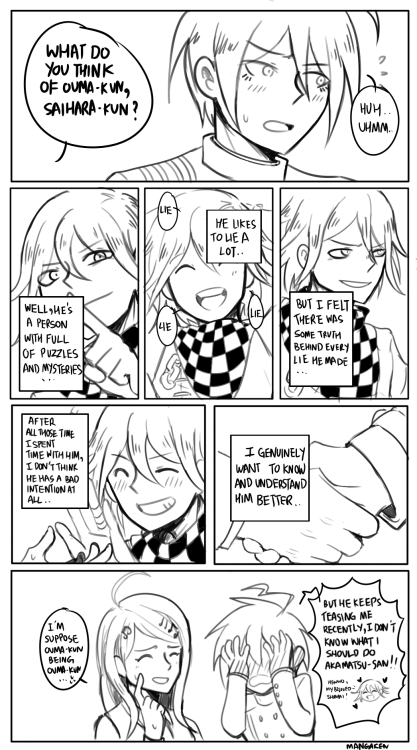 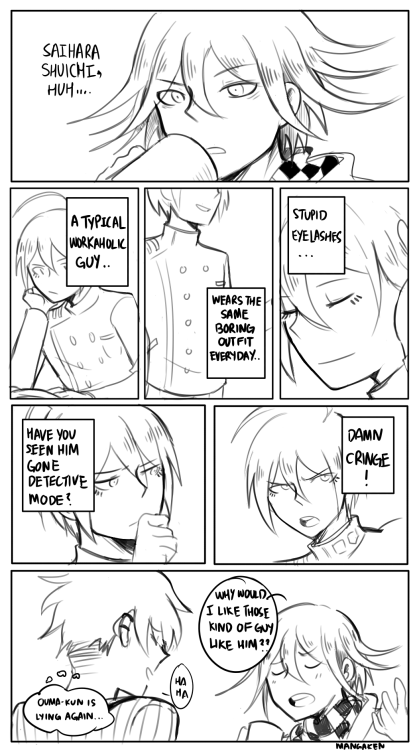 I literally felt like I did not have a choice.

did i even really have a choice?

i hesitated for a second and then considered the repercussions

if Robin says reblog. You reblog!

It’s at a million now do 2 mil

Fuckers better reblog or you won’t get any wishes.

We miss you Mister Williams.

I certainly hope so, @nerdasaurus1200 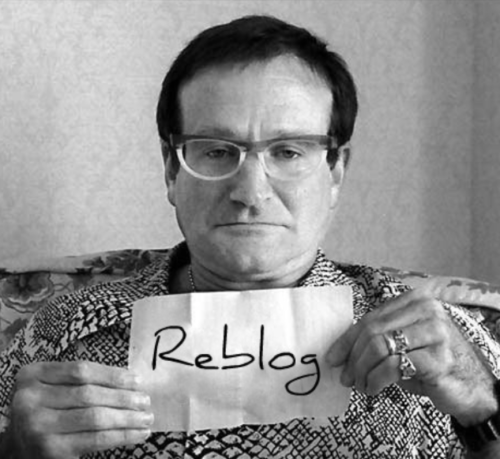 Hey y’all!! Just here to say that there’s a DR Rareship Discord if you wanna join!

YES! You can’t tell me otherwise he wouldn’t want this to be possible. Oh my, Shuichi’s face. XD

Description: Kaito, Shuichi and Kokichi pile into an old car and drive away from their troubles.

The sun beat down on the bill of Shuichi’s cap as he leaned against the window, watching the signs flash by. The map was loosely grasped in his hands until they got closer to their next exit. He crumpled it a bit, tightening his hand, then letting it go again, staring at the tiny creases, like new markings on the face of the region. Maybe making somewhere new, just like they were hoping to find. His half lidded eyes drift to the driver’s seat, where Kaito sits at the wheel. His overly large sunglasses and gel free hair made almost look like a stranger, but the big grin on his face despite everything and his hand tapping along to the song playing through the crusty speakers gave him away.

Shuichi shifted his shoulders with a wince, and turned to glance into the backseat. Sprawled across the entirety of it was Kokichi, seemingly asleep. The hoodie he had been wearing was pulled off and thrown over his face to blot out the sun. He hadn’t said much since the argument about seatbelts, and the middle one was still awkwardly clipped around his waist, even sideways. A bump in the road bounced him up, and Shuichi heard a groan under the fabric.

He turned back to the map, and then out the window. A rest stop was coming up. His tired eyes widened a little.

This was so incredible! You hit all the right feels with them given what they’ve been through! Goodness, this is so good to be a stand-alone or strike you as a “to be continued”

About that Liku’s post (💖😫) I wanted to say that when you love really much a character, or even someone real like a singer or actor, I think after some time it becomes normal you can even make fun of him/her, ironically, let’s clear, because it means he/she is more familiar to you and this is such a beautiful thing and Nalu fandom got this quality.

We can make fun of them as we can criticize them whenever they do somethin we don’t like, like it happened with chapter 23, because loving a character doesn’t only involve loving him/her and admiring him/her endlessy, but being able to acknowledge his/her flaws too.

So yeah that’s why here on tumblr i love the fandom, because we all are able to stan Natsu and Lucy not in a toxic way, but in the right way.

Another birthday gift for best boi because I couldn’t resist

Come on Shumai, he worked so hard for this!

what more could you fucking want 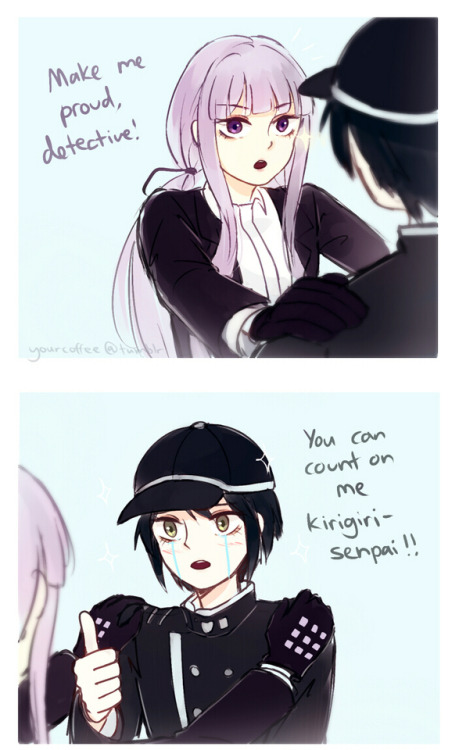 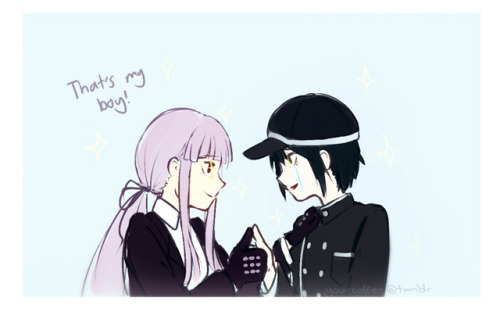 Make yourself with this picrew (made by the awesome @sangled) and tag up to 8 people! I’ll start

I WAS tagged, thank you Izzy <3

I was tagged too ^.^ by my lovely wife

Here’s my Avwalya, I didn’t get all the right colors but close enough! 😅

I thought this was cute!

As close as I could get to Jak! The damn ponytail that works comes in this weird black and red two-tone, alas.

I’m getting way too into dollmakers recently. I blame you @sedatayuun I’m also tagging you.

So, I, uh, got mixed vibes about whether it was supposed to be us OOC or our characters…. so I did both! Because I had a lot of fun with it. Have a Maximiloix and a Maximilian!

Thank you for the tag!

My hair is currently blue, but they didn’t have the right shade so I put my old hair color

And @anyone else who would want to do it!!!!

I have two pictures! One of them is more like my avatar or when I’m cheery and the other is when I’m studying lol (yes I wear glasses!) I also have a few acne scars but I forgot to put it 😅 (I’m also pretty self-conscious of myself so-)

@relxion-kunp @ixdoxdanplanxstuff @stephens-knife @hosuhs-hairtie @dansthemanwiththeplan @danplan-fanclub and other people if u wanna! (I’m sorry I don’t know how to tag QwQ and I’m sorry if you’re already tagged pls forgive me)

anyone can do this

thanks for tagging me bab!!

This was so cute!! Thank for the tag Kaede!!

The art style? Adorable. So much variety and styles I love it!! I feel like it looks a lot like me too sjkdksk

No pressure at all if you don’t want to 😊

Ooo, this picrew. I’ve actually used it before so I got some pics already, but this is still cool. Both versions jump between accurate and not for how I look (ie my red is dyed red rn,but I don’t have any piercings,) but still I like them tbh

As for tagging, well I guess really anyone can do this, but in particular why don’t @jeanetulip @selenashuu @illusion-of-sea-axes @megastarstrike and @elivie if y'all haven’t been tagged yet and wanna give this a whirl, go for it.

I couldn’t decide which one I liked better so have both! Also I guess I can tag @cheshirerising , @golden-redhead , @rev-eeriee , @fallenyetstillup !

This is totally optional but I hope y'all try it out. Especially since I had fun with it ouo

Don’t mind the grumpy expression, my face is like that. Whoops.
@byakuya-mioda @lore-a-lie @saiharakaedes @alottaribbons @jadeologie @queenroseskull ​
You can chose to do this too as I know I had fun with this.
(Thanks Zetta for tagging me)

Please carry on, they all scare me to different degrees but I love them all the same 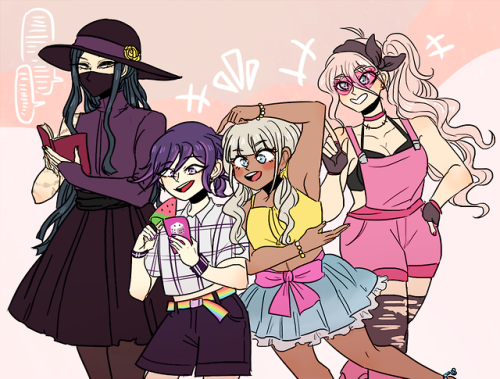 Hey I’m not actually dead. But I got something to share with y’all!

and a few of my friends set up a Saiou AU server where you can share, support, and even just read !

it’s still new and most of the channels are empty, but it’d be appreciated if you can help us expand! Even reblogs are helpful.

My all time favorite DR BROT3! 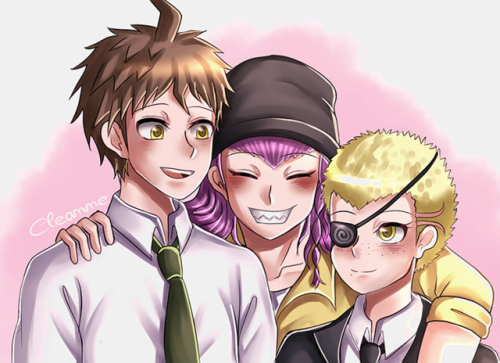