21. believing in you even when you couldn’t do it yourself + figayda (prompts linked here)

(some post-show hurt/comfort heavy on the hurt on the phoenix tour after sophomore year. thank you, anon, i find ayda very fun to write but this is my first figayda! i hope you like it. )

That’s the thing about this particular kind of bad show—that she knows it was a bad show, and Gorgug knows it was a bad show, but if you hadn’t been listening to the same set for the days and days and days of tour for their second year now, you wouldn’t know. They keep the rebellious-happy smiles on their faces and they still jump and dance across the stage and the Infaethable Bass still makes glorious noise and Fig pours her heart out into a show even when from the very first chords she can feel it’s wrong, wrong, wrong.

Fig doesn’t know if it’d be better or worse if no one else in the world knew it was a bad show, and she doesn’t know which one is true anyway. But inside her own head it’s grating and terrible and Fig barely held it together until they got up to the hotel room here before she let herself collapse, angry and upset and unreasonable and not caring or knowing about any of it.

The roar of the crowd tonight felt like mockery when Fig could hear every ever-so-slight way her solos weren’t quite right, could feel her fingers scrabbling to turn a mistake into a riff when she screwed up, could feel the talk sets not quite landing even when she puts every point of her charisma into it. The stage spotlight effects were just the tiniest bit late, and it feels like a perfect and perverse kind of validation when Fig would rather have ripped their too-hot too-red glow off her face before they could highlight every mistake she made, every fake smile pasted on.

She’s being childish, but right now Fig has wedged herself under the desk in this hotel room that’s the same as every other hotel room for two years of tour. Her horns are scraping the underside of the desktop with an excruciating sound that just might as well happen, and her back is pressed into the mess of cords sprouting from the outlet under the desk, and Fig’s digging her pointed fingernails into her own knees as she hugs them tight and feels like a toddler in a tantrum, unsure if she wants to scream or cry or hide or demand attention or destroy things or walk out into the city and keep walking until she’s far far away. She kicked the rolling chair somewhere away and couldn’t tell you where it went for all the gold in Solace.

Her bass doesn’t fit under here with her, and Fig’s tossed it on the bed with more upset carelessness than she’d ever usually show her instrument. Fig picks at the rips in her jeans and scowls out of the opening of her little desk den, an opening that feels too big, letting too much of the world in even when that world is just the bed across from the desk, with frumpy sheets and a bed skirt that’s the same as every other motel anywhere in Solace, which Fig knows from experience.

Gorgug knows it was a bad show, and Fig can faintly hear him in the bathroom on the phone with Zelda, quieter and lower than other nights on tour. He called his parents earlier, too—she heard him singing quietly to them over the phone.

Ayda knows it was a bad show. Ayda was in the green room and in the audience tonight, watching Fig fall apart, knowing so much more than Fig knows all the time, deserving so much better than the mess that is Figueroth Faeth on stage and off. Ayda knows it was a bad show and she’s not even in the hotel room with Fig right now, having disappeared somewhere off down the hall. Fig was too angry and caught up in her own mind to pay attention, which is just another reason Ayda deserves better right now. Anywhere that Ayda is right now is somewhere better than dealing with Fig in all her skin-itchy unreasonable childishness right now.

There’s a little tic tic tic of giant talons on hotel carpet and a whoosh of fire-warm air as Ayda appears in the doorway, as infuriatingly and as luckily as if Fig had said her name thrice and summoned her. Fig keeps quiet and watches her girlfriend turn first one way, then the other, looking for her in a room with neither Fig nor Gorgug visible.

“I’m having a bad time, Ayda,” Fig says, voice quiet and hoarse both from the show and from whatever silent-sobbing-tantrum she’s been having under the desk. She doesn’t even know if she intends Ayda to hear it, but then Fig sees Ayda whip around and move towards the desk, even faster than walking as she beats her huge wings once to take a flying, bounding step.

Ayda doesn’t listen to any warnings Fig might try to give about how it’s “really a bad scene under here, you don’t want to see me like this” and just crouches down so she’s under the desk with Fig, spreading her wings to block out everything except the two of them in this ridiculous position. Fig can’t see anything except her girlfriend and her big concerned eyes darting around Fig’s face and her fiery wings blocking out the world for her.

Fig doesn’t even say anything, just reaches out and scoots closer awkwardly on her butt on the floor in the small space. Ayda doesn’t need her to say anything, just tangles her legs with Fig’s and loops strong arms around Fig’s back, holding her close. Fig takes an angry, shaky breath and feels it push against Ayda’s arms.

“You’re upset,” Ayda says simply, fingers tracing a shape on Fig’s back as she waits to see if Fig wants to talk or just wants to be held.

Fig hisses through her teeth, irritated but not wanting to take it out on her girlfriend who’s barely been here for half a minute and who’s already making her feel so much better. Ayda’s fiery hair and wings are the only light in this little space Fig’s wedged them into, and they’re casting bright bright light over the both of them. Fig reaches out and tucks her face right into the crook of Ayda’s neck, so close to the fire of her wings that she can feel their warmth. Fig can’t see anything except the curve of her girlfriend’s neck and a little bit of her back and flame, flame, flame. She wonders if there are tear tracks visible on her face. The nice thing about tiefling skin is that no one can tell if her eyes are red from rubbing at them; the nice thing about Ayda is that her girlfriend doesn’t need to be able to see them to tell something’s wrong.

“It was a bad show, Ayda,” Fig whispers almost too quietly to hear except that she’s doing it inches away from Ayda’s ear. “I hate this.”

“I’m not sure I understand?” Ayda says, fingers slowing on Fig’s back as she picks her words carefully. “You are the expert on this, and if you do not want to elaborate that is perfectly okay, but all of your shows are good ones to me.”

Fig turns her head so her cheek is resting on Ayda’s warm shoulder and says, “It’s just little dumb things going wrong. And that’s why I’m doing this dumb thing, which is sitting under a desk and thinking you don’t want to see me.”

Ayda’s fingers circle over the knobs of Fig’s spine through the leather jacket Fig hasn’t taken off.

“That doesn’t seem dumb,” Ayda says. “I understand wanting to get away from the world when it feels like everything is going wrong. Under a desk is an excellent location, because it is dark and quiet and Gorgug is in the bathroom so you can have this space for yourself.”

“Oh, Ayda,” Fig breathes. Ayda keeps talking, and Fig watches just the corner of her jaw moves as she talks. Ayda talks to her gently, like you’d talk to a slightly skittish animal. Every part of Ayda looks soft and warm, including the fiery feathers tickling Fig’s face.

“Your lyrics are extremely meaningful. I have memorized many of them, but I am still impressed all the time that you have written all of them.” Ayda says it matter-of-factly, and Fig blames the way that the words make her want to cry on the fact that it’s just been an extremely emotional day. “You are a very accomplished musician, and an even better writer, and an even better person.”

“You’re very smart, Ayda, but how am I supposed to believe you when I can’t even deal with one show going wrong?” Fig tries not to wail it. She doesn’t know if she succeeds. Ayda’s wings make a soft roar, the sound of air and flame, and Fig pretends that it’s loud enough to hide the tremor in her voice. The childish panic.

“I do not need to believe in you. Belief implies that my trust in you is something constructed in my own mind, when it in fact is, as far as I have been able to tell, something I can back up with evidence and fact.” Ayda says, and Fig pulls back indignantly.

She whacks the back of her head on the wall behind her, but it’s worth it for the little smile she can see as she leans just a little away from Ayda.

Fig smiles back, and she believes it too. Or doesn’t need to.

from the prompt list linked here! (i’m closing prompts from this particular list because i have so many ones to get through already, but thanks!) 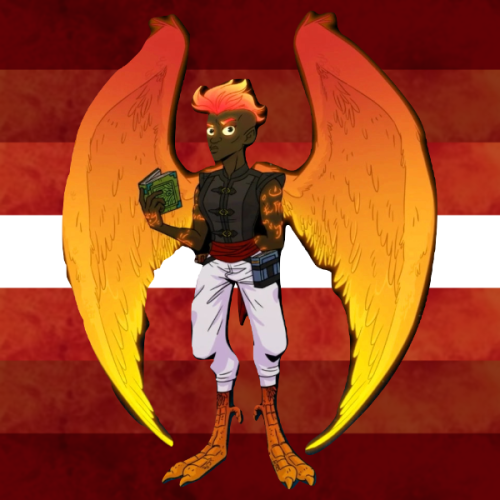 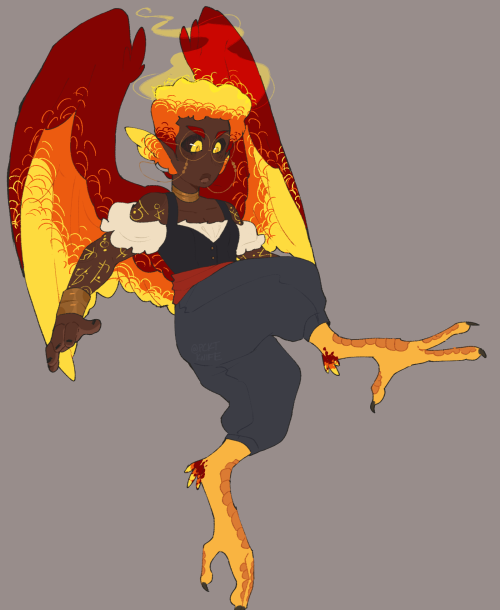 I’d like to thank brennan for making this image canon

*wants to draw more figayda but is too lazy to draw fig* Perfect…….. 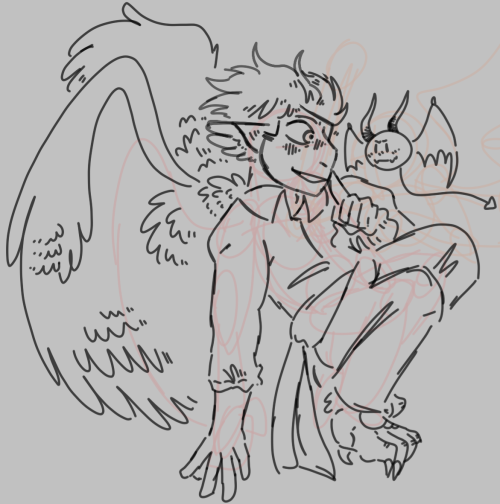 Im literally in love with you.

more than a little obsessed with her 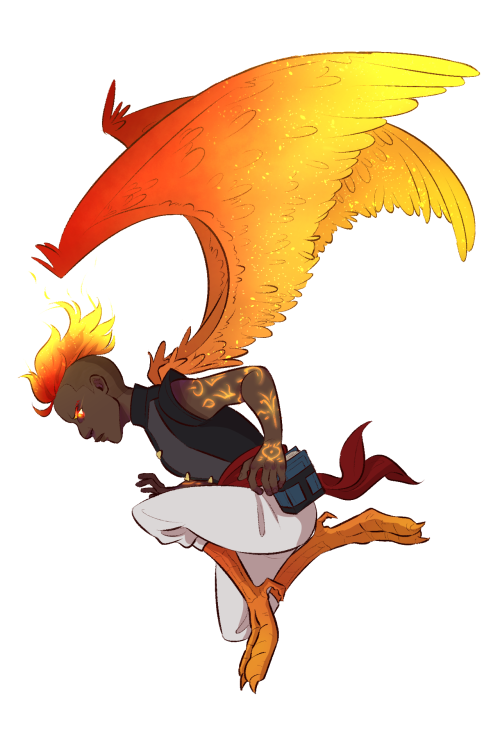 I have known Ayda Aguefort for a solid five minutes and I love her. 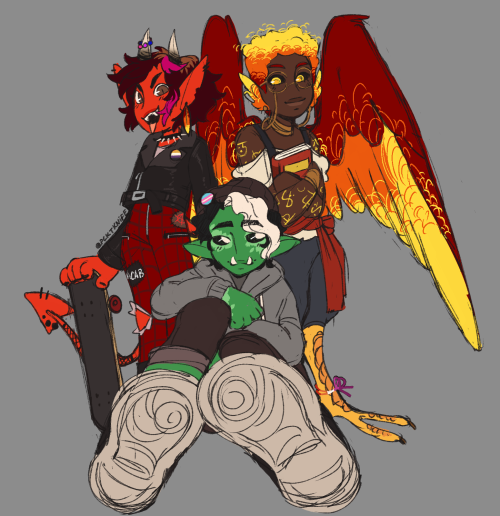 brennan i literally owe you my life 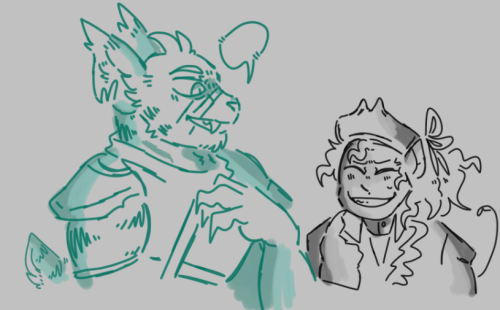 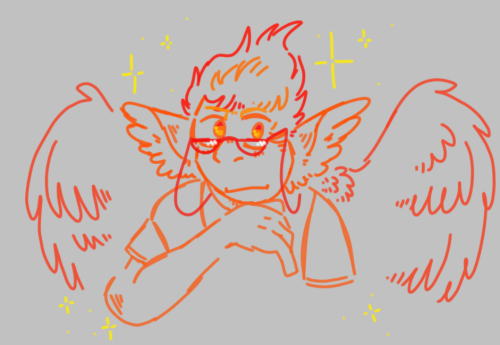 thank you dimension 20 for having an autistic character who is a 7 foot tall half phoenix pirate librarian wizard who cries fire and has a hot punk rock star girlfriend from the depths of hell. finally some good fucking representation.

#i joke but ayda is one of the few autistic characters i can actually relate to#most autistic character are straight white boys whose entire personality is being autistic lmao#entraptas a good one but i dont really relate to her#ayda is relatable as fuck tho#and it makes it even better that shes super badass#seeing a teenage autistic girl have a romance with another girl is. very important to me.#but also hehe bird girl go squawk#ayda aguefort#dimension 20#fantasy high#figayda
762 notes
ayda-obrien
Text

Her father just letting her go because he recorded the entire fight and put it on worldstar, so he thinks it’s fair

Three years after the Prompocalypse, the Bad Kids try to do prom right. Chaos ensues, promposals are made, and Fig struggles with the duality of being a badass and feeling excited about taking her girlfriend to a school dance.

Esther Sinclair copes with loss, a broken curse, a grudge, and a very hot kind-of-boyfriend. And crying. A lot of crying. 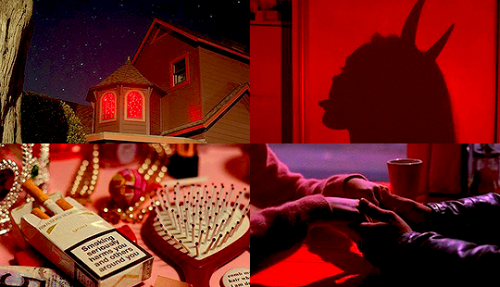 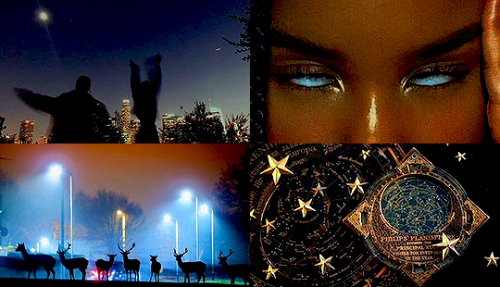 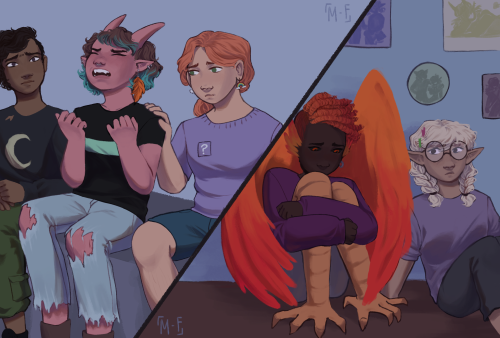 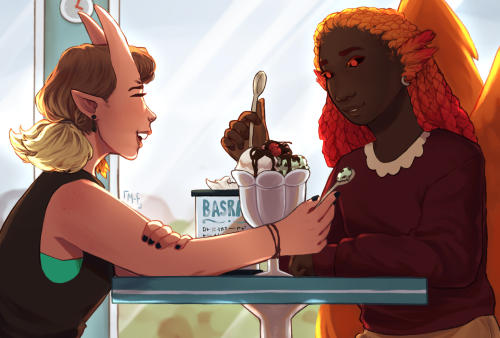 its finally here! im so stoked to finally share my @d20bigbang works from the last few months for @froglesbian ‘s fic “i didnt care (you were the most exciting thing i’d ever known)” :P hope you guys enjoy !!