This blog is completely cursed now

His suit is a sheer mystery for me

Damn Fizz looks like one of those freaking animatronic puppets

Wait why Octavia seems so young? Is this a flashback of her childhood? Also She looks scared! What if she used to be afraid of him when she was little??

I hope he doesn’t do anything bad to her

The most poetic side their relationship will be like Icarus flying out from his prison and toward the sun, but ascending to heaven on solar winds of hope in lieu of falling to his doom. Resting in the clouds beside something that he initially expected to be so unearthly and foreign, high and untouchable. But it’s distance from life was about as great as his tower was from the ground. And all it ever hoped for was someone who knew how to build wings, and spend her time with on ground.

On the other hand, a moth frantically and repeatedly colliding face first into a light bulb with extreme frustration and confusion will probably very accurately describe their day-to-day domestic friction :)

ironic by the name but.

this song reminds me of Husk and Angel.

#husker. 🥃, #angel dust.🕷️, #huskerdust.🕷️🥃, #on the radio.📻, #huskerdust, #angel dust, #husk hazbin hotel, #hazbin hotel, #sad lyrics i know but. i can just see husk grabbing a little guitar one night and angel is hearing the lyrics while lying in bed., #and he's just-- not crying but. He feels the same., #idk lol
0 notes · See All
dramokinText

“Create until there’s nothing else to create.”

I love her so much,,, she brings me so much joy.

2. For unreasonably serious takes on a generally cracky concept - “Poison” by Jayn/LittleJaneyCakes and “Begging to Bleed” by 8 Graves. Because the concept of the Egg Bois is pretty fucked up when you think about them too long. Which I did.

Say hello to my only other fandom, Hazbin Hotel!

The character in question is from the fic The Masked Man’s Puppet Show, and this is the main character.

“Check The Mirror.
Are You Still You?”

“Finnegan F. Swan, The Missouri Massacirist, a killer whose age is unknown. He had killed exactly 1440 men and women over the period of 1949 to 1982. Every single one of his kills were cut up and put back together, held up by steel beams and metal wires, posed to represent different famous paintings and / or tales.

Lucifer Morningstar’s fall into hell, Cinderella’s stepsisters’ feet being burnt to a crisp whilst dancing on hot coals, the execution of the French royal families during the French revolution. And many others.

All of them were found in a small wooded area in between Missouri and Arkansas, right along the two states border. Every single victim was confirmed to have been monsters themselves. Rapists, murderers, and the general scum of the earth.

His last recorded kill was his 1440th kill, and the victim was Henry Ragno, a American Italian mob boss who had done deals with drugs, human trafficking, and an unprecedented amount of murderers.

After his death, Swan killed himself via self-immolation. It is not known why he did this.

-A small college blurb on infamous murderers in Missouri history.

Fun fact, I know how to draw and color.

Fun fact, just because I know, does not mean I can. 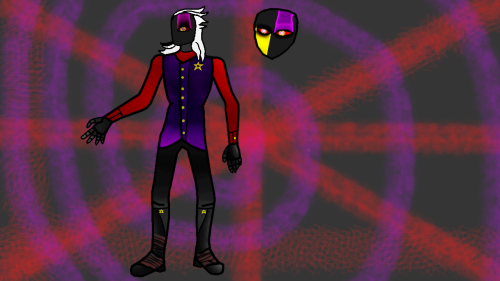 I have far too many songs for this man (besides the obvious ones).

I’ll go with “To My Enemies” by Saint Motel and “Fear and Delight” by The Correspondents. I’m not really sure why these songs gives me such Alastor vibes, because I have many others that logically fit much better, but they do.

Here we go characters I kin

.Dean (SpN this one hurts now)

.Wort (over the garden wall)

.Gregg( night in the woods)

.Dr Habit (Smile for Me)

Im bored so send me assumptions about me based of this list.