trans xie lian for the soul
note: he is binding with sarashi, not bandages! dont bind with bandages 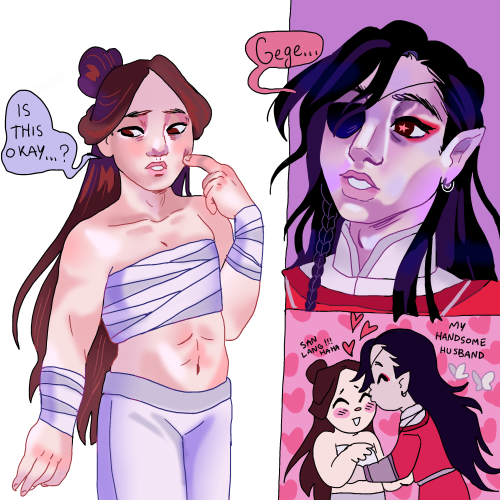 Xie Lian: Being so pretty all the time must be tiring.

Hua Cheng [without missing a beat]: Then you must be exhausted.

Couldn’t decide whether I liked Feng Xin’s manhua or donghua design best so I kinda drew both ?

Hello my little rainedrops! How are all of you doing today? It’s another wednesday my dudes! You know what that means! I’ll be streaming Hob today at 2pm PST! Hope to see all of you droplets there!

Haha yes I love thinking about XianLe trio in general! 🥺 As for Hua Cheng almost finding Xie Lian – that was confirmed in an interview with MXTX.

Tumblr user uoongs did a wonderful translation of all the TGCF-related questions specifically, and you can read that HERE. The question/answer #17 is the one you want! The short of it is that Xie Lian’s crap luck prevented him from running into Hua Cheng, as that would have been indeed the luckiest thing ever for him! ;o; And it wasn’t until it was inevitable (i.e. his ascension) that Hua Cheng was able to get his actual location and go to help him! 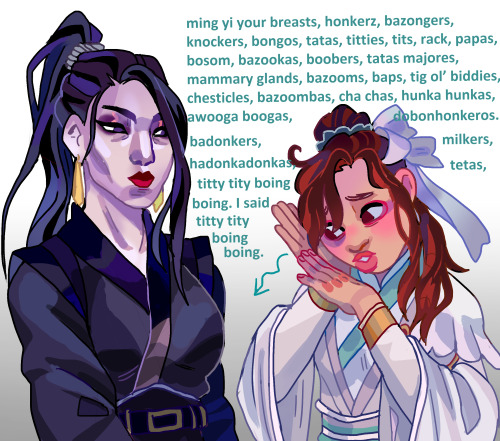 I miss book 1 man. Where’s all the cute, fun stuff? Where’s Hua Cheung being annoying to Mu Qing and Feng Xen? Where’s the idiot trio being idiots and not discussing something important? Where are my super cute and romantic hualian moments?? I DID NOT SIGN UP FOR THIS

“You can’t save everyone.”

Xie Lian slowly straightened up. “Whether I can, I won’t know until I’ve tried. Even if the heavens say I must die, if that sword doesn’t pierce my heart and nail me dead to the ground, then I am still alive, and ‘til my last breath I will struggle to the end!”

That is some very dreaduk foreshadowing i sense….

Next to him, Qi Rong cussed.

“Rubbish! Do you know who cousin Crown Prince is? He’s a god of heaven! If he’s not right, what, you think you trecherous dogs are in the right?!”

Those things crawled and emitted a thick, glue-like body fluid, and So Rong was crying at how disgusting they were. He stomped on the head of one that looked weak and noticed that creature wasn’t exactly scary.

He said dejectedly. “So they’re not that impressive?”

And that’s it for now! Haha…I’m gonna finish book 2 tomm and UGH I cant WAIT to get back to the calmer present tbh

Xie Lian, holding a python: Guys I impulsively bought a snake, what do I name him

Mu Qing: You did WHAT–

Mu Qing: Feng Xin and I have the kind of easy chemistry where we finish each other’s-

Cursed thought that won’t leave my head till y’all see it too:

Xie Lian owns the Four Seasons Landscaping (and is confused).

Qi Rong owns the crematory (and is a gremlin).

Thanks for coming to my Ted Talk. 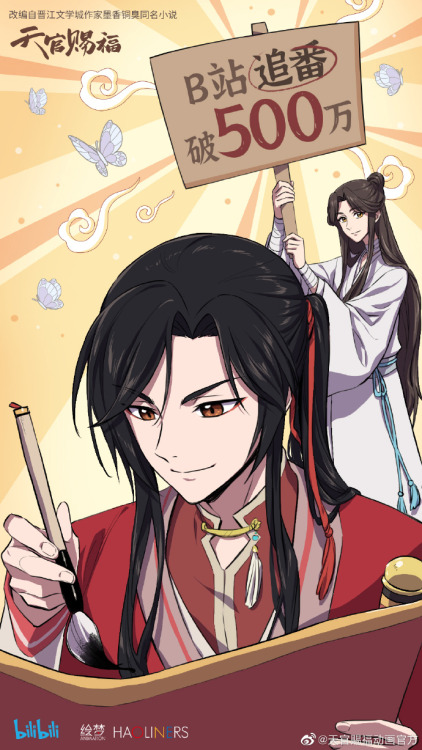 Xie Lian, Mu Qing and Feng Xin all collectively share one braincell among themselves. And that braincell is passed between Mu Qing and Xie Lian occasionally. But Mu Qing is the one that uses it the most.

At this point I’m fairly certain that Mu Qing is the voice of reason amongst this chaotic trio. You would think that it’s Xie Lian but nope. It’s definitely Mu Qing.

Hua Cheng: Can you ever just stfu?!

He Xuan: What did they do?

He Xuan: They stay doing some annoying shit.