I'm ace and I like the ship. that's pretty much it.

We looked inside some of the posts by ace-wangxian and here's what we found interesting.

#honestly I'm apalled, #i should have done that ages ago, #better get started once work is over I guess, #outdated memes are the way I communicate, #sorry not sorry
0 notes · See All
ace-wangxian·7 days agoVideo

#this is so cute, #now I need to see something with wwx taking up farming and lwj's rabbits helping him
28K notes · See All
ace-wangxian·7 days agoText

I think the most consistently fun way to do mdzs modern AUs is to wildly diversify WHY everyone is in the present. Like, some people got reincarnated, some people cultivated to immortality, some people are actually modern, somebody fell on a time travel array, somebody’s just a god now. I cannot think of any wangxian fish out of water meet cute premise where one of them is from the modern day and the other has been suddenly transported from ancient wizard times that would not be improved by interrupting the plot to run into Jiang Cheng, who has simply been alive the entire time, at the grocery store.

the juniors all cultivated to immortality, because they’re obviously the only ones with, like, empathy and common sense (ish) and good mental health, and now their parents are being reincarnated and it’s a whole mess

Premise where a normal fic plot is happening but it’s only going smoothly because the junior squad are on its B side furiously putting out political fires and thwarting attempted assassinations. The romantic leads do not notice.

Sizhui smiling benignly as he forces down the wrist of a minor clan member with a spiritually charged machine gun: Sir that is my infant father and it would be rude of you to ruin his day.

random malcontent: …Are you trying to say baby daddy?

Sizhui: I am ABSOLUTELY NOT Jingyi was right I should have let him take this one

Jin Ling, in the sprawling manor house/old dog sanctuary on the tallest mountain of the small island nation that he more or less owns, because Jins know how to invest: I’m not complaining. I’m just saying, you guys have all found at least one or two close relatives - Jingyi’s parents were around last century, Zizhen’s third little sister has reincarnated twice, Sizhui’s got Wei Wuxian and La Wangji at the same time, making stupid eyes at each other from across the high school classroom! - but I never even got to meet my parents the first time, and now they keep not being born!

Jin Ling: Baoshan is, like, four centuries older than we are; why do you still think she knows everything

Jingyi: Because she definitely does?

Zizhen: I believe it. It’s the universe’s way of being kind to immortals.

Sizhui: Wei Wuxian is your uncle, too - you’re welcome to drop by the school some day and see him. I’ll sign you in.

Jin Ling: Ugh, fly to San Francisco just to watch him and Lan Wangji stare at each other? Pass.

Jingyi: Well don’t just mope about it. You’re insufferable when you mope. Remember the 1500s?

Jin Ling: *sits up straighter, eliciting a small mutter from the napping dog he’s definitely been petting this whole time* Oh I was the one “moping” in the 1500s - what about you, after that woman -

[from outside: the stopping-skid of a dirt bike; a teenage voice shouting, “I’m here, Mr. Jin! You need to fix the fucking path; that tree root nearly killed me again! I’m going to go feed the dogs!”

“The gardeners clipped everything last week, you brat!” Jin Ling hollers back in the direction of the window, without missing a beat. “Try watching where you’re going! And don’t miss Luffy, she’s been hiding by the pond again!”

“Duh!” the teenage girl shouts back, more distant with the sound of feet running around the house.]

Jin Ling: *leaning back again* Oh, just the kid who comes up a couple times a week to yell at me for no reason and pet all the dogs while pretending to do work. I pay her or something.

Jin Ling: …no. No, absoLUTELY not!

Zizhen, the only one of them who’s really dedicated time to honing the ability to examine and recognize living souls: *wanders over to the window and peers out at the girl now lifting an elderly malamute in her arms and nuzzling its belly* Yeah that is 100% your jiujiu.

#did sizhui get a job inconspicuously teaching math in his reincarnated dads’ high school so he can keep an eye on them? MAYBE  #does he feel a little bad in a stalker way? SURE  #but he’s doing it anyway!! [wei ying] is still very add and [lan zhan] is still very quietly autistic and they’re good kids brent and he  #loves them! and also all his other students! he totally teaches band too! #ironically neither of them is in band!  #he likes it anyway!

#meanwhile [wen qing] is in like her…mid 20s to late 30s and a leader in some notable protest movement  #and wen ning maybe impulsively dropped out of heaven to save her life and then had to pretend to be a normal modern human  #instead of some sort of undead god of abandoned and forgotten things  #and now they’re playing out every single beat of a ‘the old love of an immortal gets reincarnated and now they’re gonna fall in love again’  #plot - but like. she’s his beloved older sister.

#mdzs, #mo dao su zhi, #wangxian, #the juniors, #this entire premise is so funny and I love it, #the replies are gold
3K notes · See All
ace-wangxian·7 days agoPhoto

A double post today because I painted these to go together.

Please see the pinned post at the top of my Tumblr for my links if you’d like to help support me in saving for a safe place to live! 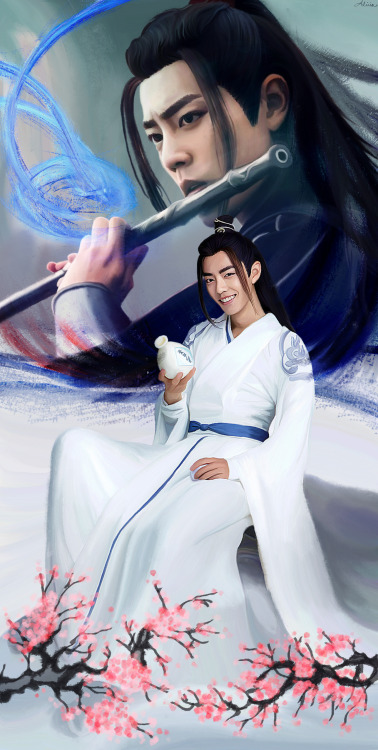 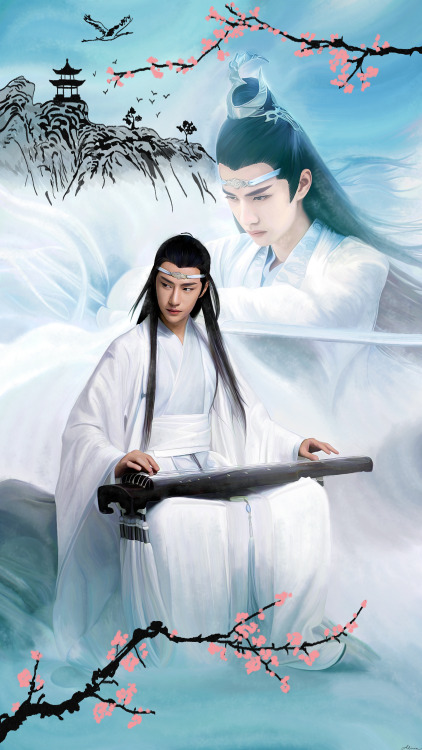 I literally can’t get over this song.

#video, #music, #okay but this gives me major wwx feelings and his relationships with different people throughout the series, #like this song went off, #Youtube
0 notes · See All
ace-wangxian·8 days agoPhoto

From one good thing by Yuu_chi :’) 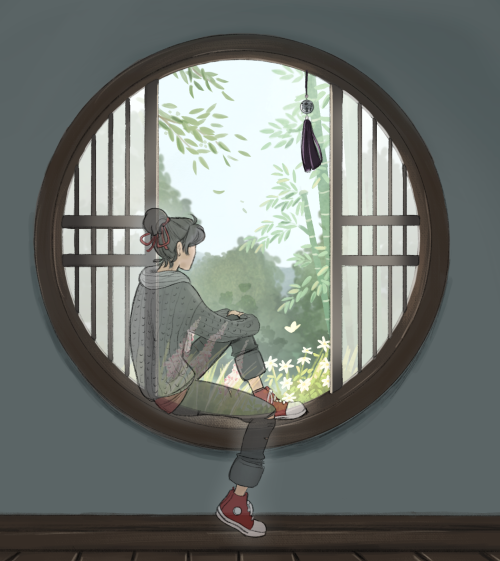 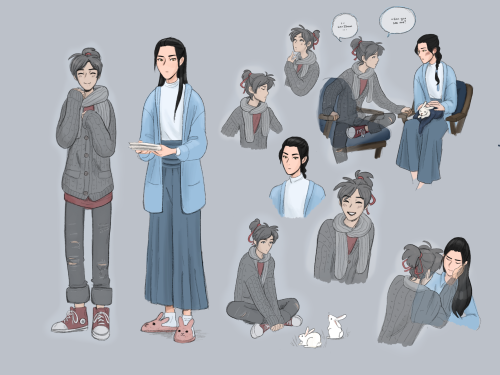 #wangxian, #fic rec, #mo dao su zhi, #mdzs, #lan wangji, #wei wuxian, #OH, #i read this fic and I LOVED it, #this, #fanart, #is amazing and I really like their modern designs, #god though the fic was so good
1K notes · See All
ace-wangxian·14 days agoText

Well, me wanting to make MBJ a normal human and SQH into the Special One of the AU resulted in the Reverse Dragon AU which is also a Modern AU…

SQH is a tiny danger noodle and MBJ, in true millenial fashion, has sO MNAY ANXIETY ATTACKS DUE TO THIS NEW TALKING LIZARD. 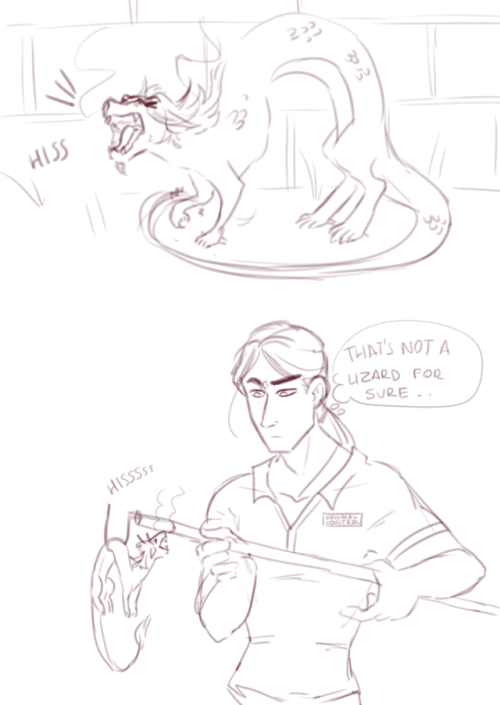 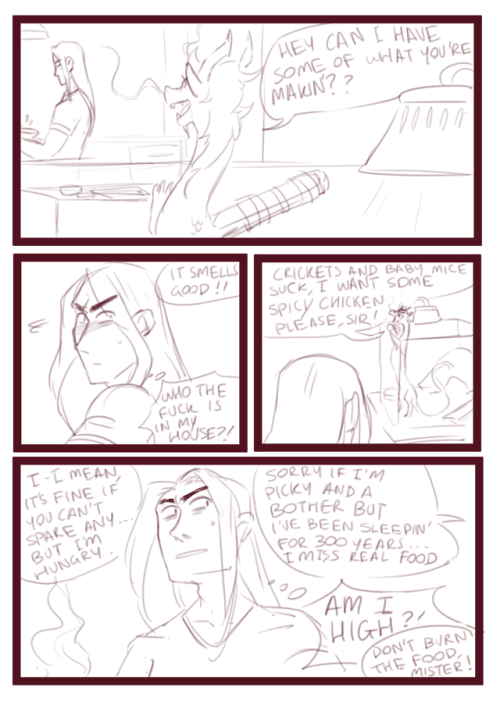 #Moshang, #Dragon AU, #Scum Villain, #svsss, #mobei jun, #shang qinghua, #op this is so funny, #mobei jun wondering if he's high is so funny to me for some reason, #i haven't laughed this hard in ages
699 notes · See All
ace-wangxian·19 days agoPhoto

the untamed/nezha crossover for fun :P 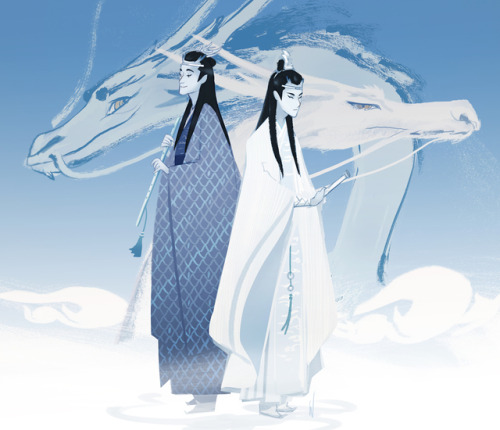 #svsss, #mdzs, #tgcf, #lan wangji, #hua cheng, #lou binghe, #mxtx, #this looks so nice, #i love it, #from what I've heard of hua cheng and from what i know of luo binghe and lan wangji, #i really doubt they would willingly touch each other, #these men are feral, #some more than others
1K notes · See All
ace-wangxian·19 days agoText

Novel Wei Wuxian is the densest object on the periodic table

here’s a sketch of both Lan Qiren and Qingheng-jun as I’ve imagined them when they were younger!

i like the idea that LQR was a put-out, spoiled kid before his brother’s seclusion kind of hit him in the face.

#Qingheng-jun, #Lan Qiren, #mo dao zu shi, #mdzs, #oh my god, #THESE ARE SO GOOD, #i have feelings and thoughts™ about these two, #like how closely do lwj and lxc resemble them? or their past relationship, #did lan qiren ever resent his brother like he did madame lan?, #i feel like I need to read the novel to get a better aspect
295 notes · See All
ace-wangxian·19 days agoText

Listen, is The Untamed an incredibly moving story of soulmates overcoming all odds including death?  Yes.  But never forget that Lan Wangji fell in love like a cat being forced into a bath, hissing with futile repressed rage the entire time.  And that’s beautiful.

#lan wangji, #wei wuxian, #wangxian, #the mental image this invokes is so funny, #lwj being incredibly mad about falling in love is so funny, #hell I think he even gets mad about making friends, #he's such a bitch and i love him, #cql lwj is one of my favorites, #the lantern scene when wwx tells lwj that he's smiling and lwj immediately pulls out Bichen, #👌iconic
5K notes · See All
ace-wangxian·19 days agoText

do you love fics where wei wuxian and lan wangji parent the crap out of lan sizhui? do you want to read accidental baby acquisition fics until your eyes bleed? would you die as your heart slowly turns to mush from the softness of this family? bitch the fuck, me too. here are some of my personal favourite fics of wangxian ft their turnip son a-yuan. its a range of canon divergence, post canon, thirteen years of inquiry, raising a-yuan at the burial mounds au etc - there’ll be something for literally everyone. enjoy!

I almost feel guilty just asking, but do you or anyone of your followers know a story that has Lan Wangji loose or give up his golden core? 😬

Hmm, there’s this (very excellent but unfinished) one:

Summary: Twenty years after Wei Ying’s death, Lan WangJi has lost all hope of ever seeing him again.

Under pressure from the elders of his clan to marry a female cultivator he barely knows, he flees to the Burial Mounds where he finds a long lost goddess of demonic cultivation. Surprisingly benevolent, she offers him a chance to reunite with Wei Ying, but it will cost him his golden core…among other things.

When Lan WangJi concedes and is thrown into the past, he finds life more complicated than ever. After all, how can he protect Wei Wuxian when he is powerless himself?

Does anyone know of any others?

I have so many things to reblog and I’m literally just procrastinating.

#both in this account and my naruto one, #ugh, #mine, #i literally like a post and send it to myself, #I have over 200 messages for myself to reblog, #I'm in the middle of work but I'm practically done anyways, #AAAHHHH
0 notes · See All
ace-wangxian·25 days agoPhoto

thought: Zixuan has so many kids to Dad, he sometimes unwittingly forgets to turn off Dad Mode and casually Dads people who are not his kids. pretty much every other dad in the previous generation is incredibly shitty so actually it works surprisingly well. 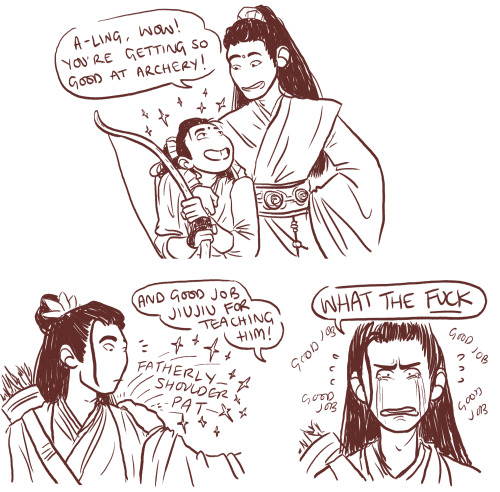 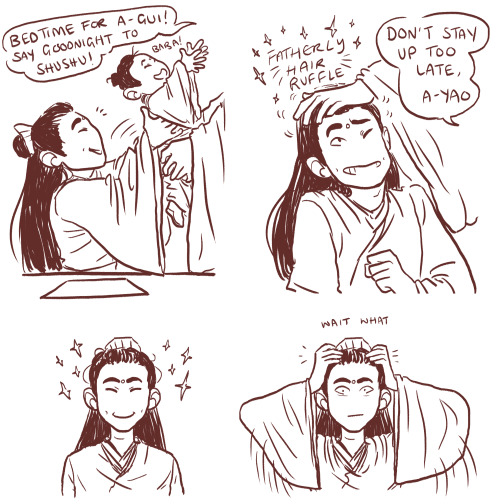 #Jin Zixuan, #Jin Ling, #jin guangyao, #sect leader yao, #the untamed, #jiang cheng, #op this is such a CONCEPT, #i love it, #jin zixuan accidentally acting like a dad to other people would be so funny and incredibly sad
4K notes · See All
ace-wangxian·a month agoPhoto

Always on his mind…

Please see the pinned post at the top of my Tumblr for my links if you’d like to help support me in saving for a safe place to live! 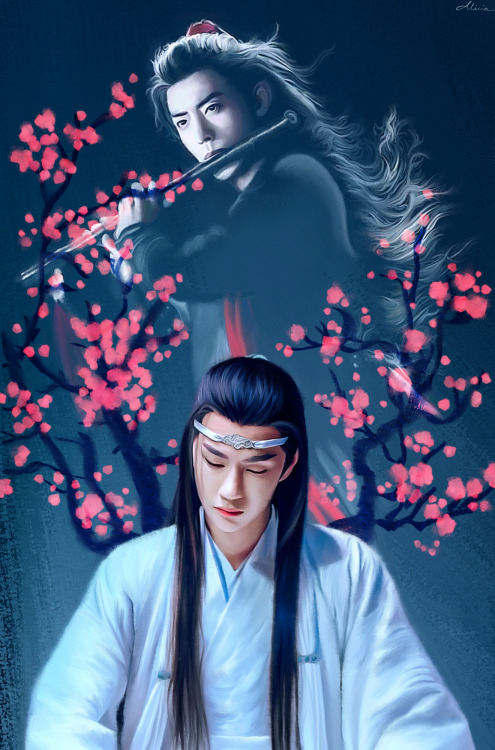