That’s a very good point. At times MDZS seems to raise the question of “at what point does someone become complicit in atrocities”; it comes up with the Wen remnants, who didn’t side with WRH but never tried to stop him (because they didn’t have the power). At that point the sects, JC included, decide that doing nothing when you could have attempted to do something, even if you were guaranteed to fail and die horribly without achieving anything, you’re complicit. Going by that logic, JC is complicit in WC’s decision to murder MM; he does nothing. Worse, he actively prevents others from doing something. Meanwhile the other major sect heirs present (with the possible exception of NHS, but I don’t think he’s mentioned once during the Xuanwu section of the indoctrination camp so possibly he managed to get out of it somehow? I think CQL had him Dramatically Fainting at some point before, which might have been how he did it) immediately step forward to defend this nobody daughter of servants at great risk to themselves because it’s the thing to do. That scene kind of shows that even back then JC was short-sighted and selfish; he would have let her die even after WC made it clear he was willing and ready to kill everyone there for any perceived disobedience because he didn’t want to take a risk, even though the risk had kind of already been taken before anyone actively disobeyed. Even if WC hadn’t decided to kill them all for causing problems, they didn’t stand a chance against the Xuanwu with the tools he’d provided them. WWX and LWJ had to scavenge from weapons the Wens left behind when they fled, and even then to kill it they had to hide out and wait until it fell asleep so they could set up a trap, which WC would never have given the disciples time to do. MM aside, the only way out of that cave was to fight the Wens, and yet even when the chips were down JC forced his sect, a good-sized chunk of the disciples’ fighting force, to stay out of it until combat actually started. It really is a good display of who he is as a person.

Wei Wuxian laughs his head off, looking at Lan Sizhui’s red face and wide-eyed embarrassment. “You did, you did,” he manages between hiccuping giggles. “Before Wen Qing managed to get it into your head that it’s rude, and you should call him Gege, it was all, ‘DieDie, DieDie’. It was adorable!”

Also a bit annoying, but Wei Wuxian keeps that bit to himself. 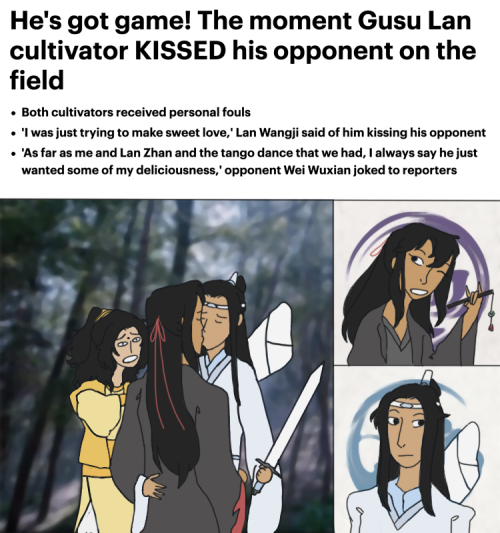 Lan Wangji, the underboss of a triad group run by his elder brother, is given an undercover mission to get close to and murder Wei Wuxian, the man accused of killing his Father and his Uncle. Wei Wuxian, the boss of a triad group and a detective in Yunmeng is told that Lan Wangji, the underboss of the triad group that rivals his, is coming to kill him. Wei Wuxian is quite intrigued and when Lan Wangji becomes his partner detective, he decides to play along and mess around with Lan Wangji to see how far this can go.

Well, Idk, the saddest thing in my opinion in that story was the fact that he was really in love with him and even with the fact that they lived happily together, he still couldn’t help, but made him kill people, cause he liked doing that to him too (he was too pure and he loved seeing him unknowingly kill innocent ppl with his own hands), cause he simply couldn’t live without it, since he’s mentally ill. Like he truly loved him and he was still doing that. And he also realized that he cannot live without him only when he lost him forever.

Back to our previous discussion, if you know the spoilers already, then I can say stuff on that matter too haha. The main reason why I’m not into the Meng Yao/Lan Xichen thing is because for Meng Yao he was never his main priority, power was. Like with Xue Yang it’s pretty clear that even in a very sick way, but his whole world was still revolving around Xiao Xingchen, it was all about him. But for Meng Yao power was his world/goal and he never put Lan Xichen above it. Not to mention that he got married and had a child with ****. Haha and that’s just not what I’m looking for into an OTP.

Which is why I felt really sad for Lan Xichen, cause he was looking at Wangxian and was like “I…I have this too” and Lan Wangji was like “Sorry, bro, but you don’t” xD So it was looking very sad, especially when he tried to compare it and realized just how pathetic it looked in comparation.

And even tho I think Xichen’s feelings were stronger, than Meng Yao’s, he at most times still was literally going “I’m Switzerland”. Like he’d never go against the whole world and set everyone’s asses on fire, like Lan Wangji did for his boo. And that’s why it’s just a “meh” for me, you know?

My point is I don’t have any rules for ships in fiction (like I do not believe that love is perfect, nor do I believe that fiction and reality are same and I’m not looking for the “we have sex at 5pm on mondays and finish each other sentences” ships like many ppl do), and I do not mind going with some dark (to say) otps, if I see that they’re it for each other. I like that “you’re the one for me” in fiction in all kind of ways, from the healthiest to the sickest, I still can’t help but enjoy it haha, but if they’re truly each others one and only. Which from Meng Yao I didn’t feel at all, he loved his power much more and did everything for it.

I can go behind stuff like, you know, when Korn almost beat to death a dude who broke Knock’s leg, I was like “well, shouldn’t have touched his boyfriend” lol I don’t mind this kind of obsesssion in fiction, so if Meng Yao did everything for Xichen or like.. to get his attention or smth, or killed for him, I’d probably be like “yeah, okay”, but sadly he did it all for other things haha

Probably the events immediately prior to his death did have at least some impact on his perception of JC, too; I doubt it was a secret that JC was planning to head the attack on the Burial Mounds, so probably WWX was at least aware of it, even if he wasn’t capable of really understanding what that meant until after his resurrection. And of course his first meeting with JC post-resurrection involves JC being a dick to JL and trying to kill WWX based on him knocking JL over in self defence. It’s no wonder that that combined with the sense of separation that comes from being dead for thirteen years leads WWX to decide he’s done with JC; WWX managed to grow more as a person while dead than JC did while alive in the same period. After everything WWX’s been through, pandering to JC’s temper probably just doesn’t seem worth the effort it would take.

Lan Wangji, the underboss of a triad group run by his elder brother, is given an undercover mission to get close to and murder Wei Wuxian, the man accused of killing his Father and his Uncle. Wei Wuxian, the boss of a triad group and a detective in Yunmeng is told that Lan Wangji, the underboss of the triad group that rivals his, is coming to kill him. Wei Wuxian is quite intrigued and when Lan Wangji becomes his partner detective, he decides to play along and mess around with Lan Wangji to see how far this can go.

just a cute modern mxy i drew for a friend man aaron really does have some sexy and good wwx opinions…

#im not gonna start up the shit from last night again. this post is about wwx and wwx only., #mine, #mdzs
0 notes · See All
cosmicsaltlordPhoto

Wen Ning icon commission i did for a friend <3 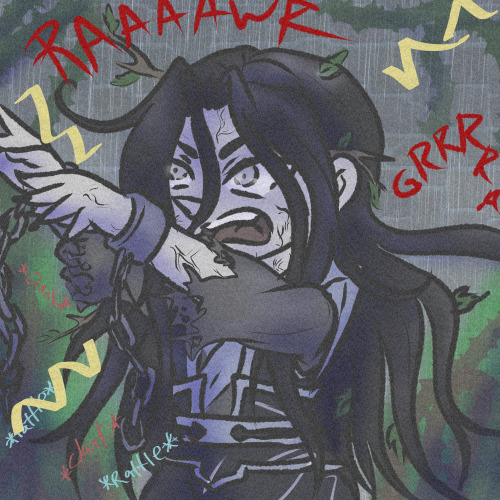 “Sometimes,” Wei Wuxian said, when it’s late at night and they’re really drunk and he’s been whining up a storm over nonsense to the point that even Nie Huaisang, master of whining, asked him why, “sometimes it’s just - when I’m feeling really spoiled, I go back to being, y’know, like a little kid. Five, or three.”

“You do?” he asked, jaw dropping open into what he knew was an unseemly sort of gaping motion, like a fish, but in his defense – “I’ve never met anyone else who does that!”

So I had some reservations about buying from AliExpress (and it still feels a bit risky to me tbh) but after receiving this figure (which I hadn’t even known existed until seeing it on there) I must say I have no regrets, other than that there’s no LWJ to keep him company. He is beautiful. 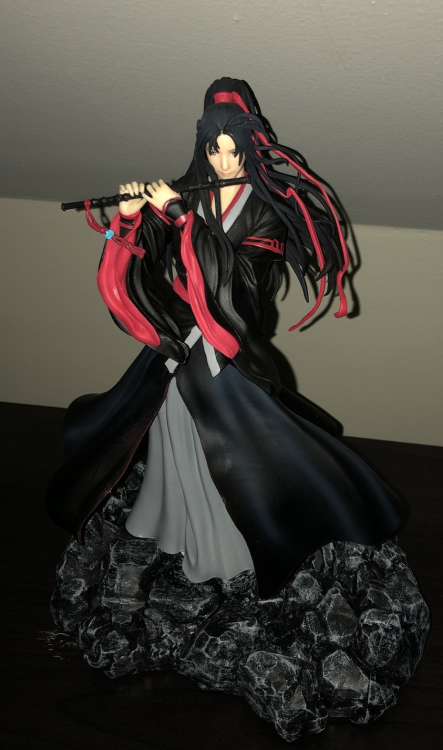 #wherein i brag about stuff i bought, #MDZS, #CQL, #WWX, #PVC figure, #I love him he is beautiful, #I hope they release a LWJ figure otherwise he will be lonely :(, #maybe i should get some bunnies or something to keep him company, #they put so much packaging on him and so many boxes, #within boxes, #obviously they know how banged up the package would get in transit
3 notes · See All
redxblueihateloveyouVideo

“now every piece of my heart is falling back into place”

I know I’ve vidded them a lot already, but I’ve been at it again with rereading and rewatching and I just wanted to try things and play with the audio drama and moments from the novel hehe but I hope you’ll like it anyways :)

I still cry everytime I reread the aftermath of the bath scene, it’s so stupid lol “all men do that, Lan Zhan” shut up, Wei Ying, shut up, shut up xD

‘cause anywhere with you feels right