Pinoko, at the grocery store: Alright Doc, remember. We’re just here for those peanut butter granola bars that you know I love. We’re just gonna be here for 5 minutes, in and out. Alright?

Pinoko: Actually, you know what? Change of plan! I need you to go around the store and buy every roll of toilet paper you can find! Okay?!

Black Jack: But, Pinoko, isn’t that really counterproductive and does more harm than good?

(Please remember to wash your hands)

Pinoko, dreaming: But, Your Honor, how could I have robbed that bank if I was already wearing the prison jumpsuit?  It just doesn’t make any–

Pinoko: Someday I wanna finish that dream so I can find out if I’m guilty or not. 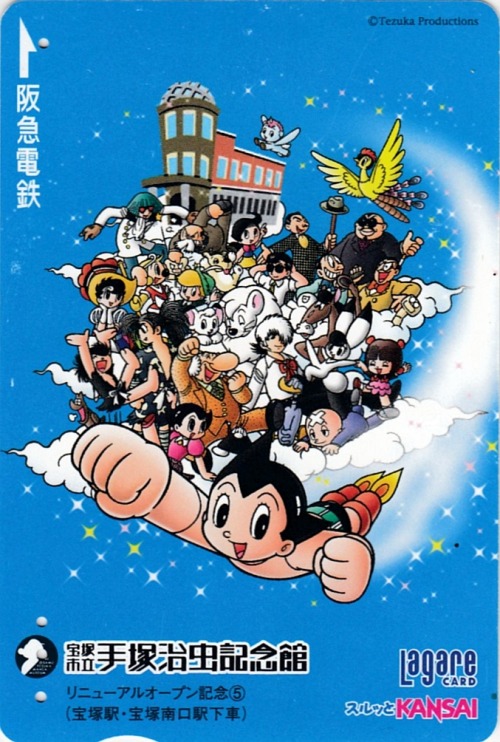 I think Kuro would totally tell her a dad joke, something as:

“Keyrah, give Largo it’s collar back” 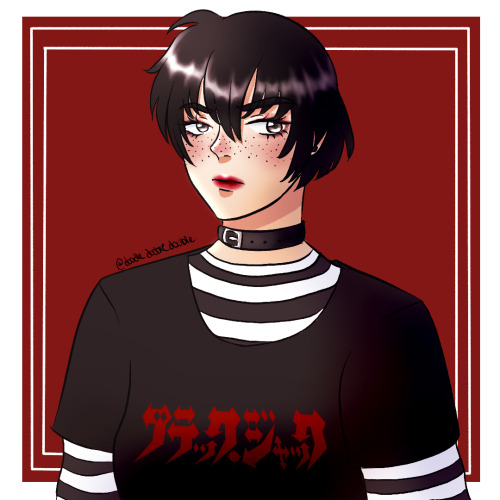 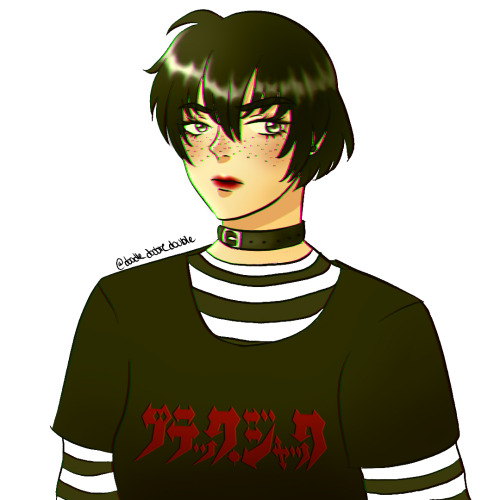 Wato: Why is your report card on the ceiling?!

Sharaku: You said I should bring my grades up.

Wato: I did say that lemme see-

Black Jack: (*sees someone doing something stupid*) Oh God, what an idiot. 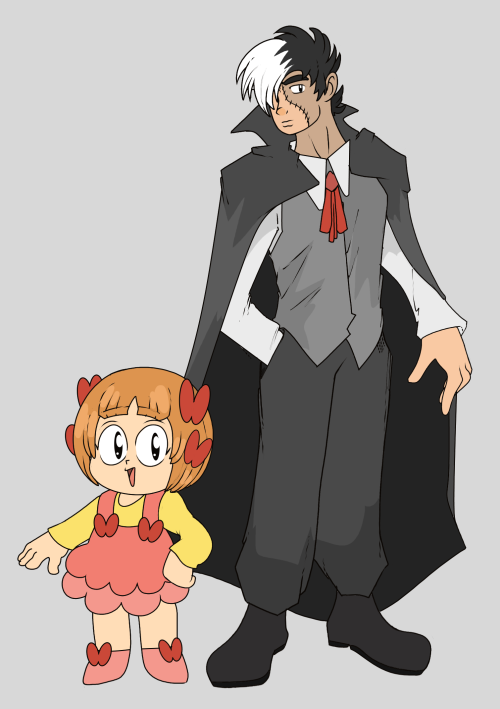 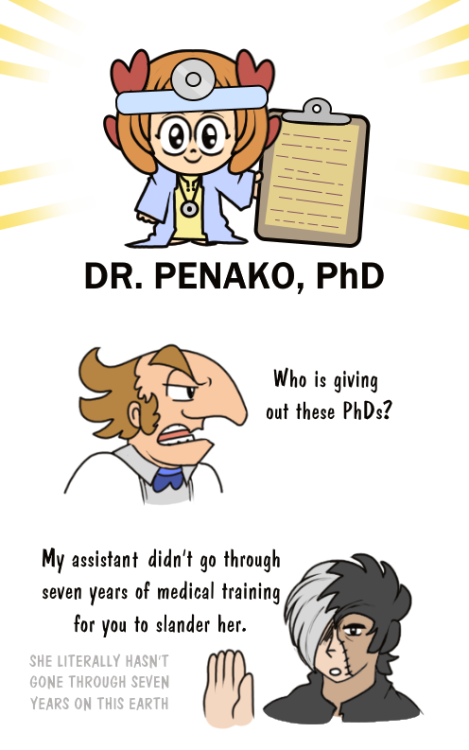 PInoko The FUCK is your problem?!

Pinoko, putting the disc in the DVD player: I thought we were friends.

Pinoko, watching clouds roll by: That one looks like Mickey.

Pinoko: And that one looks like a Cease & Desist. 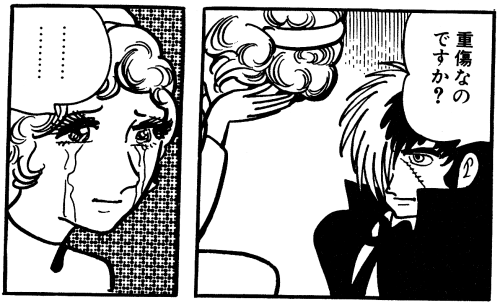 Kei: You want me to go get a ladder?

Black Jack: We don’t have one.

Black Jack: You know, studies show that keeping a ladder inside the house is more dangerous than a loaded gun.

Black Jack: That’s why I own ten guns: in case some maniac tries to sneak in a ladder.

Sharaku: Pinoko, listen carefully now. Do NOT eat that dirt!

Pinoko: (*looks at the dirt nervously*)

old ass no ref finger doodle from a while ago that still looks p cute!!

I almost screamed when I saw this at the secondhand hobby store. Cannot believe he was just vibing there, in a bin. He even has his little scalpel!

The hype is so real. I found this along with some volumes of Midnight at the resale bookstore, “Book Off”. I’m excited to share scans because I’ve never seen some of the illustrations before and I’ve been collecting for years.

(*Cha Cha Slide plays in the background, and funky disco lights swirl around the room*)

Black Jack: (*lays on the floor without moving*)

Since you didn’t specify whether you meant manga, OVA or anime, I will try to encompass what I’m familiar with, aka manga and OVA.

~*Another one based on a Tezuka movie, this time “Marine Express”, a personal fave of mine. There’s even a manga version that was written later, and it’s the reason I refer to Black Jack exclusively as “BJ” in the fic. They don’t (as far as I can remember) ever call him by name in the movie, and in the manga they call him BJ, and I kinda love it. Also neither the movie nor the manga answered my burning question of ‘DOES PINOKO THINK DOC DIED W/THE MARINE EXPRESS?? IS SHE GONNA HAVE A HEART ATTACK WHEN HE COMES BACK? So I started this fic to cope. Not sure how or when I’ll end it XD*~

Shunsaku Ban fished through his various coat pockets, cursing as his search for coins came up with only lint and soggy bills. It was a relief he hadn’t drowned at sea like everyone had originally thought, pulled into the depths of the Japanese trench along with the wreck of the Marine Express and its doomed crew, but still he’d managed to wake up on the beach with the waves soaking his jacket. After tearing away a smudged and useless wad of paper from atop his checkbook, there’d been just enough undamaged sheets left to pay for a plane ticket back home, but the merciless payphone before him demanded cold metal coins. And between undersea fights with supercomputers and ancient civil wars, anything that might’ve taken up home in his pockets was long gone.

Glaring around the empty floor of the phonebooth, Detective Ban wondered for a moment if this fool’s errand was really worth it or not. It was that Doctor’s own fault, following him all the way to the coast just to collect a fee! Of course, they wouldn’t have survived if he hadn’t returned Professor Nosenkopf from the brink of death like he did, and there were all those people he stayed behind to help too…. Shunsaku Ban shook his mustache and pulled the receiver from the machine. No, he owed it to BJ to carry out his promise. Besides, the thought of that little red-haired girl and how she must be suffering to think the Doctor had died was enough to get him to act.

The operator’s voice came on loud and clear, and the Detective said quickly “I need to place a collect call, quickly please.” Such a doctor should be able to cover the cost, he reasoned. He just hoped it wouldn’t be added to his already horrendous medical bill. Relaying the number from memory, Shunsaku Ban waited anxiously as the phone rang and rang… and rang… and continued to ring. He drummed his fingers around the receiver, hoping he’d gotten the number right, that the girl would accept the collect charge, that she even knew how to answer the phone in the first place (she’d seemed so young after all), and finally - there was a click as someone on the other end picked up.

Taken aback, it took Detective Ban a moment to realize he had reached the Doctor’s clinic. And the desperation in the girl’s voice made him glad he’d gone to all this trouble.

“No, uh, this isn’t the Doctor;” there was a choked sob on the other end, and the detective continued quickly “This is Shunsaku Ban. I was with the doctor! He - BJ, he’s alright. I mean, I have a message from him. That is - he wanted me to check in on you.”