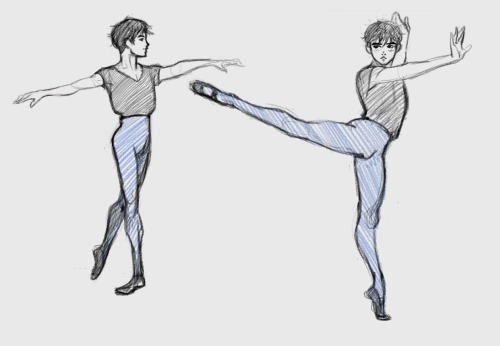 #my last upload was September 2018 whoops, #*waves* while walking back into the void, #yuri on ice, #yoi, #yuuri katsuki, #yuri katsuki
154 notes · See All
jimin-is-a-sunshineText

if you have to stay home because of the world coronavirus situation, and are looking for fics to read, these are some of my favorite fics.

The silver medal was hard fought and won, but now the stakes are higher than ever. Five gold medals loom on the horizon, but more importantly, the “life and love” within the gold rings. Yuri and Viktor’s relationship grows as they get back on the competition road, and new complications rise with them. (Proper follow-up to the TV series; not AU, no crack ships, no weird shit.)

The skating season continues (as skating seasons are wont to do), while Victor and Yuuri negotiate the shifts in their relationship, their careers, and their home rink. Sometimes, things even go as planned.

This is a story that runs during the main canon of Yuri!!! On Ice, from episode four and beyond until a month after Worlds. Primarily though, this is a story about sex, dating, love, and marriage—yes, in that order.

Follow Yuuri and Viktor as they go through competitions, starting from Viktor’s comeback to the end of the Olympic season.

From the Cup of China to the Worlds the following season and the unexpected departure from Russia; two young men discover their feelings. Eighteen months of love and laughter, fear and worry… gains and losses.

The set of Yuuri’s mouth softened into a private smile as Victor squeezed his knee beneath the table. His hands were bare, free from the gloves he so often wore when they were together on the rink, and the heat of his palm burned straight through the denim of Yuuri’s jeans. He slipped his own hand beneath the table and found Victor’s. Hidden from sight, their fingers began to flirt and play. A secret conversation all their own that needed no words.

Yuuri was aware that at some point—a moment in time he couldn’t quite place—Victor had become his boyfriend.

There wasn’t a single instant when it happened. It was a slow awareness, as if Victor had silently been asking the question for months now, and Yuuri had been giving him the answer a little more with each passing day.

I finally got the Yuri Katsuki GEM figure! He will go nicely with my Victor one of the set. Too bad I’m in quarantine away from my apartment where that one is.

Anybody else use this song to come down from panic attacks???

For the last couple of months, I’ve created a series of illustrations of Victuuri, inspired by this beautiful dance music video of Unsteady by X Ambassadors. It’s such a beautiful piece of music and such an incredibly intense and touching choreography, I just had to explore it in depth. It’s been a lot of fun, and very educational. The whole series consists of 9 illustrations, these are the first three. 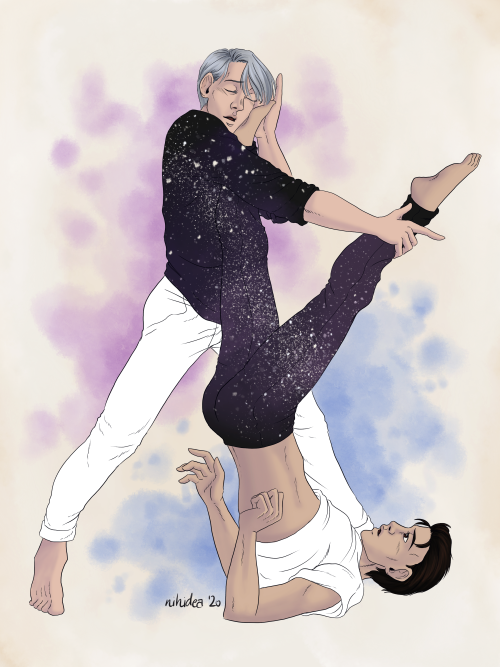 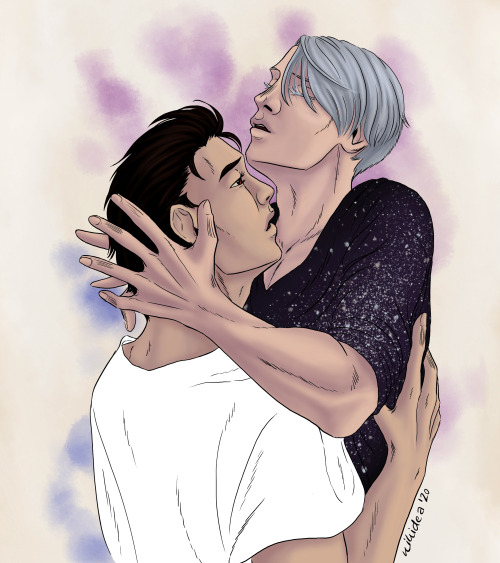 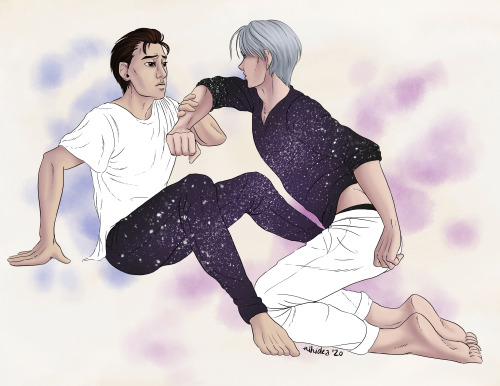 Me before yoi: “i don’t believe in love”

Me after watching yoi:

I’ve been dead to Tumblr for years now but if I make a post about anything, it’ll be my constant-questioning that decides to take over and allow myself to make a reappearance.

Now: for months upon months, the few people that remain in the Yuri!!! on ICE fandom ask the same question: “are we ever going to get this Ice Adolescence movie?” I myself have been one of those few people who both remain foolishly loyal and asking these questions. A lot of people have lost hope and given up waiting, thinking that the radio silence us overseas fans have received is the creators’ way of hoping we forget everything while they then drop the news that there is, in fact, no movie coming.

As frustrated as I am and as much as I’ve chided in with these chants of doubt, I can’t help but hold on to a little bit of hope, which is Kubo’s Twitter. You’re probably thinking “yeah, it’s dead, she never posts anymore so how is that reassuring?” Well, let’s take a step back in time all the way to the days where season 1 was coming to a close and the fandom was at its peak: Kubo tweeted CONSTANTLY, her page had numerous updates on her life, the show, etc every single day. Then, when the movie was announced and production (presumably) began not long after, her tweets began disappearing, becoming few and far between. From my perspective, I would take that as a sign that she’s working very hard and is putting her focus towards the movie rather than social media. Even still, her Twitter has remained a desolate wasteland almost for the past year or so. Her last original tweet was in October of last year (2019), and the most she’s been active is retweeting a few things here and there. (And if you ask me, she looks like she’s lost a lot of weight which is a tad bit concerning to me).

Is this proof that Ice Ado is 100% on its way to our screens any time soon? No, it’s absolutely not. Am I trying to hold on to even the slightest bit of hope, even though that thread grows more feeble by the day? Yes. All we can hope for is an end to the radio silence, and that we are absolutely spoiled ROTTEN if/when more news comes out. We deserve it after all. I’m just trying to find ways to hold on to this fandom for dear life.

I would sell my soul to the devil if my ships could be happy, canon, or both. I’d then become a demon and find someone to summon me so I could come back to earth and see them live out the rest of their lives in happiness.

“YOU UPGRADED HIM?!?” It was more of an accusation than a question, hurled in the direction of the soundboard. An Italian accent emphasized the anger in the spewed words as Victor watched a young man storm into the middle of the arena, arms thrown up in his ire. He pointed his finger like a gun ready to blaze, but it wasn’t an actual gun this time, only the puffed-up bellow of an infuriated Italian.

The riotous crowd had died down in the few minutes since Yuri’s win, the massive throng tapering off to some stragglers. Lingering wisps of fog eddied around the steel barstools, evaporating as the warehouse lights turned on. A closing sign. Only Victor, his company, and a few crews and teams remained near the cage. Phichit entertained Yuuri and Chris, skimming through the pictures he’d managed to take, though Victor hardly knew when he’d had time. It felt like only a second between when the electronic beats started up and when Yuri stood atop the pile of automated carcasses, claiming victory. If he hadn’t been gushing sparks from the wires of his severed arm, Victor would have thought he’d traveled back in time, into a gladiator pit where Yuri was king of the lions.

Otabek simply shrugged at the man, but Victor could see his smirk growing as Yuri rolled up next to the mix stand. “You took their heads off?” was all Otabek asked, voice as low as Victor remembered from the institute, filtered with ease versus the commanding tone he recalled.

“They took my arm. We’re even. They’ll be fine.” Yuri kicked his skates off and up into his arm with on movement, his nonchalance disconcerting as he leaned over the edge, relaxing his remaining arm while the other dangled from his hand.

Title: Lover
Rating: E
Chapters: 15
Word Count: TBA
Summary: “I mean you have a great theory here, what are you going to do if you’re right? What if your beloved Yuri is just a cold blooded killer? Are you going to warn people? Or try to turn him in?”

“No…. no I’m going to stand by him, he wouldn’t have murdered people for no reason Chris!”

….Wait a minute what-

“And even if he IS just a cold-blooded murderer, that’s ok! I’ll still stand by his side! I will protect Yuri Katsuki at all costs!!!”

Or: The AU where Yuri is essentially Taylor Swift, Viktor is his biggest fan, and Chris accidentally starts a conspiracy theory that Yuri’s songs are more about murder than bad break-ups

Also: Meet-cutes, vampirism, and too many crop-tops 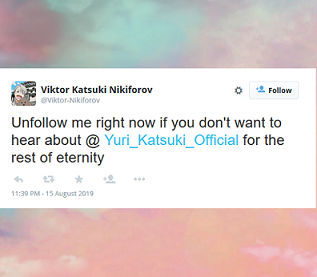 Popping in for a quick post because i miss these dorks;; ive been rereading the viktuuri classics like reiya’s rivals au, you cant plan for everything, winter song, etc. to pass the time and its been one hell of a rollercoaster;;; please hmu if you have any fic recs because its been 3 years and i am thirsty for content HAHAHAHA;; I actually really like how this one turned out, and i was thinking of maybe animating it in case i wanted to try animation out;; i might also add some background in, who knows 🤷‍♀️ Thank you so much for the support!! Love lots ♡♡

one more thing before i go to sleep. my friend just sent my these and i am in luv with them pics.

Viktor and Yuri are soulmates and nobody can tell me otherwise.

Almost done with the next chapter!!!! I can’t wait until you get to read it!!!!

spent the last two days rewatching yuri on ice (for like… the fourth time lol) so here’s a yuri! 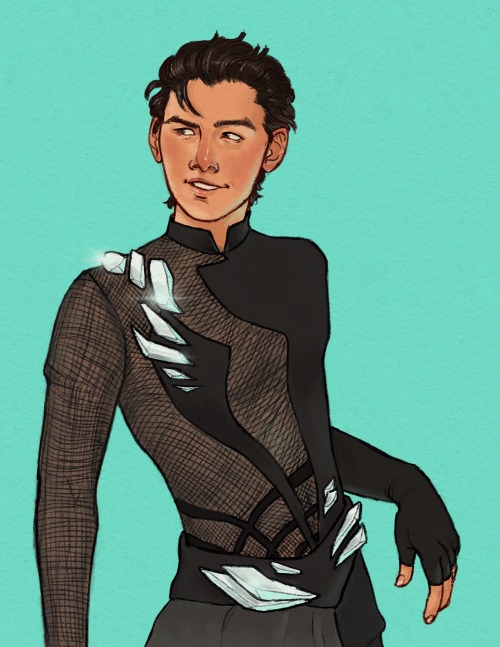 #yuri on ice, #yuri katsuki, #yuuri katsuki, #fanart, #yes i am sticking with my dead fandoms theme of 2020 thank you
347 notes · See All
nihideadrawsPhoto

Have some soft gay boys. and thighs. and bums. 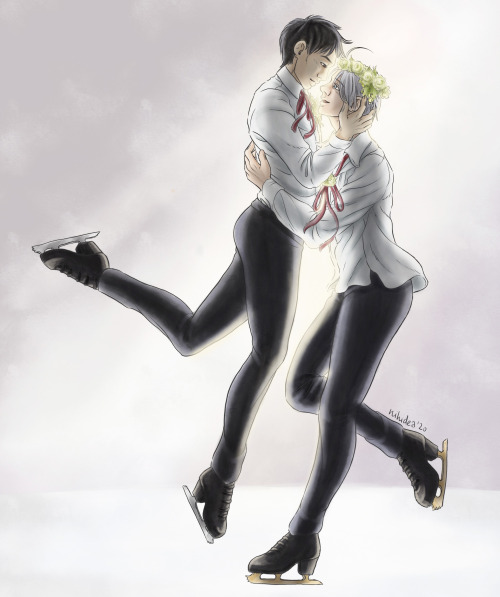 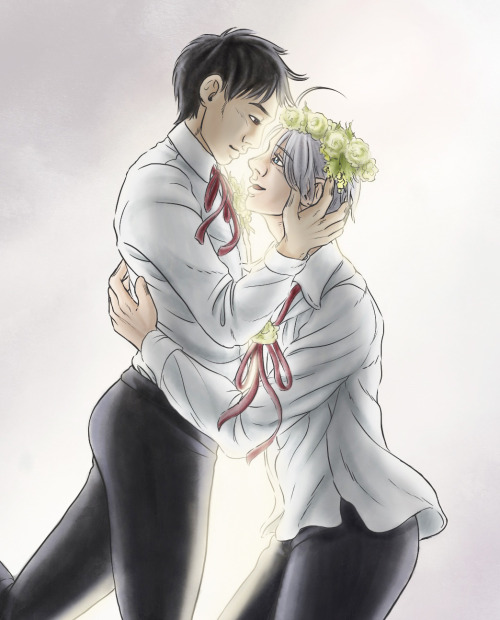