Y’all this is what my story was supposed to look like but I uploaded the workskin and ao3 got rid of most of the styling, rip. So now it’s just a dream and a wasted weekend…

(u can still read my story here tho) 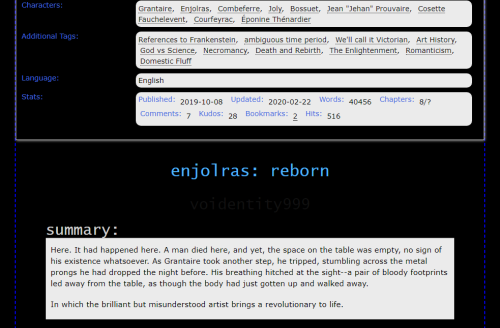 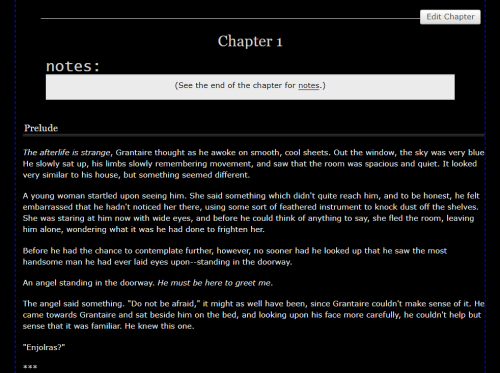 Want to see a jealous Geralt??

Like to witness some Roach and Jaskier bonding time???

Have an unrealised need for them to snuggle by the fire to get warm????

when you post on ao3 and try to be “patient” for comments to come in:

hey guys, a fic of mine just reached 50k words which is something I’m really proud of since I struggle a lot with writing long things, anyone wanna give it a look?

WHERE IS OUR SASUSAKU( ´◔ ‸◔`)

every fic is self-insert if you project hard enough

sfjdlkjdsf that was kind of ominous, but yes! Here it is!! The winner of my marginally successful 10k milestone event!!! It’s gna have 2 or 3 chapters, and I have yet to decide which, so those will be up eVeNtUaLLy. I didn’t want to keep y’all waiting any longer for it, so I decided to post a chapter 1 now instead of waiting to write the whole thing before posting it. It ends at a satisfying stopping point anyway, so hopefully it’s fine for now lol.

Somebody requested I write them smut- im not quite sure how much more clear my ao3 name can be….

#its literally IDONTWRITELEMONS, #i mean, #actually no, #there is no excuse, #writing, #ao3, #ao3 writer
0 notes · See All
bookdragonthingsText

He was getting more anxious by the minute, he tried to ignore the gnawing voice in his gut that asked if he was a Gryffindor or not. Courage had seemed a much simpler ideal when he was 17.

Not little girls.  17 and older.  Considering I had older lovers at 17 and, gee, my life wasn’t ruined, I don’t have a problem with Shipping that age.  But FYI Milly’s 18 in my fanfiction.

As for “old,” I drool over this guy, so I sure don’t see why Milly wouldn’t.

So with all the fuss over the apps that have been pirating ao3 content wholesale, I think more than a few writers have had to make the difficult decision to make works there available to registered users only. I hated doing that. I love writing and I love the thought that some little thing I write may be the thing to draw someone into a fandom. I just got an anonymous ask in my inbox that broke my heart. Someone was concerned that I had removed my stuff and was sad because they liked my 00Q fics. I would urge anyone who reads or comments anonymously to please consider just registering with ao3. It isn’t difficult and you can always set up a throwaway yahoo or gmail account to link to it. I want people who have read and liked my stuff to be able to do so.

#ao3, #setting works to registered only
15 notes · See All
flowers-n-whiskeyText

The air is loud with the shouted question and the lingering echo of the slap.  Dutch stares up at the man who hit him, eyes wide and throat empty of words.  The mark on his cheek tingles and burns.  The book he holds in his lap is a distant memory.

“Rather, what do you think you are?”

Hosea’s green eyes are livid, his lips pulled back from his teeth in a grimace as he stares down at the man sitting in the fold-out chair before him.  Hosea doesn’t get angry.  Not at Dutch.

His palm stings and starts to itch as seconds tick by.  He speaks again, can’t stand to let the silence go on too long.

“Because you are not the man I knew.”

Bill is frozen with a spoonful of stew lifted halfway to his mouth.  Kieran has his hands curled at his side, as if a child caught between rowing parents, and Karen looks like she wants to take several more gulps from the empty bottle in her hand.  By the fire, Abigail folds little Jack into her arms, kisses the top of his head. John’s hand settles on her shoulder.  No one moves.

“You are not my friend.”

Hosea’s hand trembles now, the power in him waning.  A cough crawls its way out of his lungs to the back of his throat and he tries to swallow it.  It comes out in a choked sputter and, where he sits, Arthur’s muscles tense further and his arm shifts involuntarily, as if to reach out.  He doesn’t rise, blue eyes boring holes into the space between his fathers.

“You are something else.”

The words have almost lost their strength now and that only makes the atmosphere more distressing.  Burdening. Terrifying.  The air weighs down, heavy and thick on Hosea’s narrow shoulders.  His lean body seems to bend toward the ground as Dutch rises to his feet, the book laid closed on the seat he vacates.  Dutch is shorter in height, taller in bearing.

Hosea’s hand is still lifted, as if he’s forgotten what to do with it, and Dutch catches it in his own grasp.  The gold and silver rings leave dents in the other man’s skin.

Dutch asks the question in a subdued tone, as if the slap had struck all bluster and bravado from him.  Hosea’s face is impassive.  Everyone is still, turned to stone by the pain in the old man’s eyes.  The air bristles with unspoken emotions.  Both men look like they wish they were allowed to cry.  Hosea answers in a voice rubbed raw with heartache.

Going through my AO3 bookmarks (which go all the way back to 2014) and I’m surprised and a little saddened by how many have been deleted by the author.