We looked inside some of the posts by frosteee and here's what we found interesting.

VALENTINO & ANGEL DUST DUET/COVER OF ‘Do What U Want’ BY LADY GAGA. IT’S AMAZING! LISTEN! 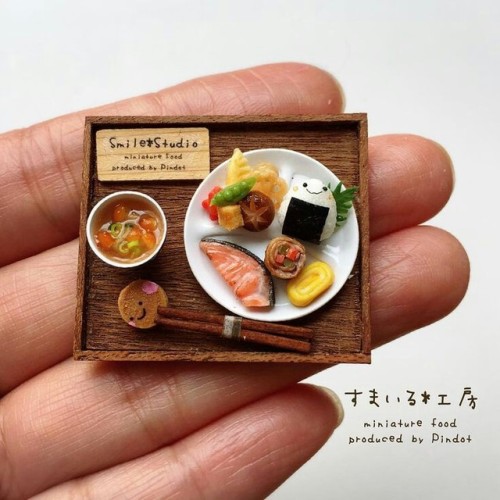 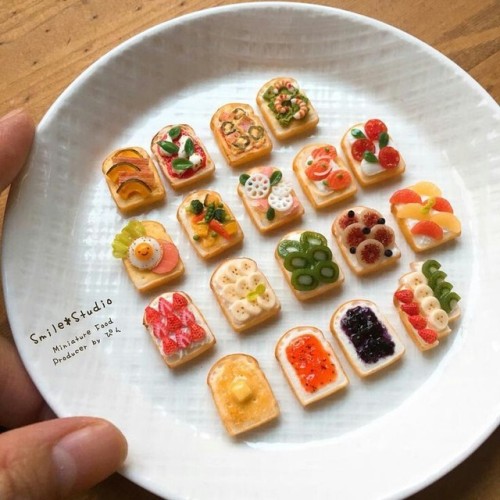 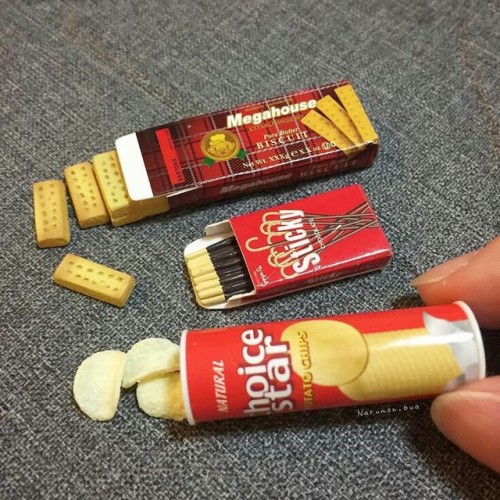 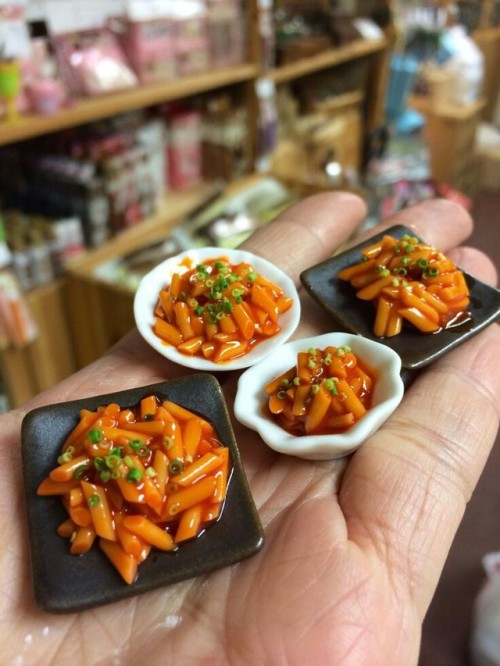 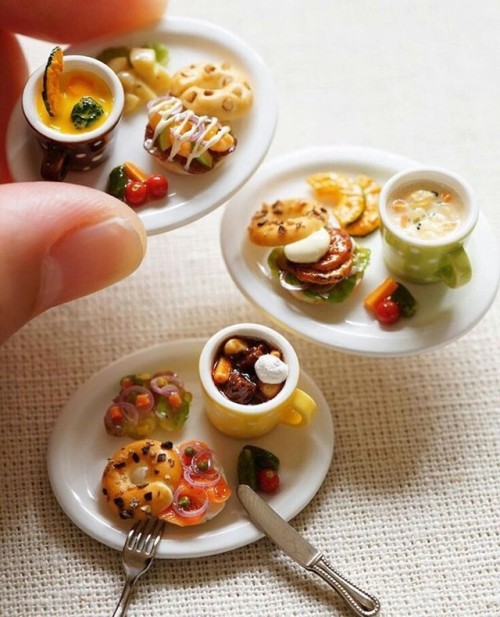 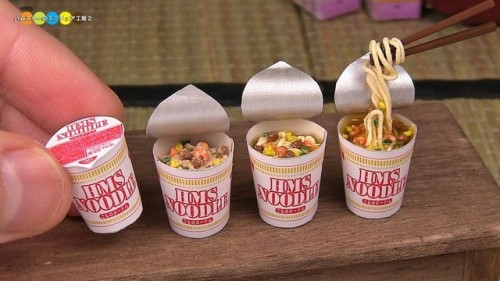 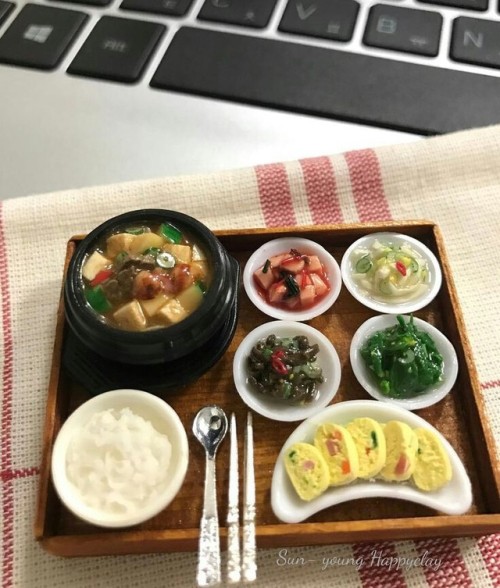 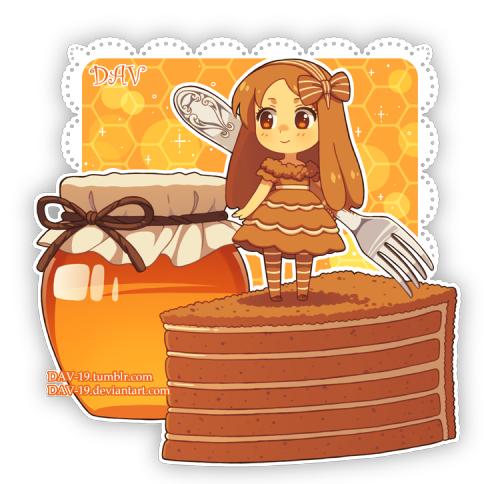 A little series about meals you would have in Paris and a cat who desperately wants to partake. 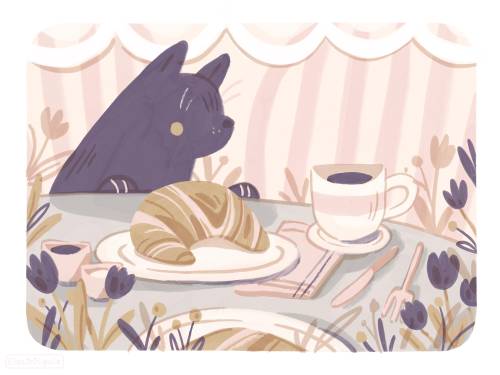 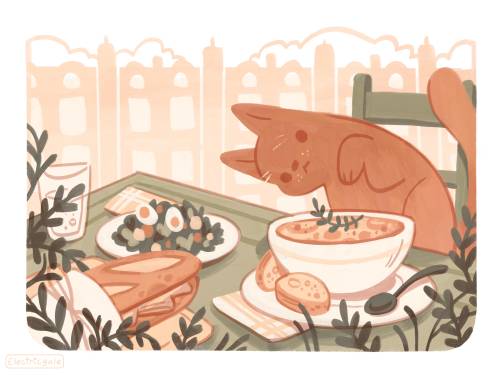 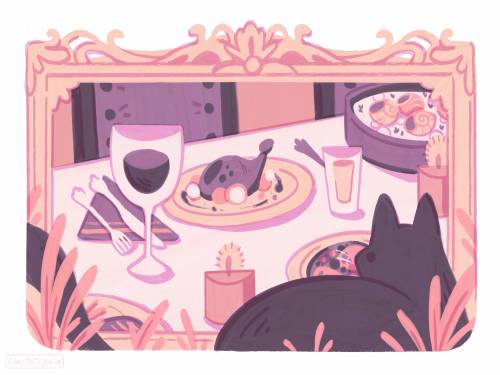 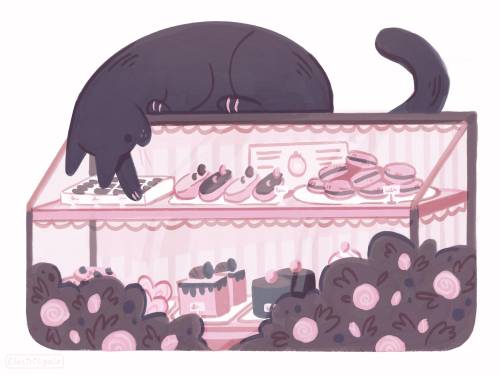 french recipes: if you’re not making this in paris then what’s the point. fuck you

italian recipes: use the left leg meat of a pig from one of three farms in this specific area of tuscany, or from this day my grandmother will begin manifesting physically in your house

american recipes: buy these three cans of stuff and put them in a pan congrats you cooked

chinese recipes, as handed down from mother to child: season it with a pinch of this and some of that. you want to know the exact amount? feel it in your heart. ask the stars. yell into the void.

English recipes: boil and salt it. Okay that’s it enjoy

Greek recipes: You followed all the right steps but this isn’t quite right. I don’t know what to tell you.

Australia recipes: chuck it on the barbie

Latinx recipes: you will never make it better than your abuela, face the facts

Armenian recipes: spend eight days laboring over the stove. the food will be flavorful with the sacrifice of your sanity. no one will appreciate it.

Canadian recipes: It either needs more bacon, more maple syrup, more gravy, or an unholy combination of the three

Polish recipes: you have to toUCH THE DOUGH, FEEL THE PIEROGI IN YOUR HEART, TOUCH IT. LICK IT. SMELL IT.

Every time I see this post, I learn more about how different countries’ cuisines AND neuroses.

Indian recipes: there are 500 cuisines and that means 500 versions of this dish that has 500 spices so gl

ashki jewish recipes: no, no. no. more onion.

internet recipes: here is a heartwarming story about my baby sister’s third birthday that i completely made up, and a copypaste from alton brown.

for the Pacific NW of the USA: Dinner? What is dinner? Here, we graze. No meals just snacks cause it’s wet and cloudy and we need comfort food.

I also want to amend the british food:

Not only do you boil and salt it, but add about a cup of brandy (or brandy flavoring), almond flour or some kind of organ meat. If you’re making a pie, do all of the above. Also, curry: it’s either so full of cardamom and cloves you could choke on the smell or its the best damn curry you ever ate in your life and there is no in between.

I run a Canadian food truck. Yes to the bacon…yes to the gravy…add lots of cheese curds. I haven’t done the maple thing yet.

Portuguese recipes, from my mum’s village: Rabbit today! Yes, the ones you keep under the stairs outside, your avo beat one to death earlier, isn’t that helpful? Yes you will need a lot of potatoes. And rice. And fish. And beans. And bread. God HELP you if you forget the bread! You need to make enough food for the village for the next ten years!

Portuguese recipes, from my mum’s village, for us visitors: Yes it will be a lot of food, but that’s OK, the villagers will stop by through the day and eat most of it, hopefully. Don’t worry, city dweller, you are not being robbed. You’re probably related to at least 80 of them anyway. Good luck! 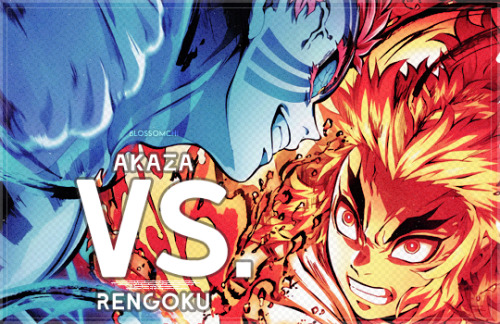 i like him a lot (and his gay eyes) 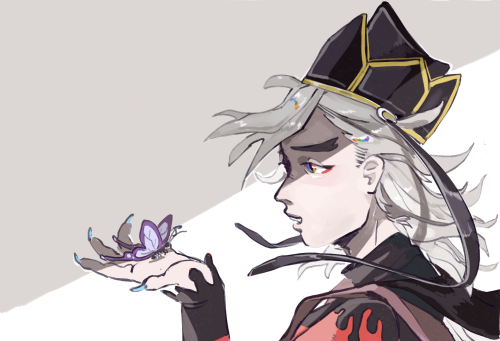 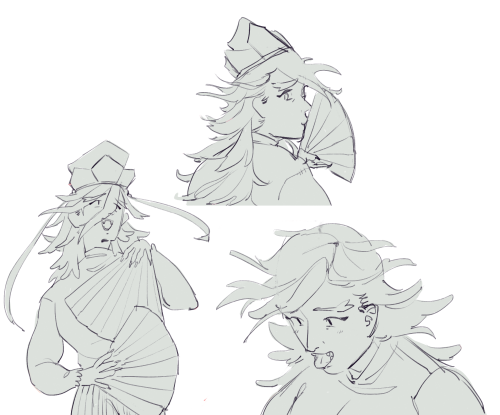 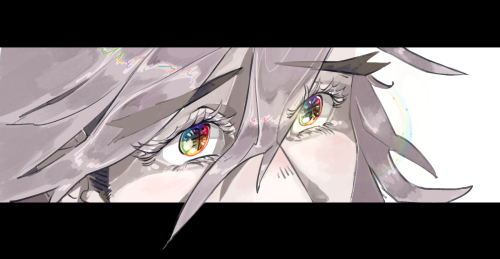 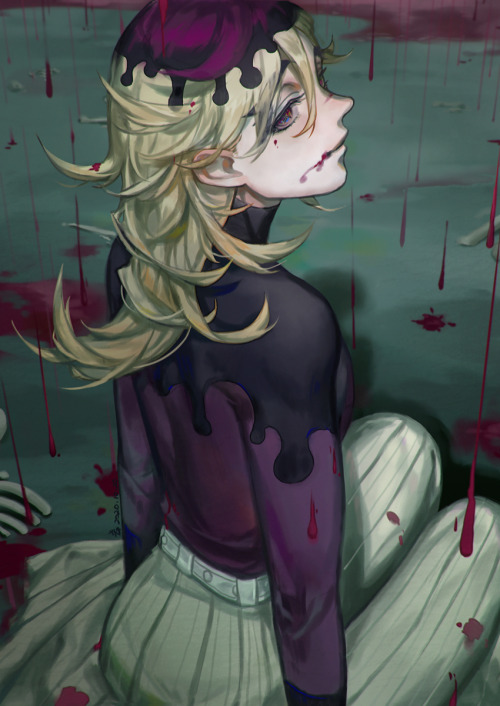 Lookit how precious he is here!! :D

I’m convinced Doma is projecting his own existential futility and helplessness on Kotoha here.

We’re talking about a man who has lived 100+ years as a fake seer while being fully aware of it, but has managed to delude himself on some level that he is doing something right, even though deep down he knows he really hasn’t. Doma knows it - he’s known it since he was small, when he cried out of pity for the people who sought salvation from him, knowing that he couldn’t give it to them.

We’re talking about a man who has been spoiled, doted on and revered for 100+ years as a holy being - he probably doesn’t know how to wipe his backside by himself, or at least wash himself. He would be utterly helpless in the outside world, and he knows it.

That’s why he stayed as the cult leader all those years, and why he only ever seemingly left it to attend Upper Moon meetings or hunt humans. We were never shown him acting as a human in any capacity or scenario other than Gracious Founder. Yeah, he might’ve, but we never saw it. Doma clearly can only shine in two environments, both of which he has 100+ years of experience in, and are literally the only thing he knows: the cult, and killing people.

So when Kano throws it back at him, the reality of his miserable, empty life -

Doma gets angry. His smile drops and he goes for the kill. These thoughts have clearly always been whispering at the back of his mind, but he always managed to suppress it with the delusion of ‘helping others’. It’s tragically ironic really, for someone who saw so much delusion around him and who believed himself above it, Doma spent his life fooling himself to keep living.

I keep saying this, but I’ll reiterate again: an unfeeling psychopath who plays pretend for power/status/money etc. does not get rattled by a little girl stating the obvious and questioning his life’s worth.

Ahh, so! I’ve seen people do analyses on Douma and while i loved them all equally, i also wanna add my thoughts on him~

Before I begin this, I want to say I’m no professional and anything I say is out of personal experience, speculation and/or reading around. Please take this with a grain of salt~

@trashymcree​ same to all of that- both of them have faced trauma, it’s just the way they were affected by it that is different (and the way it’s portrayed makes a big difference in how people see them)- both are very complex cases, though. and thank you! hoping you had a good day too!

Replying way late, but just wanted to add that I think I think the difference between Akaza and Douma’s response to their respective trauma/abuse is what sealed many people’s perception of them:

Akaza reacted with righteous fury towards the severing of his emotional connections and after losing the will to live, was given the strength to improve his circumstances/return his happiness and worked hard to do so (even if it was misguided and delusional).

Douma reacted with passive acceptance, internalising others’ expectations and desires and used that foundation to continue living, accepting a life surrounded by fake ties and doing nothing to change that. Even after becoming an immortal demon who could have destroyed the temple, everyone in it, and done whatever he wanted, Douma remained the sect leader.

Akaza reacted with understandable emotions and pushed against his misfortunes. His reaction is much more palatable because his feelings are more proactive and intense, and because he did what he could to fix things, even if his methods weren’t the right way to do it.

Douma, on the other hand, accepted his abuse and trauma as his lot in life - his purpose, even - to the point that even when the opportunity to change his circumstances presented itself (Muzan) like Akaza, he did nothing. He ate his followers, sure, but it was a warped extension on his pre-existing saviour mindset, which was placed on him basically from birth.

I think this is understandable as well, but a much harder pill to swallow. It’s also easy I think to see his lack of reaction as psychopathy, and Shinobu tells him to his face that he’s mad. Maybe he is, after all he went through. He’s never lived a normal life, never known true human feeling from anyone.

Douma’s reaction is the worst, most dreaded existence. Douma is an abuse victim who has accepted, minimised and rationalised his abuse and remained in the same building as his abusers/toxic enablers, and would have done so forever if he hadn’t been killed. He has completely withdrawn emotionally from the world and others, while Akaza wears his heart on his sleeve and holds the memory of loved ones dear.

I think that terrifying reality of Douma’s life, as well as his emotional withdrawal, make it hard for people to see the damage he received and accept that he may not just be some unhinged, unfeeling psychopath. I think Douma clung to the sham, even if he knew it was a sham and that nobody really cared about him, as a means to survive. He didn’t know anything else. The only thing he felt he could do was go along with it, clinging to the belief that at least he was helping people in some way.

I think Douma displayed real emotion in his past, too, not just in limbo with Shinobu. There are two occasions:

Spoopy month! The animation is a little messy bec I rushed it..

A phrase used in Japanese tag - Onigokko [鬼ごっこ] - which Amaimon uses here to show off his extensive research of Japanese culture. And poking ironic fun at Rin, a (half) demon. Good job, Amaimon! The children will love you!

I’m at the episode where Ciel plays chess with the ghost of Edward V for who gets to have Sebastian. I had originally figured this was a parallel to how Sieglinde got Sebastian for a little while but since rCiel has no good servants (Tanaka is aging, UT is useless) and he needs staff who can handle the manor and be trusted with the fact that they’re serving a living corpse, I’m wondering if he might try to poach Sebastian somehow too.

The words “Ciel plays chess with the ghost of Edward V” is amazing. I forgot how goofy season 1 got lol.

Honestly I think it’s very very likely. I doubt R! Ciel has the means to find someone who is willing to disregard everything O!Ciel has, and more, in the time it will take for the manor and the estate to go to hell because at this point only a small undead child and an old man are handling things.

I bet they’ll do chess, and it’ll be a nice callback to the Green Witch arc where something similar happened in O!Ciel’s mind.