They are twins (like Luke and Leia) from ship Opeli x Corvus.

Their names are Lucas and Lija.

a headcanon no one asked for (just because i wanted to talk about some of my otp’s. and a friendly reminder of my poor english skills, get ready)

love is in the air! (couples and valentine’s day)

amaya and janai don’t care about valentine’s day, for them this day is just like any other of 365 days in a year. when they are asked how they celebrate this day, they answer that they never do. once gren saw them going on a date on february 14th and tried to tease them, recalling their statements that this day means nothing to them. it turned out that they didn’t even know what day it was

gren and kazi, on the other hand, love this holiday very much. they like this whole spirit of love. on this day they are even cuter than usual, almost constantly holding hands, smiles don’t leave their faces. they walk around the city all day, swinging by shops and buying each other a bunch of useless trinkets, and in the evening they go home and cook so much food that sometimes they have to invite amaya and janai to be able to eat everything (however, recently even that’s not so necessary, nowadays amaya and janai come without an invitation, waiting for a delicious dinner)

opeli starts her day with breakfast in bed. however, almost all of her days begin this way, but this time corvus cooks everything in the form of hearts or even angels with a bow and arrow, and also a small cake in addition. opeli says she’s not really a fan of valentine’s day, but in fact this is one of her favorite days of the year when she can really relax and find an excuse to make some time in her busy schedule to spend it with corvus. corvus doesn’t have any special feelings for the holiday, but he likes the way opeli’s eyes shine in the morning when she eats breakfast prepared for her, complaining that she has already told him many times to stop doing it every year

rayla hates valentine’s day from the pit of her gut. and this is what incredibly amusing soren. so much that every year this day for rayla begins with the awakening in a heap of rose petals, with paper hearts hanged and scattered throughout the room. then she receives a heart-shaped cookies as a gift from soren (pre-ordered by him from the baker) and tries her best not to finish him this year either. and every hour of this terrible day it’s getting harder and harder (soren doesn’t miss the opportunity to publicly declare his love or start kissing, or present to her some stupid valentine’s day related trinket or support this stupid centuries-old tradition in some other way), so by the end of the day it ends up with a buttle, as a result of which rayla kicks out of soren a promise to never celebrate this holiday again. and next year everything repeats itself

callum and claudia do not particularly celebrate this day and do not pay so much attention to it. but from time to time they still give each other some purely symbolic gifts. but no one is offended, even if one of them gives something, and the other one hasn’t prepare anything, this happens all the time. but in general, for them this day is no different

lain is too much into this day, WAY TOO MUCH. and like daughter like mother, tiadrin really hates this holiday. or rather, she hated it until she met lain. with her previous partners, she instantly stopped any attempts to drag her into this senseless and stupid tradition, but something went wrong when it came to him. he just adores valentine’s day and always rejoices it like a child, literally blossoming in this whole atmosphere of love in the air. so this day tiadrin starts by collecting the most beautiful bouquet she can and giving it to lain, first thing when he wakes up. and not only her. runaan and ethari each also give him a bouquet, and all day literally turns into lain’s second birthday, when his wife and his two friends just surround him with flowers, hugs, gifts and love, and he in response radiates love that warms all three of them up. he just loves this holiday

THIS!
Look at Corvus looking at Opeli - don’t change my mind XD 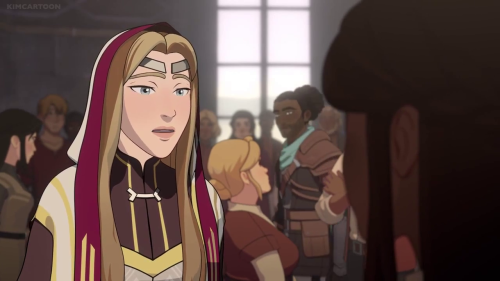 #(idk how to tag people but i love you corv [@pigexns]), #local teen has too much fun in the watch party, #kuroshitsuji, #black butler
1 notes · See All
fvirymvePhoto