#im not ready, #i keep forgetting its a horror/tragedy, #and jon and and martin will most likely die, #but for now, #take a jon listening to martins poetry, #i orginally drew this for my partner, #avi if ur reading this, #you go u funky jon kinnie, #tma, #the magnus archives, #jonathan sims, #jonmartin, #tma art, #tma fanart, #martin blackwood, #the archivist, #jon, #jon sims
4 notes · See All
tmascaringmysleepawayText

okay, guys, imagine jon reading statements for 36 hours, y’know, as usual, and he notices that his vision’s kinda blurry and his eyes hurt. so he rubs them and says “guess i need reading glasses” and then martin is kneeling near him and smoothly sliding his own glasses on jon and maybe while he’s at it tucks away a stray hair too and says, in his sweet, caring voice “so, how is it?” and that’s the statement of how jonathan sims dies from overloaded gay feelings

pls no spoilies, i’m only on episode ten of the magnus archives and i know absolutely nothing but this is who i see in my head when jon talks oof 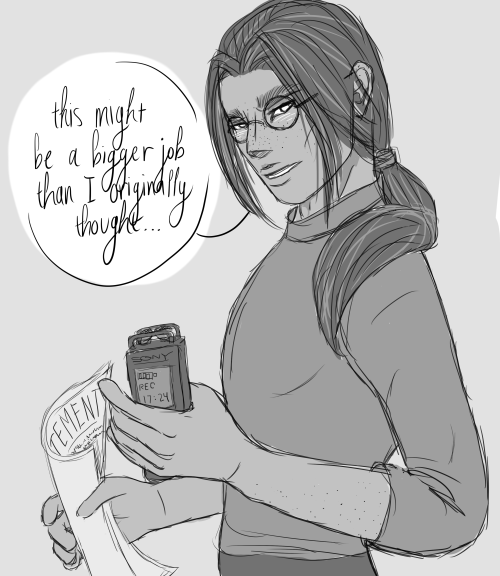 Jon and Martin have Not-Tea

You know that text post that’s like ‘massive eye that floats menacingly in my kitchen: [eye emoji]’? Yeah that one belongs to a Lukas because fuck them in particular

I just think he’s neat and deserves to relax

(Inspired by the mutterandmumble ao3 fic where Jon learns to embroider) 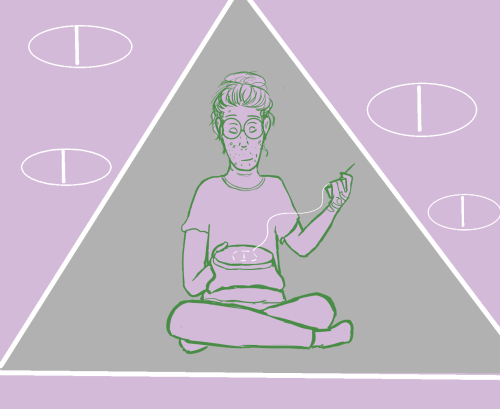 #avis art, #tma, #jonathan sims, #the magnus archives, #tma art, #this fic also got me into embroidering!!, #he deserves to relax goddarn it
3 notes · See All
avatarofthebeholdingText

US tma au where an election is taking place and the following are true:

• Nobody dies (except maybe of embarrassment).

• The incumbent president is Jurgen Leitner, and his vp is Mary Keay. Leitner lost the public’s favor because his “relaxed” (nonexistent) rules about access to the national library had…consequences. Mary very much wants to be president & is secretly trying to figure out a way to poison Leitner/pin the blame in on someone else.

• Daisy is the head of the Secret Service. She is constantly watching Mary, and every week she has to thwart at least 10 other attempts at assassinating Leitner.

• Gertrude Robinson is the Democratic nominee, and she’s chosen Eric Delano as her potential vp. She appeals to people who are tired of the government not taking action, promising to get shit done and make the world better at any cost.

• Gertrude’s assistants are Michael and Gerry (*cue awkward flirting on the campaign trail*). Her campaign manager is Basira.

• The public absolutely adores Michael, who is usually the member of the campaign to speak to the press.

• Gerry HATES politics. Michael is very idealistic. Through their conversations, Gerry is able to find some positivity in the situation he’s found himself in, and Michael in turn develops a healthy level of skepticism.

• A photograph of one of Gertrude’s rallies (taken by Tim Stoker, a talented photographer and notable member of the paparazzi) shows Michael kissing Gerry on the cheek in the background. It makes the national news. Elias is incensed.

• Simon Fairchild is running as the candidate for the Libertarian party, and Mike Crew is his campaign manager. He’s talked Nathaniel Lukas into running as his potential vp. At one point, Gertrude and Elias actually get concerned about the amount of support he seems to be getting.

• Helen is a reporter tasked with covering events at the White House.

this was originally going to be part of a bigger thing that i ended up scrapping, but jon looked too good with a beret so i had to keep him!! in my mind this is the outfit he wore on his way to ny-ålesund

[ID: Two identical drawings of Jon Sims against two different backgrounds.  Jon is a thin, Brown man with straight hair reaching down to his middle back.  It is dark with streaks of gray.  He has a thin mustache and beard, pockmarked worm scars, a slash across the neck, and pierced ears.  He’s wearing a maroon turtleneck and matching beret.  He looks towards the viewer with a solemn expression.  The first image features a dark green background with lighter green slashed across the top, slanting down to the right.  The second is a burnt orange with the lighter shade on the bottom, slanting up and to the right.]

ID by the wonderful @milesnsmiles!! 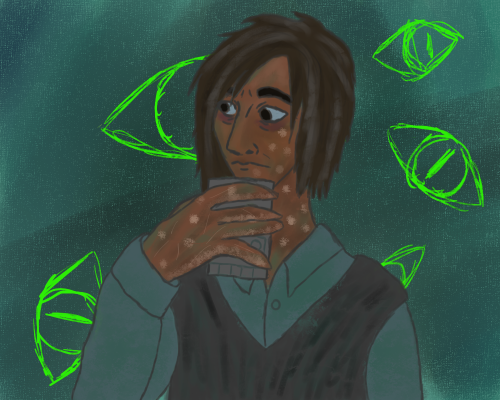 #myart, #the magnus archives, #tma, #jonathan sims, #hhhhh i've spent so much time on this, #and i'm not satisfied with the result but hey, #at least it's a finished thing?, #yay me???, #i'm not sure i like my design of jon but i guess i'll figure it out...eventually, #in the meantime here's another half assed thing i drew
0 notes · See All
gerrydelanoText

“Okay, so something else.” Jon sounds remarkably calm for a moment, even speaking through his own tears. “Run away again, but better this time. Pack more than three sandwiches, and warmer clothes. I have a big luggage bag from our last trip to Israel, I’ll—”

“—with no monsters, a-and it won’t matter that we don’t have parents because—” 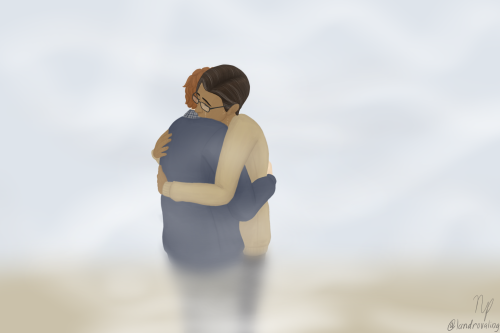 #the magnus archives, #magnuspod, #jonmartin, #jonathan sims, #martin blackwood, #rusty quill, #tma spoilers, #loosely i suppose, #hey yall i did this in one sitting like an insane person rip my hand, #i am a Fool, #my art
8 notes · See All
titanfallingText

Part 11/11 of the Road to Damascus series

Basira paused in the middle of some thousandth email she was replying to. “Do you think you could tell where Magnus is now?”

Chin in hand, Tim took a moment to think. “I might be able to, but I wasn’t really around him enough after all this happened to get a proper lock on what he feels like. Even then, it depends on how far he is — the only ones I can hold onto across long distances are Jon, Martin and you.”

Or, in which when becomes soon becomes now, and the End is here.

You know I’m here for you right?

The s5 trailer gave me. Emotions 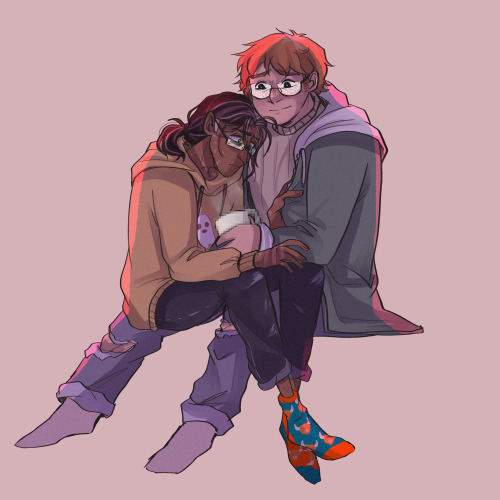 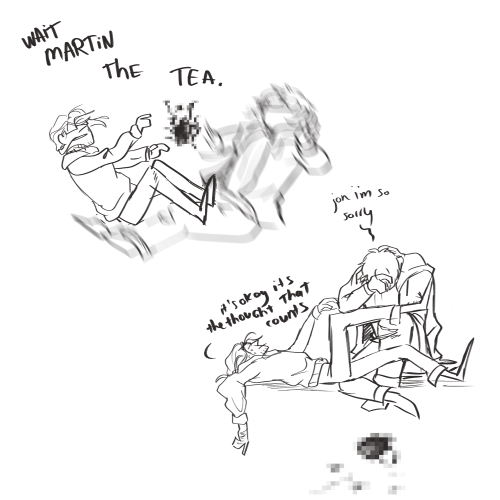 #the magnus archives, #magnuspod, #tma, #jonmartin, #jonathan sims, #martin blackwood, #magnus archives, #my art, #im scared but im also reaaaaally excited!!!!, #but then i remember how all the mechs albums end and im back to being scared again, #anyway my fav this about this is jons novelty socks, #also why draw the mystery tea when u can pixelate it?
168 notes · See All
anartsynerdPhoto

So that season 5 trailer I got to ep152 (A Gravedigger’s Envy) in my relisten last night, and at the end when Jon is talking to Helen in the tunnels, he says, “How much of our willpower is just safety? Comfort, by another name.”

Tying that to the s5 trailer and the statement of, “We can’t trust comfort,” what he’s saying is that they can’t trust their own willpower. That something made Martin forget there was no tea left in the house. That the certainty of knowing a decision is yours and yours alone is… gone.

He feels that he has no willpower left over himself— and whatever he does still have, he cannot trust. He is a conduit for the Beholding’s sight, and that is all he is, now. It shouldn’t feel right; he wouldn’t choose for it to feel right. He wishes it felt horrible. But there are no more choices to makes. It’s over, and there is no such thing as comfort in the aftermath.

#tma spoilers //, #the magnus archives, #tma, #jonathan sims, #martin blackwood, #has this already been pointed out? maybe? perhaps?, #i have no idea but this realization last night felt like being stabbed through the heart, #corvid speak
18 notes · See All
bare1ythereText

The only thing that’s reassuring me that Jon & Martin’s relationship will be okay early season 5 (AT LEAST) is that Jon literally ended the world and Martin was like “That’s okay!! Everyone makes mistakes sometimes :)”

that’s all that matters right now 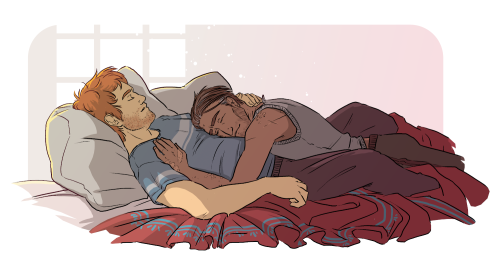 i decided i’d do my own hc jon timeline. he… really falls apart for a bit there.

Check out the speedpaint

Undoing the apocalypse would have been enough for Jon, if all his people survived. Without them, Jon’s only recourse is making it so it never happened in the first place. He’s going to do better this time.

And chapter 11 is up. This is the last actual chapter of the fic. All that’s left now is the epilogue, which will be posted in a day or two depending on how impatient i get