Another week, another episode!!!! Glad to have more Katsuki content since he makes the best damn faces in the show. Though my favorite shot this week has to be Iida losing his sanity because he’s so damn tired. Also, Jirou’s singing was awesome!!!! Loved listening to her sing and I can’t wait to hear more~! Next episode will be so much fun with Monoma appearing again, and also more Eri!!!!

(One day. One day this damn photo will change and I’ll be able to see it because I’ve screenshotted it every damn time it appears)

I LIKE THE PRETTY BOYS, WITH THE BOW TIE

GET YOUR NAILS DID, LET IT BLOW DRY

COME AND GET A TASTE

TO THE GAY BOYS

YOU MY FAVE BOYS

“After being told all that… to not do it… wouldn’t be rockin’ at all, would it?”

Kouji Kouda, who speaks to animals, meets a sign-language-communicating gorilla in:

aight but if bakugou and miruko don’t meet and either team up to kick ass in the most feral way possible or quarrel and claw each other’s eyes out, pray tell, what is

Repeat after me: Kouda is not illiterate.  He should be allowed to speak on an equal level with the rest of 1-A within the context of a chatfic.  Making his only contributions come in the form of emoticons like he can’t write either is not cute, it’s insulting and frankly infantilizing.  Especially since text-chat would be one of the few ways he can communicate freely.

Please be aware that I am going to be hyper-fixating on this for the rest of the Winter 2020 season:

#bnha, #kouda kouji, #tokoyami fumikage, #all I care about for this arc is that kouda is going to have more dialogue
28 notes · See All
handy-dandy-headcanonsText

Putting a more plausible spin on it

Can he control principle Nezu

Who is a literal. mouse.

Kouda was behind the destructive nezu practical test all along

#i love getting replies to these and knowing the answers, #but pls remember this is mainly me memeing, #its scary when i get people being like, #WELL ACTUALLY CHAPTER 3 OF THE 5th MANGA BOOK PAGE 72 SAYS, #Am just having a good time ^^, #tho i do enjoy answers just pls dont make me feel stupid, #thanku <3, #bnha questions, #bnha, #kouda kouji, #koji kouda, #principle nezu, #my hero academia, #mha
21 notes · See All
ao3feed-izuku-midoriyaText

Kouda spends a lot of time in the public woods near UA.

After getting @ginkitsune-imagines-bnha‘s ask about Kouda, I found myself wanting to write about him so here’s a drabble focused on him and Fortune. Although, I can’t really call it a drabble since it ended up being over 2000 words, making it longer than the Jirou drabble lol

#TABF, #TABF post scene, #kouda kouji, #my writing, #in case y'all are wondering, #yuwai-chan is the name of kouda's bunny, #I found that out from the wiki, #cause I had no idea lol, #I didn't even realize how much I wrote, #until i was done, #my love for kouda shines strong here, #he's just so precious, #such a good boy, #I really love the idea of everyone trying to learn sign, #so they can talk with kouda that way, #bakugou learned how to swear in sign before he learned anything else lol
22 notes · See All
class1akidsText

The Class1a stuff makes me feel so emotional… They really feel like a family on this picture.

Other great slice of life things:

Kaminari with a hairpin. That’s it - that’s the post. 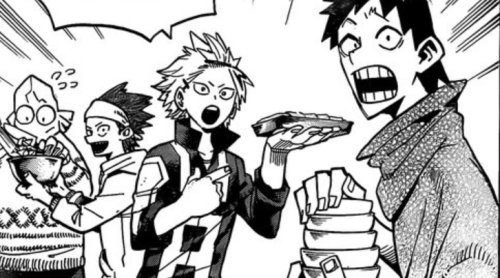 This was another piece I wrote for 3MZ. I wanted to write about this rare pair cuz I just think they’re really cute. Anyway, I hope you guys enjoy and again, have a happy new year!

Summary: Koda stared at Shishida’s back, noticing how broad it was. Now that he thought about it, they didn’t really know each other all too well. The first and last time they even spoke was during that joint training class. From that single match, Koda got the impression that Shishida was one of the most terrifying members of class B. Intelligent enough to use Ibara as a decoy and strong enough to incapacitate over half their team by himself. Without Shinsou, they would’ve lost in record time.

Back in middle school, Shishida was the type of guy Koda would avoid in the halls. He’d be too scared to even make eye contact let alone speak a few words. Shishida totally outclassed him.

While Koda was plenty braver than he used to be, he still wasn’t too comfortable being in Shishida’s presence alone. They were going to be spending the next three years together training in the same course though. Perhaps Koda could use this chance to get closer to him.

Mineta: Okay, what do you think of dogs?