#i got a notification that was like: you have a new memory :), #i have so many photos saved of spock that my ipad is just like ah yes. this must be a loved one, #and it was right, #spock
4 notes · See All
speffText

*Read from the Beginning*

I don’t know if this whole quarantine thing is good for Myrthle, Spock. She looks not good at all.

Why Doctor, I don’t see a reason to be concerned. Her facial expression is quite similar to yours.

“It hasn’t changed in the past hour, Jim.” Spock doesn’t open his eyes, just speaks wearily into the echoey, empty space.

But what else is he supposed to do?

He goes back to pacing the perimeter of their isolation chamber.

But Spock doesn’t seem to have an answer. Good. Kirk doesn’t need a lecture right now. Especially when he can’t escape.

“Bones, there’s got to be another way.” Kirk is frantic, practically pleading. “Don’t tell me there are no other isolation cells on this ship–I know every inch, she’s my ship. Hell, I’ve even been held in several of the other cells before, as I know you can recall, since you’re the one who gave the orders. So what’s this about?”

McCoy is not cowed by his captain’s protests. “Look, Jim, I can’t let you out, not when there’s a chance you could infect the crew. And none of the other cells are available, so I can’t beam you to one of them, even if I thought that was advisable.” At that Kirk smiles, sure he can convince Bones to beam him somewhere, anywhere–his quarters, back to the planet that got him into this mess, the vacuum of space–but the level gaze from the doctor knocks that idea flat. Bones crosses his arms over his chest and repeats, “If I thought that was advisable. Which I don’t.”

Kirk lowers his voice, makes it almost too low to hear, and this time he is pleading. “Bones. You know why I can’t stay here. You know what this’ll do to me.” He closes his eyes, then says one more time, “Please.” He can’t look when he says it. He already knows the answer.

“Sorry, Jim. It’s only three days. If it’s any consolation I don’t think you were actually exposed, but we have to be sure.” He looks at Kirk, then at Spock, then shrugs. He knows what he’s putting Kirk through. He reaches out like he wants to put his hand on Kirk’s shoulder, but of course he can’t. The wall may be invisible, but it still exists. Nothing can get through it, in either direction. There’s a small airlock in the corner for delivering food, and a bathroom in the other corner; the walls to that are invisible too, for the moment, but when someone wants to use it they become opaque, and the door appears. Quite clever, these isolation cells. Keep all the germs on one side or the other.

“Are you alright, Captain?”

Yes, they do an excellent job of keeping the germs where they belong. And sometimes they also trap a man inside with another man.

The man he’s been in love with for months now.

#lirael writes, #spirk fic, #lock down fest, #star trek: tos, #fluff, #angst, #i spilled angst in my fluff, #but there's a nice fluffy ending, #spock, #jim kirk, #leonard mccoy, #pining, #so so so much pining, #it's like a forest, #quarantined together, #accidental exposure to an alien...something, #childhood memories, #tornadoes, #also a meddling doctor, #hahahaha
9 notes · See All
ifdragonscouldtalkText

Leonard still thought Jim’s decision to put him as the second officer was dumb as shit, especially considering he only had very basic and standard command training, but given that the admiralty was stupid enough to sign off on the assignment he was stuck in the position. He didn’t begrudge the larger, mostly private quarters though, especially after three years and some change of bunking with the adult-infant that was James T. Kirk and four years before that of Joanna and Jocelyn. It’d been awhile since he’d truly been on his own, and as he unpacked his meager possessions in a room that felt too large, he wondered whether it was going to be truly good for him.

Anything was better than Jim waking up naked in his bed with a hangover though, he supposed.

He did share a jack-and-jill bathroom with another high ranking officer, but that would most likely not be an issue. It wasn’t the communal bathrooms of the Academy dorms, at least, and he could guarantee some level of sanitization if he had any say in it, so there was that. He had complaints about how far the room was from Medbay, but Jim had already approved (unofficially, but who cared about the bureaucracy) his desire to put a cot in his office down there. Jim had conveniently forgotten to tell him who he would be sharing with, but his bets were on Scotty, and if that was the case at least he would have some decent alcohol and a decent person to share it with. He grabbed his bath kit to find someplace to store it, and pondered over rooming alone for the first time in years, although “alone” was a mislabel on a starship. He would never be alone; he’d probably be damn pleased he had this room to himself, at least the bathroom door locked.

He reconsidered this conclusion when he saw Spock blinking at him placidly from the other bathroom doorway.

“You’ve got to be fucking kidding me!”

my sibling just handed me a doodle of spock and it said “be gay but don’t do crimes. crimes are a violation of starfleet regulations.”

In honor of the treaty and new membership to the Federation, the Enterprise’s hosts have thrown a party. It’s outside, under a pavilion. Balls of light float near the roof of the structure and outside, the night sky is a dark pink. Their hosts are playing music that reminds Kirk of a ballroom waltz on instruments he’s never seen before; members of his crew dance with their hosts or each other, carefully avoiding the alien drinks but cheerfully eating the pastries left out for the party to eat. Kirk spots crewmembers drinking from water bottles they’ve brought with them and ignores the glint of Bones’s flask from across the room.

It wouldn’t do for him to stand in the corner nursing his own water bottle all night, no matter that he’s already danced with one of the ambassadors. Kirk knows another person who hasn’t danced all night either, and he can find Mr. Spock quite easily, as, of course, the man is standing right beside him.

#long post, #spirk, #spock, #james t kirk, #james kirk, #jim kirk, #star trek, #k/s, #my writing, #ehehe
15 notes · See All
incorrect-trekquotesChat
spock: i try to be understanding of the captain's feelings but there's always so many of them
#star trek, #source: tumblr, #kirk, #spock, #spirk, #one is too many and jim has at least three
174 notes · See All
wearinghatsText

I just watched final frontier. How come no one told me about the part with sybok and bones! Sybok tells bones that he has the worst pain! Leonard McCoy is just out there, being afraid of space, carrying his pain around, and trying to keep Jim safe! His pain is the worst! Come on!

Also, when spock put his katra into McCoy was he able to feel McCoy’s pain? Idk how katra works. Spock forgot everything after, but will he eventually remember what it felt like to share Leonard’s body? Will he remember his pain?

He wanted to wait for Kirk but is sleepy

It has been too long since I last draw Spock, and now that I have this isolation time I’m out of inspiration. If you want to share some ideas, please feel free to comment or ask me 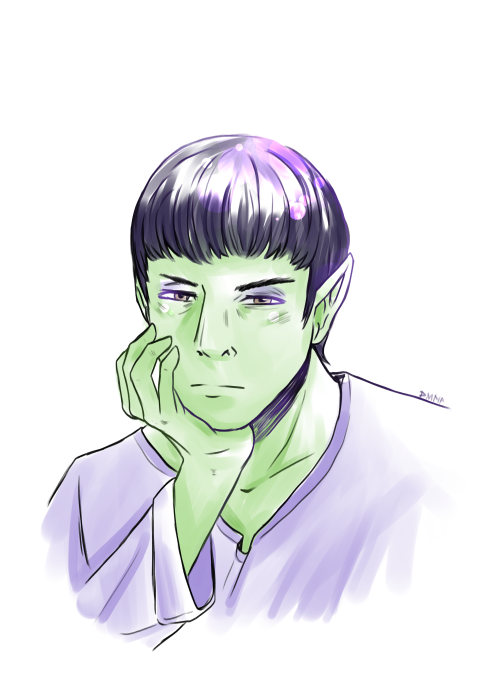 just some watery 2am feels at the courtesy of the Mountain Goats; Riches and Wonders

#its late again at this rate my sleeping patterns will have to do a full circle, #star trek, #spirk, #spock, #jim kirk, #star trek aos, #my art, #james t. kirk, #star trek spock, #space husbands, #aos, #enterprise, #watercolor
231 notes · See All
trek-tracksAnswer
To be honest, being in isolation with Spock would be easier for me than being stuck with Jim. I’m an introvert by nature and Jim is a lot more tactile than I like

Pros of being in quarantine with Spock: Actual silence for as long as you want, good at “parallel play,” occasional philosophical discussions

Cons: Not so great if you have any emotions about your situation

Pros of being in quarantine with Jim: Actual hugs when you’re down, so much talking you can’t even think about being sad, very sweet and conversant in a range of subjects, will physically fight a virus so it doesn’t hurt you

Cons: WILL YOU SHUT UP FOR 30 SECONDS and you can’t punch a virus. No, not even with both fists clasped together.

Pros of being in quarantine with Bones: Actual booze, takes care of you, cured the virus 30 minutes ago

Cons: Tests vaccine on himself suddenly and without warning

[Image: a screenshot of John Mulaney during a stage performance, with text that says “Spock is a bitch and I like him so much.” End.]

I know that memory alpha puts everything in the past tense, but I feel like we should start talking about all star trek events in the future tense, since they haven’t happened yet…. S’chn T’gai Spock will be Home of Sexual.

#you can tell how freaked out by school/the pandemic on a given day, #based on the number of posts i'm making lol lol lol, #txt, #spock
75 notes · See All
spockeverydayPhoto 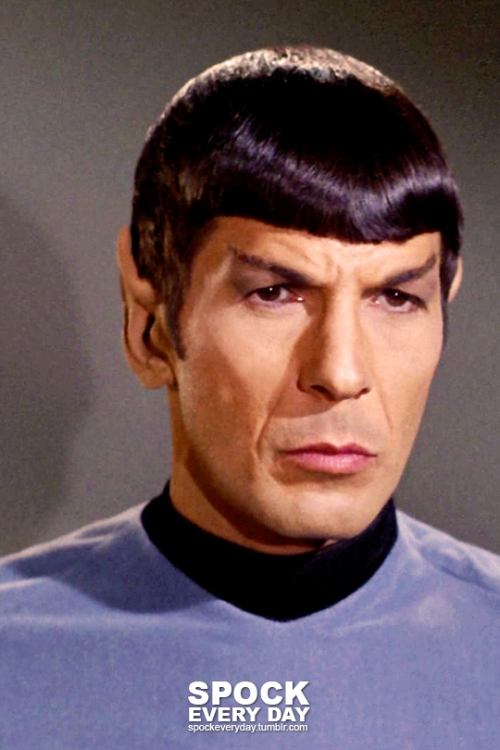 #class, #i was drawing in today haha, #i just adore spock so much and how much he cares for jimmy, #spirk, #tos, #star trek, #spock, #jim Kirk
84 notes · See All
ifdragonscouldtalkLink
This Is How A Heart Breaks - ifdragonscouldtalk - Star Trek: Alternate Original Series (Movies) [Archive of Our Own]https://archiveofourown.org/works/23399341

He collapsed to his knees, pounding his fists into the sand until they were bloody, his eyes filled with grit and tears, screaming just to drown out Sarek’s words about his worth (or lack thereof), screaming just to hear something other than the roaring of the crowd and the rush of blood in his ears.

He would rather tear himself apart for this broken fondness than hurt those that had brought him some measure of happiness and love in this twisted mechanism of life which he had taken for granted. He should’ve known better than to believe they truly cared, that anyone except for her had truly cared, that life might try and heal the mess it had made of him, stranded between two worlds. Maybe his heart was breaking and he would destroy them all in the process anyway as it exploded outward, but it wouldn’t be through his hands. Not by his hands.