lmao my best impostor round yet.

Desc: You and your new friends decide to a drunk Among Us game. You have lots of fun and you’re glad to be able to have amazing friends like them. After ending the stream and sobering up, Corpse asks you something you’d never thought you’d be asked.

Notes: i’m using these fake social media apps bc they’re fun &’ i like using them for messaging and twitterrrr! i hope you guys don’t mind them! <3

also, i’m super sorry for not posting in a while. my motivation comes and goes, but right now i have lots of it.

i wanna work on an smau series so, be on the look out for that! :))

“No balls!” Rae shouts, daring you to kill Jack who is trying to get something out of the vending machine, but him being drunk as fuck doesn’t help.

“I have three, actually.” You joke. Both you and Rae burst into a fit of laughter, but not for long since Jack goes up to you two.

“What are you two laughing about?” He asks, laughing with you guys even though he has no idea what he’s laughing about. Gosh, Jack, you’re really making it hard for me to kill you right now, you think to yourself.

“This,” You answer, killing him. You and Rae run away, screaming whenever you see someone. Thank God for everyone being drunk or else you two would be sussed out for being complete maniacs.

“Y/N,” Rae whispers. She gestures towards the green room and you can see Sykkuno watering the plants.

“No!” You whisper-yell. You’ve become Rae’s hitman, Brooke being the other Imposter. You need someone to vouch for you so, you don’t mind being by Rae the whole time.

“Hey, Sykunno!” Rae shouts when Sykkuno walks out. He’s slurring over his words, trying to say ‘hey’ back. Yeah, no way you’re killing him.

“See? Absolutely no fucking balls. Small dick, too.” Rae taunts. You want to kill her, but if you do, you’d immediately get voted off. So, you kill Sykkuno instead. It hurt, but you had to show Rae what’s up.

“How come no bodies have been reported?” You ask to nobody in particular, just wondering out loud.

“I’m good at hiding them.” Corpse jokes from behind you, scaring both you and Rae. Corpse knows how sensitive you are to any sound when it comes down to places that are quiet, and since only you and Rae have been together, his voice was the cause of your overdramatic ass scream. Playing along, Rae starts screaming with you two, the both of you being extremely obnoxious.

You know that he was just joking about hiding the bodies because Brooke is your partner for this round. You’re not even sure how Corpse isn’t dead yet.

“Okay, okay, I get it.” Corpse chuckles. “I won’t sneak up on you like that anymore.” You and Rae stop screaming, relieving Corpse’s poor eardrums of being blown.

Rae starts running around you in circles while you and Corpse are in the middle of a conversation. You know what she’s hinting at, but you decide to ignore her. You’re not going to kill Corpse.

“I have so many, Rae, you don’t even know, but I’m not gonna- I’m not gonna kill Corpse.” Good going, Y/N, you think to yourself. Well, now you have to kill him.

Corpse starts running away and you do everything your drunk ass can do to catch him and kill him. He’s laughing, running into walls, you doing the same. Finally, you’re able to kill him.

Rae catches up to your avatar, laughing maniacally. She cheers you on, knowing that’s the only way that you’ll continue to be her hitman. Jack, Sykkuno, and Corpse. You’re not even sure if Brooke has killed anyone.

“Brooke! Brooke, have you killed anyone yet?” You try to be quiet, but your shitface drunk and you don’t think that’s working.

“Okay, I’ll do better.” And with that, she’s off to go kill people.

“His body was in the hallway to Decontam… I think, don’t quote me on that.” Dream says, slightly slurring on his words.

“There’s 4 bodies and we’ve only found one? What the fuck?” Charlie sounds exhausted and you can’t help but laugh.

“Sorry,” You try and catch your breath, but once you do, you’re still giggling a bit. “Sorry, that was funny.”

Everybody else starts laughing and eventually, the voting time ends and nobody is voted out.

Wow, a tactic you didn’t even mean to use actually worked. It’s either because of how drunk everyone is or because of how contagious your laugh is - a lot of people call it cute and adorable.

You guys decide to end the game, everyone else ending their streaming while you just close your laptop. You all seemed to sober up towards the end, none of you wanting to drink anymore. Right now, you’d say you’re 85% sober. Taking a shower and drinking lots of water should have you good and all sobered up.

After taking a shower and getting a cold bottle of water, you lay in bed, watching random Minecraft speedbuilds of people building cute cottages.

You get a DM from none other than Corpse Husband. You smile to yourself before answering.

You wake up with a minor headache. Last night, you’d say that the Minecraft speedbuilds helped sober you up, but right now, you know it was the cold shower and cold water bottle.

You remember the text message Corpse had sent you, about wanting to check up on you. You two have only known each other for about a week or two now, and you two haven’t really talked. It’s nice, though - having someone who wants to check up on you. He’s done it these last three days you’ve played with him and his friends.

You text Corpse, telling him you can talk on the phone now. You both have been trying to plan to talk to each other just so you guys can get closer. You and Corpse relate to a lot of things and talking in Among Us with proximity chat and Corpse’s stream, it’s not the best way to have a deep conversation.

“Hi,” You greet him, placing your phone down that way you can make breakfast and talk to him. He wanted to FaceTime, and you’re not sure why because he said he’d be covering his camera. It’s fine with you.

“Good morning, Y/N. What are you up to?” A small yawn escapes his lips.

“Gosh, Y/N, want some pancakes with your chocolate chips?” He chuckles. You giggle, placing the phone back down and turning the camera to face you.

“I think we’ll have to test that theory.”

“You live like 2 hours away from me, how are we gonna do that?” You ask him, placing a pancake on your plate. You put more butter on the pan before putting more pancake mix on.

“I’d 100% drive two hours to your apartment just to try out your food.” He says. You smile at him, shaking your head and rolling your eyes playfully. “Speaking of going to each other’s houses, I have a question.”

He chuckles nervously, “Do you maybe want to collab?”

You’re caught offguard by this. You quickly put your pancake on your plate before answering.

“I’d love to.” You’re able to contain your excitement, surprisingly. “But Corpse, if you’re not comfortable with meeting me, we can find some way to do it over the phone. I really don’t think it’d be that hard. You could record your parts and I cou-”

Corpse cuts your rant off, chuckling a little bit. You smile sheepishly, taking a bite out of your pancakes.

“Okay,” You give him a small smile. “We can make plans later.”

“Good,” He says and you can hear a smile in his voice.

You and Corpse talk about anything and everything, alternating from really deep conversations to lighthearted, funny ones. Lots of laughing, but also lots of crying on your end. Corpse telling you that it’s okay and that everything will be okay is your new favorite thing. You never knew how much those two phrases would be changed just by coming from a different person. They never really meant anything when they came from anyone else - as much as you appreciated people reassuring you. But hearing it from Corpse, it really did feel like everything was going to be okay.

You two end the call, both of you being busy today. He promised to call you more often and you did the same.

Taglist:: Updating it tonight, comment or message me if you want to be added!

Ta da! Well, that among us art has been sitting there for a long time, so I decided to finish it up. Also, I would like to draw some blood on the right cheek (her right cheek) but I don’t know how the blood splat pattern will be like. Also, I don’t like blood, so I look menacing enough as an imposter.

Stills from a collab animation with @phantomnationdraws

Blackjack and Skylasha as crew (top) and imp (bottom) 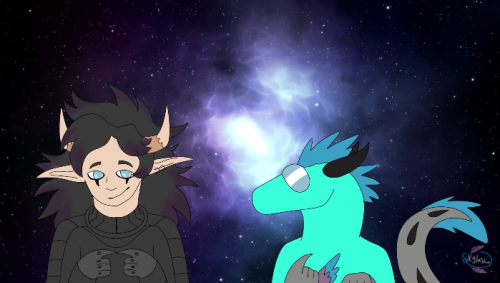 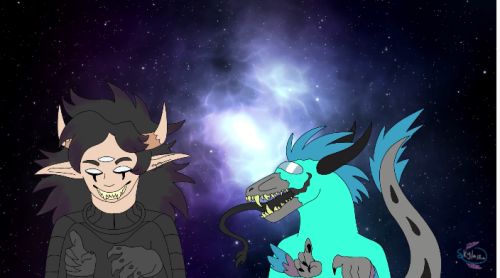 Aha! I actually remembered another dream! I was playing among us and I was the imposter, but for some reason I didn’t know it and I could still do tasks. People were literally slamming the emergency button to demand where the imposter was and why they weren’t killing people or sabotaging the ship and I was just. Merrily doing tasks in the background. People kept getting voted off the ship and it wasn’t until there were two crewmates left did I hear people screaming “WHERE IS THE IMPOSTER” “ARE YOU EVEN HERE” did I remember oh! right! I was the imposter! and I actually said “Sorry!” for not doing my job before I went after one of them and won the game

Cyan from Among Us is going to super hell for gay crimes and maybe for being the imposter!!! 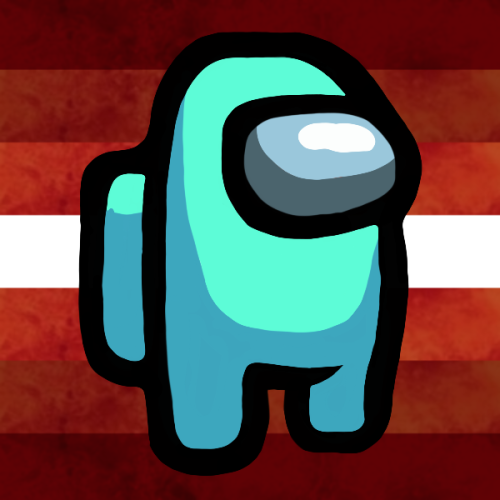 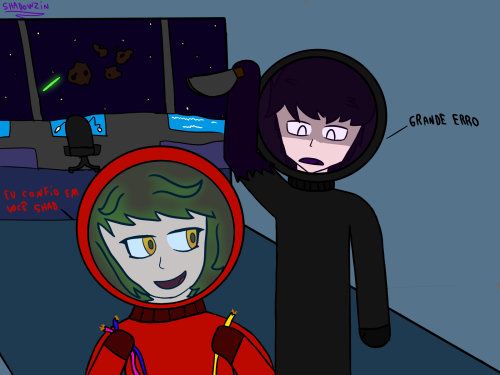 I run a small gaming Discord server meant for LGBTQA+ folk called “Gaymers” and we are currently looking to expand! If you’re into games like Stardew Valley, The Sims, Minecraft and Among Us, this is a great community for you!

We also have a small number of Twitch streamers that have used the server to grow their community and gain supporters, as well as multiple art/music/witchcraft/craft channels!

So if you’re LGBTQA+ and looking for new gamer friends, feel free to stop by and check us out! You can join here: https://discord.gg/j5dQj8G

Every single fucking Rushia Impostor round

HAVE MORE AMONG US ,MA OC (blue and white) Mac Taco Sheriff and his little crewmate “no name” YES THATS HIS NAME

and NOM NOM @coolboss13 whit his little babies  bumbum and pompom that drag no name everywhere they go ,including the vents, HOW DA HECK THEY MANAGE TO GET HIM INN, NO ONE WILL KNOW 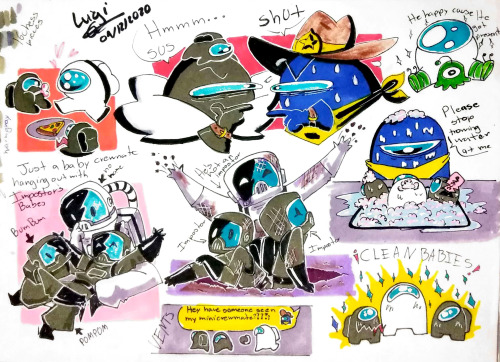 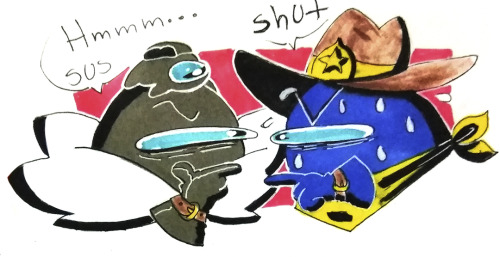 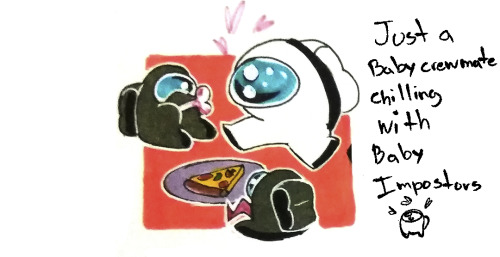 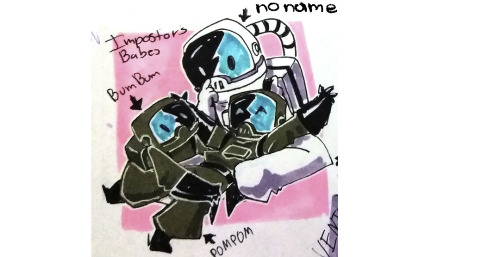 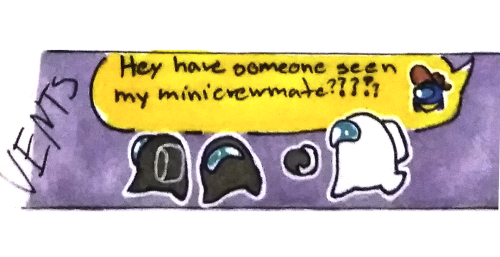 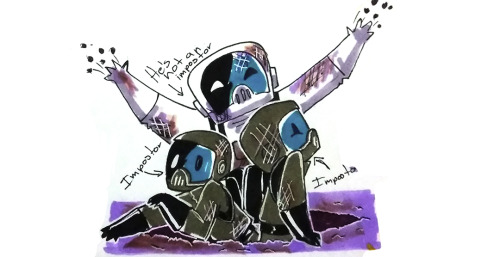 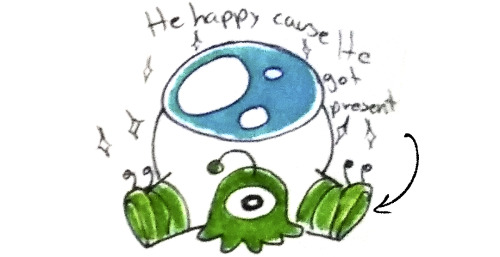 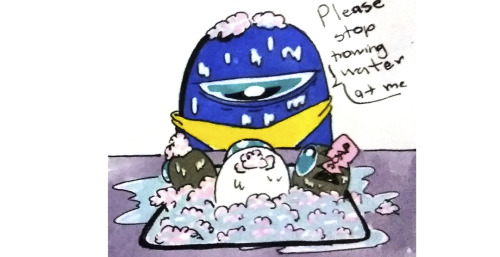 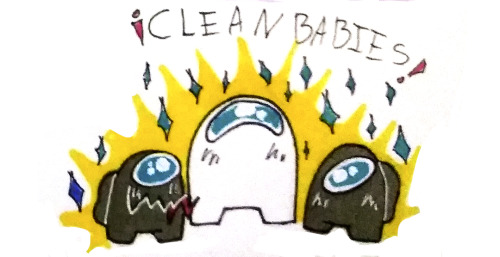 Some more doodles by art-mod, it seems Freddy wasn’t actually the imposter

Before the holidays I made some nice D bro sheets to stuff in presents being mailed out. Was also able to print some emergency stock for @rai-a-day ‘s Etsy which you can visit here:

Among us is a fun game.

Did some fan art of it.

Here is the Cyberverse Among Us crossover that I just made cuz that I found this on the 3rs Season and final episode called ‘The Other One” and that is why I recreated this scene where Optimus confronted Megatron X ever since that could have happened and also this purple dead body belongs to the normal Megatron. RIP Megs :(. 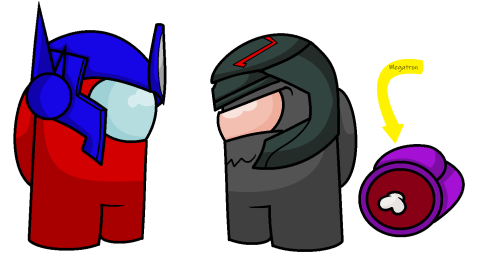 Random headcanon: the way dead bodies look in Among Us isn’t artistic license – the Crewmates really do only have one bone in their body, and you’ll never guess what it’s for.