Really happy with the toss animation so far lol

I promised myself that I’d revisit the research screen to hook up the inventory to the storage panel - now the panel in the top right actually tells you how many items you have in your ship’s storage, changes colour to red if you don’t have enough, and stops you from starting the research! I accept the research here anyway, but that’s because I disabled the item check - you won’t be able to do that in the real game! You will, however, be able to start the research without the required amount of data and collect that while it’s churning away. Progress will just halt if there’s nothing coming in.

You can also see in the bottom right panel, once the research has started, the bar scrolls through the various items’ icons you’ve put into the research as it processes them one by one.

Finally, before, on the research acceptance screen, I didn’t have any prompt and you’d have to know to press accept/cancel to exit the screen but now I’ve also put a yes/no selection in there just to make it super clear!

Oh yeah, I also fixed those equipment issues I was having - you can’t equip rocks to your robots anymore :/

Next time on the blog: more procrastination instead of doing UI design

My plan is to make an RPG with turn based battle elements but also action in the overworld quite similar to Mario & Luigi or Paper Mario. But with some systems inspired by Undertale & Deltarune

At this moment it’s just a prototype. There’s short explanation in the attached video, hope you can put up with my voice for 40 seconds.

I’m starting work on a new game! I think… something went wrong…

So today I wanted to get an arrow drawing script working, and you can see it demoed above. For this script, you specify the initial direction of the starting arrow, and a flag that specifies if you want the second arrow to be able to flip directions. I cycle through all combinations of directions and flip flags in the gif.

If flipping is allowed, when the coordinates of the second arrow are higher than the first, the arrow changes direction. If not, then the x,y coordinates of both arrows are flipped to maintain the same direction.

The script to generate this is pretty simple though there’s a lot of multiplication by negative 1 depending on various conditions. I also made the arrow head variable in size, with it shrinking as it gets closer to the perpendicular joining line. Obviously, the arrow doesn’t need to shrink if it never approaches the line, like when the arrowhead flipping is disabled.

This script will be used when selecting your party members, to show which slots are going to be swapped. It’ll also be used to show when you’re taking an AI out of storage!

I’m writing this little dev-log more for my sake than anybody else’s. My current project is a 2d platformer where you carry around a physics based plant that you can throw around and the issue I’m running into now is that both the micro and macro structure of the game (levels and story) are poorly defined. To illustrate, I’ll run through my current design process:

When I first thought of this game, I could clearly envision the core mechanic. It popped into my head after I heard the theme of one of the Ludum Dare jams which was ‘Keep It Alive’. So I pictured a little platforming character holding an oversized plant pot above their head and I immediately started programming.

After a day, everything was in place and I started throwing it around… and it was pretty fun! However, I thought I could improve on this by adding a secondary mechanic. So I gave the player the ability to teleport to the plant once they had thrown it. The best video game analogy for this is that it felt sort of like an overpowered ender pearl from Minecraft.

Yet despite the saying that games should be fun in an empty room (which my game was), it was definitely less fun without levels. But the problem was the the core mechanic didn’t lend itself to any particular level design. I’ll outline the problem. The core platforming mechanics are solid and fun, but you can’t really go anywhere just using those because whenever you pressed ‘space’ you would immediately teleport to the plant so all of your movement was made by throwing. However, the throwing was very difficult to get the hang of, as the developer I had mastered it but the few playtesters I got said it was nearly impossible to complete even the tutorial. So I was in a cheap pizza situation. I had tried the cheapest pizza available and liked it (no teleporting) but I had experimented with the more expensive pizza (teleporting) and thought it was much better but I couldn’t keep it forever.

Currently, the situation I have is that I’m going to “fork” (callback to the title) my game files and create 2 additional prototypes based the main one. One with no teleporting and one with a hybrid. The hybrid would have each level play as half collect-a-thon, half precision platformer with the player exploring a large space picking up seeds with no teleporting powers, and then plating a bunch of them to make a teleporting plant which will (in a very metroidvania style) allow them to reach places they couldn’t get to before and thus reach the end of the level.

In conclusion, I’ll check back soon and detail my progress.

Hey all! Apologies for the >1 week absence! I’ve been working hard on the party selection screen, but didn’t really have any exciting progress to show until today, so I thought I’d spare you guys the filler episode and skip straight to the good stuff!

Anyway, so the ui is totally not final but the main goal of the party selection screen is 100% functional! You can see me choose the manage party option, select an empty slot, then select a core to insert into that slot, and boom, party member added!

So to get to this step I had to revamp quite a bit of code which, until now, has been placeholder. As this is the first time I’m dynamically adding party members (rather than hardcoded) I first needed to make my party manger object persistent across screens. Previously, it was only present in the exploration screen. Doing that was simple, but I also needed some functions to hide/show the window at will, and same with the individual party member panels.

Speaking of those, I extended my code to make those panels less dependent on the party manager object. This is because when you are selecting cores from your inventory, I wanted a pop-up of the core’s stats to appear, without, obviously linking it to the party manager. So I was able to do that too, although I don’t demo that here! The goal of getting a standalone party panel was so the relevant data could be pulled in by the large character stats window that I showed off last time.

I had an amazing bug where, when I’d add a party member, it’d spawn copies of all existing party members. This is because I never actually checked previously to make sure that a party member’s object wasn’t there before generating it, since those were hardcoded to run once and once only!

Anyway, there’s still a bit of work to go, including swapping party members around, putting them back into storage (probably assigned to the data crunching mines…), and de-equipping party members when going into storage, as well as setting up the hotkeys to look at a detailed version of the character stats, and of course, designing a proper UI that isn’t cobbled together from (literally) 3 other interfaces.

Working on a new level and new enemy!

sneak preview of my new z-depth shader based sorting system. all depth sorting is now done on the gpu. 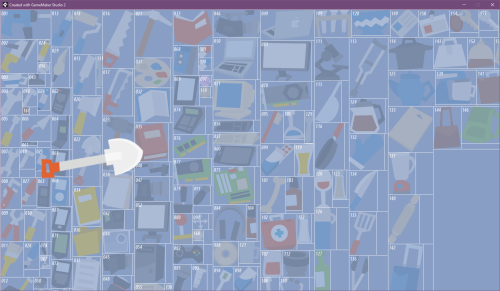 Great video explaining the pros and cons from many engines with the lenses of their features to build AI. It talks about techniques like behavior trees, navigation mesh, machine learning, NPCs and others. So it’s a great video to learn what are the current state from game engines in this subject.

The fabled base screen in action!

Here I’ve exported each of the layers in my base mockup as a separate png, and imported them into Gamemaker. I didn’t want to resize the canvas and place each object manually, so each item in the room is actually placed at 0,0 and is a big empty sprite. The size doesn’t matter because Gamemaker automatically culls empty space around sprites.

I then added some simple code to say, if the mouse is over the sprite’s collision box, put a highlight around the object. I said before that each sprite filled the size of the room, so technically all objects should be lighting up. However, I enabled precise collision checking on them, which means that only visible pixels count as part of the sprite, which is exactly what I needed here!

You’ll note that some things are selectable when they shouldn’t be (e.g. the cube table, ladder, and vent) so I’ll need to disable selection for those objects. I’ll also need to write some code that enables keyboard controls, and some detection code that will swap between keyboard and mouse based on what was last used.

Boss number 61, Joule is now complete! She will be joining the others in an update on May 8th!

Back when my original goal was only 36 different bosses, I already had Joule planned out. It only took me 3.5 years to get to her!

Showing off my little model creator

Some spraying of debris. Spray direction is roughly calculated by taking the displacement of the center of explosion from the barycenter of all affected pixels.

I have a confession to make: Sometimes I have more fun throwing together derpy placeholder art than I do making the actual final designs.

Anyway. Yeah. I figured out a neat and simple scrolly background thing and used it to make a simple starfield. Also you can do mouse things and there’s a custom cursor.

And YES, I am TOTALLY putting off figuring out expanding the text script to accommodate additional text strings because it sounds hard even though it probably really isn’t.

Ever work with Unity and think “boy, this sucks. Live reloading doesn’t even work half of the time”? Well ain’t I got a thing just for you! Introducing: GMLive for unity3d!