literally took me FOREVER but i finally finished! its not great but mehh… im not mad at it i guess

I used Avistella’s Template which you can find on their DeviantArt!

Omg i actually got one of these 🥺

“This is gonna sting a bit,” you warn him, as you do routinely with everyone that you treat no matter if they’re the smallest child or if they’re the strongest adult. “So, grit your teeth if you can and hold it together for me.”

He listened to your orders but you could tell that he was gritting his teeth just a smidge. Well, at least he was good at masking his pain. A sturdy guy like this was determined to show only the hard side that was fraught with nothing but professionalism.

You wouldn’t have ever assumed that he would be like this. Honestly, the last thing that you expected when you went out to work that afternoon was to find Jumin at the waiting end of your ambulance.

Well, it wasn’t the weirdest thing that had ever happened to you but it certainly took the cake today.

You weren’t going to ask him any details as that was up to authorities to chat with him about the incident, and your job was to make sure that he wasn’t too banged up.

He wasn’t that injured but he got lucky all things considered.

A few scrapes, some bruises, nothing that would really hurt him but he was lucky that he didn’t have a broken arm from the impact. You gently scolded him, but he was surprised to see you be the one to treat him. You sanitized what you could reach and dressed what you could, mind wandering to places where it shouldn’t have.

He could have gotten a lot more injured.

Jumin Han was a lucky man, a stupid man today, but a lucky man nonetheless. You sighed when there was the smallest tremor in his hand.

“You don’t have to pretend it doesn’t hurt,” you told him.

Jumin blew out a breath that he had been holding in for the longest time, and then looked back at you. “It isn’t becoming of a CEO to complain about such things,” he told you, sincerely, as if he was resigned to the lack of feeling. There was likely a lot of guilt on the back of his own mind given his actions.

You weren’t going to judge him.

“Everyone gets hurt and everyone has a right to cry,” you said with a firm nod of your hand as you wrapped his arm. “I’m not going to judge you for it if you do it, you know? I’m more surprised that you were able to keep such a stern face this entire time. The tough-guy act isn’t really becoming of you, that seems more up Zen’s alley.”

With a firm nod of your head, you leaned back in your chair and made sure that you had taken care of everything that you could. It’s not perfect but hey, at least he wasn’t dealing with road rash.

He wouldn’t need a hospital run as far as your examination told you but hey, it was up to him what he did. “I’ve done what I can. You’re really lucky you didn’t hurt yourself more, Jumin.”

“…Sorry to have worried you,” he offered, quietly.

You brush back a strand of hair from your face that had fallen.

“You should apologize to Seven, at some point,” you responded.“You did give me a scare. The last thing that I want to see when I’m working is any of the RFA, Jumin… I was… scared that it was going to be much worse and I… wouldn’t be able to do anything.”

Your tone is matter-of-factly but there’s a tinge of pain in it that you’re hiding underneath your sheer professionalism. The idea that any of the RFA could have been there in trouble and you couldn’t help them? That was the last thing that he wanted to do.

Jumin looks at you, “I see… I understand. I won’t do this again. I don’t wish to make your job harder.”

“I’m glad you’ve learned your lesson, then. I’m used to this, Jumin, but if you really wanna repay me, keep that promise. I don’t want to see anyone that I love, especially you, on the waiting end of my job.”

Sweet as sugar, cold as ice; hurt her once, I’ll break you twice.

Thanks for the req! A nice warmup :)

Imagine This song but its VxJumin and it’s Jumin singing about V.

And the music video but K.Will is Jumin and The groom and Bride are V and Rika respectively.

Now Cry with me 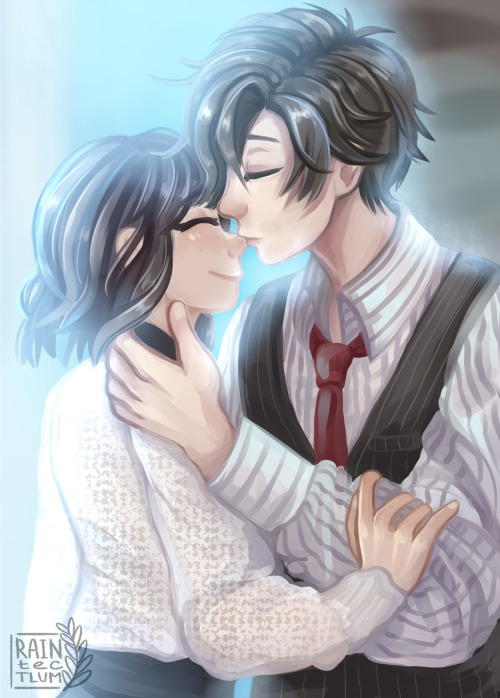 Kidnapped. Flayn had been kidnapped. There was almost no question about it. They hadn’t been hearing rumours about a dark knight stalking the streets of the town to not even consider the possibility.

Hello everyone!! Thank you so much for supporting my blog for the past few months. Without you guys, I would not be able to simp for our beloved hee hee man this much.

This is supposed to be a 900 followers special but I am an idiot and didn’t check the count and we are now at 940 but whatever. I would like to announce that I will now be writing for the other characters from different fandom as well. Don’t worry. I will still be writing for Muzan coz this blog is called Leon is a hoe for Muzan for a reason hhahaha.

So, the characters I will be writing and the rules for each of them are as followed! Please do ask away !!!

Disclaimer : I will or I will not write your request depending on whether it inspired me or not.

Things I would not write : Incest, Grooming, Pedophilia, X character fics and anything controversial.

Things I would not write : Incest, Grooming, Pedophilia, X character fics, and anything controversial.

Things I would not write : Incest, Grooming, Pedophilia, X character fics  and anything controversial.

Things I would not write : Incest, Grooming, Pedophilia and anything controversial.

no worries! thank you for requesting, this’ll be my last request for now! im closing requests for now because i wanna work on some fanfic that has been eating at my brain real quick lol. should be back open in 2 weeks ish (as of 5/20/20)

sorry these are on the shorter side again! i hope you like these! i tried to make these pretty general, but if anything i wrote is offensive/inconsistent/etc please feel free to let me know!!

… Apparently I never loaded this picture here back in the day???

Which is weird, because post-shower Jumin should be shared with everyone???

Art by Sake ~~ Visit my page for more info!
Please do not repost or alter my art. Share my original post instead! 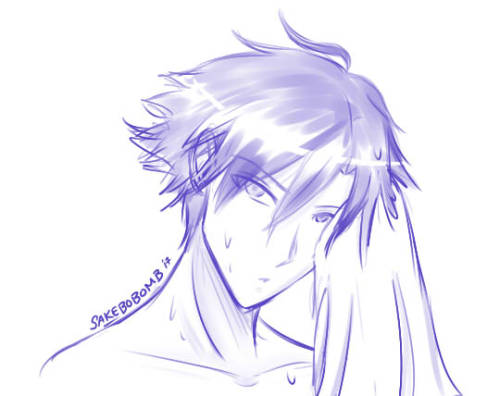 So, some time ago, I made this post about an AU where MC and Jumin switch life places, resulting in Jumin becoming a skeleton in Rika’s apartment.

Then I started playing Ray’s route, and witnessed Yoosung pretending to be Jumin in order to help Zen with his acting. That made me wonder what would happen if Yoosung and Jumin switched life places instead…

Yoosung obviously becomes the new chairman, and he gives Jaehee all the vacations. He falls in love with and marries MC. They still adopt Seven who has turned into a cat. Zen is still glad to not be hearing from Jumin anymore.

Jumin still starves to death and becomes a skeleton, just in Yoosung’s old apartment. Yoosung took his gaming equipment with him because he just couldn’t leave it behind and figured Jumin would find another way to occupy his time, such as… like… learning to cook or something. Yoosung continues paying the bills because now he can afford to. V occasionally visits Jumin, but of course still doesn’t notice that Jumin has died and has become a skeleton.

So either way, Jumin is doomed to become a skeleton. 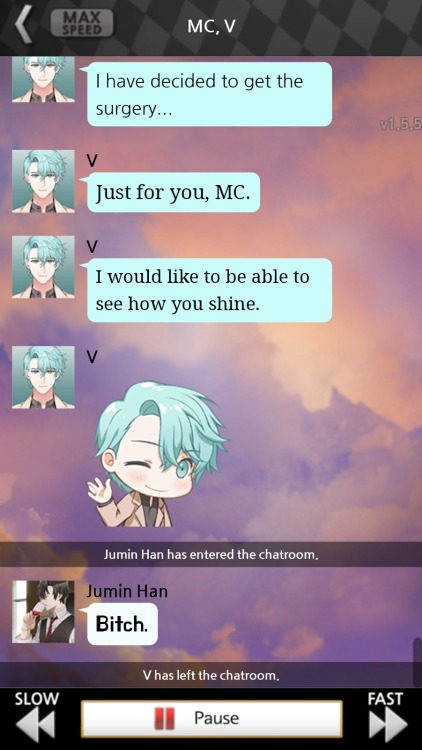 (He could have just dyed his hair black lol)

I remember seeing the CG out of context and thought that like… something actually bad had happened to Yoosung.

I’m just imagining like… Yoosung pretending to be super serious about all of this in the chat room and over the phone, but in person he can’t hold back the laughter and he and Zen aren’t making ANY progress because of it.