What Your Favorite Marvel (Avengers) Ship Says About You

HUGE shoutout to @runawaymarbles for helping me put this one together. Couldn’t have done it without you!!

Transcription below the cut

When Ayana Stark, a sweet princess of New York City, and Elena Rhodes, a carefree spirit of Calabasas, meet at summer camp they find out that they’re twins! But summer camp is to end soon and they want to see each other again and meet and bond with the other girl’s father.

Will the other girl’s father want and accept them? And can they put their heads together to delay the greedy, conniving Justin Hammer’s marriage to their Papa, Tony Stark, for as long as possible?

They’re up to their adorable cornrows and afros in schemes and tricks! Join them for an incredible adventure as they set off the Rhodes-Stark parent trap!

The thing was, it would have been logical for Rhodey to expect Tony to go first. The brazen disrespect for his own safety, all the strain he put his body through over the years, the dangerous situations he always wound up in. Frankly, it’s a miracle Tony survived his twenties, and that’s before he started saving the world on a regular basis. For all of that, though, there was something about Tony that made it impossible to imagine him not being around. The larger- than-life persona, the unceasing endurance and vitality he met every challenge with, the light that poured out of his eyes when he truly smiled, for all the world a miniature star burning in front of Rhodey’s eyes, illuminating everything and making it hard for him to breathe.

So no, he’d never considered a world without Tony Stark in it. His mind had never truly fathomed an obstacle Tony would not be able to overcome, a problem that could ever snuff out that light.

Even now, he still wasn’t sure it hadn’t all been a dream. Some horrible prank, or just a speed bump in the road that they’d be able to overcome, and then all would go back to normal.

How could this planet ever hope to get along with Tony Stark? How could he?

#iron husbands, #my writing, #oops my brain made a sad, #drabble, #in which rhodey ponders the impossible circumstance of tony stark's death, #death cw
100 notes · See All
goldenageofespionageText

Post info: Uhhh, this is super fluffy. Comes in at about 643 words.

A/N: Hope you like it. I think the writing style is a lil’ disjointed, but so are my boys.

Tony was tired. It had been approximately sixty-three hours, forty-nine minutes, fifty-six seconds and counting, since he had last slept. It was finals week, and he was getting his ass handed to him.

It wasn’t that the finals were hard, necessarily. He was a genius after all. But they weren’t easy, and the hours were taking a toll on his body. Rhodey liked to point out that Tony had kept himself awake for longer while on an inventing binge, but Tony counters that he’s in a zone then. He was most definitely not in a zone for finals week. And he decided finals would be what finally got him. Not the drinking, or terrible self care habits, or questionable sexual practices. Just good, old-fashioned college finals.

Rhodey would say he’s being dramatic. To that, Tony says “pfffbt”. Which is the sound that occurs when he blows a raspberry.

The only saving grace of his shitty finals season, was his secret admirer. At first, he had thought their dorm was doing a Secret Santa he hadn’t been aware of. It happened last year, and people were very upset with Tony for not participating. But no one else in the dorm was getting gifts. He would know, he asked.

Tony’s last final had ended about thirty minutes earlier, and he had gone straight to his dorm building. The plan was to stop by his inbox to check for a new gift, then head back to his room to Rip Van Winkle.

Walking into the room, he had his head down to look at where he was writing equations so he wouldn’t forget them after his nap. When he looked up, Rhodey was staring at him with a stricken look. For several moments, they were staring at each other in tension filled silence. Then, Tony registered what he was seeing.

Rhodey, his best friend, savior, and long-time crush, was putting a gift in his inbox. The same inbox that his secret admirer left gifts in.

“You weren’t supposed to be back yet. You always go to the lab after your 11:30 class. Why aren’t you in the lab?”

Tony, objectively, would find the situation hilarious if he weren’t so damn confused. Rhodey looked ready to bolt, hand halfway into Tony’s inbox.

“It’s finals week and I wanted a nap. For once in my life, lab time can wait.”

“Of course,” Rhodey murmured under his breath.

“So… you think my eyes are like sun-dappled whiskey?”

A loud groan was the only response Tony got. “Stop. Please. Lord above, this is embarrassing. You weren’t supposed to know it was me.”

While Rhodey looked morosely at the ground, Tony walked up to him and wrapped his best friend in a hug. “I’m glad it was you.”

Tony refused to look at Rhodey’s face while he spoke, pressing his forehead to the taller boy’s shoulder and speaking to his pec. “I’ve had the biggest crush on you since Freshman year. When you pulled me out of a fight with that stupid Senior.”

“I’m sure you could have, you little gremlin,” Rhodey said fondly while stroking the curly brown hair on Tony’s head.

“You know what I definitely could do, though, Platypus?” Tony fingered the fringe of Rhodey’s jacket as he spoke.

“Go on a date with you. But only after I sleep for approximately 72,000 years. Now take me to bed, please.”

Chuckling, Rhodey lifted Tony into his arms bridal style and carried him up to their room. Both boys could tell it was going to be a great holiday season.

Specifically marvel descendants and Star Wars fans. With regards to wanting lgbt characters. It IS something that’s sorely needed. But they kind of jump the gun to one conclusion. Then hold on to that when they’re proven wrong. And then they jump on these pairings that are just plain old bad while ignoring the good ones. With marvel people are obsessed with stucky and stony and iron strange even through it’d be bad for those involved while bypassing iron husbands and samsteve and whatever the name for Stephen x Wong is. And of course there’s m*lvie vs maljane. Disney DOES need to pull their finger out and grow a pair. But the fans don’t really help themselves but latching on to something they must know won’t happen.

It is something I never thought I need it

why this look like Tony and Rhodey were talking about whatever and then…this rando just appears.

Rhodey look like he’s ready to throw down for having the audacity- Tony just like “ yeah you’re ass is about to get kicked. Twice.”

Jim Rhodes has a special night planned for him and Tony before he leaves for the Academy; the weather doesn’t exactly cooperate.

#i never know which one is taller, #iron husbands, #al doodles
234 notes · See All
oh-my-hadesPhoto

“I fly high like my dad and party harder then my pa, if you gotta problem with that, I don’t give a fuck”

Summary: After being outed at school, Rhodey takes his life and potential relationship with his anonymous pen pal, Blue, into his own hands. He tells Blue and the world that he loves him and to meet him on the Ferris Wheel at the winter carnival if he feels the same.

A Love, Simon AU - Where Rhodey is Simon and Tony is Blue.

Rhodey sat waiting on the ferris wheel, going around the giant loop for what felt like the hundredth time. Up and down the ferris wheel went, Rhodey’s friends cheering and clapping with every rotation. Their little crowd grew larger as more people probably saw his impulsive tumblr post, declaring his love for someone he had probably never even met before. Most probably came out to gawk and see if he was going to get his heartbroken in public or at the very least get the scoop on who the other gay kid was.

God. The other gay kid.

He was still getting used to being out. He had been hiding this part of himself for so long, constantly fearing that he would say something or do something that would give himself away. He didn’t know what that could be, he was still Rhodey afterall and his sexuality didn’t change that.

He still wanted to go to MIT and eventually join the Air Force. He still put “Africa” by Toto on repeat in the mornings when he picked up his friends to annoy them, drank more coffee than any teenager should and secretly loved trashy daytime talk shows.

It was like his mother had told him. He could breath now. He was finally able to be more of himself than he had been able to be in the last four years, and he would continue being this way whether Blue showed up tonight or not. But he really, really hoped that he did.

What could he say? He was in love.

The Spidey-Barista logo for my AU 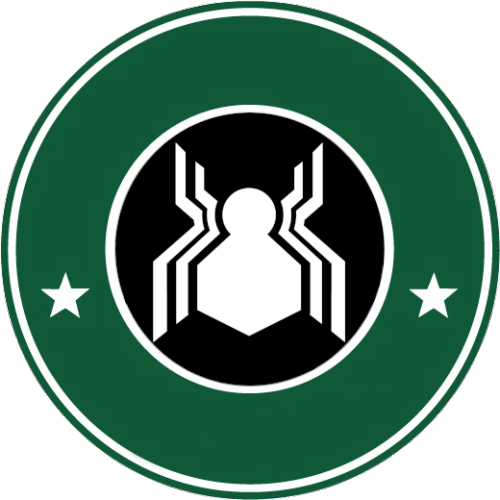 this is the second time ive posted this but can anyone help me find a fic im looking for?? it’s a Civil War Team Iron Man fic that’s 50 chapters long and has Tony/Rhodes and Wade/Logan. I think at some point Wade/Logan becomes Wade/Logan/Bucky. T'challa is also there. if it’s been deleted from the internet, id appreciate if anyone told me so i dont keep my hopes up

It’s my first time on here and I am here solely for the fanfiction and fanart! Would anyone be able to recommend some good blogs for the following pairings and/or relationships?

Drarry or Snarry (anything with a not-straight Harry Potter, really)

Loki with kids (his own or others’)

“I could really eat something,” Rhodey said, startling Tony from his revising. He stared up at his roommate, not sure why he’d told him.“Do you want me to bring something back for you as well?” Rhodey asked.

Tony looked around the lab they were in. “I didn’t bring any money.”

“So? I’m asking if you’d like me to bring you something. I mean if it’s important to you, you can buy snacks next time.”

So I had a dream just now where Tony and Rhodey had a fight and then Tony apologized and they gave each other a hug and Tony looked like he was gonna kiss Rhodey on the neck. And then Tony said “Well, it could be the last time you and I had sex. Or… It could be the first”

Now that I’m half-woken up it sounds weird, but it seemed like a super hot pickup line in the dream and the whole scene was so soft, and I feel the need to share it with you guys because it sounds like approproate tumblr content.