Wages go up, so businesses put their prices up- both because they need to and just because they can. Wages go up, so rents go up as well. Minimum wage probably has one big jump, and then goes up in small increments year on year. Rent and prices go up faster. And 10 years down the line, everyone’s right back where they started.

If you are going to have a system with money, I think the first step is to put price caps on essentials- like housing, food, clothes etc. Rents should be capped. Price increases should be capped. Utilities should ideally be nationalised and set at a certain rate.

No doubt someone will come along and say “where’s the profit”- but that’s the point. As long as there’s a system in place that profits from people’s basic needs, there will people living in poverty who can’t afford all of their basic needs.

I mean, I’d probably advocate for a non-monetary system over this, still, but if you’re going to try and paper over the cracks, I truly believe it has to come from both ends. Just giving people more money isn’t enough, because the money can reduce in value pretty damn quickly.

Once I was closing up the coffee shop I used to work at and this old lady comes over and orders a coffee and we tell her that we’re closing up and don’t get paid overtime if we close late and she says “back in my day, we did things out of the goodness of our hearts” like???? heart goodness doesn’t pay the fucking bills karen

If the majority of people don’t have money to spend, the economy will not do well. It’s not rocket science. 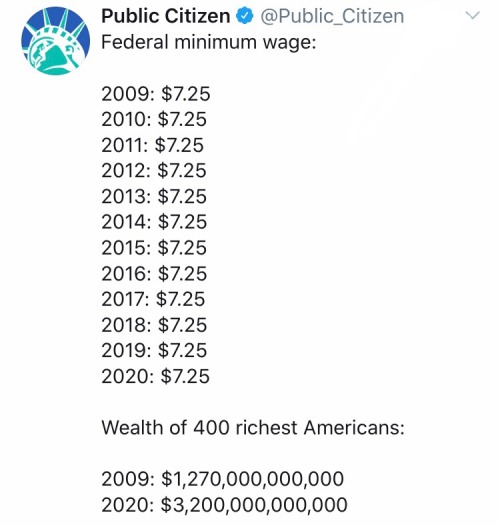 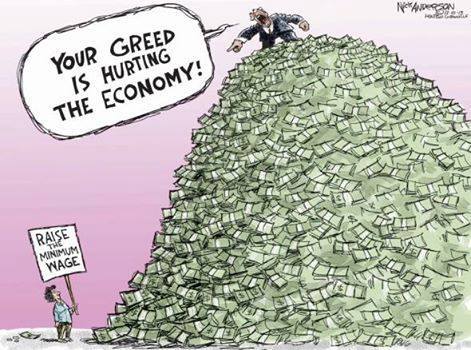 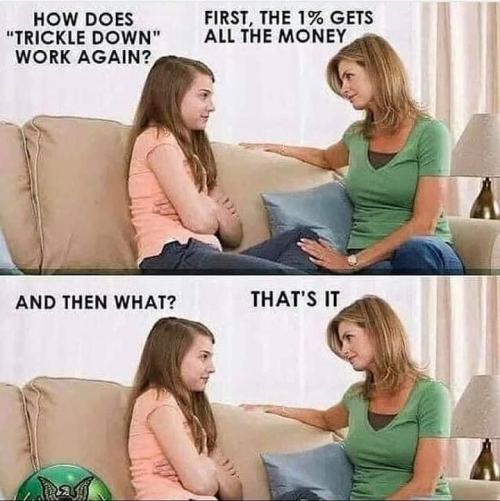 Here at our pool, male lifeguards are renowned for spending every 30 minute rotation off the guard stand in the bathroom. I’m bored and also curious, so I decided to do the math and figure out how many hours each year they would be earning money while hiding in the bathroom. Now, this will be very rough math just to come up with an estimated minimum.

Assuming they don’t work Sundays, so subtract 52 days for a total of 313 days.

Then because scheduling is usually wack, assume they get another day of the week off regularly. Subtract 52 days again for a total of 261.

Now, with rotations usually working on a 30 minute interval (not calculating for shorter ones during open swims), that means about HALF of every shift would be spent off the stand and in the bathroom. Dividing 1696.5 hours by 2 gives us a grand total of 848.25 hours of paid bathroom (phone) time a year. Going by just the current minimum wage in our area, that equates to $11,451.38 a year before Uncle Sam takes his share. (roughly estimated minimum)

I can’t think of any other job where employees can achieve that.

I spent nearly three years just smoking weed and trying to escape all this nonsense—America; the hypocrisy—but, I wasn’t able to get out.

I wasn’t able to break free.

I suppose I can slide some photos in here soon, but there’s no end to that. Body cam footage changes nothing (pragmatically) and protest photos have become photo shoots and terror-porn.

How many bodies have to stack up under the boot heel of this star-spangled machine?

How long will fools love their foolishness and loathe wisdom?

Is nobody else just flat-out o v e r this nonsense?

How much longer will cowards insist on pouring blood into a bottomless bucket?

Is there no more sense?

Have all gone to sleep?

My voice grows hoarse and my eyes, weary.

Sorry to be a jerk but could we please dispel of the notion that farmers are some sort of volunteers or saints in this country? They work incredibly hard and I am incredibly grateful for that. They do it for a living, for profit. I am also incredibly grateful for the taxi drivers who wake up at 3 AM to drive all day and into the night so they can put food on the tables for their babies. I’m grateful to the truck drivers who go weeks without seeing their families so they can make a living and provide for them. The teachers who spend their own money on supplies and curriculum plan into the late hours, throwing their hearts and souls into the advancement of their students. The waitresses who grit their teeth through another shitty tipper and smile forgivingly as children knock over glasses. The masseuses who scrape by but get happiness from knowing they improve other people’s well-being. The mail carriers who we overlook and take for granted, day after day.

The notion that a farmer’s vote should count 20, 30 times more than the vote of somebody living in a walk up apartment in the city is outdated and it is rooted in pure racism, nothing else.    That we all have to cater and defer to them at the expense of democracy is gross and weird.

It’s time to let go of this mindset. It’s time to vote for Joe Biden, take the house and senate with a commanding majority, and show the weird and gross Electoral College the door for good.

Anyone who says the wage gap and systematic racism don’t exist is fucking stupid.

85% of the employees at my landscaping company are white and we all make $15-20/hour. We’re the anomaly; most entry-level landscapers are people of color. It’s a common job among undocumented immigrants (I mean come on when was the last time you saw a landscaping crew that wasn’t mostly Latino)

But those companies that employ undocumented immigrants? You know, like just about every landscaping crew you see? They pay minimum wage. That means the Latino men doing the same job as me, right across the street, are getting paid HALF of what I get.

They aren’t “stealing our jobs”, and the very few white people doing these kinds of jobs get paid more in the first place. Their employers are the real enemy for underpaying them. Minimum wage should be $15/hour for EVERYONE. 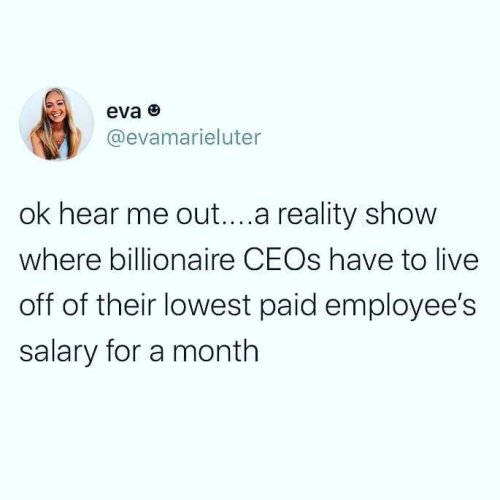 Change Your World To Change The World

You can’t help the poor by becoming one of them.

What if I told you that the billionaire class is happy to see you spending all your energy fighting for social change and political change?

They know that there is only so much that organization and letter writing and protests can do against well funded and well organized political opposition.

They also know that as long as you’re focused on some distant vision of changing the world, you’re not focused on developing your own ability to make your own money and shed your dependence on wage work.

You see, the thing that is much scary that some new government regulation is the idea that the population they depend on to exploit with low wages to drive their profits will realize that the Internet gives almost every American the power to launch their own business and make their own money.

Imagine what it would do to Walmart and Amazon and all the rest if every one of their workers learned how to make the same money they make it their crappy job with an online business.

So, keep working for social change. Keep trying to make the world better.

Take some of that energy to make your own world better. Improve your own situation, because the better your situation, the more resources you have to make everyone else’s situation better.

“What if, instead giving tax breaks to billionaires and massive corporations, we gave 40 million Americans a raise by making the federal minimum wage a living wage of $15 an hour?” - Sen. Bernie Sanders

Somewhere. Someone. Is counting the seconds until the help arrives. A single mum who’s house has been broken into. A daughter watching her dad hold a gun to his head. An aunt not knowing what drugs her niece is on.

Somewhere. Someone. Is in shock. The 30 years old who just became a widow. The once happy parents of a six month old. The sister who found her sibling losing to cancer too soon.

Somewhere. Someone. Is throwing on boots, and running to the squad. Hitting the emergency lights while pulling out of the bay. Hoping a car will stop so they can pass the red light.

Somewhere. Someone. Will see the blood left on the wall from the dead. Will hold that baby knowing that he will never breathe again. Will listen to the screams of family members in heart break.

Somewhere. Someone. Woke up at 2am to save a drug addict for the 8th time this year. Skipped dinner to go help a man with a stubbed toe. Missed holidays, birthdays, soccer games to answer the calls of duty.

Somewhere. Someone. Worked 25 years just to get PTSD and lose their job. Finally passed all their schooling and tests just to have a career ending injury on day 01. Mixed path with someone in such a hurry they didn’t stop for the flashing lights.

Somewhere. Someone. Left at 7am for their 24 hour shift. Made it till 3pm without lunch. Was hit head at 7pm by a car not paying attention.

Somewhere. Someone. Answered a call from a suicidal male. 5 minutes later was looking eye to eye with the man that would kill her. A mayday. Shots fired. Is being echoed on radios.

Somewhere. Someone. Make 16 cents more than minimum wage. Works 100 hours per week to pay the bills. Gives their life to others, to be paid less than fast food workers.

Somewhere. Someone. Will see their partner more than their spouse. Will skip more meals than they can sit down for. Will wake up more times than they get to lay down. 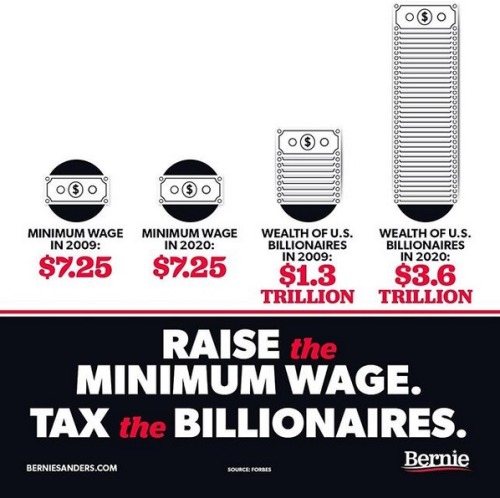 get back to work

These decisions aren’t small, they aren’t meaningless, to the people affected by them. Maybe you can look at this and say Biden is basically the same because maybe he won’t implement the $15 minimum wage he’s talked about, but I don’t think it’s the same. I suspect the people who’s wages could be cut because of this don’t think it’s the same, either

If there are jobs that have to be done but don’t pay a living wage, then the system relies on the existence of poverty.

Some people have never worked customer service jobs and it shows