Trending Blogs
#but whatever
dreamsequencerText

#this is incredibly niche, #but whatever, #ayreon, #the human equation, #ayreon.txt
3 notes · See All
avatarofthepiningText

gays really love to yell about respecting people’s pronouns and not making assumptions until they see a (seemingly) cishet couple. 🙄 just admit yall only care about people who are visibly trans and not at all about bi/pan people and move tf on.

#i dont have the energy to fully explain my anger at this, #but whatever, #k.txt
8 notes · See All
hteragram-xText

I like the idea of Rumus in the Babysitter AU looking (very much on purpose) like a stereotypical high school bad boy (just more fancy) which would probably mean he has a couple of visible tattoos.

(The bigger the contrast between his appearance and the way he acts around children - the better.)

But I’ve also mentioned before that at some point almost every kid he looked after wanted to be just like him and now all I can think of is all the children coming to him for temporary tattoos or asking him to draw something on their arms.

Only little Logan realized that what Remus has on his skin is permanent, but he couldn’t figure out for some time, how on earth did he do that. Roman also knew that Remus has these things on his arms all the time, because he barely remembers the time when Remus skin was plain, but it took him embarassingly long to understand that his brother is not secretly redrawing these pictures everyday again and again. (He probably tried to catch him retouching the tattoos on more than one occasion.)

Rick Allen - the musician that inspires me the most

Thanks for the ask! 💕

#good times, #but whatever, #who needs a yellow
0 notes · See All
galactic-camText

please don’t reblog. don’t percieve this at all actually

#okay so my hair is blue now, #and i’ve wanted to dye my hair for AGES but the blue was a newer descision, #i wanted it red or pink and then i just went BLUE, #and my hairdresser did NOT do the amount of dye i asked for, #or that she indicated she was going to do at the beginning, #i only wanted the bottom half of my hair to be blue, #but my entire head of hair is blue and i HATE it, #and i’m just. really upset, #because my hair is short i can’t just like cut it off, #so i’m stuck with blueberry hair for an undisclosed amount of time, #and i HATE it, #like blue is NOT IT for me, #and i was already getting more and more self concious by the day, #and now i look like that girl who turned into a blueberry in willy wonka and the chocoalte factory, #and everything is just 1000x worse now, #and i already didn’t like the way i looked, #and now it’s so much worse, #and it’s stupid that imm having a wholeass breakdown over something that i did because i was having a breakdown, #but whatever, #and like i KNOW it’s gonna fade eventually (like i haven’t even washed it yet), #but now it’s going to be bleached or fucking blueberry for the next year and a half, #and i cant do anything about it, #and to make matters worse the hair appointment cost an absurd amount of money, #and we aren’t poor but like, #we aren’t by any means wealthy, #like we’re well below biden’s tax raise line, #and we’re renovating the apartment which costs lots and lots of money because everything is FUCKING EXPENSIVE in NYC, #so i’ve been really guitly about spending money on things i don’t need, #and i definitely didn’t need to dye my hair blueberry, #and i DEFINITELY feel like a compete waste of money and time and energy
1 notes · See All
mewkwotaPhoto

I was thinking about Christopher Belmont this morning and loosely scribbled down how I think he might’ve looked when he was younger. The outfit was based on his appearance in The Adventure: Rebirth, which is (pretty obviously) derived from Richter’s classic sprite, so I took creative liberties to make it unique. I also tried to take some physical changes into account, so younger Christopher is thinner and not slouching as much (you see where Simon gets that).

Speaking of, that little thing on the side with Simon and Soleiyu was something I gave up on ages ago, but I chose to finish it now since parts of it still looked kinda nice. (His grandfather said it before, but Simon secretly likes having his hair stroked~ :D) 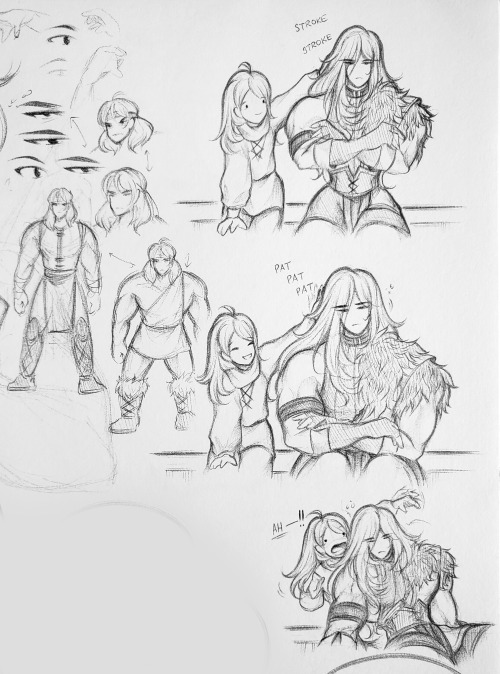 #I'm running out of free spaces in my sketchbook but I still draw doodle ahhh, #so I'm just rummaging through everything for a spot until can get a new one, #I'm too lazy (or busy) to go big on copy paper as of now, #but whatever, #we get more moments with simon's most-immediate ancestors ^^, #I really would've drawn more christopher but there is actually no room left on that page -sob-, #doodle-daas, #castlevania, #christopher belmont, #soleiyu belmont, #simon belmont
20 notes · See All
the-cacophonyAnswer

i made it myself, actually!

#anon, #yeah it's kinda shit, #but whatever, #the pretty girls makes up for it
2 notes · See All
times-like-theseText

My therapist is a genius oh my lord. So I haven’t been able to get ahold of a friend of mine for zoom/call for like 3 months (she wants to talk too but has been busy) and so my therapist suggested just FaceTiming or leaving a voicemail randomly without setting a time to talk first (because she always flakes) AND IT FUCKIN WORKED. She called me back like 20 mins later,,,wild how sometimes u just need to be pushy

#I hope this comes off right, #I just got to talk to my friend so yay!!, #although our FaceTime call dropped so we didn’t really wrap up on a good note, #but whatever
1 notes · See All
just-kinnie-thingsAnswer

#I love penelope scott sm, #this is my current favorite song, #which made it hard to pick, #so thats a whole ass bridge, #but whatever
1 notes · See All
virdityshattredText

- At The Beginning  by   Donna Lewis Ft:  Richard Marx

-   Meet Me On The Battlefield  by   SVRCINA

-  Saturn by  Sleeping At Last

-   Lady in Black by  Blackmore’s Night

-    King and lionheart  by  of monsters of men

- Please don’t say you love me by  Gabrielle Aplin

-  I Bet My Life   by Imagine dragons

#(( ta daaa)), #wish this was a little longer, #but whatever, #yay for music
0 notes · See All
hteragram-xText

(Mostly about little Logan and how he met Roman and Remus.)

[If you have any questions about this AU the asks are open.]

blink and wipe the dust from your eyelids. blink again. more dust. and again. and yet more. rub your eyes harder and the dust makes its way out at the corners even faster. little trails of grime that run down your face like tears. you reach up to wipe at your eyes again but you can’t find them anymore.

#my post, #suggestion, #suggtober2020, #2, #wither/degrade, #eye horror, #oops, #I didn't mean this to be quite so gorey, #but whatever, #well ig it's more implied
10 notes · See All
chenqingssuibianText

Wei Wuxian: Aww babe, you had a crush on me?

#wangxian, #someone has made this post i am sure, #but whatever, #lan wangji, #wei wuxian, #cql, #the untamed, #mdzs, #mo dao zu shi
30 notes · See All
scrawnycatraAnswer

3 years + i randomly posted many ficlets that i did… w spop i have been here like idk 4 months? djdjdjd and i am more strict w what i write now. aside from what’s already on ao3 i have like. one ficlet??? JDJDJDJ yeah remember the one time i took “prompts” and i wrote TWO (one was crackfic) and proceeded to not do. all the other ones i received 😔 they’re like buried now JFJDJDJDJ

#ask, #the urge to DELETE many things, #gjdjdjdjfjdjfdj, #but whatever, #i’ll just leave it djdjdjdj
12 notes · See All
memorys-skyscraperAnswer

Agh, I’m on Aether, otherwise I totally would!! And yeah it’s a weird chicken and egg problem with Discord, I don’t feel invested enough in the servers I join to be active for more than a few days, but the only way I’d get that invested was if I was consistently active for an extended period of time, so ¯\_(ツ)_/¯

At this point I’ve pretty much just accepted that Discord is not a great way to meet people for me personally, since I can only really see myself using it regularly if it was with people I already know

#asks, #seleniaflower, #normally my inability to be social online isn't a problem, #bc i can just hang out with people in person, #but uh...... covid, #so i find myself wishing i was better at it but not really knowing how to improve, #but whatever, #its small potatoes in the grand scheme of things
1 notes · See All
deepdigitalflexorText

Vexx/Lily
Vexx takes the princess to a bar and it goes better than expected (and then worse than expected).
2316 words

This might look familiar, since I’ve posted a couple different WIPs of it since July, when I started writing it lol.

There’s a second part, if I ever write it. In the back of my mind, I have the idea to write all of Vexx and Lily’s kisses out (there aren’t that many tbh) but we’ll see…

Vexx pushes the door open and is immediately met with the thick scent of smoke and sour beer. It’s nice to know that dive bars in all corners of Seleota, even the rich ones, are all the damn same. Lily doesn’t know that, though. She presses closer to him, eyes wide as she surveys the dimly lit room. With her dainty hand tucked into the crook of his elbow, Vexx guides her to an out of the way table.

“The floor is sticky,” she hisses as soon as she’s settled, pulling him closer with the grip she has on his arm. He snorts a laugh, gently freeing himself from her grasp.

“It’s a bar, Lil,” he says, as if that will clear up her confusion. “Sticky floors are part of the charm.”

“Gross.” She wrinkles her nose. A rush of warm affection unfurls in his chest, and he can’t stop himself from reaching down to curl a lock of hair behind her ear. She smiles at him, small but endlessly adoring, and he kind of hates himself for being so taken with her.

“What do you want?” He gestures toward the bar, lifting an eyebrow at her.

“I don’t know,” she says, huge eyes turning toward the display of colorful bottles with obvious curiosity. “I want to try everything.”

#andromeda six, #vexx serif, #vexx/traveler, #character: lily, #i always write vexx softer than he probably actually is, #but whatever, #A6, #my stuff, #¯\_(ツ)_/¯
7 notes · See All
helico-ptera-umbrarumText

#botober, #i’m not really happy with this one, #it was supposed to be a mashup of this year’s protests and ‘hell no we won’t go’ vietnam war protests, #but that’s all much more serious than ‘we really don’t want to’ sounds, #also people are not my strong suit drawing-wise, #but whatever, #i have now lost my head start and am actually doing these on the correct day; let’s see if i can keep this up, #artober, #i did an art
2 notes · See All
astral-rebirthText
#i'll probably get in trouble for threatening someone, #but whatever
1 notes · See All
vettelcoreText