Nines popped out from behind Gavin, wrapping his arms around his waist and putting his head on the detective’s shoulder, staring at their suspect. “I suggest you tell us what you know right now, or I won’t be able to stop my partner from doing what he’s thinking of doing to you.”

Their baby, Elysia, gurgled at her two fathers as she sat on the ground sucking on her chocolate covered fingers, the carpeted floor smeared and defiled by her ‘chocolate art’

#reed900thoughts#dbh#gavin reed#rk900#babies!!#nines was trying to hold back from smothering her with kisses
8 notes
peanutgrowls
Text

What’s with your face, Connor?

Nines as Baymax because Kamski and my OC wants to mess with Gavin. 😂😂😂

Authors Note- And look what we got here folks, looks like I’m back with Chapter Four of Gratitude. And this is where things will start to get dark as well. As you can gather this chapter will feature obsessive thoughts, non-con touching. Because our boy Daniel just can’t keep his hands off our sweet little reader. As well as original character death, and non-con kissing. If none of this is your cup of tea then this is where we will part ways, but I’ll remember out time fondly.

Now that we got that out of the way here is Chapter Four of Gratitude.

Connor and Nines at the slightest sign of deviancy.

would anybody be interested in making a MAP? as most things I do it would be angsty and connor-centric. the song is sweet hibiscus tea by penelope scott. itd have a storyline but I just came up with this concept not that long ago so Idk yet. If you’re interested just reblog!

Connor: I’ve decided to make amends with Gavin, so I went out and got him a tub of ice cream as a gift of peace.

sorry for the bad handwriting 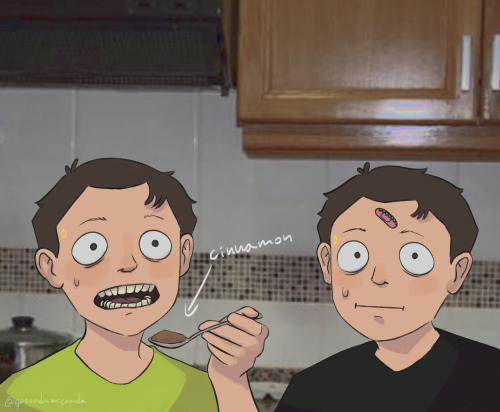 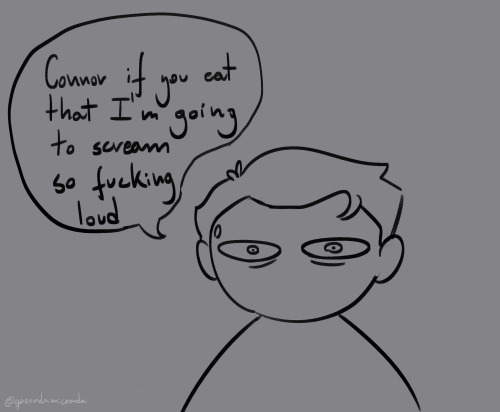 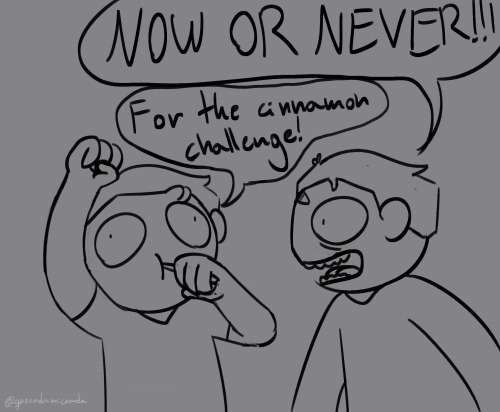 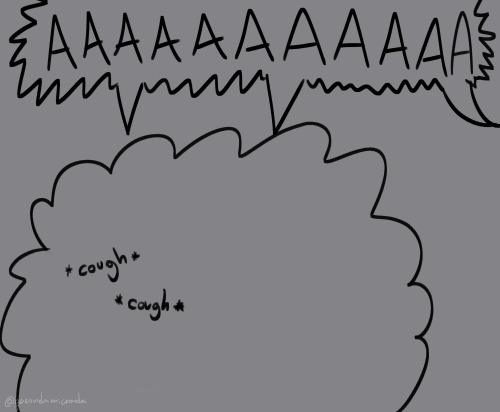 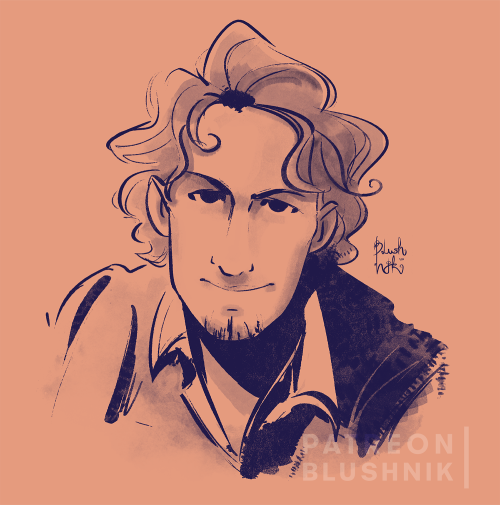 Slight trigger warning for alluded minor character death and Gavin spiraling a bit at the end.

“Do what?” Gavin asks. It’s a futile question because he knows exactly what the next words out of Niles’ mouth will be.

“Does it haunt you, your decision?”

“Yes,” Gavin says in response. The feelings welling up in his chest are raw, scorching, incomprehensible and he wishes fiercely to have never set foot back in this town. He turns his head away from Niles’ searching eyes although Gavin doubts it’ll be enough to hide him. Niles can read him too well even now. “Every single day. Every waking hour. Every time I’m left alone with my thoughts.”

“So why did you leave? Was I not- was I not good enough?” Niles asks and Gavin can’t help but catch his eyes again. There’s a fine sheen of moisture making them shine bright. The excess fluid accumulates into beads of saline which gathers in the corners of his eyes. “Is it because of what I am?”

“Oh, Niles,” Gavin murmurs and struggles to sit up despite the minor concussion warping his vision. The room spins before settling and Niles’ hand is an inch away from touching him. A privilege Gavin has selfishly offered to everyone but him. “I’m the one who wasn’t-” ‘enough.’

He bridges the last colossal gap between them and clasps Niles’ left hand in his own. “You’ve always been just Niles to me; nothing more, nothing less. You’re a far better person than I,” Gavin says with a mirthless chuckle as he leans his forehead against their intertwined hands.

The fingers of Niles’ unoccupied hand come to rest against his cheek, their pressure lighter than a feather’s.

“Then stand by my side. Be with me, please,” Niles whispers and tilts Gavin’s head up. Blue eyes like driftwood flames, alluringly beautiful, meet Gavin’s own. He finds himself mirroring the way Niles has a hand on his cheek and they drift closer, closer, closer still. When they’re almost touching, lips against lips the way they used to when they were young, Gavin moves his thumb to rest against Niles’ lips. He’s near enough for his own to brush against the back of his thumb.

“Why not?” Niles asks in a whispering wail. “Renounce your God and I’ll forsake the path laid out for me. We could be together.”

Gavin lets out a breathless sob. “I can’t. It’s all I have.”

‘And you’d grow bored. You’d see what a mess I am. You’d regret your decision. You’d come to despise me and what would I have then? His love is extended to wretched folk like me and His grace is eternal. I’ve made a promise in exchange for forgiveness.’

“I have never once regretted loving you even when it hurt,” Niles says, low and sincere. “Even when your words are daggers in my heart. Even if you were to choose someone else in the end, I’d love you.”

“Why must you make this so difficult?”

“Because the path you’ve chosen has not made you happy,” Niles says, voice cold. But beneath the ice and jagged edges there’s a slight waver. “Because you deserve better than self-flagellation. You deserve better than denying yourself happiness for a split-second decision made in your past. You have atoned.”

“You can’t say that.” Gavin’s voice trembles and he tears himself away from Niles’ hands. “That’s between me and God.”

“Did the Son not die on the cross to wipe humanity free of sin? You feel remorse and guilt and regret. If your God is cruel enough not to forgive an honest mistake, a child’s mistake, why would you follow Him and His word?”

“That mistake got someone killed.”

He welcomes the dreams of pale skin moving against his own since they filter away the sight of crimson seeping into the grout between tiles, the horror he’d felt, the piercing scream of his mother.

Niles’ cold hand settles over his forehead and suddenly Gavin knows nothing at all.

He loves how it looks on his ruggedly handsome face as they tease and insult each other. He loves it when it was directed at him, genuine and carefree. He loves when they communicate with it. But most of all…He loves the smile Gavin Reed has when they were bringing hell upon their enemies.

1. He can’t move. He was pinned down. If he moves, it feels like the world itself would end.

Gavin returned from the bathroom to the sight of Nines’ LED flashing red, “Nines? What’s wrong.”

Nines slowly turned his head to face him. “Your cat is sleeping on my lap and if I wake her, it will disrupt her deep sleep. I don’t want that.”

2. He can’t move yet again. Though he loves the situation with Gavin sleeping on his arm, their legs tangled between the sheets and his detective sleeping deeply and soundly with his arms around him. The cat is sitting on the side of his head, meowing and demanding food.

I ended up redrawing then colouring it… then adding an aura & background too lol. 😅

But here you go Anon! It was fun for me to make so I hope you enjoy it 👍

The greatest of these is love

Loved drawing this part… Hope you’ll like reading it ❤️

PS : The idea that God wants a clergy man to spend his love another way is coming from The Sound of Music. Probably my favorite musical, I watch it every now and then since I’m a kid, and I love it.

Also, big big thanks to people commenting and reblogging my art ! ❤️ 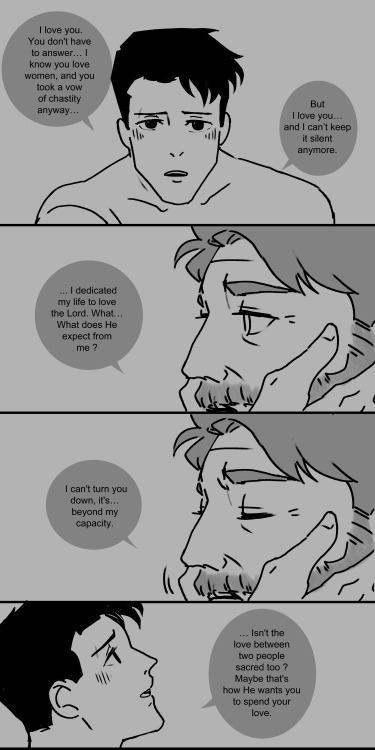 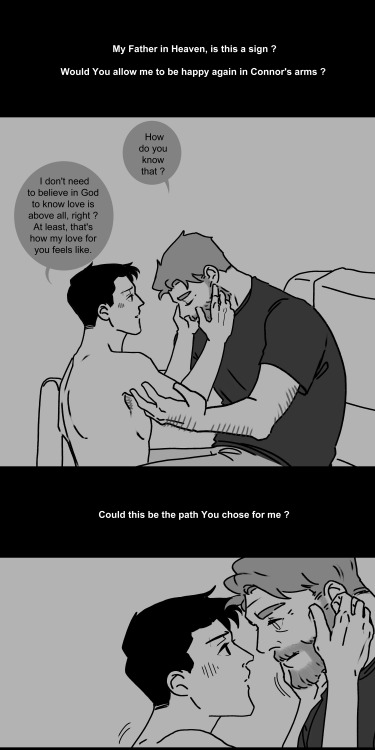 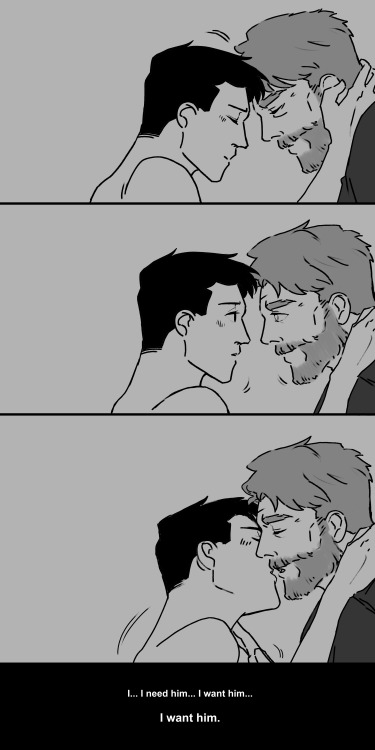 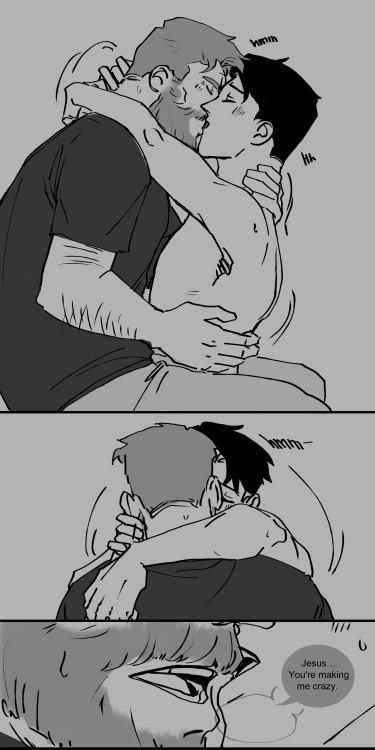 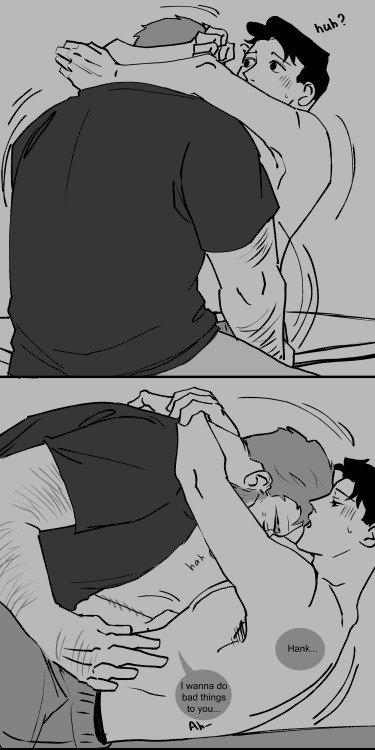 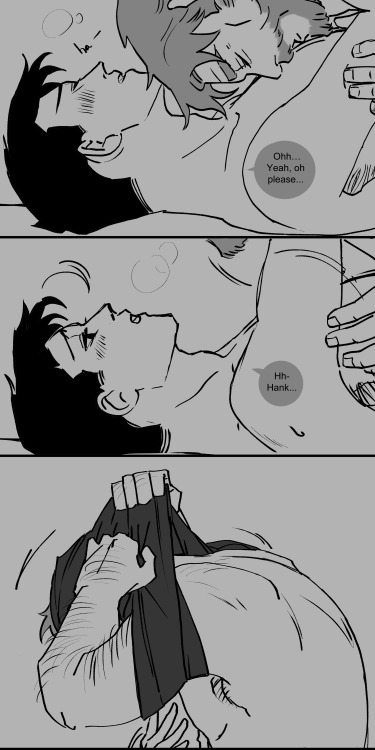 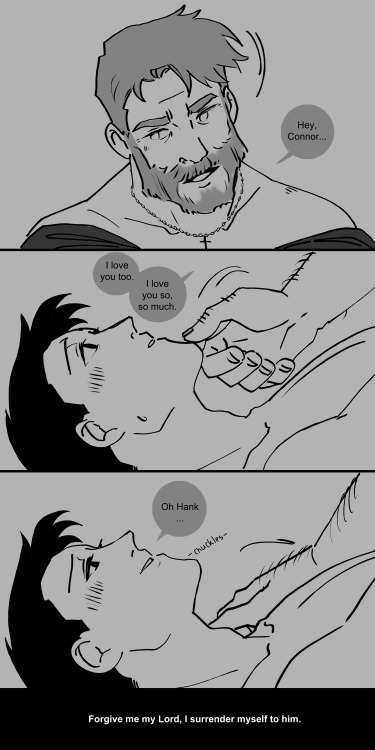 Read the full fic so far on Ao3 here!
Description: It’s 1885, in the height of the Victorian era.
Gavin Reed, a gruff former American frontiersman turned detective, struggles to navigate the complex social structures of Victorian London. He works with a secret team of unusual people to investigate common issues of the era: Tina Chen, a crossdressing lesbian detective disguised as their secretary; the ever-hidden Inspecter Fowler, a secretive and brilliant mastermind who remains out of the public eye due to his risk of persecution; Hank Anderson, a deeply traumatized investigator with a dark past; and a young man named Connor, who seems to have connections to a relentlessly tricky criminal underworld.
As the case progresses, Gavin gets closer and closer to unraveling the events around a strange organized crime leader who goes by the nickname Nines…

Two men stood outside the pub, low-lit, their faces covered in the darkness.

“Any news?” the first asked. Even hidden, he was intimidating– a composed spectacle of a man, graceful and dark.

“Some,” the second replied, the voice strangely high. “They’ve hired an American.”

The first snorted. “I’m not sure what use that’s going to be.”

The second shifted. “Don’t get overzealous. Lesser men have brought down stronger foes than you.”

“Of course, but they were not American.”

“This is not a time for jests. If I’m discovered–”

“My position is already precarious as it is–”

“Your position is secure.”

“You’re valuable to the coppers. They’ll leave you be.”

“My position is not half as invulnerable as you make it seem.”

The first man smiled. “Yet you still possess it.”

The second huffed. “I don’t have time for foolishness. The consequences are steep and some, sir, can afford them more than others.”

“Consequences are a natural part of life.”

“As is death,” the second man remarked as he turned away, “and yet we all prefer to avoid that .”

The first man reached out a hand. “Wait.”

The first continued. “I apologize, I shouldn’t make fun. Please, tell me what you know of this American detective.”

“No rumors drifting about?”

“He likes to drink, but what man in Scotland Yard doesn’t?”

“I see.” The first man mused over this.

“They say he has ideas about how things should be done.”

“What sort of ideas?”

“The peculiar kind. The unconventional kind. He’s something of an… eccentric. They say he hates how the brass is run.”

The first man snorted. “Well, he’ll be at home in the pubs, then.”

“ Goodbye, sir,” the second man hissed without humor, and faded into the night.

The first man leaned back on his heels, and, deep in thought, followed suit.